Go to the grave knowing your last ride is as green as possible.

Folks who die in the United Kingdom can arrive cemetery in an electric car with the Eco-Hearse from the funeral directors at Leverton & Sons. This specially converted Nissan Leaf is an unconventional way to carry a casket, but it would probably be the perfect final ride for celebrating an especially environmentally conscious person.

Brahms Electric Vehicles from England performs the hearse conversion for the Nissan Leaf. A transparent panel replaces most of the side of the vehicle, and it allows mourners an easy view of the coffin. The deck for carrying the casket extends practically the entire length of the vehicle, and the driver is actually sitting right next to it. A motor even tilts the coffin downward for increasing the view out the side for the person behind the wheel or upward for easier unloading. Safety is probably the last thing you think of for a hearse, but this one has horizontal crash beam with and airbag sensor on the same side as the deceased. 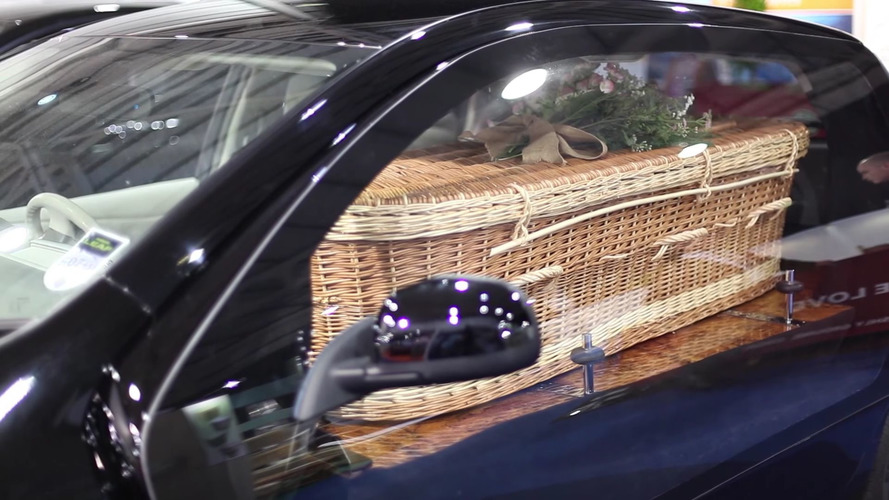 According to Green Car Reports, Brahms has built three Leaf hearses and sold two of them. The company performed the conversion on used examples of Nissan’s EV, which also let the firm sell them at a lower price than a conventional funeral vehicle.

Brahms isn’t the first company looking to carry a casket in a greener way. Last year, a Dutch firm unveiled a highly modified Tesla Model S hearse. The company extended the roof and added 31.5 inches (80 centimeters) to the wheelbase so that a coffin would fit more easily inside. A higher roof and glass sides let mourners see inside.

While not as green, other European firms also offer unconventional ways to take the final ride. For example, last year an Italian company showed off a Maserati Ghibli hearse that looked like a fun way to arrive at the cemetery. Biemme Special Cars from the same country has been converting Rolls-Royce Phantoms for several years as an extremely opulent way into the great beyond.