Will our Motor1.com editors be talking to each other after this head-to-head debate?

Ford surely knew it would make some die-hard fans unhappy when it decided to use the Mustang name on its new electric crossover. Bastardizing the Mach-1 name into Mach-E might be considered bad enough, but Ford took the extra risky step of actually calling this crossover a Mustang. Some, like Mustang owner and Motor1.com writer Christopher Smith, think it was a terrible decision. Others, like EV owner and Global Editor-in-Chief John Neff, believe it was a brilliant decision. On this week's episode of the Motor1.com Podcast, we bring to your ears the argument these two have been having all week: is the Mach-E an affront to Mustang enthusiasts everywhere or did Ford just make a genius move?

We've done episodes like this before where editors square off, but last time the editors didn't step up to the mic with pages of notes in hand. These two did. The debate that ensued is a fascinating look at two completely different perspectives about cars, particularly the Mustang. Is it merely a brand, or has the Mustang evolved into an idea, the Platonian ideal for which has fixed qualities that cannot be violated? Oh yeah, school's in session, and one of these guys majored in Philosophy.

After the editors agree to let bygones be entirely wrong, they move on to another EV that's made a big splash this week: the Tesla Cybertruck. The truck was mere hours away from being unveiled at the time of this episode's recording, so the editors had no idea what sci-fi bombshell Elon was about to drop. 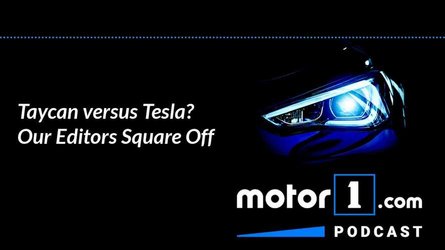 Lastly, our two hosts talked about this week's L.A. Auto Show and their favorite debuts. Smith chose a gorgeous drop top and even more gorgeous concept, while Neff kept things real with two choices you might find in your own garage soon.