The 2020 Mercedes-Benz GLS Is Surprisingly Good Off Road 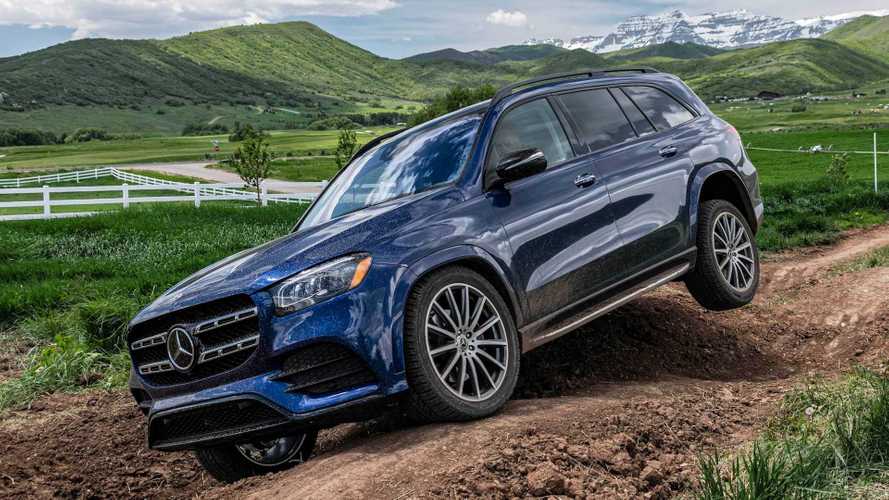 Other crossovers have their work cut out for them.

Unibody crossovers typically can't compete off road with body-on-frame SUVs. But German engineers figured out a way to make the unibody 2020 Mercedes-Benz GLS uncharacteristically capable on the trail, without sacrificing on-road comfort and ease of use at the same time.

In order to test the complexities of the GLS, your Floridian author traveled to a state with more dynamic topography: Utah. There, the twisty pavement between Salt Lake City and Provo eventually gives way to a public off-road course that could test the limits of the GLS. The 90-minute-long trail, littered with steep, rocky inclines; mud puddles; and an articulation section, push the Mercedes past what we previously thought capable of a three-row crossover.

The trail starts out easy. Dialed into its second-most-capable setting, “Off-Road,” the twin-turbocharged, 4.0-liter, V8-powered GLS 580 tackles a gradual gravel incline with ease. With the accelerator pressure at about half, the turbocharged V8 yawns as it works with an electric motor (dubbed EQ Boost by Mercedes) to pump out the perfect amount of its available 516 pound-feet of torque. All four wheels grip the pavement via the variable 4Matic all-wheel-drive system (standard on the 580), and the nine-speed automatic never skips a beat – or more importantly, gear. A big reason why Mercedes decided against a dual-clutch transmission is because of the benefits to off-roading and towing (up to 7,700 pounds) that a transmission with a torque converter and planetary gears provides. And it proves its merit here.

The Benz barely shrugs up the (at times) 15-degree, twisting slope. The adjustable air suspension – electronically lifted one level out of three – protects the stronger metal underside from occasional large rocks and steep angles. The overboosted, too-light steering is the only downside, and it renders barely any feedback from the gravel to the driver's fingertips. But that doesn't deter us. In mere minutes we're at the flat stopping point near the top of the course. The GLS is covered in dust, but it's only more dirt – and mud – from here.

As the trail toughens, the GLS gets better. In Off-Road+ mode, now utilizing a two-step transfer case with an on-demand torque function and a reduction gear designed specifically for the tough stuff, the three-row crossover toughens up. In order to traverse deep puddles that challenge its maximum 23-inch wading depth, we electronically lift the GLS up to its third and highest suspension setting. Here, it increases the maximum ground clearance to 8.5 inches. Rockier inclines, designed to punish less-articulate alternatives, give us a small sample of the GLS's lateral torque vectoring abilities. The Benz quickly sends up to 100 percent of torque to either the front or rear axle at any time. Twisting, blind declines, meanwhile, leave hardly a scrape thanks to the GLS's forward-facing trail camera (available at speeds of up to 10 mph), which improves our forward view.

The only thing not on the docket is Rocking Mode. Since there’s no deep sand on the course, the “jumping” feature designed to un-stick the GLS from dunes doesn’t apply. Instead, we turn it on in a parking lot. We can confirm one thing: it’s fun. Here’s a better idea of how Rocking Mode works in its element:

Credit the advanced E-Active Body Control system for the GLS’s off-road chops. Granted, this tech isn’t entirely new – Mercedes introduced it first on the GLE. But on Benz’s biggest crossover, the adaptive air suspension, aided by a 48-volt electrical architecture, gives the GLS some of the similar capabilities (including things like rock crawling and wading) to the body-on-frame alternatives. It’s seriously impressive stuff for such a large vehicle.

And here’s a fun little parting piece. To show how capable its crossover truly is, Mercedes included an “off-road score” within MBUX. The off-road score determines things like proper approach angle, throttle modulation, steering, and braking, adding to or detracting from the score based on what the GLS deems successful progress. Or more notably, how good the driver is at off-roading. It's an amusing feature that enhances the already capable crossover, and frankly, unlike anything we’ve seen on other capable vehicles with off-road inclinations.

While, yes, the GLS lacks some of the same kit that makes its sibling, the G-Class, such an off-road icon – body-on-frame construction, a genuine low-range gearbox, and locking differentials – don’t discount it as simply another soft crossover. Advanced technology like E-Active Body Control and EQ Boost (which we haven’t seen on another modern three-row yet) make up for the absence of old-school off-road cues. So, for the few that attempt to trail their six-figure Mercedes SUV, take solace in the fact that it’s completely capable.