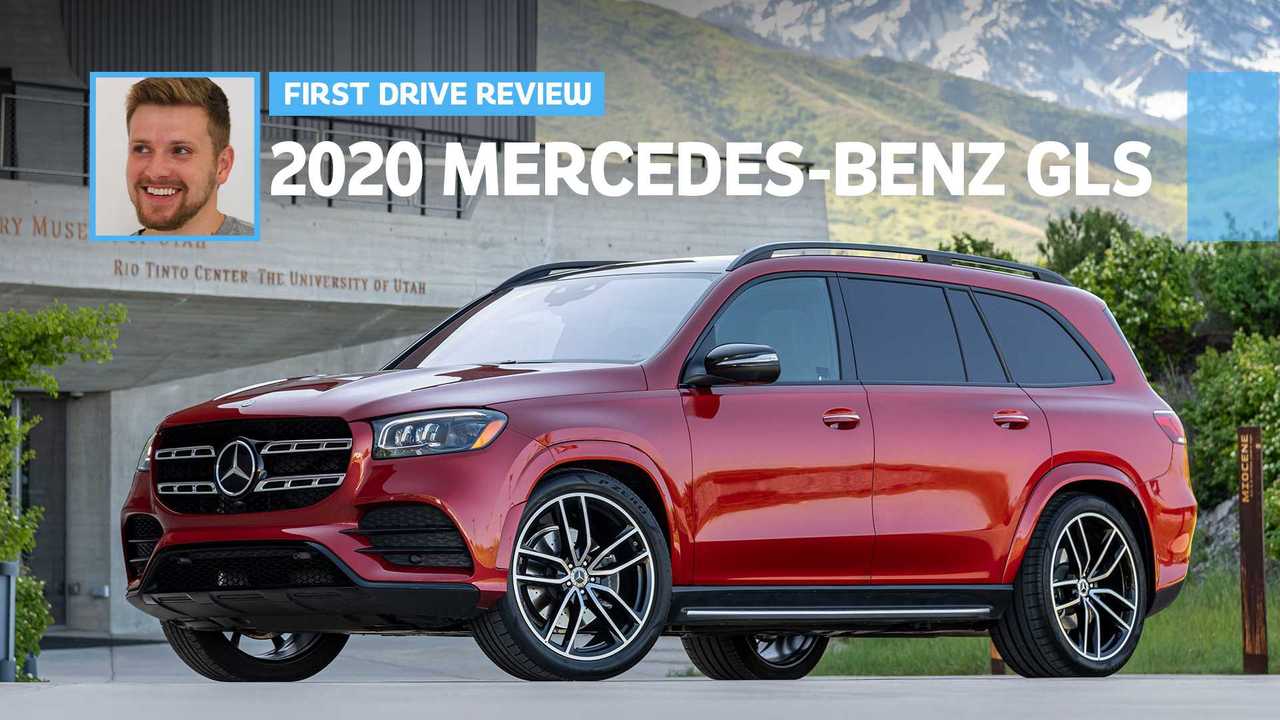 A tech-laden crossover that schools its competitors where it matters most.

Few highways encapsulate the ideal American road trip better than the mountainous pass between Salt Lake City and Provo, Utah. It’s a gorgeous stretch of road, dotted with grassy fields at its base and lined with snow (even in early June) at its summit. But it’s a trip made more complete by a vehicle practically built for long journeys: the 2020 Mercedes-Benz GLS.

The new GLS doubles down on the large, unibody three-row crossover craze it helped establish more than a decade ago. Now, with more advanced tech, hugely improved style, and engaging dynamics borrowed from its other tri-star siblings, the GLS schools its classmates virtually all around.

The GLS isn't a supermodel style-wise. But against its closest competitor, the over-the-top BMW X7, and more truck-like options like the aging Cadillac Escalade, and opulent Lincoln Navigator, the GLS's sharp, subtle cues strike the perfect medium. Its innocuous family fascia and tapered LED headlights appeal to a broader audience than, say, the X7's gargantuan grille. And with the AMG Line package and stunning Designo Cardinal Red paint (our favorite look), the GLS's optional black accents, functional front vents, and massive 23-inch wheels make it all the more compelling.

Inside there's much more to catch your attention. Two 12.3-inch screens are the focal point, flanked by multiple squircular vents, varying material surfaces, and a single LED accent light bar that extends from one side of the cabin to the other (it’s part of the optional ambient light system).

Feel free to roll your eyes when Mercedes says the GLS is "the S-Class of SUVs." Though, it’s a fair representation. The front buckets have excellent bolstering and high-grade, soft leather, as you’d expect. But the second row, with the optional Executive package, offers the best seats in the house by far. The couch-like cushions put the backseats of other so-called “luxury crossovers” to shame. A center-mounted 7.0-inch Android tablet (part of the Executive package) provides passengers with access to the entire Mercedes-Benz User Experience – or, MBUX infotainment system, including navigation and radio controls, as well as the same comprehensive massage functions as the front seats.

While it feels more spacious than the X7's rear-most seats, the GLS’s third row is still too tight for the average adult.

Some of that same comfort carries over to the third row, but, while it feels more spacious than the X7's rear-most seats, the GLS’s third row is still too tight for the average adult. Prepare to have your knees buried in the back of the second row. To amend this shortcoming, Mercedes offers a heated option, four USB-C ports (part of 11 total USB ports in the cabin), and an electrically activated, forward-folding second row, which makes ingress and egress easier.

Throughout the cabin, leather, wood, and aluminum cover every surface at eye level, while an optional silky smooth suede headliner sits overhead. We searched far and wide for hard plastic but found little, most of which is out of sight and reach.

Prospective buyers have two GLS trims to choose from: 450 and 580. The base 450 model borrows the turbocharged 3.0-liter inline six-cylinder engine found elsewhere in the range, while the larger 580 gets a twin-turbocharged 4.0-liter V8. Frankly, both engines are fantastic.

The turbo 3.0-liter inline six makes 362 horsepower and 369 pound-feet of torque. It’s the less powerful of the two on paper, but aided by an integrated starter generator (dubbed EQ Boost by Mercedes), it’s unintimidated by the GLS's impressive heft. It takes the GLS 450 a mere 5.9 seconds to hit 60 miles per hour.

Compared to an X7 powered by an engine with the same displacement, the six-cylinder GLS treats speedy straights like less of a chore. A steady power band (again, thank EQ Boost) equates to more low-end torque and additional power higher in the rev range. Technically, the GLS is a tenth of a second slower than the BMW to 60 (5.8 seconds), but it doesn't feel it.

The V8-powered 580 model adds more oomph to the lineup. The twin-turbocharged 4.0-liter engine is more than 100 horses up on the six cylinder. Aided by EQ Boost and paired to the same smooth-shifting nine-speed automatic and all-wheel-drive system as its lesser sibling, the larger V8 pumps out 483 horsepower and 516 pound-feet of torque.

Technically, the GLS is a tenth of a second slower than the X7 to 60, but it doesn't feel it.

In Sport and Sport+ modes, the GLS 580 moves with more gusto. Sharper throttle response and refined engine mapping, with the aid of EQ Boost higher in the rev range (rather than just at lower RPMs), improves torque. And there’s lots of it. The electric motor adds as much as 184 lb-ft to what's available from the V8 engine. Weightier steering also adds much-needed feel to the GLS’s tiller, and stiffer springs sharpen up the three-row Benz’s lateral responses in the corners.

But while the optional V8 makes the GLS noticeably quicker (it takes just 5.2 seconds to reach 60 mph), and much sportier in certain modes, the engine’s additional power should appeal only to the handful of buyers who live their life a quarter mile at a time. The six-cylinder with EQ Boost provides ample passing power on the highway and more than enough grunt for zipping around town. Since Mercedes asks a significant premium for the V8 ($22,600, in fact), there's little reason to consider the larger engine. If you want a truly “hot” GLS, wait for the AMG model.

What you will want – nay, need to splurge on – is E-Active Body Control, available on both the 450 and 580. Powered in part by a 48-volt electrical system, E-Active Body Control relies on electronically adjustable dampers with air springs rather than conventional roll bars. That allows all four wheels to move independently.

E-Active Body Control (first introduced on the GLE) gives the GLS an advantage not only on road, but off of it, too. Addressing the former, the GLS rides more like rivals from Bentley and Rolls-Royce than its closest competitors. The electronically adjustable air suspension soaks up crude pavement like a three-row sponge, the intuitive “Curve” function (which reads twisty roads and tips the vehicle appropriately) reduces body roll significantly over the non-active standard air suspension, and the electronically assisted steering, though light, is direct. But since the GLS goes all in on comfort, it lacks the same agility of the X7 on road.

Where the GLS surprises most is off the pavement. At over $100,000 as tested, we hit a public off-road trail in a fully loaded 580 model with E-Active Body Control and off-road kit. There, the GLS proves it can tackle tough stuff typically reserved for products from Jeep and Land Rover. All while riding, almost unbelievably, on massive 22-inch rims (note: the 285 Yokohama off-road tires on our tester are not available via Mercedes-Benz).

In terms of tech, the same twin 12.3-inch screens from other Mercedes models carry over (one touchscreen in the center console, one serving as the digital gauge cluster) with Apple CarPlay and Android Auto in tow. But the new tech on the GLS once again wowed us. Things like augmented reality navigation (carried over from the GLE) and “Hey, Mercedes” voice control carry over (the latter for better or worse), but now the driver and passenger manage more of their individual settings remotely. Let me give you an example.

Before setting off, we set a custom gesture control. In this case, your author chooses the scissor motion to activate the driver's seat massage, and our passenger (associate editor and video producer, Clint Simone) selects the same scissor motion to open up the digital owner's manual. With an overhead camera in the cabin monitoring movement of each person's hands and arms (you know, like Skynet), MBUX recognizes individual gestures and responds accordingly. The same hand motion is thus capable of carrying out two separate commands from those within the GLS. Outside of the occasional failure to recognize any motion from either side, MBUX activates each pre-selected control flawlessly without confusing driver or passenger. It’s much easier than digging through the screen to access the same feature.

As with MBUX, Mercedes Intelligent Drive active safety features from the rest of the lineup carry over to the GLS. With the optional equipment, the GLS reacts to things like stop signs and turns with cruise control activated; slowing the vehicle in both instances without driver input. Active steering assist keeps the car perfectly centered between lanes, while adaptive cruise control with stop-and-go technology keeps the driver from needing to constantly toe the brake pedal in traffic jams.

The advanced safety tech isn't too aggressive, either. It works seamlessly with each individual's driving style, rather than against it as with some safety systems. Lane-keep assist is the only outlier; it regularly shoves the vehicle away from the shoulder, even with space still between the vehicle and the yellow line.

Safety features like automatic emergency braking and automatic park assist come standard, as well as equipment like MBUX and a Burmester surround-sound audio system. So, the base $75,200 GLS isn't short on equipment, even if it is a bit pricier than a base $73,900 X7. But additional active safety equipment, tech like gesture controls and a head-up display, and most notably, E-Active Body Control, all cost extra. For the more-powerful 580 model, Mercedes asks much more. That version starts at $97,800, a steep $22,600 premium over the 480, and a noticeable $5,200 spread over a comparable, V8-powered X7 ($92,600).

The Mercedes GLS won't win any awards for its on-road dynamics. It's comfortable and competent (and surprisingly good off-road), but not the on-road performer its nearest competitor, the X7 is. But the GLS bests the Bimmer where it matters most: tech, comfort, and style.

The upgraded MBUX infotainment system is a class above the rest, as is the GLS’s advanced active safety features and luxurious, tech-laden second row. Matched to a sophisticated exterior, an optional V8, and the ability to move up to eight people and 7,700 pounds, the 2020 Mercedes GLS proves it’s one of the best all-around options in an exceedingly crowded class.