The Present Ghost of Porsche Past: The 356C That Haunts My Dreams 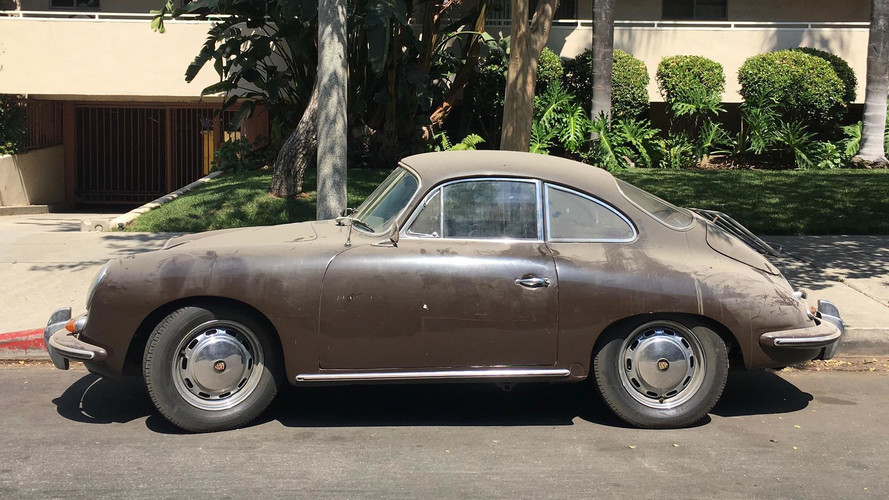 Finally getting to drive the “garage find” Porsche I’d had my eye on for years.

I’m haunted by the Porsche 356. Everywhere I go, they appear. A few days ago I was waiting to cross the street and a blue 1600 rolled by. Days before that, a Super 90 crossed my path in Malibu. Old luftgekühlts are following me.

Or do I have that the other way round? When I was a kid, my dad had two Speedsters. The first blew up in a house fire. The second was lost to bankruptcy. It was the first car I fell in love with, but has always been just out of reach.

And then there’s my neighbor’s 1964 Togo Brown 356C, the car that has tormented me for the past 11 years, sitting dormant three spaces down in my parking garage, dust-covered and wraith-like in a dimly lit corner. I’ve gazed endlessly at it, wondering why it never moves. Not long ago I finally mustered the nerve to ask its owner – I’ll call her “Lady” – why.

Motor1: So, when and from where did you acquire your 356C?

The car’s original Togo Brown paint looks to be in good shape. Yes, there are a few driver’s-side dings and a bit of peeling on the hood, but no signs of rust. I may or may not have closely inspected the car like a Pebble Beach juror, but late at night, so no one saw me. (Don’t judge.) Lady confessed that she doesn’t like brown cars. Too bad. Mommy likes.

M1: Is the engine original?

Lady: No, I had the engine rebuilt in 1989 or 1990, I think. I don’t remember how many miles are on it. I could find paperwork somewhere if you want to look at it, but I don’t remember.

M1: When was the last time you drove it on a regular basis?

Lady: When I first got it, I drove it everyday to work. Then some stuff happened, I had a minor accident and, in 1987, I had to get a new car to get insured. So, I bought a Jetta. Then I got used to driving a new car, but my brother really loved the 356, so I held onto it.

Lady bought a brand-new, 1.8-liter, eight-valve ‘87 Jetta GLI that became her daily driver. When it turned over 100,000 miles, her mechanic convinced her to sell it. She might have a voodoo doll of him in her house now, because she regrets getting rid of it. So, if anyone has an ’87 GLI, I’ll buy it and give it to her for Christmas. Bonus points for a 16-valve car.

M1: This isn’t the first Porsche you’ve owned. What was the first?

Lady: My brother found my first Porsche. It was a 356 Drauz Roadster. My boyfriend at the time talked me into selling it. And plus I really wanted a coupe. So, I sold it to a couple who may have been drunk at the time they bought it. My boyfriend was a jerk and it was a huge mistake, both dating him and selling the Roadster. But my dream Porsche has always been a notchback.

You should’ve seen her smile when she said “notchback.” That particular 356B model was only made in 1961 and 1962 and is ridiculously rare. The first iteration was basically a cabriolet body with the optional hardtop welded on, and it got its name from the hump on its rear end. The 1962 model did get its own design – a specially made coupe, but with a cabriolet back side.

Lady: The mechanic down the street used to get offers on it. It needs a little work, but I don’t really know for sure.

Seems to me Lady needs to stop selling her cars to mechanics and drunk people and pick a nice person. I’ve tasted the vex of desire too long, so here goes nothing...

M1: Do you think I’m a good neighbor?

You see where this is going, right?

M1: Would you consider selling the car to me? Pretty, pretty please.

Lady: [pause] I would consider selling you the car. Or, maybe I’d sell you a share of the car. I have no relative who I’d want to touch my car. In the ‘90s, when these cars started disappearing to really rich people, I was offended by that. So few people have the necessary feeling for the car to appreciate it properly. I used to drive down the street and if I passed another owner we’d flash lights and acknowledge each other. Can you imagine two people driving Civics doing that? Come on!

Me! Me! It beckons me, unnervingly murmuring to me daily. Plus it would stay in our garage and you could sit and stare at it when it invades your dreams at night like it has mine!

M1: For now would you at least let me try to start it and wash it?

My mechanic friend, who usually works on British cars, came to help me get it running. Looking under the engine cover, we were pleasantly surprised: no rust, and the fan belt and other rubber bits weren’t chewed through by some feral occupant. The sump was covered in gunk, so there’s sure to be a bit of a leak, but no visible rust underneath, either.

We drained the oil, which looked more like chocolate sauce, replaced the oil filter, and installed a new six-volt battery. Five quarts of 20W50 racing oil went in (its high zinc content is better for older engines), and it was time. I flipped the fuel petcock valve open and my left foot depressed the clutch. I felt my way through the standard H-pattern gearbox, familiarizing myself with reverse, which is far left and up, past first gear.

The first time I turned it over nothing happened. A gentle knock of the starter solenoid was enough to wake the slumbering German, and with the help of some starting fluid, the Togo brown specter sputtered then thwaaaped to life around me. The shifter slid effortlessly into reverse. I eased onto the throttle and off the clutch, then exactly as W.B. Yeats’ described in The Second Coming, this “rough beast, its hour come round at last, slouches towards Bethlehem.”

The 356C gurgled as it eased across the concrete. The gears were smooth, but the cacophony in the gearbox meant it was screaming for new bearings, and more oil in the shifter. It crept up the ramp, out of the dank garage and into daylight for the first time in years.

This German classic isn’t mine, but this wasn’t just someone else’s car now idling in the sunshine. I was part of its reawakening, its resurrection. Eleven years I’d been waiting for this moment, to help this fantastic car live again. Is the ghost gone? I hope not. Now, if I could only make it mine...