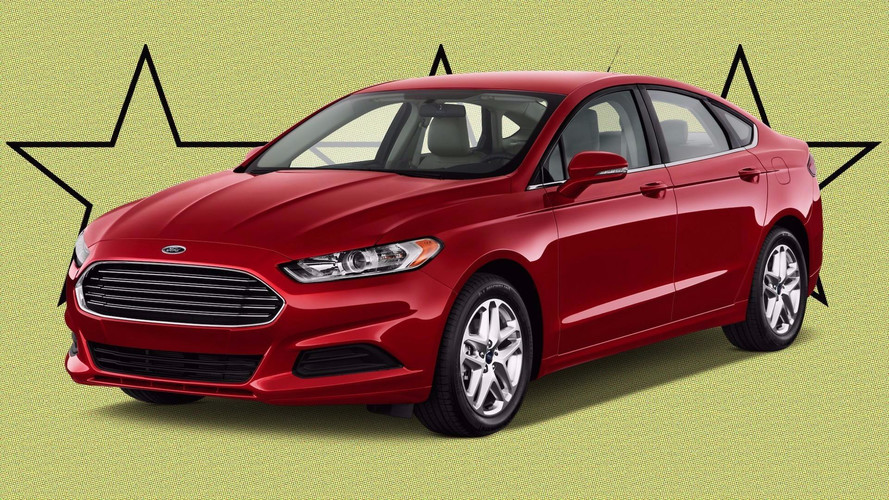 You don’t have to flash a big bankroll to buy a safer car.

Just because you can’t afford a new car or truck – average price over $31,000 – doesn’t mean you have to drive an unsafe vehicle. Heck, even if you can’t afford the average used car – at nearly $20,000 these days – there are far more affordable, but still safe and sound choices out there.

In fact, we found a dozen used cars and crossover SUVs valued at $10,000 or less that crash tests and other criteria indicate will be the safest budget-minded choices. Unfortunately, cash-strapped enthusiasts won’t find much to lust after here, with the list consisting entirely of sedate sedans and crossover SUVs, with Volvo – reflecting the brand’s reputation for safety – holding down three of the twelve slots.

Each model on our list was top-rated for crash protection when new by the Insurance Institute for Highway Safety (IIHS). That means they earned the IIHS’ top “good” rating for both moderate-overlap front and side-impact crash tests, and in evaluations for roof strength and head restraint effectiveness. In addition, each garnered “good” or “acceptable” ratings in the stricter small-overlap frontal crash test that replicates hitting a tree or light pole. Where tested, all also earned four- or five-star overall ratings in crash tests conducted by the National Highway Traffic Safety Administration.

What’s more, each vehicle comes with electronic stability control (it’s been standard on all cars sold in the U.S. since the 2012 model year) that can help prevent drivers from spinning out and/or rolling over in sudden or extreme handling situations. The IIHS estimates that stability control reduces the risk of fatal single-vehicle accidents by 51 percent. You might find a few newer models – typically the higher trim levels within a given line –  equipped with high-tech safety features like blind-spot, lane-departure, and forward-collision warning systems.

We stuck with examples from the 2010 or newer model years to help keep the average number of miles on the odometer under 100,000. Prices are based on Kelley Blue Book valuations as of May 25, 2017 and are rounded off to the nearest $100; they’re quoted for the lowest trim levels in each model line, and assume the vehicle is in good condition, with average mileage, and is being offered for sale by a private party in Chicago, IL.

Of course, the real question mark when buying a used car is its mechanical condition and projected reliability. Always take any used vehicle under consideration to a trusted mechanic before signing a bill of sale to determine what, if any, mechanical maladies it may be currently be suffering, as well as those that may occur down the road.

Estimated price: $6,000-$8,200. Not particularly stylish or sophisticated, the previous-generation midsize 200 sedan (it was also sold as a convertible) remains a safe and sound choice as an affordable used car. Though these prices are for base models packing a lackluster four-cylinder engine and clumsy four-speed automatic transmission, you’d be better off digging a little deeper to obtain a version that comes with the far superior 3.6-liter V6 engine and six-speed automatic.

Estimated price: $6,800-$9.500. This is Dodge’s version of the above 200, with styling that borrowed its cues from the larger Dodge Charger. Though the 200 would regenerate into a second generation for 2015, the Avenger went out of production at the end of 2014. As with the 200, choose one that comes with the V6 and six-speed automatic transmission for more pleasing performance.

Estimated price: $7,600-$10,000. This big and boxy seven-passenger crossover SUV hasn’t changed much over the years, so an older model still looks current, though in a vintage sort of way. You’ll find most coming with the standard 3.5-liter V6, which should suffice for most buyers, with top models coming with a quicker turbocharged V6 and all-wheel-drive. You might find a few fitted with a self-parking feature that steers the car into a parallel parking spot automatically.

Estimated price: $9,600. The midsize Fusion sedan was redesigned for 2013 with handsome good looks to go along with its roomy and comfortable interior, and good overall performance. You’ll find it with the standard 2.5-liter four-cylinder engine at this price, or with either of two turbo-fours and all-wheel-drive in higher trim levels. Some will be equipped with adaptive cruise control, blind-spot and lane-departure warning systems, and Ford’s self-parking technology.

Estimated price: $7,400-$9,600. Redesigned for 2011, the midsize Optima sedan is stylish on the outside and roomy on the inside. It rides and handles well, and accelerates admirably with its standard four-cylinder engine and six-speed automatic transmission; top models come with a quicker turbo-four that delivers V6-like thrust.

Estimated price: $7,500-$8,800. This is the only small crossover to make our under-$10,000 list, which reflects the runaway popularity – and higher prices – of both new and used models in this segment. The Outlander Sport debuted for 2011 with a 2.0-liter four-cylinder engine and CVT automatic transmission (you’ll also find some equipped with a manual gearbox or all-wheel-drive). It isn’t especially quick, nimble, or sexy, but it’s more practical and easier to live with than a same-sized sedan.

Estimated price: $10,000. Not the most exciting car on the lot, the midsize Altima sedan (a curvier coupe was also offered) is at least more agile than a Toyota Camry and costs less on the resale market. It was redesigned for 2013 with a cleaner overall look and comes powered at this price by a fuel-efficient 2.5-liter four-cylinder engine and a CVT automatic transmission; you’ll find some higher-priced examples fitted with a stronger 270-horsepower V6 and lane-departure and blind-spot warning systems.

Estimated price: $9,500. The compact Jetta sedan was freshened for 2015 and came standard with a lackluster 2.0-liter four-cylinder engine; better choices would be either of the car’s available turbocharged four-cylinders at 1.8- or 2.0-liters, respectively (a turbodiesel was also offered but beware that model was recalled as part of VW’s “dieselgate” emission cheating scandal).

Estimated price: $8,800-$9,900. The Passat sedan is known for treating occupants to one of the roomiest interiors among midsize models, with truly expansive rear-seat legroom. The 2013 edition came standard with a just-fair five-cylinder engine, while the 2014 replaced it with a peppier 1.8-liter turbo-four. You’ll find a few top models out there with a smooth and powerful 3.6-liter V6, but at considerably higher prices.

Estimated price: $9,600. The S60 is either a large compact or a smallish midsize sedan, depending on your viewpoint. It’s stylish and affords good driving dynamics with a turbocharged V6 engine and all-wheel-drive. As befits the brand, safety features are plentiful and include an auto-braking system that can detect and react to pedestrians in the car’s path.

Estimated price: $9,500. Even by large crossover SUV standards, the previous-generation XC90 was built like a tank, which is a good thing in terms of auto safety. It rides smoothly and affords good interior comfort. While some larger crossovers barely offer a V6 engine anymore, most 2010 XC90s come with a 3.2-liter V6, and you’ll find a lesser number of top models including a smoother and quicker V8.