Don’t buy a boring crossover. Rebel and buy this hip wagon instead.

Usually when an automaker says that a drive route includes off-roading, you go down a dirt road for a few miles and call it good. Volkswagen has other ideas for proving the mettle of its new Golf Alltrack. Sure, I bomb down a serpentine gravel road, sliding and kicking up dust, but there was a Dodge Grand Caravan on the same road – the Alltrack’s upgrades aren’t necessary at all. Then I turn off into a rocky, bumpy 4x4 trail with signs warning which types of vehicles would and wouldn’t make it through. Hmm.

I switch the Alltrack into off-road mode, disable the parking sensors, and head up a steep, sandy slope that switchbacks around big rocks and trunk branches. The car is constantly leaning from one side to the other as I pick my way through the course, then the nose points toward the tree canopy as I head up a sandy, rutted hill. The Alltrack three-wheels and bogs down, but the car’s computers grab the brakes and, with some driveline lurching and ABS crunching, shuffle power to the tires touching terra firma. I squeeze the throttle and push onward, grateful the suspension lift and front skid plate are keeping me from punching a hole in the turbo engine’s oil pan. By the time I reach the top of the hill, there’s an unmistakable smell of toasty pads from all the brake intervention. But, hey, I made it through a trail that uses pictograms of a Wrangler and a Hummer on its entrance sign. 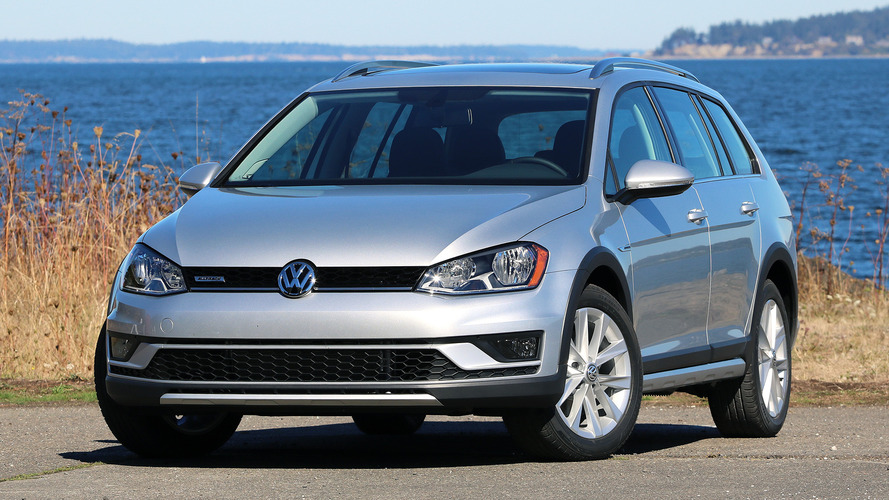 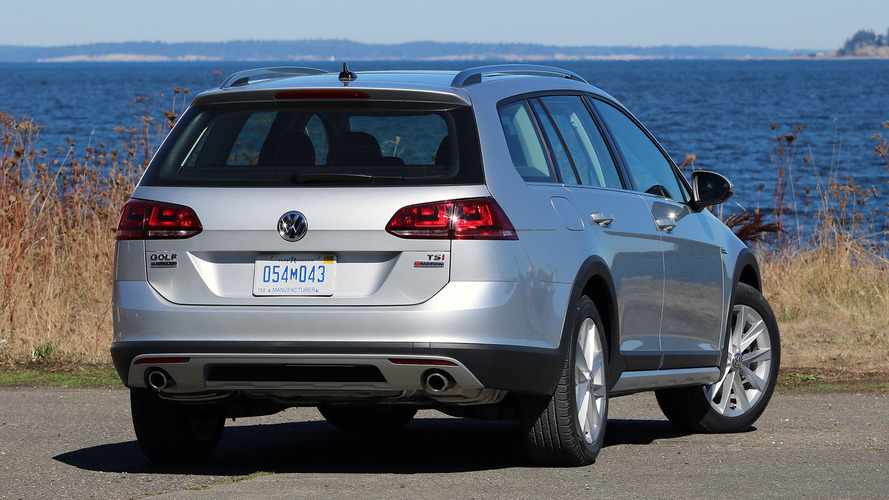 The Alltrack is a simple recipe that converts Volkswagen’s regular Golf SportWagen into a rough-and-tumble soft-roader.

The Alltrack is a simple recipe that converts Volkswagen’s regular Golf SportWagen into a rough-and-tumble soft-roader. Its suspension is raised by 0.6 inches and it rides on specific 17- or 18-inch wheels with higher-sidewall tires, giving 6.9 inches of ground clearance compared to 5.5 in the regular SportWagen. There’s butch, black plastic cladding around the fenders. 4Motion all-wheel drive, which can send up to 50 percent of the engine’s torque to the rear axle, comes standard. And software features include hill-descent control, special off-road ABS tuning, and Volkswagen’s XDS+, the latter of which applies the brakes to slipping wheels to simulate a limited-slip differential.

Read between the lines and the Alltrack is Volkswagen’s bid to steal Subaru’s lunch money. A little roomier than a Crosstrek and a little smaller than the Outback, but priced to match the latter, the Golf Alltrack is the type of go-anywhere, do-anything lifted wagon that Subie fans buy in droves. As in, a combined 21,000 Crosstrek and Outback sales per month so far this year. The Germans want in on the action: VW reportedly expects to bring as many as 75,000 units of the Alltrack from Puebla, Mexico, to the U.S. next year.

The Alltrack drives with the competence and confidence of every other seventh-generation Golf.

VW product planners say their research indicates there’s a huge overlap between Subaru and Volkswagen owner demographics, and that the former usually shops a VW showroom first but leaves disappointed there are few all-wheel-drive options (besides the cramped Tiguan, dated Touareg, and racy Golf R). The Alltrack, the first AWD Volkswagen, uh, wagon sold here in eight years, is aimed right at those buyers. VW is also making 4Motion available on the standard, non-lifted 2017 SportWagen, but it's limited to the base S trim level.

Away from the off-road track, the Alltrack drives with the competence and confidence of every other seventh-generation Golf. It tracks smoothly with light, direct steering and a predictable if soft brake pedal. Adding 4Motion and all that extra cladding bulks things up, though; the Alltrack is 359 pounds portlier than the skinniest SportWagen. You notice on winding back roads that there’s a little less nimbless and deftness to the Alltrack than other Golfs. Against its rivals, the Alltrack is still the most fun-to-drive and satisfying car out there, but it’s meant to be driven like, well, a Subaru Outback, rather than a GTI. 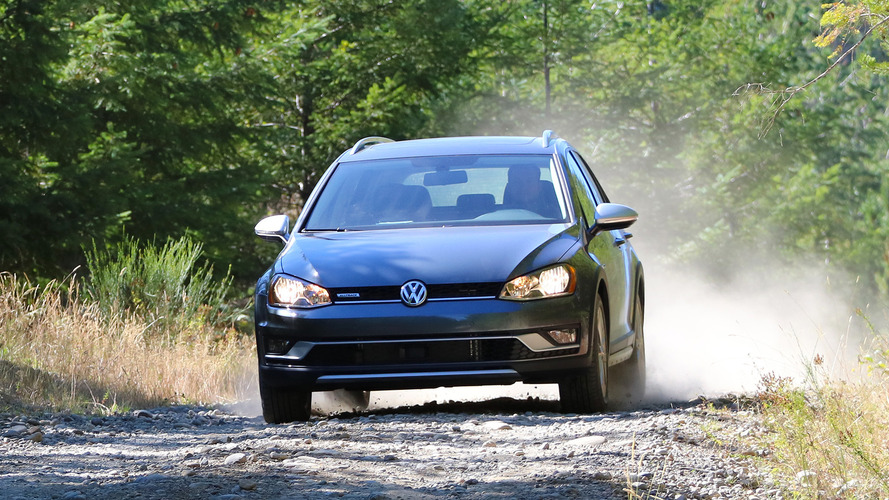 Hey, I made it through a trail that uses pictograms of a Wrangler and a Hummer on its entrance sign.

The taller suspension is also notable for its floatiness; the dampers aren’t quite aggressive enough in quick transitions or big compression when you plunge down a dip, for instance. Piloting a front-wheel-drive SportWagen the next day only confirms that the Alltrack can feel ponderous and soft where the non-lifted version is tauter and more composed. At least it’s comfortable, aided in part by relatively fat tire sidewalls. The all-season rubber measures 205/55 R17 on the S and SE and 225/45 R18s on the SEL, versus 225/45 R17 and 225/40 R18 on the front-drive Sportwagen, respectively.

Saddled with 3,422 pounds of mass, the turbocharged, 1.8-liter inline-four delivers acceleration best described as adequate. It’s a vibration-free mill with ultra-linear power delivery and a broad torque curve that will never leave you wanting for thrust. But its EPA rating of 30 miles per gallon highway is more 2006 than 2016; fortunately the turbo engine can run on regular gas. The six-speed dual-clutch transmission shifts promptly and predictably, holding gears up steep inclines, yet can be reluctant to downshift aggressively unless you poke the kickdown switch. A sport mode and paddle shifters inject some playfulness. 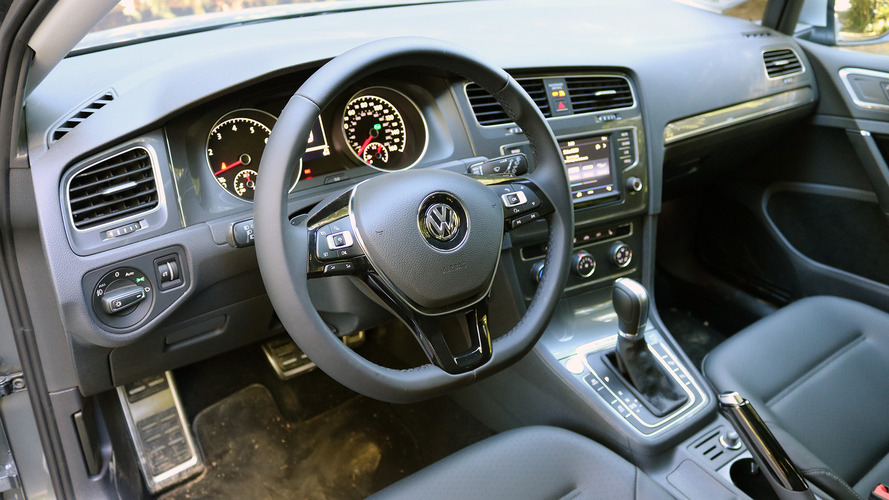 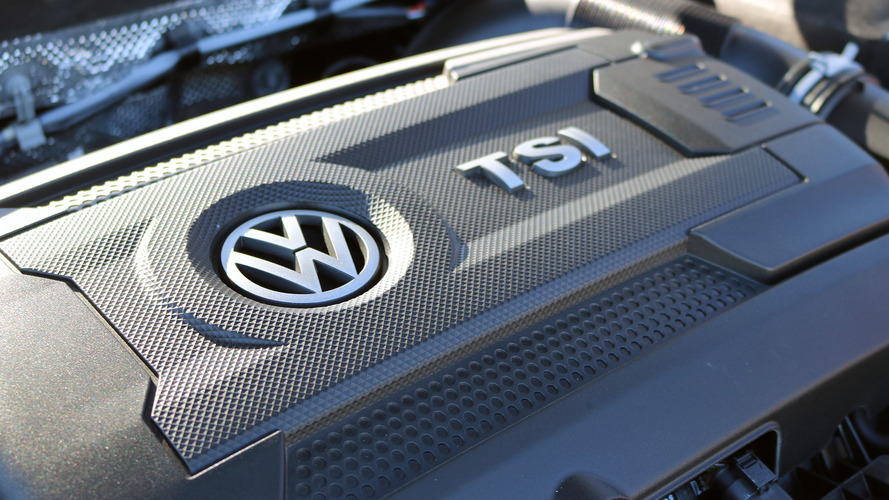 Interior appointments are superb throughout, with good sightlines in all directions, comfortable seats, and switchgear that wouldn’t feel out of place in an Audi.

Interior appointments are superb throughout, with good sightlines in all directions, comfortable seats, and switchgear that wouldn’t feel out of place in an Audi. VW’s latest MIB II touchscreen infotainment system works flawlessly and supports Apple CarPlay and Android Auto. On SEL models, it even has a page that shows off-road data like steering angle and elevation. Standard equipment on all models includes heated mirrors and front seats; roof rails; a backup camera; and leather trim for the steering wheel, shifter, and handbrake. 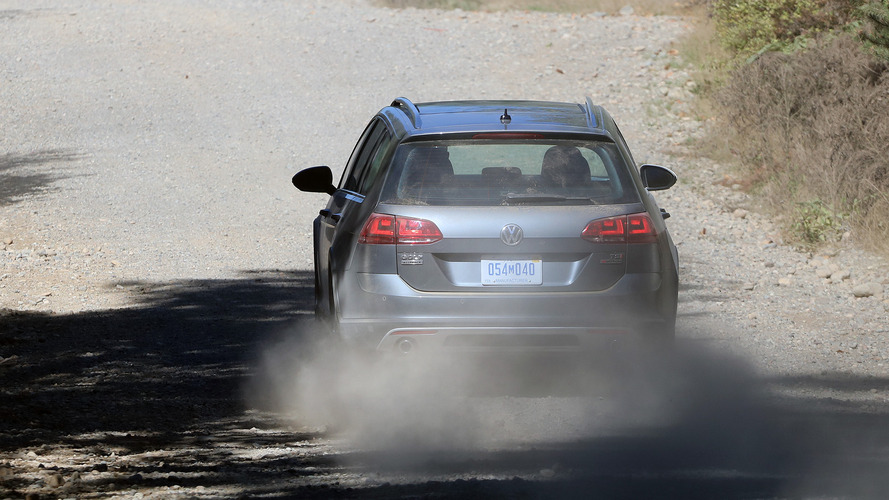 The Alltrack is Volkswagen’s bid to steal Subaru’s lunch money.

The rear seats are fine in terms of head- and legroom, but the tight door cutline might make loading a rear-facing car seat a nuisance. Folding the back seats is child’s play thanks to big release levers in the roomy cargo hold, and the low liftover height makes loading heavy stuff simple. Cargo room is identical to the SportWagen, with up to 66.5 cubic feet. That’s less room than is offered by the Subaru Outback (77.7 cubic feet), as well as popular crossovers like the Honda CR-V (70.9 cubic feet) and the Toyota RAV4 (73.4 cubic feet). The Alltrack even has a pass-through in the rear seats in case, say, you need to transport your skis while also giving three friends a lift back from the slopes. Product planners say that dealers will offer factory winter- and off-road tire packages, as well as an assortment of rugged rubber cargo mats and roof racks.

It’s completely fair to cross-shop the Volkswagen Golf Alltrack against the aforementioned Subarus because they’re so similar in mission and in many objective measures. Subjectively, the Volkswagen is more stylish inside and out, has far more powertrain refinement, and offers more standard features. It’s better to drive and, frankly, I’d rather park one in my driveway. Yet the Alltrack could also go up against the new Mini Clubman All4, and even traditional small crossovers; it’s way more appealing to me than the dull Honda CR-V and soporific Toyota RAV4. The trick will just be convincing wagon-averse Americans to take it for a test drive.