Thundering performance and a cheeky disposition invigorate the Focus.

You can learn everything you need to know about the Ford Focus RS, one of the greatest everyday supercars of our time, simply by coming into a corner a little too quickly. You know the routine: ignore the braking zone, test your luck, and pump-slam your foot on the middle pedal, just to see if you can gain any more speed. In most scenarios, something squirrely happens, the car catches it (or not), and an instant sense of palpitating panic sets in and quickly subsides. You catch your breath and move on, but not without regret.

Not in the Focus RS. The most memorable aspect of Ford’s performance bargain of the decade is how surefooted it makes the driver feel. You can test your limits on the same corner, coming in quicker each time without fear of cocking it up, over and over again. The way the Focus RS rotates flatly and confidently, you’d think the world was a carousel, and you’re just riding on it.

On the back straight of the Monticello Motor Club track, about a two-hour drive away from the city that presumably loves to hate cars, this theory coalesced for me. When you’re on the track and charging toward the back straight wall at 120 miles per hour, you hardly have time to think. Take a page from your spin instructor and focus on your breath, if you can, and let the Focus RS do all the rest. Follow the rhythm of the track music. Stomp zealously on the brake pedal, put your eyes ahead as the quick right-hander dovetails into a series of technical changes of direction, and let a differential transfer power exactly where it needs to be. Downshifting from fourth to third to second, a satisfying thrum from the exhaust pipe limns the sound from under the hood. The way that the Focus RS holds to the pavement all day long, you’d swear that the track was flat. If you manage to mess it up on the track, it’s almost definitely user error – not the hatchback’s fault. 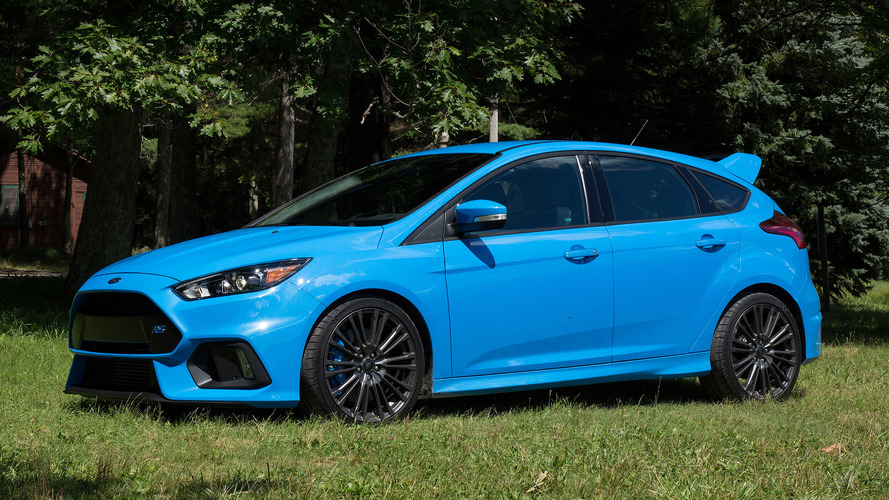 The way the Focus RS rotates flatly and confidently, you’d think the world was a carousel, and you’re just riding on it.

Driving the sub-$40,000 Focus RS is an activity that you’ll refuse to quit, like many of life’s true pleasures. You certainly don’t need to be at a track to have fun in the Focus RS, but if you can get on one, do it. The Focus RS picks up where the Focus and Fiesta ST left off, stretching the abilities of a proven chassis and coaxing out a true driver’s car. Let’s face it: The Focus ST never lit up enthusiasts the way it was supposed to. Its capable chassis was overmatched by a rorty engine and the enemy of refined performance: overzealous, dyspeptic torque steer.

The German-assembled, all-wheel-drive Focus RS redeems the Focus’ performance credentials. It looks relatively similar to any other Focus hatchback, with few RS badges stippled inside and out, and a front clip redesigned to appear fiercer. Where the Focus ST appeals to boy racers, the RS is designed to conquest sales from European brand loyalists looking for something different. You need only look at the spec sheet, which counts Brembo brakes and Michelin Pilot Super Sport tires as standard equipment – even stickier Pilot Sport Cup 2 rubber is optional – to understand that the Focus RS’ modus operandi is delivering thunderous performance. (Live in the Snow Belt? Do yourself a favor and pre-order a set of the factory winter tires.) 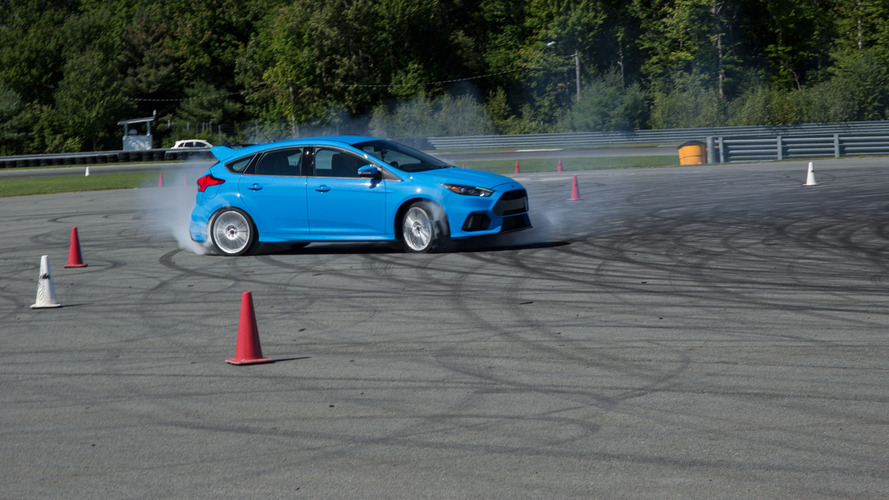 The Focus RS is so talented on the track that you could almost gloss over its party trick: Drift Mode, which turns the hatchback into a blacktop-devouring monster.

There’s only one way to order the Focus RS, with a 2.3-liter turbocharged four-cylinder and a six-speed manual gearbox, but infinite ways to enjoy it. Yes, technically that’s the same EcoBoost engine under the hood of the smallest-displacement Mustang, but the Focus RS’ output of 350 horsepower surpasses what the Mustang can muster. The manual transmission is a nearly perfect conduit for delivering the power; the gear positions are spaced a little too closely for maximum, eyes-off comfort on the track. Clutch takeup is light, gradual, and predictable. An automatic transmission will not be offered, nor will a sedan body style.

The Focus RS is so talented on the track that you could almost gloss over its party trick: Drift Mode, which turns the hatchback into a blacktop-devouring monster. Thanks to some clever torque vectoring from the AWD system, the Focus RS can shift the torque rearward and allow for hilarious, smoky drifting. On an open skid pad, the real-world application of Drift Mode is a hoot. Pin the throttle, and a trick differential does the rest. Point the Focus RS’ blunt nose in the direction you want to travel, turn in gently, and apply counter-steering. The resultant power oversteer is heroic. If you can operate a clutch and have a high tolerance for fun, the Focus RS makes the hard stuff look easy – no handbrake required. Treat it as a lagniappe from Ford to deserving customers. The hard part will be finding a patron willing to have his driveway redecorated with puerile skid marks. 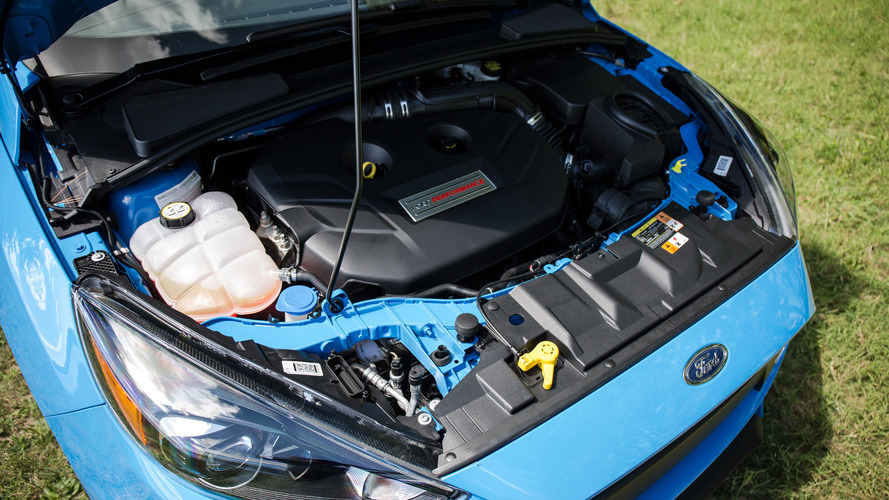 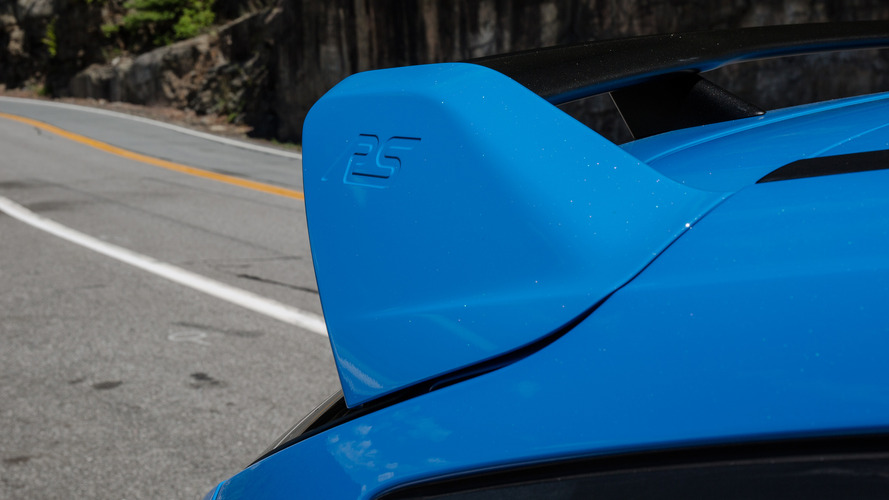 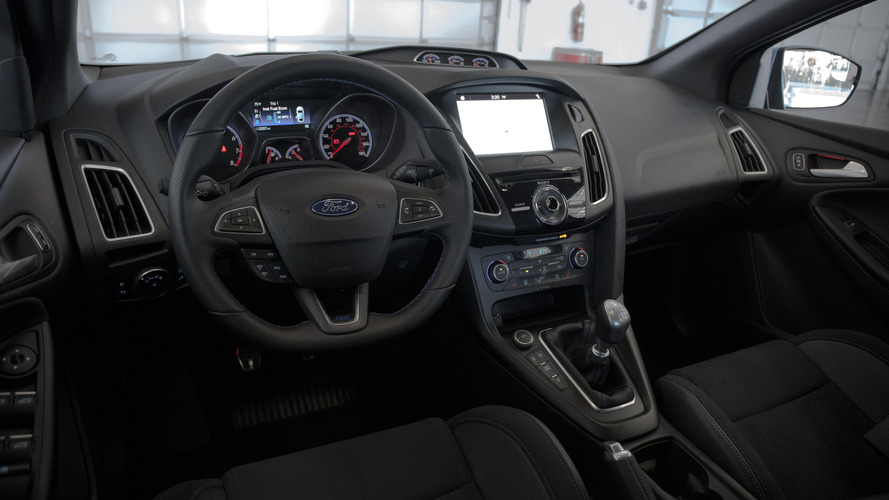 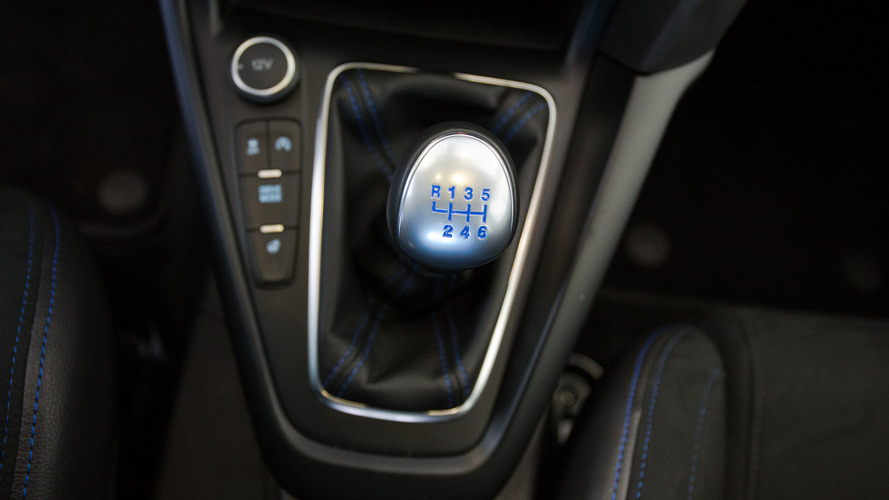 You’ll probably be too busy enjoying driving the Focus RS to notice that there is almost nothing special about its interior.

Unlike some always-on performance cars, off the track, the Focus RS can act the part of a daily driver with an admittedly firm suspension – no matter which drive mode is selected. This is not to imply that the Focus RS treats speed bumps as vituperative interactions with raised concrete, but ride quality is far from comfortable on imperfect surfaces. You’ll probably be too busy enjoying driving the Focus RS to notice that there is almost nothing special about its interior. Save for snug-fitting Recaros, a turbo boost gauge, and buttons to control the drive modes, it’s basically the same setup as in any other Focus. Despite the fact that a new generation of Focus is inevitably on its way, you’ll have to live with an aging design from the moment your RS is new.

Besides the obvious, performance-based reasons to fall in love with the Focus RS, there are plenty of practical grounds. Pop the shapely hatch, fold the seats, and 43.8 cubic feet of space beckons. Its trick AWD system will likely prove useful in inclement conditions. A bright spot is the excellent Sync 3 infotainment screen: Its voice recognition system is second to none, and you can plug in with Apple CarPlay. It has power seats and dual climate control as standard equipment. And in colors other than bright blue, it actually has a sleeper effect, generating less attention than you might hope it would. 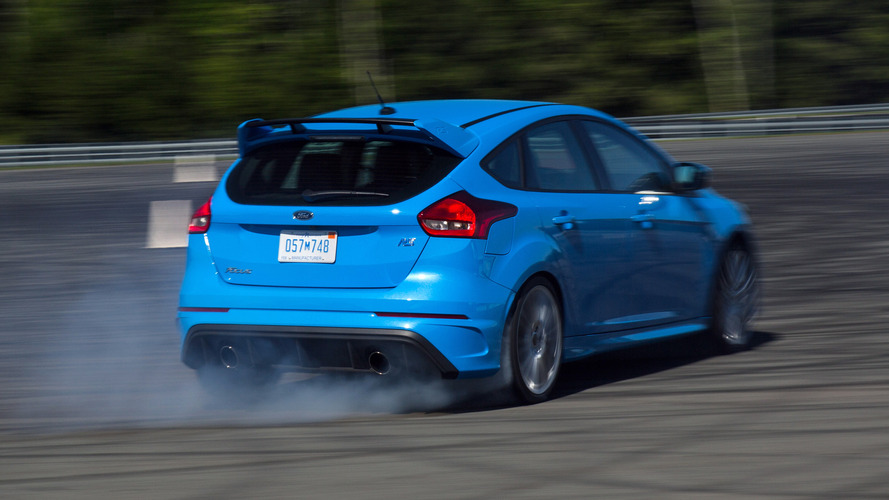 Unabashedly positive kudos are reserved for exceptional vehicles, and this is one of them.

For these reasons and others, it seems disingenuous to compare the Focus RS with the Volkswagen Golf R, a foil by spec sheet alone. While the two hot hatchbacks take on the same mission for their respective brands, execution is far better in the Ford. The Golf R feels softer to drive and more reserved in character, compared to the Focus RS – and hardly a screaming value compared to its own sibling, the dynamically unparalleled GTI. Few other hot hatchbacks even come close to providing a full package like the Focus RS. The Audi S3 and Mercedes-AMG GLA45 are for the sort of person who cares more about lit-up badges than proper steering feel. The Subaru WRX STI feels stripped out and cheaply finished, by comparison.

If this all sounds like unusually high praise, that’s because it is. Unabashedly positive kudos are reserved for exceptional vehicles, and this is one of them. It’s in the same league as the GTI, as an everyday car that needs not inveigle its driver to smile, impressive to drive in all situations. It has the unquantifiable factor that softens the blow of endless traffic jams and wrong turns. You want to keep driving it, no matter how strong it makes your left leg or how often it causes you to be late.

Pre-order one. Test your limits. The Focus RS is forgiving.