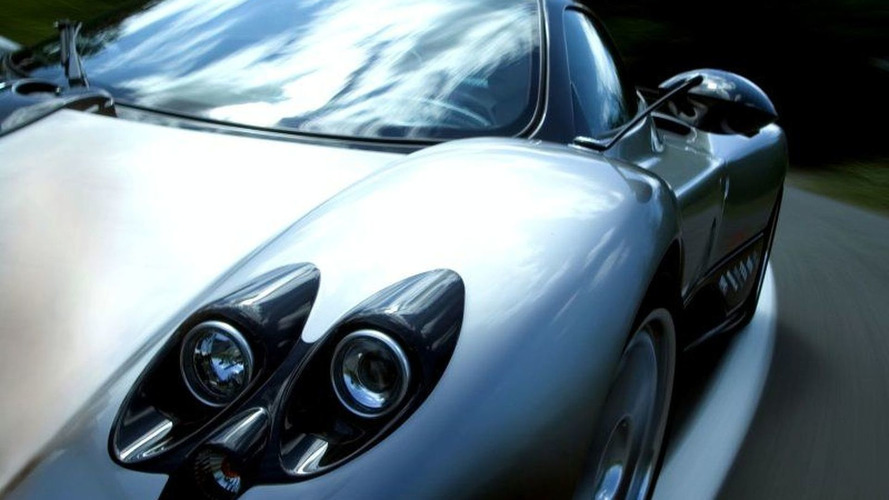 Cars like the Pagani Zonda F are pure theatre, and the giggling schoolboy within became increasingly difficult to stamp down as I was offered the driving seat in €478,000-worth of instant heritage.

Some cars go so far beyond the normal remit of a road goer that real analysis of cornering speed, top end stability and braking performance go out the window. Sometimes it’s enough to accept a few brief stabs on the loud pedal, feel the briefest nudge of opposite lock on the slowest corner and appreciate one of the world’s finest cars in the flesh.

Cars like the Pagani Zonda F are pure theatre, and the giggling schoolboy within became increasingly difficult to stamp down as I was offered the driving seat in €478,000-worth of instant heritage.

Pagani has built his reputation on the Zonda, his first and only car. He’ll be ready to release something new upon the world in two years, but it’s a measure of the Zonda’s flamboyant design, as well as its exclusivity, that the visual impact of the basic design remains wrecking ball strong after seven years.

The cab-forward design apes the 1980s Group C sportscars of decades past, but does it beautifully and exquisitely prepared and polished detail pieces adorn the car at every opportunity: from the carbon-fibre headlight surrounds to the badge set high in front of the windscreen. Then there’s the Gatling-gun quad exhaust, taking pride of place, dominating the rear and serving as the Zonda’s calling card.

As for the interior, well it’s grander than Liberace’s piano. There are vents on naked carbon-fibre stalks, a bejewelled instrument panel and sculpted, embroidered leather and instrument panel with aircraft-style switches.

The flat-bottomed wood wheel was a touch too much for my tastes and the whole interior was decidedly camp, but this is bespoke engineering and Pagani took weeks to meet one customer request for a gearstick like his jet’s main control. They’ve decked cars out in Ostrich leather and, within reason, they’ll do what you want on the inside of the car.

Now to get the differences between the ‘oh-so-standard’ Zonda C12S and the F out of the way - they’re huge, there are 60 new components under the skin and even that, together with the carbon tub, has been modified, with a different weave lightening and strengthening the whole structure.

The nose cone is longer and a cunning inverted scoop under the cowl now provides even more downforce on the front end. And ceramic brake discs feature on the Zonda for the first time here, as Pagani is finally convinced the noise and durability concerns have been answered by Brembo’s latest developments. The changes are far from cosmetic.

The single-plane rear wing is a more effective weapon than the multi-element number on its sibling and this machine develops 602bhp as standard – 650bhp in Clubsport spec. Only 25 will ever be built, there are only slightly more than 60 Zondas in total around the world anyway, but if you want a hypercar you’ll never tire of, this is the place to come.

Only the Porsche Carrera GT and Ferrari Enzo breathe this rarified air, and the Zonda F could stake its claim at the top of this particular triumvirate on a number of grounds. It doesn’t have that ceramic clutch or knife edge handling of the Carrera GT, nor the flappy paddle gearbox and need for a service every 35 miles that goes with the Enzo.

Underneath the window dressing the Zonda F relies on basic engineering and owners have been known to rack up 20,000km a year. Each part is analysed, by the way, everything that goes on to this machine is perfect in its construction.

The 7.3-litre AMG-tuned Mercedes V12 is the most complex part of the car by a long way, but it’s still relatively unstressed, produces 560lb ft of torque and powers the carbon-tubbed, 1230kg supercar to 216mph.

It will also scorch to 60mph in 3.6s and break through 125mph before the 10 count, which felt like’s angels opening Heaven’s gates opening and ushering me through. The boat-like engine doesn’t offer the Maranello-style high-revving whine, it’s a deeper, more aggressive note that somehow reveals more of the mechanical violence going on just inches away.

That exhaust, hydroformed from Inconel – widely used in Formula One and military applications – has a glorious song. Kept on a gentle throttle in sixth gear, which is all you’ll ever need to do with this torque happy basking shark of car through town, the V12 rumbles as it lazily turns over. But hit the gas and the bypass valves open, all 12 valves roar and the world, as it used to be, comes to an end.

The Zonda F as fast in a straight line as any car on the road, give or take a fraction, so inevitably it takes off like a scalded whippet and simply sucks in the landscape like a bad Star Trek special effect when given its head.

All I had to do is keep a hold of the ornate wheel, keep banging through the rock solid Cima six-speed and get back on the power. Traction control mops up the excess at the back, while leaving just enough leeway for a small slide and that whiff of opposite lock.

Pagani’s customers include mega-rich businessmen, royalty and sporting stars, they’re not necessarily the world’s best driver and in this car they don’t need to be.

It’s not just the Bosch traction control unit, it’s the sheer accessibility on offer from the car as a whole. The design means the corners can be placed with absolute precision, although the wider rear track that accommodates the meticulously toothed 20” magnesium alloy wheels and provides prodigious levels of grip must be accounted for on mountain roads.

The ride is totally flat, supple and forgiving thanks to a meticulously developed Ohlins and Bilstein set-up that is designed to lap up the kind of broken, rural Italian tarmac we had to contend with. It was developed on such roads, after all.

This car is so composed it accepted heavy braking and a yank on the wheel with the enthusiastic Mr Pagani at the wheel, the ABS juddered, the wall loomed large, but the car still turned in. It wasn’t something I’d have tried, as the foot-shaped hole in the middle of the passnger footwell will attest to, but it was a devastatingly effective demonstration of the Zonda F’s skills.

This is no racer for the road, it’s a well thought-out, comfortable machine that just happens to corner better than anything without sponsor logos and primetime national coverage.

In another life, the chassis could easily have formed the basis of a GT racer. Legend has it that when composites expert Horatio Pagani presented his first Zonda chassis to Mercedes, they were rather surprised to find it was stuffer the Sauber’s world sportscar entry. This one is stiffer still, but Pagani doesn’t talk about torsional rigidity improvements, he talks about art and the joys of engineering.

“When I started I didn’t want to build better cars than Ferrari or Lamborghini, just like Michaelangelo didn’t set out to be better than Leonardo,” said the man who has his first battered model car in a display case alongside greats from automotive history. “I just wanted to express myself.”

There was another reason for the F, too. Argentine Pagani’s good friend Juan Manuel Fangio was heavily involved in the first project and the Zonda was destined to bear his name. After the great man passed away, Pagani felt he could not take his name in vain. But he wished to pay homage to the man rated by many as the best racing driver of all time. This car, his greatest car to date, is far more than a fitting tribute.

It might just be the best car in the world.