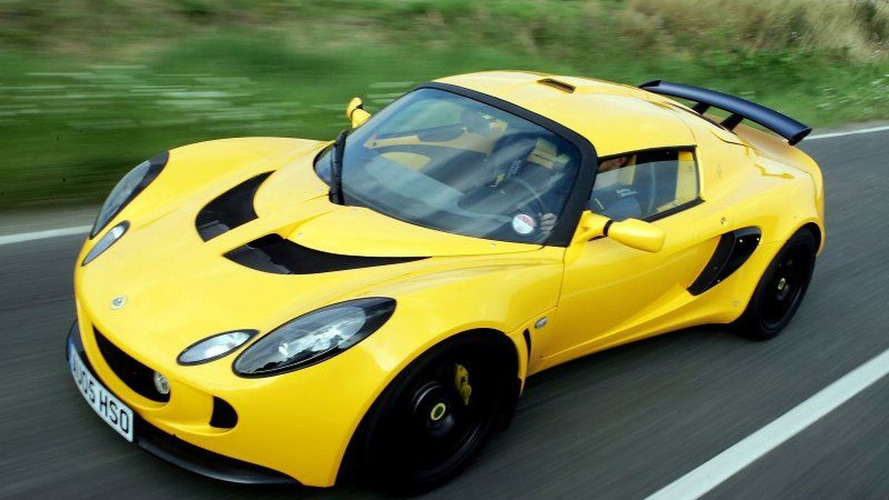 You don't need a 500bhp engine if the car weighs less than an anorexic gnat and the handling advantages of a lightweight car are immense. It's a warrior to be taken out of the garage only for X Rated thrills...

When a car sells out before it even hits the market, you know you’re dealing with something special. All 50 Lotus Exige 240Rs are already gone and Lotus claims they’ll never sell anymore. So if you were a bit slow on the uptake, forget about it.

Still, the claim from the men in Norfolk that there would be no other supercharged Exiges didn’t ring true even then, all that technology for 50 cars didn’t compute. And now before this even goes to press the Exige S is with us, with 218bhp, but it’s no 240R.

The original Exige carved itself a place in motoring folklore. The original car could match machines 10 times its price round a race track, so is this £43, 995 version that much better? Well, yes.

Strapping a Rootes-type Eaton M62 supercharger to the Toyota-sourced 1800cc engine, together with new pistons, cams, rods and other trick bits from the Toyota parts bin, has produced a 243bhp powerplant. That’s not huge, less than a Porsche Boxster, but then this car weighs just 930kg and that’s half as much as Porsche’s more sensible daily driver.

Lotus has stayed true to the guiding principle of founder Colin Chapman: “Just add lightness.” He took it to extremes, though, when he entered Formula One in 1958. If a component on Chapman’s cars wasn’t on the point of failure at the end of each race, he ordered a lighter one for the next Grand Prix.

Driving a Lotus racing car wasn’t a job for the faint of heart, but Jim Clark, Graham Hill, Emerson Fittipaldi and Mario Andretti all stormed to Drivers Championships in his machines. Chapman was credited with some of the most exciting breakthroughs in racing technology, including ground-effect aerodynamics, but weight saving was always a central theme.

You don’t need a 500bhp engine if the car weighs less than an anorexic gnat and the handling advantages of a lightweight car are immense.

This car comes with a leather-clad carbon-fibre seat and the extruded chassis and gearchange lights hint at track purpose.

Some roadgoing comforts have been included, though. The new 240R comes with air-conditioning, electric windows, a four-speaker Blaupunkt stereo and even a jack-point for an MP3 player

It’s heavier than the standard 875kg Exige, but nearly 30% more power swallows up the weight of that added kit and more. If you’re only intending to use the car on track you might be tempted to go for the Exige S sport edition, but this is still the quickest one.

This car reaches 60mph in 3.9sec and 100mph in a shade under 10sec. And while the standard Exige suffers a dip in power between 5000 and 7000 revs, this one is tuned to encourage the driver to use every single one of the 8200 revs on offer.

As the Toyota powerplant reaches its crescendo the noise through the cockpit from that screaming four-cylinder and laboured Supercharger is like a shrieking mechanical cat. It’s a high-strung powerplant, and that suits the character of the new Exige perfectly.

This car borrows the Formula One philosophy of high power at high revs and has just 174lb ft of torque at 7000rpm.

This accounts for the alarming way the 240R acquires speed. With this lightweight, low torque motor, there is no sudden kick in the back or wall of power building from behind as the weight shifts and the engine tries to tear through the front of the car. It puts the power down so cleanly, without a hint of wheelspin, that it doesn’t even feel hurried. This, the most powerful Exige yet, actually feels like it could handle a good few more horses.

There is no weight to shift. So under hard acceleration the engine, that is clearly visible through a sheet of clear Perspex in the rear of the car, wiping out all rear visibility, simply goes from loud to insane and the needle whips round in the rev counter binnacle. It doesn’t feel dramatic at all on smooth tarmac, and even on rougher stuff it is more composed than a pared down road racer of this ilk has any right to be. .

The small racing-style steering wheel thrashes like a shark in a net and takes a firm hand to keep on the straight and narrow. It feels connected directly to those front wheels that describe the road on a cellular level with constant and sometimes violent tugs at your hands.

It crashes, fidgets and bounces off every rut, ridge and weed in the road. This is a car that needs steering with the shoulders. It doesn’t need big inputs, the tiniest move is enough to change direction slalom style, but the constant kickback takes its toll on a long frenetic drive.

It’s a hard physical workout driving anywhere near its stratospheric potential, this car stretched my muscles, tested my nerve and felt just as involving as any single-seater I’ve driven.

The 240R has full-bore track suspension with two-way adjustable remote dampers with a mind-boggling 22 compression and 60 rebound settings. A seven-setting, adjustable front anti-roll bar plus a fixed anti-roll bar complete the package.

Lotus recommends a range of settings/stroke parameters to work within. Adjustment to both dampers and roll bar is very simple and you can switch between road and track in a matter of minutes.

Aerodynamics, too have been honed for the track. The 240R generates 21.9Kg at the rear and 19.3Kg at the front at 100mph – generated by the front splitter, air scoop on the roof, the rear wing and ground-effect diffuser. It’s enthralling to feel how Chapman’s work in F1 has passed down through the generations and evolved into this.

Because of the aerodynamics there is not a big window for error in the corners, this isn’t a machine you’ll be able to rescue if it all gets out of hand. Go in too fast, break the aero grip and the car will spear off the road in a heartbeat. The satisfaction with the Exige is working within its prodigious limits and scything smoothly through bends, try and push the car into unnatural mid-corner acrobatics and it will bite you.

The front tyres, super sticky Yokohama numbers, are actually wider on the front than the back to combat oversteer. You can provoke it into going broadside by lifting off suddenly midcorner, before pouring on the power, but this is a car for those that have evolved from such cheap thrills on to a more subtle yet just as manic high – pure unadulterated speed.

It will hold lines that would have most modern sportscars disappearing into the nearest hedge in a cloud of tyre smoke. It just shouldn’t stick to the track at those speeds, but it does.

This car is so capable it will make you look far better than you are, but to take the car to its limits you’ll need to hit the circuit. I didn’t get close on the roads round Norfolk and we were still going way faster than was necessarily a good idea on unfamiliar turf.

Here is where the lightweight nature of this car makes sense, when all the creature comforts of much heavier supercars seem like ugly compromises. It’s a stripped out track and weekend toy, nothing more, and it doesn’t need a boot, back seats or any other creature comfort to justify its existence. It’s a warrior to be taken out of the garage only for X Rated thrills..

The much cheaper Elise may well return much more satisfaction per € to such owners, but for experienced Lotus hands that want the ultimate in grip and performance, this has to be the one.

And that’s a shame as, like I said at the start, it’s all sold out…