I’ve never felt this kind of bond with a Mustang. Truth be told, I’m not a muscle car guy. I don’t care about big straight-line speed – for me, a sporting car’s worth is measured in smiles through corners, not quarter miles on drag strips. So it’s a good thing that the 2016 Ford Shelby GT350 Mustang doesn’t follow the muscle car formula. It handles. It grips. It’s a racetrack superstar. It makes me want to drive it harder and harder for hundreds of miles. Of course, this car could probably have any engine under the hood and its handling chops alone would make it a fantastic beast to tame. But there’s one hell of a heart under that long, bulging nose. And it’s the pièce de résistance of what is, in my mind, Ford’s best Mustang yet.

I’m talking, of course, about the naturally aspirated 5.2-liter V8. It’s a brand-new motor, and it bucks the trend of everything in the world getting downsized and turbocharged. Instead, Ford uses a flat-plane crankshaft that not only reduces weight within the engine, but allows this free-breathing mill to spin all the way up to 8,250 rpm in every gear. The numbers are only half of the story – 526 horsepower and 429 pound-feet of torque already sound good on paper, but they sound even better at 6,000 rpm in third gear, running fast through a long set of switchbacks on my favorite roads about 50 miles west of Detroit. 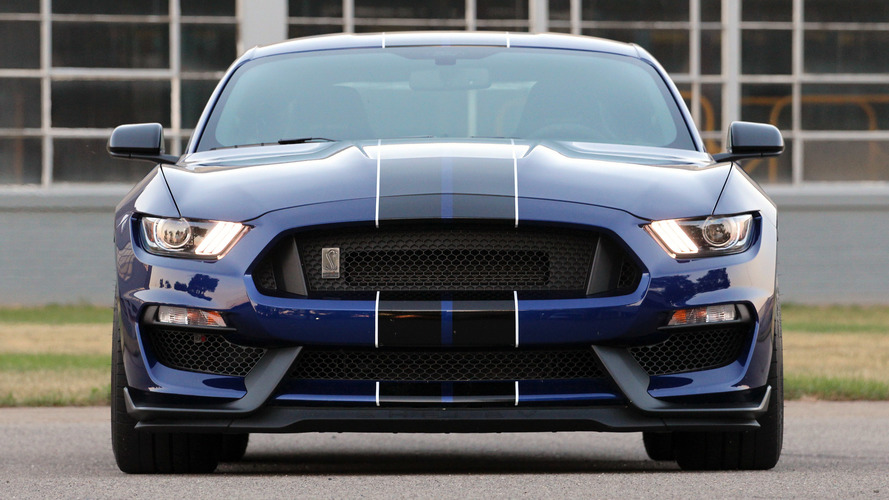 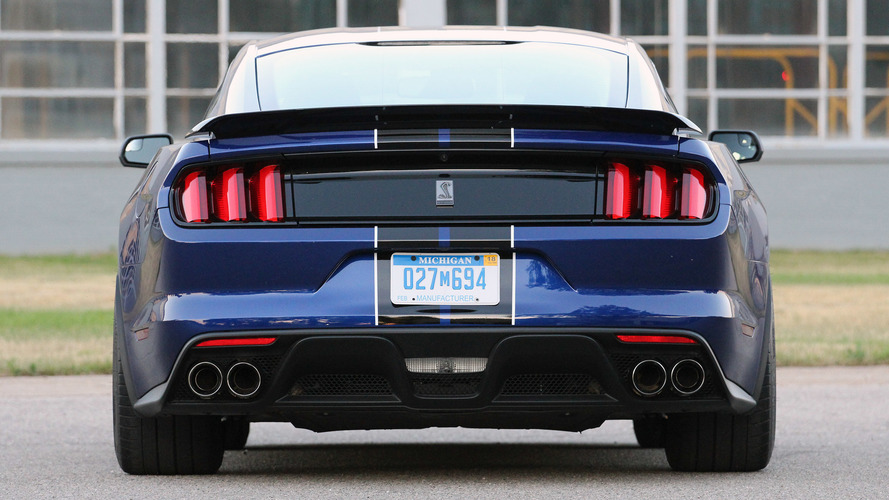 You could certainly leave the drive setting in Normal for a quieter experience, but that just seems impotent and silly. Let freedom ring.

I’ll admit there’s a noticeable lack of low-end power, but it doesn’t really matter. Torque seems to pour out the deeper you dig into the throttle – a rising wave of force that stays strong up to the redline. This engine loves to rev high and sing, and with the drive mode set to Sport (this fully opens the exhaust), you’re rewarded with a drumroll of sound that’s more supercar than muscle coupe. You could certainly leave the drive setting in Normal for a quieter experience, but that just seems impotent and silly. Let freedom ring.

The way this car moves down the road is absolutely magical; a lot of things are working together here to offer maximum driver enjoyment. The first-ever-for-a-Ford MagneRide dampers are fantastic, with the ability to turn the GT350 into a hunkered-down grip machine on good roads, but keep it as comfortable and compliant as a Fusion on the highway drive back to your house. Only the smallest, perfectly acceptable bits of body roll and nose dive are apparent, and you’re left with a coupe that’s always properly set up for every corner, and fully ready to make hundreds of miniscule adjustments to ensure you’re just as prepared for the next. I imagine it grips like cat claws on carpet with warm tires on a track. 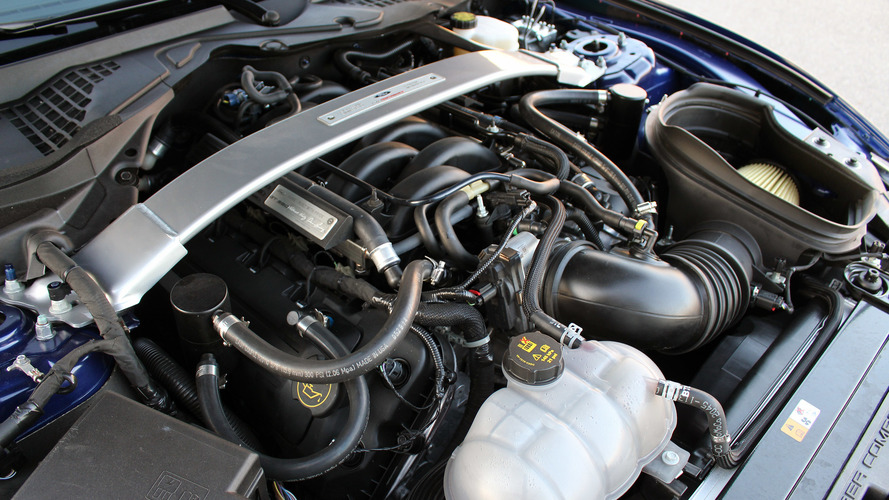 526 hp and 429 lb-ft already sound good on paper, but they sound even better at 6,000 rpm in third gear, running fast through a long set of switchbacks.

Equally driver-centric is the Tremec six-speed manual transmission, a DIY shift setup so good it deserves its own standalone paragraph. The short-throw, precise action of the shifter is brilliant, and the progressive, yet firm, clutch pedal is easy to get on and get off with a quickness while still delivering smooth transitions into and out of each gear. I’ve long known Tremec for its manual transmissions in a number of high-power American machines, but this GT350 setup is the company’s best work yet. It’s almost Germanic in precision, but works perfectly with this Yankee power machine.

The one semi-sore spot with the whole driving experience is the steering. No matter the drive setting, there seems to be just a bit more electronic assist than I’d like, and while feedback is strong, the tiller has a tendency to feel a touch too twitchy at times. But let me be clear, I’m being really nitpicky – this is still some of the best steering feel I’ve experienced in a Mustang yet. It’s just not quite there. 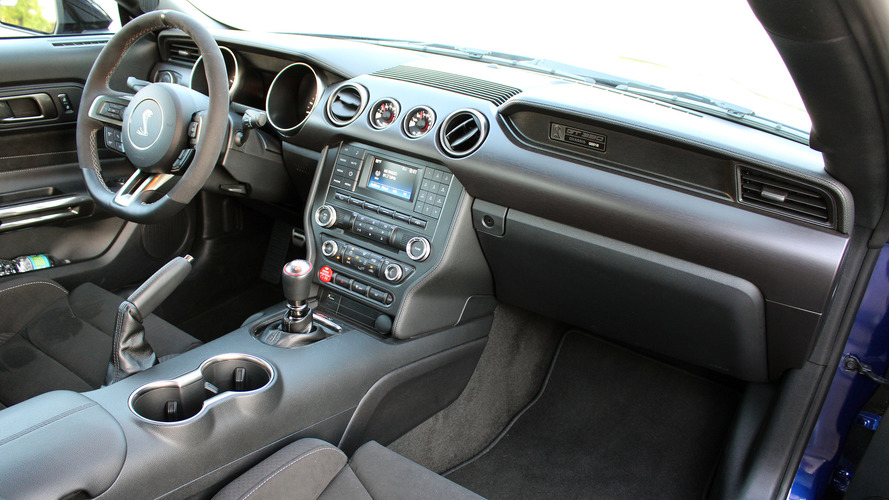 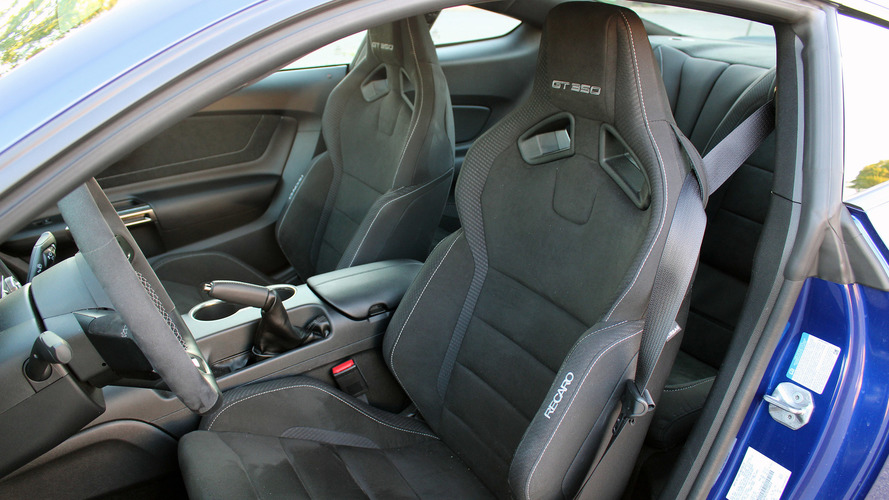 I’ve long known Tremec for its manual transmissions in a number of high-power American machines, but this GT350 setup is the company’s best work yet.

I feel the same way about a lot of the interior – not quite there. A few bad plastics are found here and there, and some of the switchgear feels a little too Ford Fiesta for use in a sports car costing more than twice the price of the bargain hatch. Still, the big gripe with this car is that if you want the Track Package with its MagneRide dampers, heavy-duty springs, and more – and believe me, you do – you can’t get the Technology Package with the larger infotainment touchscreen and Sync 3 connectivity. Thankfully, Ford is fixing that for the 2017 model year. A glance at the Mustang configurator reveals 2017 models come standard with MagneRide and all the other Track Pack goodies. Adding infotainment will set you back $3,000. And don’t you dare spec the Convenience Package that swaps out the cloth Recaro seats for some leather-trimmed ‘sport’ buckets. Those Recaros are so, so good.

The current Mustang is already a really attractive car, and while you can decide for yourself how you feel about the Shelby treatment, I’m fully in favor of the changes. The broader stance and bolder front end look cohesive and smart, but still clearly announce the GT350 apart as the most hardcore of the Mustang lineup. The dark, 19-inch wheels look fantastic, and all the little aero details – vents, lip spoiler, etc. – are functional. 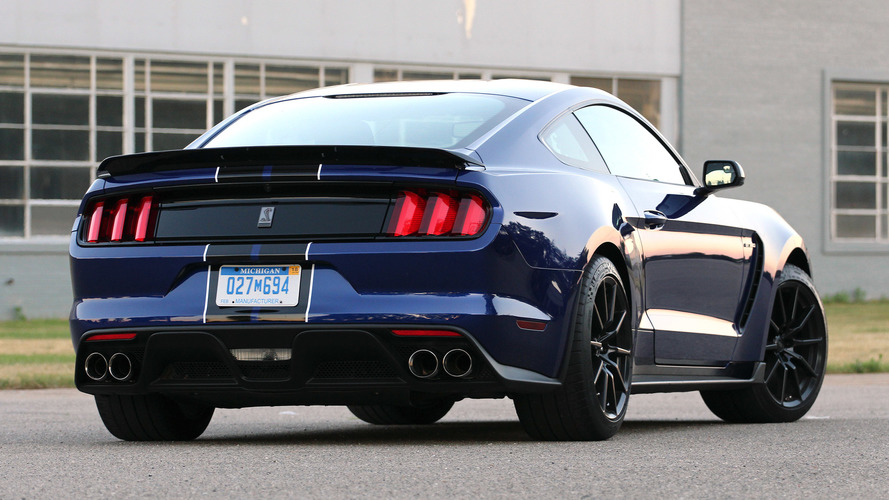 The Shelby has the handling capability not only to outpace every other muscle car currently available, but stand up and whomp more expensive sports cars.

For as good as this car is to drive, fifty grand seems like a total bargain. The Shelby has the handling capability not only to outpace every other muscle car currently available, but stand up and whomp more expensive sports cars. Cadillac ATS-V or GT350? I’ll have the Mustang. BMW M4? No thanks, I’ll take the Ford. The only real competitor here is the super-hardcore Chevy Camaro Z/28, and while that’s a comparison test I’d love to write, the smart money is on the Ford for being more livable in daily life.

“I’ll take the Ford” is a line I’ve found myself saying more and more lately, mostly because it’s clear the performance car team knows what the hell it’s doing. This GT350 isn’t just a great Mustang, it’s a great sports car, and one deserving of all the praise you’ve no doubt already read all over the internet. The 5.2-liter V8 engine is a free-breathing bit of muscle shoved under the hood of a finely tuned track weapon. I absolutely love it, and no matter your preconceived feelings about Mustangs, I promise, you’ll love it, too.