For drivers and passengers alike, Bentley’s flagship is better than ever.

I’m sure I looked absolutely disgusting when I stepped off the plane in Innsbruck, Austria. A long flight from Detroit to Frankfurt, a layover in a balmy conference room, and a choppy private jet ride over to my destination resulted in frazzled hair, my face covered in a fine layer of airplane sweat, and a very specific, no-time-for-a-shower odor. Yet as I stumbled tiredly across the tarmac, a handsome fellow in a well-tailored suit smiled at me, loaded my luggage into the back of a 2017 Bentley Mulsanne, shut the door for me, and escorted me off airport grounds and out onto the winding roads of Bavaria.

If that sounds like just another day in the life of a Bentley Mulsanne owner, you’re mostly right. Sure, these well-heeled folks no doubt jet-set all over the place, between various homes in various countries, but there’s an interesting fact to remember hidden in all this opulence: only one or two percent of all Mulsanne owners are exclusively chauffeured. The majority of Mulsanne owners actually drive their cars. Of course, Bentley hasn’t forgotten about its one-to-two-percenters in this 2017 model year Mulsanne update, adding a new, extended-wheelbase model that’s focused on – and delivers – otherworldly levels of luxury.

Rather than roll them out over the next several years, all three versions of the updated Mulsanne launch at the exact same time. There’s the standard version (Bentley would prefer you call it “Signature,” even though that’s not its official name), the extended wheelbase, and the luxo-rocket Speed. All three exist to serve different customers, though they all benefit from the same host of updates. 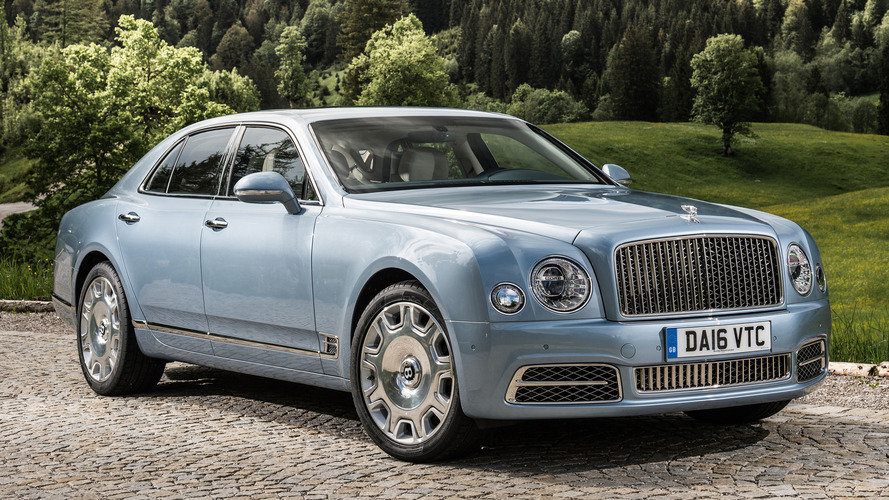 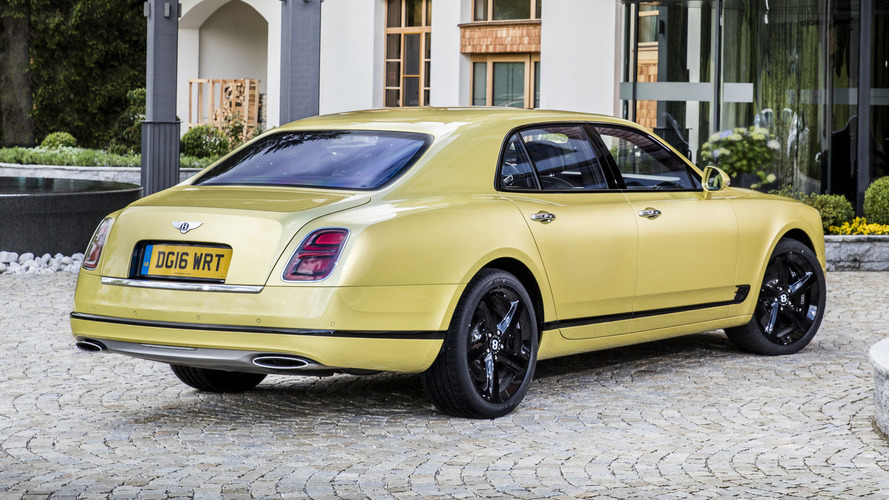 Only one or two percent of all Mulsanne owners are exclusively chauffeured.

In much the same way Bentley has periodically waved its freshening wand over the Continental, the Mulsanne gets modest nips and tucks. Park the 2017 model next to a 2016 and you’ll see the differences. Front and center, the stainless steel vertical-vane grille is 3.1 inches wider than on the outgoing car, the mesh matrix grille nestled behind it. The quad headlamps are now full-LED units, and the outer, smaller running lights now sit on the same horizontal plane as the bigger housings (in other words, the car no longer has a double case of lazy eyes). New wheel designs grace all four corners, the stylized B-shaped vents aft of the front wheels have different finishes depending on model, and at the rear, LED taillamps have a new “B” light signature (though it’s reversed on the passenger side) that really stands out in the dark. Speed models get the same tweaks, but the brightwork wears a dark finish. Otherwise, it’s business as usual – the Mulsanne is grandiose, and pure Bentley. It’ll look good next to the six other cars in your driveway, or, you know, your jet.

Underskin changes work to make the Mulsanne somehow even more supple as it wafts down the road. Active engine mounts and new suspension bushings reduce vibration, and Bentley has actually added an advanced, noise-cancelling foam inside the Mulsanne’s tires, which seems weird, but is said to reduce rolling noise. Honestly, without driving the past and present generations of Mulsanne back to back, the difference seems negligible. The previous Mulsanne was hella quiet; the new one is, too.

There’s nothing quite like the experience of chucking a 5,919-pound brick down the road, hitting 60 miles per hour in 4.8 seconds and running a full quarter-mile in only 13.2.

Unchanged is the heart of the Mulsanne: Bentley’s iconic 6.75-liter V8, with a pair of turbochargers bolted on for good measure. In the standard – err, Signature – and long-wheelbase Mulsannes, you’ve got 505 horsepower and 752 pound-feet of torque at your disposal, which is plentiful but not excessive, especially considering the car weighs nearly three tons. The Mulsanne Speed uses the same engine, but output is increased to 530 hp and 811 lb-ft, which is both wholly unnecessary and amazing. There’s nothing quite like the experience of chucking a 5,919-pound brick down the road, hitting 60 miles per hour in 4.8 seconds and running a full quarter-mile in only 13.2. Interestingly, Bentley says 60 percent of Mulsanne customers buy the Speed, not because it’s quicker, but because it’s more expensive and powerful, and therefore better, you philistine.

This car might be for drivers, but it’s not what I’d call a driver’s car – that’s a tall order for any fullsize car, let alone one that’s 18 feet long and nearly 6,000 pounds. Combine that with heavy steering that lacks feedback and a suspension that, in its default setting, disconnects you from the outside world, and you’ve got a car that’s challenging to drive through the switchbacks of the Bavarian Alps. Bentley uses its Continuous Damping Control air suspension, with normal, Sport, Comfort, and Custom driving modes that alter damping behavior, but even in the stiffest setting, this is still a car that prefers if sir does not hustle it through the bends. I’ll say, in the Speed, Sport mode does offer a bit more chassis stiffness than I initially expected, and it makes the barge feel slightly lighter on its feet, but the lifeless steering and overall sense of isolation are there no matter what you do. If you really want a Bentley that’s meant to be driven, get the Continental GT – V8 S for me, please.

Sixty percent of Mulsanne customers buy the Speed because it's more expensive and powerful, and therefore better, you philistine.

Good thing the Mulsanne is so damn silky smooth when it’s just being lazily driven about. Again, there’s a ton of power available here, and the air suspension adjusts ride height based on speed, so the car is hunkered down and more stable at higher velocities. Running at 150 mph on an unrestricted stretch of German autobahn is a cake walk, and the big, iron, 15.7-inch front and 14.6-inch rear brakes feel meaty under the stop pedal, but work effortlessly when the weird little Peugeot that’s only going 85 mph shows up in front of you. Should you require more-than-adequate stopping power, Bentley offers carbon ceramic brakes for a mere $17,335.

Speaking of more-than-adequate, there’s a real sense of occasion to everything about the Mulsanne, and that’s especially true inside the car. The finest leather hides and wood veneers fit together in elegant style, with a swath of big buttons and knobs, polished trim, and hand-stitched excellence on every single surface. You’ve heard the rhetoric before: 400 hours to build one Mulsanne, 12 hours of paint polishing, 150 hours of interior craftsmanship, 37 hours just to add contrast stitching to the fluted or quilted leather seats, and a woodshop with 167 artisans who each spent four years mastering the 17 processes involved within. So yeah, it’s really super nice. And though the exquisite craftsmanship is the same, a few interior touches bring the Mulsanne into the modern age. Well, kind of. 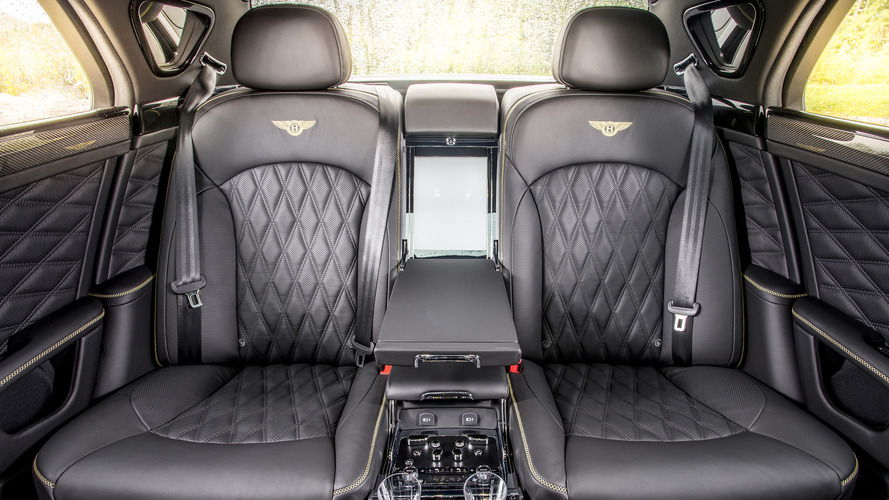 The finest leather hides and wood veneers fit together in elegant style, with a swath of big buttons and knobs, polished trim, and hand-stitched excellence on every single surface.

Improvements for 2017 include a new eight-inch touchscreen infotainment system at the top of the center stack, with a 60 GB solid-state hard drive to store media. Nothing housed within is especially forward-thinking – it feels like a previous-generation Audi system – though the addition of Apple CarPlay keeps up with modern times. Conversely, rear seat passengers get fancy new Android-powered Bentley Entertainment Tablets: a pair of 10.2-inch touchscreens that electronically raise out of the backs of the front seats, with software like Skype, Google Play, Spotify, and more pre-installed, all for $19,855 (for what it’s worth, we have a Ford Focus in the Motor1 fleet right now that’s about the same price).

If rear seat luxury is really your thing, get a load of the new extended wheelbase model that stretches the rear cabin by almost 10 inches and adds airline-style powered legrests to the outrageously comfortable individual chairs. In between there’s an immaculate center console with folding tray tables, lots of storage, power controls for everything, and a chilled box for champagne flutes (duh). Finally, electronically powered blackout curtains are standard for the side and rear windows, should you not wish to be bothered by the harsh and painful reality of the outside world. Bentley added the EWB model for customers who prefer the chauffeured lifestyle and requested the ability to stretch out and sleep on long journeys. For me, being able to recline after a long flight to Europe was a godsend. Everyone should be so lucky as to have a long-wheelbase Mulsanne retrieve them from the airport, though Bentley would prefer that this hifalutin lifestyle only be reserved for the finest set of select few. 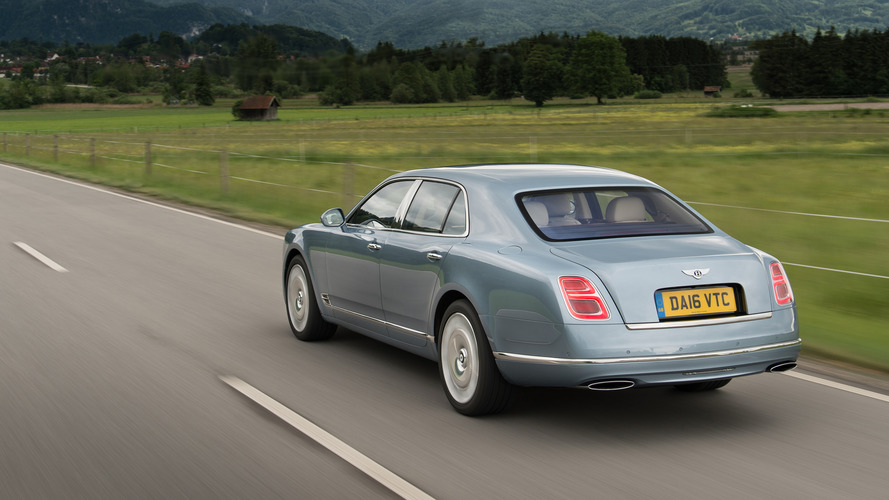 Bentley brings its fantastic, old-world craftsmanship into the present day with a handful of updates that make the Mulsanne better to drive and more luxurious than ever.

Bentley says it with pride: the Mulsanne is “the absolute benchmark in automotive luxury.” And while that’s true in terms of craftsmanship and refinement, my critical eye notes that nothing about the Mulsanne experience feels so far and away better than what you get in the cheaper and much more technologically advanced Mercedes-Maybach S600. I actually think I prefer the Mercedes just because it’s more understated and feels like it’s a few years ahead of the Mulsanne in terms of advanced driver and passenger tech. But I’m not exactly the target customer, and remember, the Mercedes doesn’t have a white-gloved-hand-polished Flying B on the nose.

To put it in a better perspective, the Mulsanne lives in Rolls-Royce Phantom territory, and the experience of driving a Signature or Speed model, or riding in an extended-wheelbase Mulsanne, is much nicer than the aging (but still fantastic) experience of the Rolls. Bentley might not offer the most modern luxury liner in the world, but customers won’t notice. You can argue that some switchgear feels last-generation Passat-spec, but Mulsanne owners don’t even know Passats exist. Bentley brings its fantastic, old-world craftsmanship into the present day with a handful of updates that make the Mulsanne better to drive and more luxurious than ever. Whether a one-percent, dandied millionaire or part of the unwashed masses like me, you won’t mistake the Bentley Mulsanne for anything but what it is: exceptional, exclusive, and one of the finest cars money can buy.