Every BMW built from here on out should follow in the footsteps of the iX.

The all-electric BMW iX feels special from the moment you walk up to it. The futuristic SUV dazzles with a personal light show that manifests gleaming strips of LEDs within the fixtures, puddle lamps at your feet that create a red-carpet effect, and ambient lighting permeates throughout the cabin. It’s all triggered by the phone in your pocket, which by the way, also acts as the vehicle’s key.

For the many questionable decisions the company has made in recent history, BMW got one very right in the new iX. In only that brief walk-up outside of the Munich Airport where we started our test, this fully electric SUV presents like the next big step for a brand that, let's face it, hasn't exactly been the archetype of future mobility.

The iX is futuristic, stunningly styled (inside at least), and surprisingly lovely to drive, as we pilot it from the heart of Munich to the Bavarian Alps. The only thing that might dissuade you from taking one home immediately is the way it looks, and even then, qualms about the funky exterior styling pale in comparison to the elegant and upscale features found elsewhere.

Yes, BMW's controversial take on its iconic kidney grille carries over – tragically for many – from the M3 and 4 Series to the iX. But it actually serves a purpose here greater than just “cooling.” Underneath that elongated schnozz is a new full-range radar system that projects at a distance of up to 985 feet. A “Smart Surface” coating on the grille protects those important pieces of technology with five layers of high-strength materials, including a polyethylene coating that prevents scratches and even offers self-healing properties. Leave your iX out in the sun long enough and the heat will patch up minor nicks and swirls.

A diamond design within the kidneys creates a unique 3D effect, but when you actually put your hands on the grille, all of the elements on the front fascia are completely flush. The door handles are, too. BMW designers sculpted the iX with extreme aero efficiency in mind. So while it's as long as an X5 (195.0 inches to the X5’s 194.3 inches), the iX has a drag coefficient of only 0.25. That means this mid-size SUV is slippier than a BMW i8 (0.26 cD). Impressive.

The in-your-face fascia notwithstanding, the BMW iX does look better in person than in pictures. Sharp body lines on the profile give it a tapered appearance, and the floating roof effect with an embossed “iX” logo is another subtle touch that we quite like. The 22-inch M Performance wheels on this M50 model give it a genuinely sporty appearance too, and the back end is sophisticated with its ultra-slim LED taillights – the thinnest on any production BMW – and two pronounced diffusers at each corner where exhaust tips would theoretically be.

The BMW iX has one of the best interiors the brand has ever concocted. It's crammed with high-end (and recycled) materials and features a stunning, minimalist design that extends from the dash to the second row. The focal point is that massive center screen; the beautifully curved display houses a 12.3-inch digital instrument cluster and a 14.9-inch central touchscreen behind a single continuous piece of glass. And you won't find tactile buttons anywhere atop that glass. BMW shed 50 percent of all knobs and dials over its previous interior design in pursuit of a sleeker look. 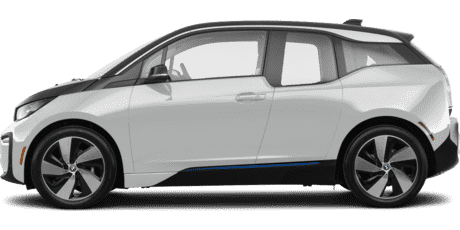 Most of the essential functions, like volume control and drive modes, live on the center console, which juts out from the central storage compartment creating its own floating peninsula. There is no center tunnel that connects the console to the dash, which makes the cabin feel airier. Modern wood and gloss black details adorn said console, with a crystalized start/stop button and beautifully knurled jeweled pieces for the shifter and iDrive controller as well.

Everything within reach feels phenomenal. The gorgeous, high-quality pieces for the shifter and volume knob make otherwise basic functions – like putting the iX into drive and turning up the sound – feel like glamorous experiences. On top of that, the steering wheel has a thin and squircular design that fits perfectly in hand, with simple embedded functions that are easy to use while driving.

The BMW iX has one of the best interiors the brand has ever concocted.

The seats come in three finishes: either a quilted microfiber and fabric combo, Sensatec faux leather, or quilted leather. We spent time with our butts in the latter, which was great, but laying hands on the microfiber and fabric finish had us longing for those materials instead; it’s a unique combination that feels high-quality and comes in a cool Stonegray finish. Beyond that, the seats proved hugely comfortable over a long distance, with plenty of support and easy adjustability via the door-mounted seat controls, a la Mercedes-Benz.

Speaking of Mercedes-Benz – it’s clear that BMW borrowed some inspiration from its neighbors to the northwest with the latest iteration of iDrive. This new interface, dubbed iDrive 8, marks a huge improvement over its predecessor, now with all the features you expect of a premium car such as this.

Augmented-reality navigation is one of the biggest additions to the iDrive portfolio for this year, and it worked flawlessly on German backroads and the many, many roundabouts we encountered. On top of that, wireless Apple CarPlay and Android Auto join the mix, the “Hey, BMW” voice assistant carries over with passenger recognition, and the iX will even offer 5G connectivity in certain regions.

Augmented-reality navigation is one of the biggest additions to the iDrive portfolio for this year, and it worked flawlessly on German backroads.

As for the home screen itself, the layout is clean and concise, with all of the options organized neatly within vertical boxes that display all necessary information at a glance. And thanks to that curved screen, all of those options are easily within reach of the driver and simple to use while on the road, and the screen responds with a smartphone-like response and quickness. But with far fewer buttons compared to iDrive 7, a basic function like adjusting fan speed still requires some digging.

BMW is also the first to market (as far as we know) with an in-car selfie camera. Mounted just above the rearview mirror, the snapshot function allows you to take a photo of the inside of your iX using the “Hey, BMW” voice assistant, and download it onto your phone using a QR code on the central screen. That camera also acts as a remote theft recorder with a USB interface, and the ability to monitor the interior of your car remotely from your smartphone.

Driving the iX is just as alluring as the tech inside. BMW offers two variants of the EV at launch: xDrive40 and xDrive50. The latter was the subject of this test, and it’s the only version that will be available in the US at launch. The xDrive50 is powered by a 111.5-kilowatt-hour lithium-ion battery pack with a usable capacity of 105.2 kWh, while the xDrive40 model usees a smaller 76.6-kWh pack. With two electric motors – one mounted on each axle – the xDrive50 produces a combined output of 516 horsepower and 564 pound-feet with standard all-wheel drive.

This is the fifth iteration of BMW’s eDrive technology, and it marks a 40-percent density improvement over the 2020 i3. BMW estimates that the iX will be able to achieve about 300 miles of range in the US, but the EPA hasn’t confirmed that figure. And the company says that recharging from 10 to 80 percent on a DC fast charging plug at a rate of up to 195 kilowatts should only take 35 minutes. We’ll know all the official info on charging and range closer to its on-sale date.

Driving the iX is just as alluring as the tech inside.

The iX is genuinely speedy, blasting off the line with gobs of linear torque and just enough quickness to put you firmly into the seatback. It takes 4.6 seconds for the electric SUV to hit 60 miles per hour, which is slower on paper than a true performance SUV like the BMW X5 M, but it feels similar in quickness according to our butt dyno.

Find an unrestricted stretch of Autobahn – as we did – and the iX keeps that perfectly linear stream of power going all the way to its electronically limited top speed of 125 mph. And it sounds good, too; BMW tapped legendary composer Hans Zimmer to come up with the retro-futuristic “exhaust note” for the iX when accelerating in Sport mode.

In the corners, the BMW iX delights. With the optional Dynamic Handling Package equipped, the mid-sizer feels exceptionally nimble, cornering with precision and quickness unusual for such a large vehicle, offering limited body roll and a boosted but accurate steering feel. Think of the iX as an oversized i3; the agility is that of a much smaller electric SUV, and the evenly distributed, low-mounted battery pack gives it a nice center of gravity.

In the corners, the BMW iX delights.

Beyond that, the new cameras and radar systems within that massive grille fixture afford the BMW iX a highly advanced suite of active safety features. ​​Five cameras, five radar sensors, and up to 12 ultrasonic sensors give the iX a crystal clear picture of its surroundings. The available Parking Assistant Pro adds a 360-degree surround view, as well as front- and rear-facing cameras (the latter hidden within the badge itself).

On the Autobahn, we ticked the driver assistance button on the steering wheel, which activated steering assist and lane centering, as well as adaptive cruise control with stop-and-go functionality. BMW systems were solid before, but the iX brings those driver elements to the next level with perfect lane centering, smooth braking and acceleration, and the ability to navigate seamlessly around trickier turns.

BMW asks $82,300 plus a $995 destination charge for the iX xDrive50 in the US (the only trim available in year one), with deliveries expected to begin early in 2022. That does make the electric SUV noticeably more expensive than the equally sized, gas-powered X5, which costs $59,400, but the iX is still more affordable than the Tesla Model X ($99,990). Options like leather ($2,450), the Dynamic Handling Package ($1,600), and some of the active safety features do hike the price, putting our tester somewhere in the neighborhood of $98,000 – but what you get for that price is a BMW unlike any other.

While we’ve really only scratched the self-healing surface of the new BMW iX in our short test, this electric SUV is something special. The cabin is gorgeous, the technology is unparalleled, and the drive experience is better than you might expect for such a sizable SUV. BMW went all-in on electricity with the new iX and it shows – hopefully the rest of the lineup follows this fantastic new blueprint.