2021 Toyota RAV4 Prime Review: No Reason Not To

The plug-in hybrid RAV makes the most sense.

The hype surrounding battery electric vehicles might lead you to believe that gasoline is going away soon. Our motoring future is undoubtedly an electric one, but infrastructure chokeholds and further product development needs put that realization a few years down the road. In the meantime, plug-in hybrid options make more sense for many buyers than full EVs, and the 2021 Toyota RAV4 Prime is among the best of them.

Plug-in hybrids are generally more expensive than similar gas-only cars, and their battery packs often intrude on cargo space. And in many cases, the minuscule amount of electric-only range they offer isn’t enough to make up for those faults. The RAV4 Prime, though, addresses these complaints head-on with attractive pricing (thanks to its federal tax credit eligibility), equal utility compared to the standard RAV4, and a surprisingly large EV-only range that, for many, could mean only a few trips to the gas stations per year.

For many, the RAV4 Hybrid still makes the most financial sense, but for those with access to regular home charging and a short commute, we think the Prime is the way to go.

A vehicle’s ratings and verdict are relative only to its own segment and not the new-vehicle market as a whole. For more on how Motor1.com rates cars, click here.

The RAV4 Prime’s design is a bit of a mixed bag. We admit it’s more handsome than the Ford Escape PHEV or Honda CR-V Hybrid, but it stirs far less emotion than the new Hyundai Tucson, for example.

Our test car came in XSE trim, which carries a $3,300 premium over the lesser LE but looks much better. The XSE brings a two-tone paint scheme, in this case, fun Supersonic Red paint contrasted by a black roof, A-pillars, and wheel arches. The 19-inch five-spoke wheels are also an upgrade and do a good job in making the Prime look more premium and less economy.

Inside is a sea of drab black with only a few red accents breaking up the monotone theme. Functionally, the layout is clean with a 9.0-inch touchscreen sitting atop the dash and big HVAC dials directly beneath. There’s also a nice storage slot on the dash just ahead of the passenger to stow a phone or other loose items. 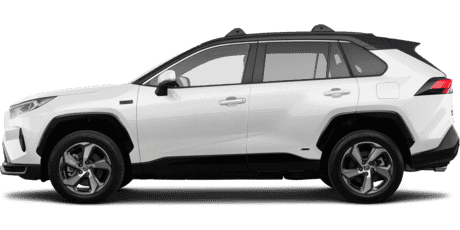 With a few exceptions, the RAV4 Prime passes the comfortable crossover test with flying colors. Included in the XSE Premium Package are nice features like a heated, leather-wrapped steering wheel, heated and ventilated front seats, and heated rear seats. We also appreciated the large panoramic glass roof and a smart key system that allows you to unlock the car with any of the doors, not just the front two.

Apart from the steering wheel, this is a leather-free interior. The seats come trimmed in SoftTex, which we’ve complimented many times in the past for being darn-near as good as real leather. It’s soft, comfortable, and stands up pretty well against a spilled cup of coffee – ask us how we know. The Prime is expensive enough to warrant more seat adjustability than the included four-way power, but it’s still easy to get comfortable, especially thanks to the supportive side bolsters.

The coolest thing about the car’s design is the clever packaging in the cargo area. Toyota managed to fit the massive 18.1-kWh battery pack completely below the trunk floor, so there isn’t a space penalty. With the second row in place, the Prime offers 33.4 cubic -feet of space, and up to 63.1 cubes with those seats folded. This stacks up nicely against chief rival Ford Escape PHEV’s 34.4/60.8 cubic-foot capacity.

Our highest praise goes to the Prime’s fantastic on-road ride. Though its suspension layout is no different from other versions of the RAV4 we’ve driven, the Prime feels more composed and calm to drive. Maybe it’s the extra weight from the low-mounted battery pack, but this RAV4 does an excellent job of defeating the nastiest stuff that South Florida roads have to throw at it.

We’re also impressed by the volume of wind noise that enters the cabin, which is low, save for highway driving under electric power, where the gas engine isn’t available to drown out the sound. Only in that scenario does the Prime get noisy. This car is refined to levels that knock on the door of luxury crossovers; well done, Toyota.

Every RAV4 Prime comes standard with a 9.0-inch touchscreen, including Apple CarPlay and Android Auto. Toyota ties the upgraded audio system to the Navigation package, and the pairing costs $1,620. We say no deal, though, because the in-house navigation is not nearly as intuitive as what your phone can do, nor is the 11-speaker JBL setup fantastic. But just as with the many other RAV4s we’ve driven, the infotainment is generally easy to work with, if a little slow to respond from time to time.

Baked into the Premium package are a few worthwhile upgrades that jazz up the Prime’s tech capabilities. A 10.0-inch head-up display, wireless charging pad, and surround-view camera all come along when you tick that option box. The RAV’s head-up display doesn’t look all that clear and lacks the configurability that we’d like to see. However, the surround-view camera looks crisp and makes parking a much easier occasion.

Hilariously, the Toyota RAV4 Prime is the second quickest car in the brand’s lineup, only trailing the Supra. It’s quicker than the 86 sports car, and ditto the Camry and Avalon TRD models, which is part of what makes the RAV4 Prime so lovable.

Powered by a 2.5-liter four-cylinder and two electric motors, total system output is a hearty 302 horsepower. Even for a 4,400-pound porker like the Prime, that is plenty of shove to get it moving. Toyota says you’ll hit 60 miles per hour in just 5.7 seconds, and we’re not inclined to say otherwise.

Time and time again, the electrified crossover put a smile on our face with short highway blasts. After a few moments of pedal-down driving, the torque runs dry and the Prime feels more like its gas-only sibling, but off the line, this car is unexpectedly quick. Having driven just about every version of the RAV4, we believe that the Prime is easily the most lively from behind the wheel.

Aside from the plentiful power, though, the Prime isn’t going to set your hair on fire. Keeping in mind that it competes against a class of rather dull vehicles to drive, this isn’t really an issue. Toyota tuned the steering to be calm and well-mannered in everyday driving situations – very light from lock to lock. This car might be quicker than an 86, but it sure as heck doesn’t handle like one.

Toyota Safety Sense 2.0 comes standard on the RAV4 Prime. With it comes automatic emergency braking, adaptive cruise control that works to zero mph, lane-keep assist, and blind-spot monitoring. Save the surround-view camera, every important piece of safety kit on this car comes standard, which factors into its high score.

We’ve found the system in the past to be good at its job. Using the adaptive cruise control only takes two button pushes, and works well to monitor the cars in front and behind. Toyota’s lane-keeping tech isn’t as smooth as some others, but it works well keeping the car centered in the lane.

The National Highway Traffic Safety Administration hasn’t crash-tested the Prime yet, but the similar RAV4 Hybrid scored five stars overall, giving you an indication of how safe the car is.

Fuel-sipping efficiency is the single biggest reason to buy this car, and in this regard, it flourishes. With a drained lithium-ion battery, the Prime still achieves a respectable 40 MPG city, 36 highway, and 38 combined – that said, a regular RAV4 Hybrid gets 41 city, 38 highway, and 40 combined owing to its lighter weight. However, with the 18.1-kWh pack brimmed, the Prime will do 94 MPGe and travel on EV power alone for 42 miles.

That latter figure is the one to focus on here. With over 40 miles on tap, most people’s daily work commute should be doable without using a drop of gas. In our real-world test, including predominantly city and some highway driving, we saw 43 miles of EV range. Among all plug-in hybrids on the market, crossover or otherwise, this amount of range ranks near the very top.

If you have access to regular charging, the Prime should be a strong consideration, despite being more expensive than the hybrid. Juicing up to full range takes 4.5 hours at home with speeds of 3.3 kW or 2.5 hours if you’ve chosen the faster 6.6 kW capability available on the XSE model. The RAV4 Prime runs on 87 octane fuel.

Let’s put that low pricing score into context with some explanation. The RAV4 Prime XSE starts at $41,425 (although some dealers are asking more). There are two add-on packages available, and this test car features both of them. Adding navigation comes along with the JBL premium audio system for $2,435.

Or, the XSE Premium takes that combo and goes further with many of the aforementioned options like heated/ventilated seats, wireless charging, and a panoramic sunroof for $5,760. The Weather package with heated steering wheel and rain-sensing wipers for $375, along with the $425 shade of Supersonic red paint and destination charge bring us to a total price of $49,831.

Though the Prime doesn’t currently have any direct competitors that are on sale, the segment will be getting more crowded soon. Ford’s delayed Escape PHEV will cost $32,650 and Hyundai has yet to reveal the cost for the upcoming 2022 Tucson PHEV.