The Infiniti Q60 Red Sport’s best features are on the outside.

The 2020 Infiniti Q60 Red Sport looks good on paper: 400 horsepower, rear-wheel drive, and a competitive starting price. And once you actually see it, boy does this car look good. But stats and style only take you so far in this segment – once in the driver’s seat, it's pretty clear the Q60 Red Sport doesn't do what you want a so-called “sporty” luxury coupe to do.

The biggest issue remains the Q60's drive-by-wire steering, which we've criticized in the past for being lifeless and vague. That setup carries over into 2020 totally unchanged. The Q60 Red Sport also falls flat in the agility and technology departments, lacking many of the same advanced features that its competitors do. While it may be the most visually appealing option in the class, good looks can only go so far.

Infiniti absolutely nailed the look of the Q60, especially the more aggressive Red Sport 400 model we tested. The Red Sport’s exclusive 20-inch wheels, red brake calipers, and trim-exclusive Iridium Blue paint job build atop an already attractive base. Even the entry-level Q60 gets big bulging fenders, chrome accents around the “double-arch” grille and windows, and a flowing silhouette that extends into a fastback-like rear. It's just a handsome car all around.

The inside of our Q60 wears a gorgeous Monaco Red leather. Bonus points to Infiniti for the ability to mix Iridium Blue with Monaco Red – it's a fantastic color combo. On top of that, the Q60 gets carbon fiber trim on the center console, black leather with red stitching on the dash and steering wheel, and a few high-quality aluminum fixtures elsewhere. There are some cheaper-feeling plastic buttons on the center console – ripped from a lesser Nissan – but they're a minor offense given the much nicer surrounding finishes.

Even with the Red Sport's 20-inch wheels and low-profile tires, the Infiniti Q60 has sublime ride quality. The adaptive dampers soak up imperfect pavement like a sponge, and even in the firmer Sport or Sport Plus modes, ride quality remains pretty plush. Two form-fitting leather bucket seats further help bolster our butts, offering great cushioning and support for both the driver and front passenger.

Sound deadening is another strong selling point of the Q60. Even at highway speeds, little to no wind or road noise penetrates the cabin. The only thing we heard on our Red Sport tester was the subtle note of the upgraded exhaust (and it sounds great).

Like most coupes, though, the backseats in the Q60 are tight – accessing them is a mission. You have to wait for the electronically folding front seats to move forward just enough so that you can squeeze into the tight rear entryway. And once seated, legroom and headroom are pretty limited; the 34.5 inches of rear headroom and 32.4 inches of rear legroom are below average for the class.

Infiniti's InControl dual touchscreen display isn't our favorite. This setup feels outdated, with the upper 8.0-inch touchscreen displaying mid-2000s-esque graphics – the navigation looks especially old – and the 7.0-inch lower unit offering a jumbled and confusing home screen layout. This is pretty much the same pairing that debuted on the car in 2013.

That said, Infiniti did recently update the system with Apple CarPlay and Android Auto, which make a noticeable difference. While we've been critical of dual touchscreen setups in the past – and this one certainly isn't perfect – having two screens actually makes sense here. CarPlay projects onto the upper screen while the Infiniti infotainment system lives on the bottom, meaning you can run Apple Maps up top and still control things like audio down below. It's all pretty seamless.

The Q60 does lack some advanced features found in other newer cars in the class, like wireless charging, a head-up display, and a digital instrument cluster. But the Red Sport model comes standard with a Bose 13-speaker sound system, two illuminated USB ports in the center console, and a small screen within the instrument cluster that displays info like vehicle status and distance to empty. 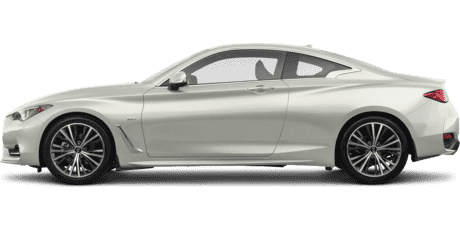 The Infiniti Q60 Red Sport's twin-turbocharged 3.0-liter V6, good for 400 horsepower and 350 pound-feet, is a great engine. It has practically no turbo lag and offers a strong, linear stream of thrust all the way up to the 5,200 rpm redline. Infiniti quotes a 0-to-60 mile-per-hour time of 4.5 seconds, and even in the Standard drive mode, the Q60 feels quick off the line. In Sport mode, the throttle gets even touchier and the seven-speed automatic gets crisper, while Sport Plus notches that up even further. Sport Plus might even be a bit too aggressive – save that mode for the track.

Unfortunately, the powertrain is the lone bright spot. The rest of the car feels a bit too bland for a mid-range performance option. Infiniti’s Direct Adaptive Steering (the company’s name for drive-by-wire steering) is our least favorite aspect. There's no direct connection between the column and the front axle, which makes the steering incredibly light and vague, with a huge dead-on center feeling. Sport and Sport Plus modes bulk the feel up a bit, but it's still not enough.

The Q60 doesn't feel especially dynamic, either. The adaptive suspension emphasizes comfort over handling – even in the most aggressive modes, the ride is still pretty cushy – but this car just feels dull when you fling it into a corner, the opposite of what you'll get on most of the alternatives.

The Q60 Red Sport doesn't get many standard safety features. Automatic emergency braking with pedestrian detection is standard, as are automatic LED headlights, a blind-spot monitor, rain-sensing wipers, and a 360-degree overhead camera. But that's about it. Those features are optional on other trims as part of the ProAssist package, but they're standard here.

You can get a $2,850 Proactive Package, which adds adaptive cruise control, lane-centering, blind-spot monitoring, and high-beam assist, but our car lacks those features. We wish it didn't, though; while the Q60 sure looks sleek, it has sub-par sightlines. The rear window is tiny – at least the backup camera is pretty good – and the greenhouse is small, too, which makes side visibility an issue.

The Infiniti Q60 Red Sport achieves 20 miles per gallon city, 27 highway, and 22 combined – which puts it on the lower end of the spectrum for the class. By comparison, the Audi S5 and Lexus RC 350 both get 23 mpg combined, while the Mercedes-AMG C43 gets 22 mpg combined. Like its competitors, the Red Sport’s high-powered V6 also requires premium fuel, which is another ding against the Infiniti in the fuel economy department.