Is The Toyota Avalon TRD A Real Sports Sedan? 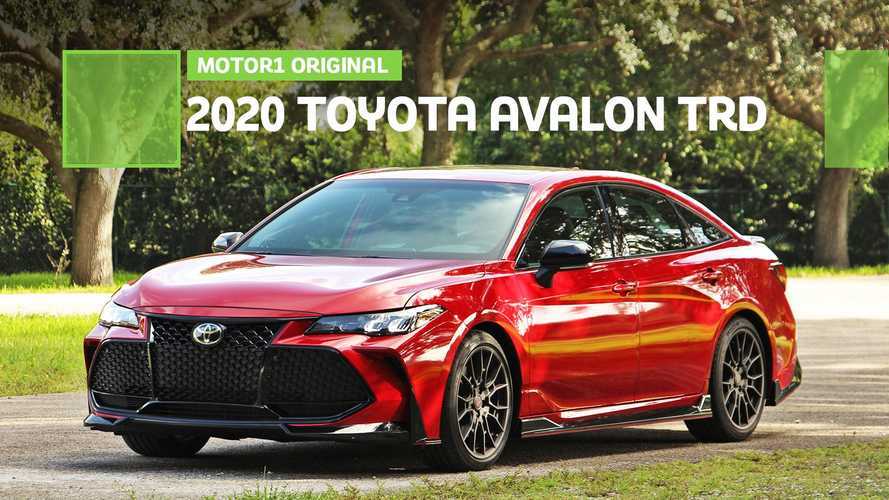 We spend a week with the sportiest Avalon to see how it performs under pressure.

We're well past the glory days of the sports sedan. But a few solid options do linger for the family man looking to go fast and corner hard. Toyota, in particular, has three sporty-ish four-doors to pick from in 2020: The Camry TRD, the Corolla Apex (coming later this year), and our subject, the Avalon TRD.

Of the trio, the Avalon is certainly the oddest option to get the TRD treatment. As crossovers and SUVs push consumers out of big sedans in general, the Avalon is not immune and its poor sales reflect that. Still, the company believes that its family-sized four-door is deserving of a sporty option, perhaps for one final hurrah. Toyota's hope being that this more aggressive take will woo buyers – specifically younger buyers – away from high-riding alternatives.

And on the surface, there is a lot to like about this car. The Avalon TRD gets a more aggressive look, special suspension tuning from the brand's racing division, and some nicer treatments inside. But it demands the question: Is the Avalon TRD a genuine sports sedan, or is it just dressed up in a fancy outfit? We spent a week with it to find out.

This probably won't be a popular opinion (feel free to leave angry comments below), but the Toyota Avalon TRD looks tough as hell. A low stance, matte-black 19-inch wheels, new body molding, and red pinstriping – all exclusive to this trim – make it the meanest-looking Avalon we've ever seen. Granted, the vacuum-like grille still isn't its best feature, but the massive opening looks a bit better with bigger side vents and a new gloss black splitter.

What's better is that the Avalon TRD somehow looks both aggressive in this grade, yet still feels upscale like the rest of the trims. The Avalon has a presence, due in part to its massive size and sculpted profile, combined with high-end treatments like LED headlights and a full-width rear light bar. In our time with the car, some people actually mistook it for a Lexus.

The inside of the Avalon TRD is equally as attractive. This model doesn't get leather – you'll have to upgrade to Touring or Limited for the real stuff – but the two-tone black-and-red Softex faux hide is nearly as good. The sport seats are soft and supportive, with appropriate TRD branding stitched into the headrests. And for the first time ever on the Avalon, you get red seat belts. So at a minimum, the Avalon TRD at least looks like a sports sedan.

Sluggish In A Straight Line

The Toyota Avalon TRD is not fast. Its 3.5-liter V6 – the same one you get in the Camry and base Avalon – produces a modest 301 horsepower and 267 pound-feet. For a car that weighs 3,683 pounds, that doesn’t feel like enough by modern performance standards. The comparably priced Kia Stinger GT, for example, gets 365 hp with the help of two turbos. And that car feels genuinely quick where the Toyota simply doesn't.

The Avalon doesn't put down power exceptionally well, either. There's a slight delay when you gun it, and at highway speeds, the V6 struggles. We lay blame both on the eight-speed automatic – it’s just lazy and doesn’t respond – and the fact that the V6 needs some extra horses. Peak horsepower doesn't hit until way up in the rev range at 6,600 RPM, and max twist doesn't show up until 4,700 RPM. Relative to other naturally aspirated V6s, those numbers are… not great.

That said, the Avalon TRD does feel decently zippy around town in the right mode. Toss it into Sport and keep the revs above 3,000 RPM – that's the sweet spot for this car. Using the paddle shifters improves responsiveness from the otherwise sluggish gearbox; it kicks down more quickly and upshifts with some immediacy. And the TRD exhaust sounds perfect – the noise from the dual exhaust tips is just burbly enough.

Not A Canyon Carver, Either

Front-wheel drive and a 3,683-pound curb weight do not a performance sedan make, by most standards. But TRD engineers did their damnedest to reduce body roll and understeer by ditching the XSE model's cushy adaptive suspension. The fixed suspension on the Avalon TRD is stiffer (by 10 percent in the front and 50 percent in the rear compared to the Touring model) and lower by about half an inch. What’s more, the TRD gets trim-specific underbody bracing to help the suspension do its job with less body flex. And it works, sort of.

The Avalon TRD handles pretty well for a car of its size. When we autocrossed it back in September 2019, we noticed a huge difference between the TRD and XSE models – and it still feels good here. There's a bit of body roll, but the Avalon TRD corners flatter and more aggressively than you might expect. In Sport mode, the steering is very heavy – maybe too heavy – but it's generally responsive and delivers good feedback from the road. And as mentioned, Sport mode also improves throttle response.

Unfortunately, the Avalon TRD still feels every bit as big as its curb weight suggests. The front wheels claw at the pavement in search of grip, and there's a ton of understeer. Better rubber would probably help, too; the TRD model gets the same all-seasons as the XSE and Touring models (P235/40R19).

Toyota went all out on the suspension and noticeably improved the styling, but why did engineers stop (pun intended) at the brakes? To its credit, the TRD does have the biggest front discs of any other Avalon, at 12.9 inches versus 12.0 inches. But the rear discs are the same 11.0 inches you get elsewhere in the range, and nothing else changes, other than fancy red caliper paint.

This car could really use better brakes. Again, the Avalon’s weight proves to be an issue for the relatively puny discs and rotors that it gets out of the box. You really have to bury your foot into the pedal to get the Avalon back down from a high speed. Even around town the brake pedal feels slushy and requires a good amount of force.

Is the Toyota Avalon TRD a real sports sedan? No, not really. It's too slow, its brakes are too soft, and while the suspension is noticeably improved, the Avalon still doesn't handle as well as some of its nearest competitors. But that's not to say we don't like this car – in fact, the Avalon TRD is perfectly charming despite its flaws.

The fact that this car (and to a lesser extent, the Camry TRD) even exists in the first place means that Toyota still cares about building fun vehicles. And while the Avalon TRD may not be the fastest or most nimble, it does exactly what you want, and then some. This sedan is still supremely comfortable, very spacious, and fuel-efficient – adding TRD pieces only makes the drab Avalon actually interesting for the first time.

We Drive Both Toyota TRD Models: