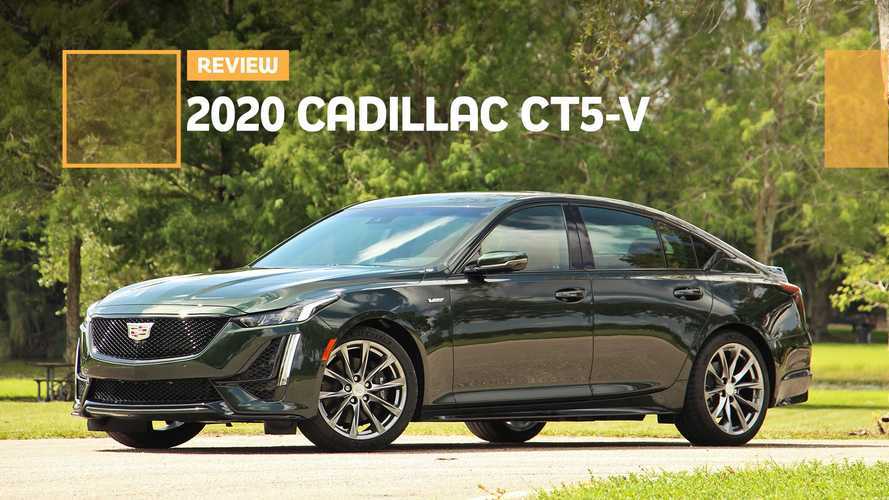 A solid sports sedan in a segment loaded with better options.

The 2020 Cadillac CT5-V is a good car. It drives well, sounds great, and has most if not all of the safety and convenience features you’d expect from any vehicle in this class. But in an age where companies are slashing sedans in place of SUVs – sporty and luxurious ones, in particular – the CT5-V needs to be better than good to stand out, it needs to be great. And it's just... not.

Cadillac missed the mark here in a few key areas. The CT5-V isn't especially interesting to look at, nor is it the most fuel-efficient or affordable option – which, believe it or not, customers actually care about. But the most damning evidence is under the hood: Cadillac’s latest V car produces just 360 horsepower.

There are two things we really like about the CT5-V's exterior styling, the first being its overall profile. The sharp roofline and tapered edges give the CT5 a sleek sportback-like shape (even though it's not). We also really like our tester's Evergreen Metallic paint job – a $625 option. The deep green hue looks fantastic, transitioning from darker to light depending on the angle of the sun. It's surprising, actually, that Cadillac offers this very good, very un-Cadillac paint option. But it's one of the few things to gush about.

The CT5-V looks pretty generic elsewhere. The front fascia is bland, with one or two too many vents, the shiny black plastic trim around the windows feels cheap, and the rear styling is nothing to write home about. If anything, the CT5's generous amount of rear overhang makes it look heavier than it actually is.

Pull the too-kitschy touch-capacitive door handles, and there's even less to like about the CT5-V inside. There are hard plastic and flimsy buttons everywhere, with cheap rubberized coating on the door handles and center console. The two off-center knobs below the 8.0-inch touchscreen feel like afterthoughts (and are duplicates of knobs with the same functions lower down), and even the Sedona Savauge leather seats are nice, but they lack the quality and feel of some better leather options in the class. On a car that costs more than $63,000 as tested, this interior should be much nicer.

GM's fourth-generation Magnetic Ride Control (MRC) system gives the CT5-V a sublime ride. Standard on the V-Series model (but unavailable elsewhere within the CT5 lineup) MRC smooths out uneven pavement and absorbs even the more unforgiving undulations and speed bumps. Paired with solid sound deadening, the CT5-V feels very comfortable at both low and high speeds.

The premium leather seats are a whopping $6,290 as part of the Platinum Package, replacing the standard black leatherette. Those seats are decently supportive with eight-way power adjustability on the driver's side, four-way lumbar support, and a thigh extender. The CT5-V also feels relatively open and airy from the driver's seat, with good visibility both front and back.

The front compartment certainly doesn't lack for space, with a solid 39.0 inches of headroom and 42.4 inches of legroom – competitive with other cars in the class. The back row, meanwhile, offers 36.6 inches of headroom and 37.9 inches of legroom. Again, that's competitive with the rest of the class. But the CT5-V's 11.9 cubic feet of trunk space is the worst of the bunch; even the shorter Mercedes C-Class has more trunk room (12.6 cubic feet).

The CT5-V gets a standard 10.0-inch touchscreen and a 15-speaker Bose audio system. On lower trims, both of those cost extra. Apart from the chintzy faux-chrome surround, the touchscreen itself looks nice, responds quickly to inputs, and has a clear and concise home screen. It also gets 4G LTE Wi-Fi connectivity, Apple CarPlay, and Android Auto at no extra cost, though smartphone mirroring still requires a wired connection.

The head-up display and 8.0-inch digital instrument cluster on our tester are a $1,300 option as part of the Driver Awareness Plus package (a larger digital cluster is coming in 2021). Both features offer crisp readouts for things like audio streaming and safety features, and the instrument cluster is highly configurable. But the duo does show a lot of the same information.

With the $6,290 Premium package – which includes the Parking package, a $2,090 option on its own – the CT5 gets a sunroof, heated power-folding mirrors (that are very slim), and a rear camera mirror. A toggle underneath the rearview mirror turns it from a traditional mirror to a camera, something we've seen previously on GM products. The camera works well, displaying a crystal clear picture and a wider perspective than what's visible out of the normal rearview mirror – plus no blind spots. The change in perspective – from mirror to camera – can be a bit odd at first, but you do get used to it.

This is where the CT5-V shines, or at least... feels above average. The twin-turbocharged 3.0-liter V6 is a fantastic engine. Punchy and direct, the powertrain has tons of mid-range pull and delivers a steady stream of torque all the way up to its 6,000 RPM redline. The CT5-V's 360 horses and 405 pound-feet may not sound like much on paper, but there's still plenty to like about the way this car puts power down – and the way it sounds. Even in Touring mode, the quad exhaust provides a nice pop at every shift that echoes throughout the cabin. Our only issue with performance is responsiveness off the line; it does take a second for those two turbos to spool up, and max twist doesn't arrive until 2,400 RPM. That said, the CT5-V still gets to 60 in a competitive 4.6 seconds.

As mentioned, GM's latest version of Magnetic Ride Control comes standard. And not only does that give the CT5-V a nice ride, but also impressive agility. Aided by GM's Alpha platform – same as you get on the Chevrolet Camaro and the outgoing ATS and CTS – the CT5-V has phenomenal poise. Finding the right entry point into a corner is easy thanks to a firm but communicative steering rack (especially in Track mode) and the stiff structure, which keeps the CT5 flat and composed all the way to exit. In fact, the more you push CT5 the better it feels, as if Magnetic Ride Control performs better pressure. The tires can get a bit squirrelly on the rear-wheel-drive model we tested, but that only adds to the fun.

But the CT5-V isn't perfect. The 10-speed automatic lacks the decisiveness of some other gearboxes, especially on downshifts, and the power-assisted steering has an unlikable springiness to it. It's almost as if there are rubber bands forcing the steering wheel back to center (although not every editor disliked the steering).

The CT5-V gets low-speed automatic emergency braking, blind-spot monitoring, pedestrian detection, rear cross-traffic alert, and park assist all standard. The Driver Assist and Advanced Security package ($1,950) adds adaptive cruise control with stop-and-go, high-speed automatic emergency braking, and rear automatic emergency braking. Baked into the $6,290 Platinum Package, meanwhile, is the Parking package, which adds rear pedestrian alert, parking assist, and a 360-degree camera, while the Driver Awareness Plus package ($1,300) adds a distance indicator and lane-keep assist. Bottom line: this Cadillac is well-equipped, even though you do have to pay for many of those features.

In our test, we found the adaptive cruise control with the lane-tracing option to be a nice companion on the highway, keeping a steady pace to vehicles ahead of it and providing modest steering assist, but nothing overly intrusive. The 360-degree overhead camera and parking assist features also worked well by offering a clear picture of their surroundings, and the backup camera delivered a crystal clear readout.

At 18 miles per gallon city, 26 highway, 21 combined, the rear-wheel-drive Cadillac CT5-V gets the worst fuel economy in the class – even against some all-wheel-drive alternatives. The BMW M340i achieves 25 combined, the Audi S4 gets 23 combined, and the Mercedes-AMG C53 gets 22 combined, as does the Infiniti Q50 Red Sport. Plus the Cadillac only drinks the premium stuff, lowering its score a point

The problem, though, is that the CT5-V pictured here has a ton of options – $14,355 worth of them, in fact. The $6,290 Premium package, $4,190 V Premium package, $1,950 Driver Assist package, and $1,300 Driver Awareness Plus package bring the total asking price to $63,045. And many of those poorly packaged options, like leather seats, navigation, and adaptive cruise control, come standard on most of the alternatives mentioned above. 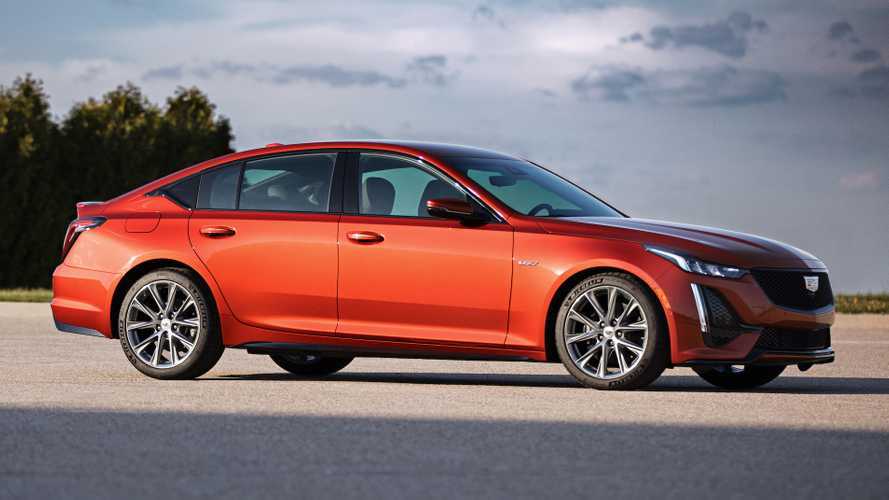