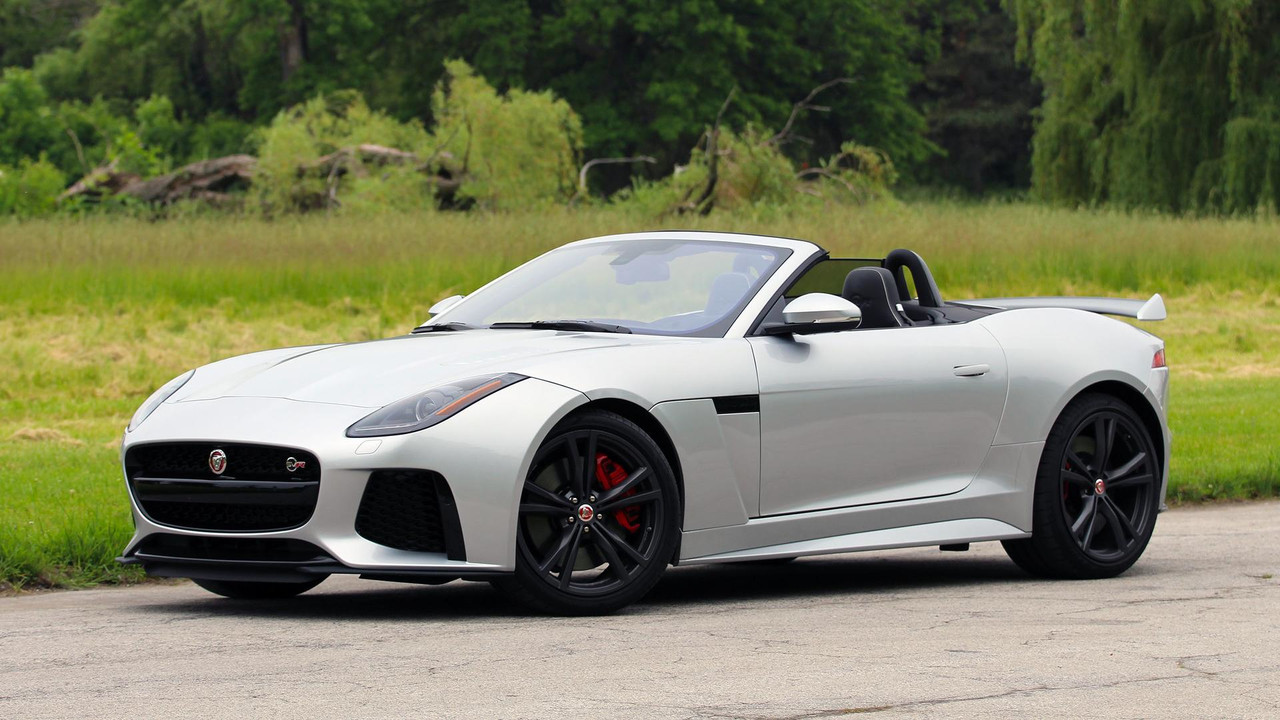 An exercise in excess, Jaguar’s 575-hp F-Type is even more enjoyable with its top off.

The Jaguar F-Type does everything well – it’s so fast, so comfortable, and rewards the driver with an experience that stimulates so many of the senses. And with the SVR variant, every great thing about the F-Type experience is brighter, louder, more engaging.

So, what could be better, you ask? Well, this, the F-Type SVR Convertible. Take everything that’s great about Jag’s lighting-fast coupe, add a dose of sunshine, and crank up the volume on that incredible exhaust. My followup test of the SVR may swap California beauty for Detroit grit, but I had no trouble falling in love with the SVR all over again.

Dressed to kill. Everyone loves an F-Type. Even in this decidedly drab color combination of silver over black wheels, the pretty Jag turns heads everywhere it goes. It’s your classic sports car – long hood, short rear deck. Nothing about the design is overwrought or aggressive. It’s both elegant and menacing at the same time, and years on, the F-Type looks just as gorgeous as it did the first time I saw it. That wing, though... well, I’ll get to that in a minute.

Powerrrrrrrr. The SVR uses the same supercharged 5.0-liter V8 as the F-Type R, but it adds 25 horsepower and 14 pound-feet of torque. That’s not a ton, sure, but it means output levels are a staggering 575 hp and 516 lb-ft. Jaguar estimates a 0-60 time of 3.5 seconds for this all-wheel-drive convertible, and it’ll run all the way up to 195 mph on the top end. From behind the wheel, the Jag feels blisteringly quick. It wags its tail when you accelerate hard from a stop, and provides gobs of power for flying out of a corner.

More than straight-line speed. This is a great car to drive, with nicely weighted steering and a firm but not back-breaking chassis. Competitors like a Porsche 911 might offer more track-focused precision, but the Jaguar feels like a proper muscle car by comparison. Don’t let the all-wheel drive setup fool you, either – in its default setting, the SVR sends 90 percent of its power to its hind legs.

Girl’s got pipes. Jaguar uses a titanium, split-muffler exhaust on the SVR that’s different from other F-Type models. Not only is it 35 pounds lighter than the normal F-Type R’s setup, it has a sharper, higher-pitched tone. It’s a bit harsher, more brash for sure. But it snaps, crackles, and pops with ferocity that makes you want to hammer the throttle from every stoplight. As far as I’m concerned, the F-Type SVR has the greatest exhaust note in the world.

Get the convertible. The last time I drove Jag’s ripsnorting SVR, it had a fixed roof. That’s all well and good – the coupe looks absolutely stunning. But there is nothing, nothing like firing up the roadster’s engine from a cold start with the top down. As far as morning stimulants go, it’s better than coffee. Sure, you get a lot more luggage space with the coupe, but I had no problem putting a carry-on suitcase and a backpack in the trunk of this convertible.

A literal spoiler. As I outlined earlier, the F-Type is an absolutely gorgeous machine, and all the wider events and bigger bulges of the SVR do nothing to ruin the shape. That spoiler, however, is an eyesore. I’m sure the active rear wing is great at producing extra downforce when you’re flying at warp speed. But for those of us whose daily commutes don’t involve an autobahn, a wing-delete option would be nice. It looks tacked-on and tacky, all of the time.

Is it worth it? The biggest counterpoint to the SVR argument is that Jaguar’s F-Type R is already so great. Remember, the SVR only adds 25 hp and 14 lb-ft of torque to the R’s 5.0-liter V8, though it does shave 55 pounds. The SVR sounds a little better, but the R will still wake your neighbors with ease. And without driving the two cars back to back, I’m not sure the SVR is so much better that it’s worth the $20,000 price premium; as-tested, this car costs $132,233. Plus, the R doesn’t come with that stupid wing, so...