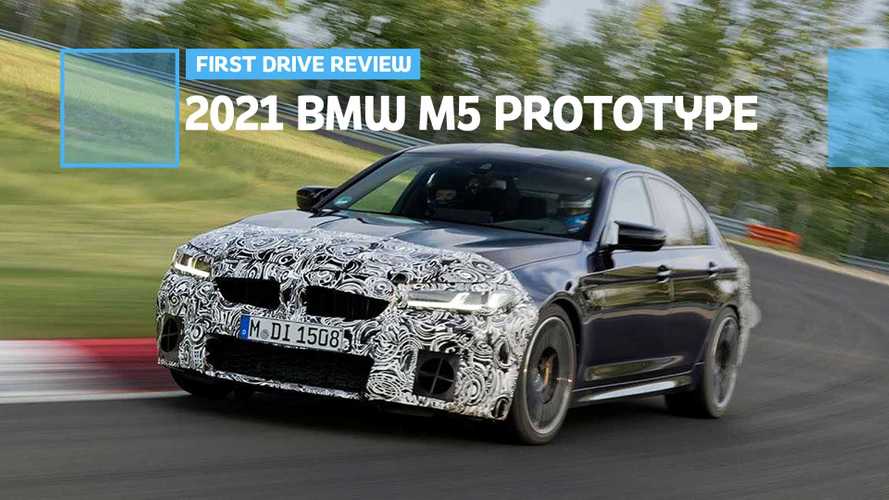 Ever wonder how BMW updates its high-performance M cars?

I’m in the passenger seat of a camouflaged BMW sedan and my right hand is clutching the door handle, my knuckles white. In the long history of the door handle, seldom has a specimen been squashed more than this poor thing.

The combination of M chassis developer Jörg Weidinger, the legendary Nurburgring Nordschleife, and a prototype of the facelifted M5 is bad news for both your stomach and any attempt at maintaining a serious facial expression. If I didn’t know the Nordschleife so well, BMW would probably have to change the seat covers after this ride. In other words, the updated M5 is great.

The kind folks at M GmbH were kind enough to invite me to a so-called “pre-ride” with the M5 LCI. LCI (Life Cycle Impulse) is the Munich-based company's marketing term for model facelifts, and since the current M5 will soon mark its third anniversary on the world’s roads, it’s high time for a proper LCI. We already have some idea of how the M5 will look after seeing the facelifted 5 Series on which it’s based. Kidney grilles, headlights, and taillights will change slightly, as will the lower bits of the fascia. In addition, the cabin’s touchscreen will grow form 10.3 to 12.3 inches.

We’re flying down the Fuchsröhre (the fast section leading to Adenauer Forst) at a speed which I, fortunately, cannot see, because even the cabin of this pre-production prototype wears camouflage. The fact that we haven’t left the ground and ended up hanging from one of the huge trees that lines this section of the track seems like a miracle to me.

Weidinger is not only a chassis developer and extremely likable guy, but has also been a racing driver for ages, including in the VLN, the ADAC GT Masters, and in assorted hill climbs. He knows clearly knows his stuff as he throws the 16.3-foot, 4,400-pound sedan like a virtuoso. The M5 does all the crazy things I expect without complaint, and yet it feels incredibly stable and poised.

It also shows excellent all-wheel balance – the M xDrive system has a rear-drive bias, but it feels trustworthy at the limit. As with the current car, the 4WD mode inspires confidence even with the stability control switched off. Just to demonstrate what a fraction of customers will do in real life, though, Weidinger switched to two-wheel drive before the next bend, and fired the big sedan sideways across the next bend. Um, sure. Why not? The M5 feels a bit like a tank, but one that can pirouette and somersault.

The thrust from the twin-turbocharged 4.4-liter V8 remains completely barbaric, especially on the track. The updated M5 feels every bit as potent as it was last year, with BMW confirming there'd be 600 horsepower in the standard M5 and 625 for the Competition model. Weidinger turns the tap on a few more times, and before I know it, we’re back at Döttinger Höhe. My stomach wanders a little as we start our slow-down lap and photo run, but it’s a chance to catch up with Weidinger about BMW’s optimizations on the car.

Catching Up On Comfort

Weidinger tells me that a total of about 15 people are involved with the M5’s chassis development. Surprisingly, the Nurburgring plays a relatively small role in this M5’s development – it only completes about 50 laps on the legendary track during the facelift. The rest of the chassis development is on country roads and the famed autobahn.

If you’ve ever wanted to know how a vehicle’s technical evolution looks in a real life model family, the M5 and M8 are prime examples. The two vehicles have a substantial amount in common, but because the M8 came after the M5, Weidinger and his team were able to draw on press and customer feedback to incorporate improvements in the updated sedan. One focus area was the adaptive dampers.

"After a few trials, we are now taking over the damper tuning from the M8 Gran Coupe," Weidinger said. "This also requires a re-tuning of the control system for the adaptive dampers. [The hardware] is significantly different. You always have to think about it during the course of a model cycle."

The conflict between comfort and sportiness was the big issue. Many found the M5’s suspension, especially the Competition, a little too aggressive. That gels with our impressions of BMW’s Competition line.

"[M5] has always been sporty and fast, it has always set the lap times in the class, but one point, for example, has always been the rear seat comfort. Or on the motorway. The car is stable, even if you drive 300 kph (186 mph), but can you do it with even better comfort?” Weidinger said. “And if I can make an improvement here without sacrificing performance, then I'll try to take that with me."

But BMW has improved more than the shocks. "The M5 is now also taking over the newer M8's electrical system,” Weidinger confirmed. “So you have to check your systems anyway, and you take the opportunity to work on the all-wheel drive and the variable rear differential and improve."

But the main goal from a suspension designer's point of view was definitely to improve ride comfort. With at least the same performance characteristics, of course.

And that's a point you will really recognize while driving. At least that’s what I experienced. After signing my life away and promising profusely to bring the prototype back in one piece, BMW let me have a go on the gloriously curvy roads around the Nürburgring.

Compared to the Weidinger’s wild lap on the Nordschleife, I’m working the M5’s steering like it’s a bingo wheel at a senior center. He still gives me insights anyway. The steering feels a bit more natural and less rubbery (pretty much the only thing I didn't like about the pre-facelift M5). The new M5’s suspension tuning feels more comfortable than before. In Comfort mode (the other driving modes were still taped off), the M5 is smoother, even on rougher roads.

How the M5 Competition in Sport Plus will behave is another question. Nevertheless, I think that in the future it will be better balanced between ride comfort and agility during everyday driving. That would be in the M5’s best interest – after all almost 70 percent of the customers have opted for the stronger, sharper and even tighter Competition.

It remains to be seen how the impending facelift will affect the epic duel between the BMW M5 and Mercedes-AMG E63 (which also happens to be getting a facelift). Both were better matched than at any point in their history, although the M5 might be a tick better on the track. With the under-the-skin changes coming as part of the facelift, the BMW will also gain a little more in everyday life. This in turn will make room for an even more aggressive, more extreme M5 CS, which will probably also be introduced soon.

As for the facelifted M5, look for it to make its big debut on June 17.