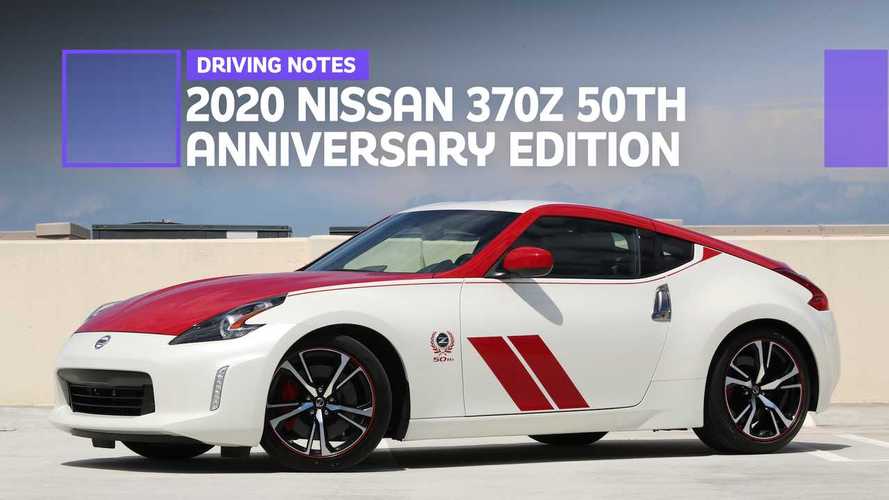 After more than a decade, the Nissan 370Z has run out of charm.

Nissan is making 2020 a bit more of an occasion. By offering 50th Anniversary Editions of its two sports cars, the GT-R and 370Z, the company commemorates 50 years since the debut of the Datsun 240Z. With that, the 50th Anniversary 370Z comes with a custom two-tone paint job, special badging, and a slightly revised interior.

This 370Z's 50th Anniversary package costs $2,600 atop the 370Z’s $30,090 starting price. With options, our test car costs $37,605 with destination fees. But after a week of driving and getting to know this anniversarial 370, we struggle to find the value. While the GT-R’s 50th AE package is fun, well-executed throwback for fans, the 370Z’s option doesn’t achieve the same goal. Unfortunately, Nissan’s once-beloved Z is ready for retirement, and a special edition isn’t enough to remedy the car’s ancient feel.

Even with its special paint job, this is still the same Z that traces back to 2009, and oh boy does it feel like it. In fact, the only aspect of the car that feels relevant is the powertrain. The 370Z packs a 3.7-liter V6 engine, making 332 horsepower and 270 pound-feet of torque, which is still plentiful by modern sports car standards. But paired to a sloppy six-speed manual transmission, the powertrain lacks personality and doesn’t inspire the driver as it should. All things considered, there’s just nothing special about this special edition Nissan.

A two-door sports car powered by a V6 with a manual should be a recipe for success. However, there isn’t much about the Z’s powertrain that puts a smile on our face – except for the noise. Especially at the top of second gear, the naturally-aspirated six-cylinder sounds sweet as can be, begging you to keep it high up in the rev range. With 270 lb-ft of torque, there’s enough low-end grunt to keep the car moving, but the engine comes alive above 4,000 rpm. The happiest I would be in the 370Z 50th AE is blindfolded in the passenger seat; no view of the car, just noise.

But let’s talk about that paint job for a second. Our test car wears the red-and-white color combination and it looks like one of the Pokeballs that Pikachu calls home. Some panels are red, others white; there is no real cohesion to the design and it just looks odd. Even the massive graphics affixed to each door seem out of place. Nissan adds some red touches to the 19-inch wheels and calls them unique, but the wheel itself is not specific to the 50th AE.

The interior tweaks are subtle, to some extent. Various 50th Anniversary logos are placed around the cabin, as a nice reminder of what you’re driving. I’m not wild about these additions, either, but at least there is some fluidity to it. There was an opportunity to do something really special here, just like the GT-R, but Nissan missed the mark.

The Nissan 370Z is 11 years old. In the world of sports cars, that's ancient. And Nissan hasn't made any major changes since the coupe debuted in 2009, outside of some light refreshing and a handful of trims. But it's not all bad.

Take solace in the fact that the Nissan 370Z still has a V6, most of its competitors can’t say the same. Nissan’s naturally aspirated 3.7-liter engine has decent power, pumping out 332 horses and 270 pound-feet of torque. And this one pairs to a slick six-speed manual with a clutch that’s easy to manage, even in traffic. In a straight line, the 370Z can scoot. This particular model gets to 60 miles per hour in about five seconds, while it takes comparable four-cylinder sports cars like the Subaru BRZ, Toyota 86, and Mazda Miata over a second longer (at least).

But that's where the accolades for the 370Z end. We'd take the BRZ, 86, or Miata in the corners any day over the heavy, unrefined Nissan. While the steering is… okay, the 370Z is sloppy on the twisty stuff and provides little to no real feedback. Dynamically, it fails to meet the expectations of a sports car in this segment.

The 370Zs outdated interior doesn't do it any favors, either. The analog instrument cluster with its orange text reeks of the late 2000s, there are tons of hard plastics, too many buttons, and design details that feel dated. If this model had the tiny 7.0-inch touchscreen tested in previous models, we’d criticize that, too. But our 50th AE tester has a cubby in its place instead. Even with a V6, there aren’t many reasons to consider the 370Z over its alternatives.

The Nissan 370Z’s recipe is definitely old school: a rear-wheel-drive two-seater, available with either a hardtop or a foldable canvas top (not anymore after 2019), and an optional manual transmission. It’s simple, it’s elegant, and makes the hearts of automotive fanatics beat a little bit faster. It hardly gets any better than that for the common folk. To put a cherry on top Nissan equipped it with a V6 engine, one that definitely knows how to play the part. With an output of 332 horsepower and 270 pound-feet of torque this 3.6-liter engine is one of the 370Z’s best assets.

But really, it’s the idea of the car itself, which goes 50 years back to the Datsun 240Z, that resonates most. Eleven years ago, the Nissan 370Z was a competitive sports car. These days, blatant neglect makes it feel outdated and just plain inadequate. To make things worse, the 370Z had the misfortune of growing old during a decade of unprecedented and vertiginous technological advance, all of which never made it to the poor Z-Car.

There is nothing inherently wrong with the 370Z, although its lack of a proper infotainment system seem like an aberration in the year 2020. Its real problem is that its competitors are faster, handle better, have better quality, are safer, and more technologically advanced, simply put, it competes with modern cars. You could say it is the Ford Crown Victoria of the sports cars, but unlike the Crown Victoria the 370Z is not a fleet car, and at least in its 20 year run the old Crown Vic was the subject of a few significant updates.