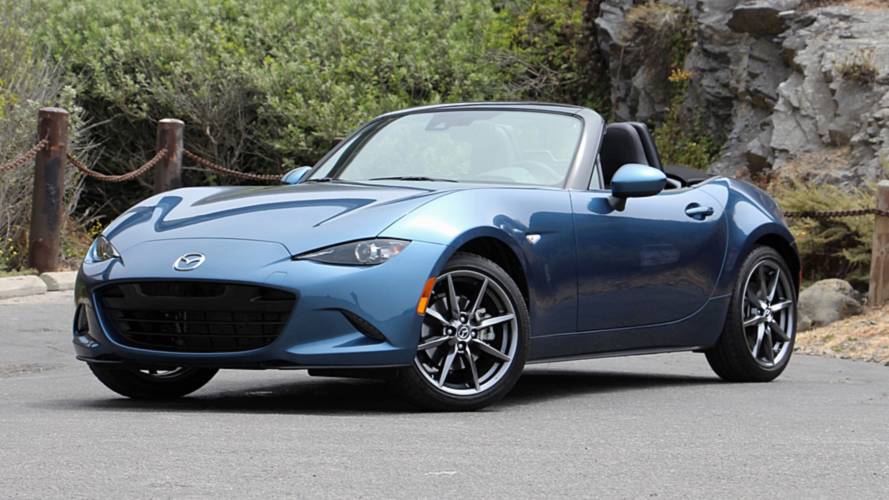 The new Miata has 26 more reasons to love it.

When the first Mazda MX-5 Miata was built in 1989, it focused on being light and fun to drive. Fast forward 30 years, and though the Miata has grown a bit – its wheelbase is 1.7 inches longer than the original NA – it still hasn’t ditched the same two ideals that made it a success in the first place. It’s still a lightweight, and by all accounts, a total riot to drive. But now it’s even more powerful.

"Miata" Is Always The Answer:

On a stretch of roads encompassing nearly 300 miles between San Luis Obispo and San Francisco, California, the updated ND Miata proved that more power means more fun. For 2019, the Miata produces 181 horsepower and 151 pound-feet of torque. If that sounds like a significant amount of grunt in such a small car – it is.

The new model returns a hefty 17-percent increase in power over the outgoing model. But with all that added oomph, the Miata is better than it’s ever been. It’s still perfectly balanced and extremely tossable, and with the roof down, the perfect vehicle to cruise along California’s coast, as I found out.

Embracing Slo Cal's laid-back culture, my ride for day one was a Grand Touring-S soft top. Visually, it seemed like the most-appropriate trim for puttering along 150 miles of California's central coast. The beautiful Eternal Blue Mica finish was a perfect accent to the hues of the surrounding oceanside, and a fresh departure from the obvious Soul Red. It looked especially pretty riding on a set of 16-inch gunmetal wheels.

But I hadn't flown 3,000 miles to see the Miata's barely refreshed exterior.

Hiding under the hood for 2019 is a reworked 2.0-liter SkyActiv engine. Bigger intake valves, a wider throttle body, and the addition of a lightweight dual-mass flywheel up the power output to 181 horsepower and 151 pound-feet of torque as mentioned. That's a solid bump from the outgoing, 155-horsepower ND – and those 26 extra horses make a helluva difference.

The Miata now feels hot hatchback-ish in nature (minus the cargo room). It pulls uncharacteristically in first gear, bouncing off the redline at 7,500 RPM. It produces gobs of power all way up through third, and in certain situations, into fourth without necessitating a downshift. You definitely wouldn't be able to do that in the previous ND.

But even with extra power, the 2,400-pound Miata still relies on its lightweight laurels above all else. It’s just seven pounds heavier than the outgoing ND. The suspension and steering are predictive; the Miata does exactly what you want it to do at all times. Just point and squirt.

The Miata does exactly what you want it to do at all times. Just point and squirt.

On tighter, twistier roads along California's coast, the perfectly neutral steering made it easy to toss the MX-5 around. The steering felt quick even at 30 miles per hour, and even with a slight seven-pound weight gain, the rear-wheel-drive, front-engined setup maintains a perfect 50/50 weight balance. It’s grin-inducing at any speed.

Corner carving completed and a lunch consumed, it was just an hour to our hotel spot in Monterey. While a good part of my morning consisted of vigorously testing the new Miata's dynamics, I laid back in the afternoon and enjoyed its surprisingly comfortable features instead.

The leather-trimmed seats supported my tush for nearly eight hours on road, the new telescoping steering wheel (standard and welcomed throughout the range) offered an improved driving position, and even with the sportier “S” suspension, the Miata never felt too harsh. There wasn't a ton of passenger legroom, but it was enough for my six-foot frame.

As a driver-focused car, the Miata is still low on tech. It doesn't have Apple CarPlay or Android Auto, and the 7.0-inch touchscreen infotainment setup is fussy. The optional i-ActiveSense safety package (which includes lane departure and blind-spot monitoring) is a nice addition, but I doubt it will be a huge selling point given its basic functionality.

A fully loaded RF Club with the Brembo/BBS/Recaro package would be my plaything on a near-100-mile stretch from Monterey to San Francisco for day two. Even though it looks absolutely stunning with the roof up, I felt forced to electronically drop the top in order to get the full Miata experience.

Finished in a silver paint job with black wheels, the aggressive-looking RF is a dramatic departure visually from the more-subdued GT-S I had the day prior. But it was also unique in the way it performed.

Underhood is the same 2.0-liter SkyActiv engine producing 181 horsepower and 151 pound-feet of torque. But the added rigidity of a metal roof and an extra 113 pounds over the soft top yields a much tighter product (the Miata RF tips the scales at 2,493 pounds).

That extra weight forces the RF to squat aggressively on the upgraded Bilisten rear shocks. And on this particular stretch of road, the stiffer Club suspension enhanced the Miata’s dynamic handling even further. Downhill, in fourth gear, at 70 miles per hour on San Francisco’s Skyline Boulevard, the Miata RF is perfection on four wheels. It dives into corners quickly, slides gracefully on exit, and makes other vehicles in this segment look too tame comparatively.

The six-speed manual transmission clicks into gear, the clutch point engages thoughtlessly and hill start assist (new for 2019) makes is easy to manage in San Francisco traffic. It’s a fantastic gearbox all told – that’s probably why Mazda has one of the highest take rates on manuals. The company cites a near 60-percent preference on manual Miatas over automatics in 2018 already.

Contrary to the GT-S’ faux-lux cabin, day two’s RF featured a set of sporty Recaro seats instead. They were sublime; my worry of feeling restricted was immediately alleviated once I hopped in the driver’s seat. More bolstered than the regular Miata seats, but with a leather and Alcantara mixed trim and plenty of support, the upgraded Recaros were even more comfortable than the set found in the GT-S. Combined with the BBS wheels and Brembo brakes, they are well worth the $4,670 asking price.

Where the RF can be docked slightly is in headroom – it has just 36.8 inches compared to the 37.4 inches in the soft top Miata. At six-feet, my head was uncomfortably close to the roofline. It’s to be expected, but I can’t imagine anyone taller would be comfortable without the roof stowed.

And then there’s the price; you can’t get an RF for less than $32,345 – Mazda only offers Club and Grand Sport trims of the hardtop. With the Brembo/BBS/Recaro package, our tester rang in close to $38,000. It’s not exactly the definition of an affordable sports car considering the more-powerful, equally-expensive competitors (Honda Civic Type R, Ford Focus RS), but it’s so good you might be willing to dish out nearly $40K for a Miata.

Our endpoint was the Golden Gate Bridge. Two days and more than 300 miles behind the wheel of a Miata was tiring, but it solidified its position as the ultimate affordable driver’s car – again. Even with more power and a bigger price tag, it hasn’t lost its charm. Just remember, you don’t even need to go all out on a fully loaded RF with the Brembo/BBS/Recaro package to enjoy the Miata for what it is. The MX-5 is still fun to drive out of the box, and with more power, it’s possibly the best Miata to date.