Scraping is to off-roading as rubbing is to racing. At least that’s what I tell myself as the underside of the 2020 Jeep Wrangler Unlimited Rubicon EcoDiesel grates against the red sandstone of Utah’s Sand Mountain off-highway vehicle recreation area. 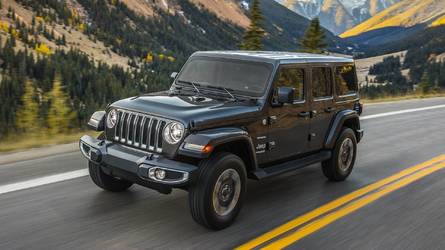 The clash of metal and sedimentary rock fails to deter the Jeep, though, and the Wrangler continues its ascent up the craggy topography with the persistence of a mountain goat in search of higher ground. Albeit, a mountain goat that occasionally scrapes its belly on large protrusions.

Credit the Wrangler EcoDiesel’s namesake powertrain for some of its tenacity. With 442 pound-feet of torque available at just 1,400 rpm, the 260-horsepower turbodiesel 3.0-liter V6 works with the Rubicon’s trim-specific four-wheel-drive system with its 4.0:1 low-range ratio (lesser Wranglers use a system with a 2.72:1 ratio) and knobby BFGoodrich T/A KO2 rubber to overcome the area’s many obstacles that threaten to damage the SUV.

Fortunately, Jeep equips the Wrangler EcoDiesel with underbody skid plates to protect its most vulnerable areas, including its powertrain-specific 18.3-gallon fuel tank (all other Wranglers use either a 17.5- or 21.5-gallon setup) and 5.1-gallon diesel exhaust fluid (DEF) tank. The latter tank’s generous capacity allows the EcoDiesel to travel up to 10,000 miles between DEF refills.

Despite it not affecting the Wrangler Unlimited Rubicon’s 37.0-degree departure angle (36.1 degrees for all other Wrangler Unlimited trims), the rear-mounted DEF tank’s skid plate still manages to regularly kiss the clay-colored surface of Sand Mountain. Its frequent skirmishes with the ground below are strictly auditory, and the addition of the DEF tank does nothing to diminish the EcoDiesel’s off-road performance.

The same applies to the Jeep’s various other underbody sounds, which do far more damage to my psyche and eardrums than to the SUV itself. In fact, the Wrangler Unlimited Rubicon EcoDiesel leaves Sand Mountain without a single scratch on any of its Sting Gray body panels or black plastic cladding.

On the beaten path, however, the Wrangler Unlimited reigns supreme. Its longer wheelbase improves the SUV’s ride quality. And with more space between its wheel centers, the four-door Jeep lacks the bouncy ride of the two-door model and requires fewer steering corrections to stay straight.

Still, don’t confuse the Wrangler Unlimited for anything but the off-road-oriented, body-on-frame SUV that it is. Even in the more tarmac-friendly Sahara trim, the Wrangler Unlimited EcoDiesel rolls precipitously at low-speed on the smooth roads that snake along the canyons of Zion National Park. Although the EcoDiesel swaps the gas model’s 15.6:1 steering ratio for a 14.3:1 gear, the model’s steering suffers from the same large on-center dead spot and poor weighting of other Wranglers. A corner carver, the Wrangler EcoDiesel is not.

The Jeep feels unburdened by the more than 300 pounds the diesel powertrain adds to its curb weight.

Even so, the Jeep feels unburdened by the more than 300 pounds the diesel powertrain adds to its curb weight. Outside of Zion, the turbocharged six-cylinder engine proves a willing partner on Utah’s State Route 9. Turbo lag is minimal, and the engine’s plentiful low-end muscle – the diesel betters the torque of the Wrangler’s four- and six-cylinder gas engines by 147 and 182 pound-feet, respectively – makes passing slower moving traffic as simple as reading a children’s picture book.

Helping the Wrangler EcoDiesel reliably put the engine’s grunt to the ground is a responsive, diesel-specific eight-speed automatic transmission and heavy-duty Dana 44 solid front and rear axles. Whereas Jeep restricts the higher-spec axles to gas-powered Wrangler Rubicons, the brand fits the units to all diesel models.

Show Me The Money

In spite of the EcoDiesel’s merits, it’s difficult to find value in the model. The $6,000 powertrain option ($4,000 for the engine, $2,000 for the transmission) fails to improve upon the 3,500-pound towing capacity of the gas Wrangler, while the only visual difference between the EcoDiesel and other Wranglers is a small badge at the rear of the vehicle.

Of course, the EcoDiesel may earn its worth at the pump. Although it’s yet to receive official fuel economy ratings from the Environmental Protection Agency (EPA), the Wrangler Unlimited Sahara EcoDiesel I pilot shows a figure of approximately 30 miles per gallon on its digital gauge cluster display following miles of mostly highway driving. That’s seven to eight mpg better than the EPA highway figures for a Wrangler Unlimited with a six-speed manual transmission (V6-only, 23 mpg) or automatic transmission (both V6 and four-cylinder engines, 22 mpg).

The EcoDiesel’s fuel economy might better its gas siblings’, but – at 30 mpg – to recoup the expense of the model's $4,000 engine at today’s fuel prices requires driving an average of 12,000 miles per year for approximately 20 years. (The $6,000 difference between the more fuel-efficient manual Wrangler Unlimited and the EcoDiesel takes more than 40 years to recover.) Opt to drive off-road and you’re likely to end up scraping rocks. Opt for the torque-rich but expensive Wrangler Unlimited EcoDiesel and you’re likely to end up scraping pennies.