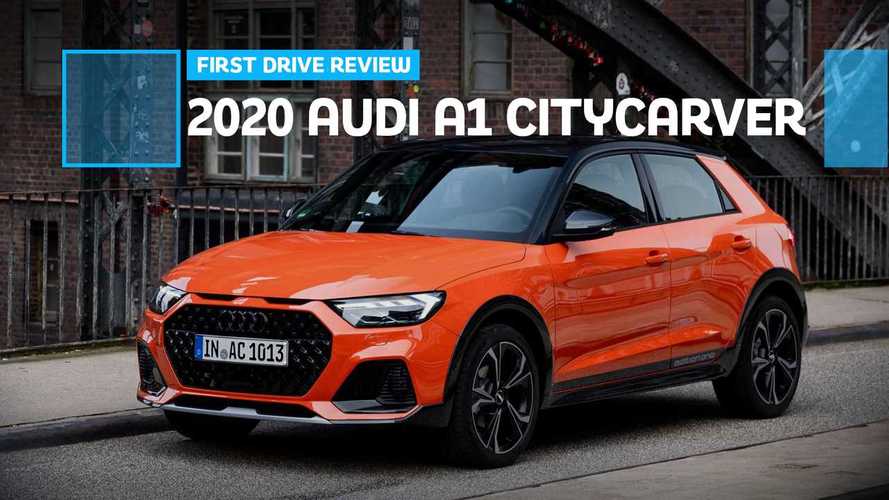 Editor's Note: Motor1.com's German Edition got some time in the new Audi A1 Citycarver, a vehicle that doesn't really have an analog in the U.S. market. This high-riding city car splits the difference between the minicar and the crossover. Check out the full first drive.

We were warned that this would not be a normal driving experience. We would test the new Audi A1 Citycarver in Hamburg, Germany and get to know some start-up companies that would provide additional context to the high-riding sub-compact hatch.

Since I'm sure you don't want to read about the designers of a literal shoe box (versus this figurative one) or how to record a piece of music in a recording studio, I'll limit myself to the driving impressions.

What kind of car is the Audi A1 Citycarver?

It’s basically a normal A1 Sportback with a two-inch lift and a bit of SUV tinsel. There are black wheel arch protections, an octagonal egg-crate grille that matches Audi’s SUVs (the cars have hexagonal grilles) and a neat blacked-out badge.

There’s additional equipment that increases the price by 1,800 Euro ($2,000 at today’s rates) compared to the Sportback, and a range of engine options. A turbocharged 1.0-liter, available with either 95 or 116 horsepower will arrive shortly after the A1 Citycarver’s November launch, as will a turbocharged 1.5-liter with 150 hp. Don’t count on the 200-hp 2.0-liter engine, though. As for our tester, it carried the 1.0-liter engine paired to a dual-clutch transmission. A manual gearbox will follow.

Even without driving the normal A1, I dare to say I like the Sportback. The ride is a little bit on the hard side, but without being a bother. According to Audi spokesman Sascha Höppner, the Citycarver is not softer (although it could be if the car is higher). Only its tires and wheels could make a difference, but no more than when choosing a different wheel/tire package for the normal A1.

The 116-hp three-cylinder of the 30 TFSI is as good as in the other models of the Volkswagen Group. I often noticed that I like it even better than the bigger 1.5-liter with 150 horsepower. The engine’s throttle reacts quickly to inputs, although it sounds a bit rough in the upper rev range. As a three-cylinder fan, though, I like that – it gives the A1 a sporty touch.

The dual-clutch gearbox always takes a little time to react, though. Maybe I'm too impatient for automatic transmissions in general. In any case, even in dense city traffic, the manual transmission is preferable, because I can drive off with without having to wait until the car has sorted out the gears.

The simple answer is that the Citycarver is as versatile as the normal Sportback – the available space is excellent. The boot also offers a lot of space, 12.5 cubic feet isn’t much less than in the outgoing Golf, which offers 13.4 cubes. A shelf in the back provides a flat surface, but it’s removable to accommodate taller items.

What else is there to say?

The A1 Citycarver scores points for its large and brilliant 10.3-inch instrument cluster, running the latest version of Audi Virtual Cockpit. The main infotainment display is always a pleasure and we can’t heap enough praise on the great Google Earth map image. It's also good that Audi installed not only a normal USB input in the center console, but also a modern USB-C input.

Like the new Golf, the Audi A1 also Amazon Alexa integration. The virtual assistant not only answers questions, but also lets you operate smart-home devices – in case you forgot to turn off the lights, for example.

For a brand in which lighting design plays such an important role, two points are remarkable about the Citycarver:

Raising the car ensures a higher seating position, which will be especially pleasant for the urban buyers Audi is targeting. The downside is that the A1 Citycarver has higher carbon-dioxide emissions – the 30 TFSI with the DSG emits 109 grams per kilometer in the low-riding Sportback and 118 grams in the Citycarver, a difference of around eight percent.

The Citycarver’s prices is also a disadvantage. The normal Audi A1 is (if you compare the base prices) the most expensive small car on the market – for example, it’s far more expensive than the truly not cheap Mini three-door. The Citycarver adds 1,800 euro, coming up to 22,100 euro ($24,550 at today’s rates) before optional extras.

The Audi A1 was the dream car of a friend of mine, but only until they looked at the prices. 25,000 euros for a lightly equipped small car, is too much. That friend now drives a Ford Fiesta with a similar 100-hp, turbocharged three-cylinder petrol engine, which they paid about 15,000 Euro ($16,660) for. That said, the Audi’s excellent interior tech, stylish look, and adequate space make it a fine car for people willing to pay.