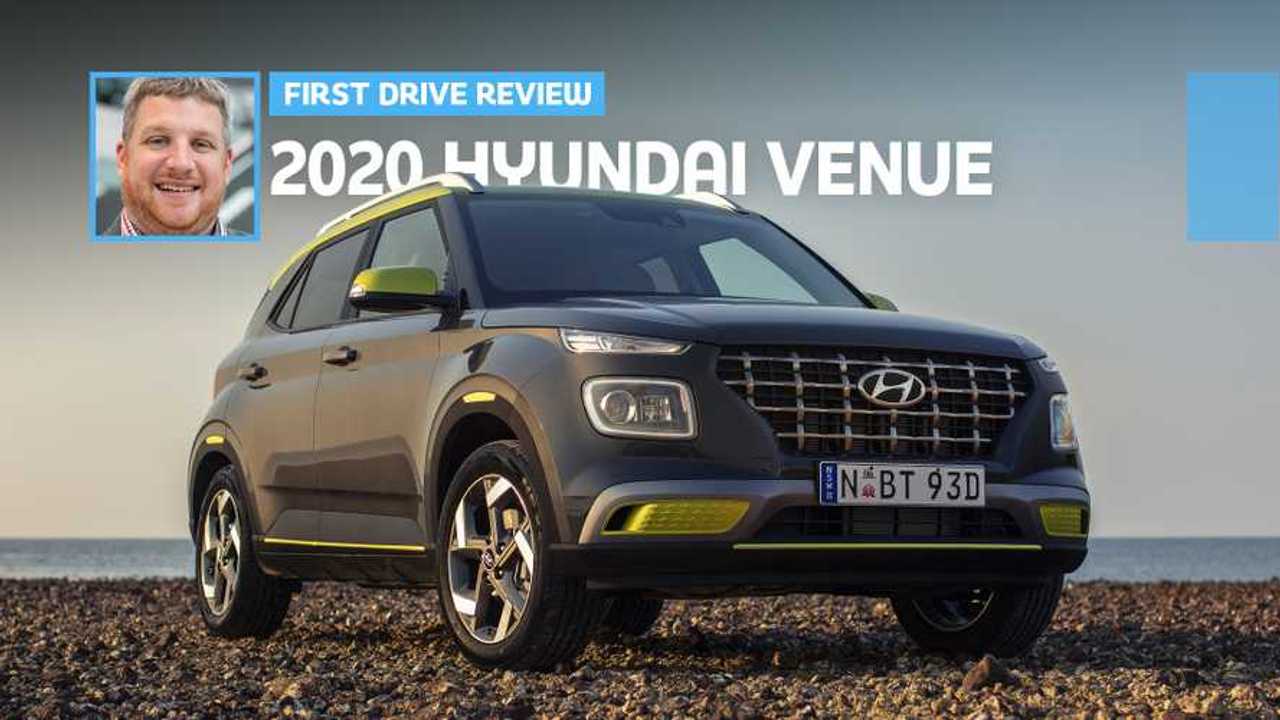 Would you rather have a new car or a used one? It's one of those simple questions that yields wildly varying answers. Hyundai is gambling, though, that most folks will opt for a new vehicle (with its attendant 10-year powertrain warranty) if the price is approachable, the style is eye catching, and the character filled to the brim with charm.

Moving To A New Venue:

The 2020 Hyundai Venue has all of those things in spades. Or at least I think it will. After driving an Australian-spec car outside of Brisbane and along the stunning Sunshine Coast, there are still plenty of questions about this subcompact crossover SUV. One thing to be sure of, though, is that it's a smart, stylish package that should easily attract entry-level, new-vehicle customers to the Hyundai brand.

The “Australian-spec” bit is, obviously, important to this review, and not just because the steering wheel was on the wrong side of the cars I drove. Mechanically, the cars in question had a number of differences from what American consumers will get.

Instead of a six-speed automatic, U.S. customers get an available continuously variable transmission (or an Intelligent Variable Transmission, as Hyundai calls it) or a standard six-speed manual. The CVT is coming to America because it offers better fuel economy than the automatic the rest of the world is getting, although I suspect the fact that the Venue's platform mate, the Hyundai Accent, has the same belt-driven trans made a degree of sense from a manufacturing and servicing standpoint.

U.S.-market cars will also feature softer dampers, although the springs and sway bars are identical across borders. And finally, the Aussie-spec cars wore Nexen summer tires – all-season rubber, better suited to the varied climates in the United States, will be the only choice when the Venue arrives later this year. There are also the more obvious market-to-market changes. The trims won't directly translate – the U.S. gets Venue SE and SEL models, as opposed to the Active and Elite featured here – and international customers will enjoy a far broader spectrum of exterior/interior color combinations.

All of this is a roundabout way of saying that the U.S.-market Venue will likely feel very different in a few key ways from the Australian-market model.

One thing that won't change is the Venue's styling. This is an extremely handsome little crossover from every angle. Taking some of the latest Hyundai design hallmarks from the Palisade and Kona and applying them to a car with such a short wheelbase yields a chonker of a car. There's a Tonka-like air of exaggerated toughness to the Venue's exterior, and much like the original Kia Soul, I can see this design forcing consumers to rethink their opinion of the Hyundai brand. It's that good.

Hyundai clearly knew exterior character would play a major role in attracting customers to such a small product, so aside from the handsome sheet metal, designers went bananas with colors. In foreign markets, Hyundai will offer up to 80 individual combinations of body color, roof color, and interior color. Despite my protestations to Hyundai's U.S. representatives on hand in Australia, our market won't see quite so many combos.

Hyundai will offer up to 80 individual combinations of body color, roof color, and interior color, just not in the U.S.

The biggest casualty is the two-tone roof and mirror caps. Available in black, white, or Acid Yellow on a number of trims in foreign markets, Hyundai will limit U.S. consumers to a white roof, and only with the Denim Edition package's blue body paint. And in the cabin, the Denim Edition is the only way to get interior plastics with a blue finish. Otherwise, consumers are stuck with monotone Venues with black or gray cabins. Our Venue will also feature slightly different taillight signatures.

Those cabins, though, are fine places to while away miles. Plastic is the predominant material, which is also true of all the Venue's competitors. But the Hyundai stands out with nice bits of trim here and there – we dig the splashes of color in the Aussie model’s cabin – although the door plastics were too firm and the dashboard material didn't feel as solid as I'd like. Again, though, the design looks good, and for the segment, nothing felt too flimsy.

There's not a huge amount of standard equipment in the cabin, but Hyundai bests the Venue's most obvious rival, the Nissan Kicks, with a standard 8.0-inch touchscreen infotainment system with Apple CarPlay and Android Auto compatibility The Kicks gets by with just a 7.0-inch display that lacks Apple CarPlay or Android Auto as standard on all trims. That's a significant inclusion, as is a standard automatic emergency braking (AEB) system that includes pedestrian detection, which Nissan's AEB system also can't match – the Kicks has standard auto braking, but it lacks pedestrian detection.

The Venue’s cabin is also a reasonably roomy, comfortable place. Assessing space in the front seats is difficult on right-hand-drive models – it's a bit like trying to dance with your shoes on the wrong feet. That said, the chairs themselves were, for the class, remarkably comfortable and supportive. The seating position is excellent too, and that big windscreen means forward visibility is on par with the Fiat 500L (the only thing about that particular car that I can heap unadulterated praise on).

The second row is less praiseworthy. Put the front chairs back as far as possible (and they go back far – customers north of six feet shouldn't shy away from the Venue) and second-row legroom essentially vanishes. With the driver's seat set up for a five-foot, seven-inch colleague, though, I could sit in the second-row bench with reasonable comfort. There's no harm in putting four average-sized adults in the Venue for short-to-medium journeys.

Quiet… Most Of The time

If you do load the Venue up with people, all four passengers will enjoy a quiet ride. Along Australia’s motorways and two-lanes, the subcompact Hyundai crossover’s cabin let in little road noise. In fact, it was only at highway speeds that wind noise crept in. Even then, it's limited to the area around the A-pillars. Overall, the Venue may boast the quietest ride in its class.

Overall, the Venue may boast the quietest ride in its class.

The Venue's comfort extends to how it behaves on the road. Something like half of Australia's roads are unpaved, and they made up a fair portion of my day with the car. On the dirt, the Venue's MacPherson-strut front and torsion-beam rear suspension coped easily. On paved roads, it's even better, exhibiting level, composed behavior that nicely isolates occupants from the worst surfaces and imperfections. Considering Hyundai will soften the Venue's dampers even further for service in the U.S., the sub-compact should happily manage the worst our crumbling infrastructure can throw at it.

Considering the firmer dampers and summer rubber, judging the Venue’s handling is a tougher task. The Hyundai handles like the subcompact CUV it is, though. It rolls freely when presented with a turn and exhibits ample amounts of dive under hard braking. Its motions on the twisting roads outside Brisbane didn't feel sloppy, though. There's a small car's amusement in throwing the Venue into bends, too, with nicely weighted steering that offers adequate (again, for the segment) levels of feedback.

The main issue with the Venue is a worrying one. The naturally aspirated 1.6-liter four-cylinder engine coming to our shores packs just 121 horsepower and 113 pound-feet of torque. That is not a great deal of power, even for a 2,700-pound crossover. The Venue routinely struggled with hills, the gas engine wailing away as the six-speed auto rightly held its gear to keep the little four-cylinder in the meaty part of the ultra-lean torque curve. The engine felt better on level ground, though, and there's still enough low-end shove at freeway speeds to execute passes with only modest throttle inputs and a bit of strategizing.

I spent a lot of time revving the hell out of this engine, though. I'm not advocating Hyundai stick its turbocharged 1.6-liter four-cylinder under the Venue's hood (though I did suggest a Venue N to any Hyundai employee that would listen), but another 20 or so horsepower and pound-feet of torque would be a big help.

Extra power wouldn't help the din from the standard engine though. This isn't a nice-sounding powerplant in any other Hyundai product, so no real surprise it sounds like a box fan being fed to a woodchipper here. The addition of a CVT – particularly from a company whose CVTs my colleagues have already taken issue with – makes me doubly worried about the engine noise. And I wouldn't be a Michigander if I didn't point out that the Venue's lack of available all-wheel drive – which it has in common with the Kicks – could be a real shortcoming for some.

Getting Into The Venue

Those worries are minor in the grand scheme. This early taste of the Venue proves it's a subcompact crossover SUV worth being excited about. Its handsome styling and overall comfort should resonate with consumers. Ultimately, though, its appeal will come down to price, which Hyundai's representatives steadfastly refused to reveal just yet. It's a virtual certainty that the 2020 Venue will slot in above the $15,195 Accent, but by how much, I can only speculate.

If Hyundai nails the price, the 2020 Venue's style and substance, as well as the automaker's impressive 10-year warranty, should be plenty to convince used-car customers to visit the new-car showroom.