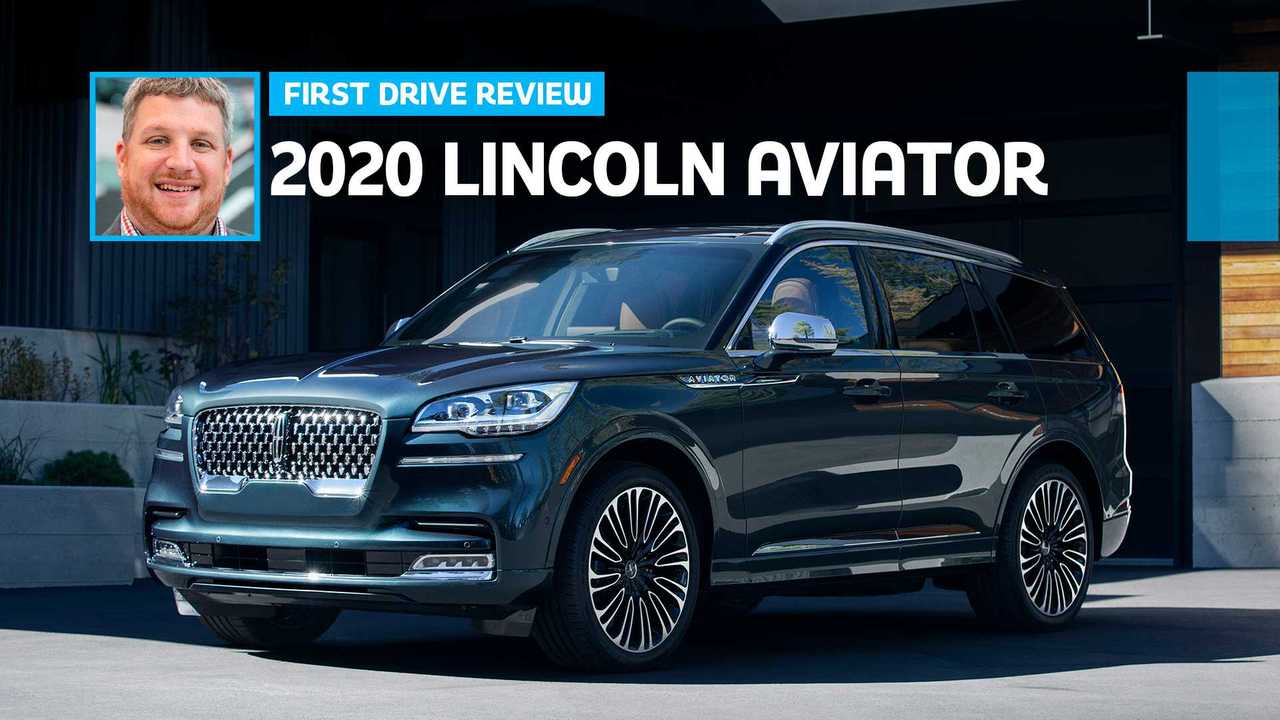 There was a time when Cadillac looked like it might actually challenge the world’s luxury automakers with a distinctly American take on luxury. But while sedans like the CTS and ATS offered a competitive driving experience, the only impressive thing about the in-cabin experience was how far short it fell of Audi, BMW, and Mercedes-Benz.

Had you told us in those early days of Art and Science that Lincoln, not Cadillac, would create a product that drove well and offered an unmistakably American experience in a premium product, we'd have laughed in your face. But here we are with the 2020 Lincoln Aviator, a luxury vehicle so complete that one look at the cabin should be all it takes to sway uncertain customers away from Germany.

Open the big driver’s door using the trick touch-capacitive handle and the sight that follows is better than anything an American automaker has offered in decades. Acres of soft leather, handsome wood, subtle piano-black trim, and small, smart touches of chrome in all the right places highlight the Aviator's cabin. But while any automaker can haphazardly chuck these materials about, the way Lincoln uses them here is unique.

The dash is a rather thin thing, but designers created a sense of depth that makes it feel much more substantial. Leather tops it, but the heart of the dash is a scooped-out bit lined in warm, handsome wood on all but the base Aviator. The passenger side features a small Lincoln badge coach line that looks like an expensive touch. Ahead of all this sits the only iteration of a tablet-style touchscreen your author has ever liked, and beneath it, a sliver of low-key piano-black trim that houses the climate control vents, sandwiched between two strips of leather.

The entire arrangement looks expensive. But more importantly, it looks elaborate and theatrical. And it looks special. Lincoln went out of its way to achieve that with neat little touches, from the dings and chimes on startup (famously created with the help of the Detroit Symphony Orchestra), to the rectangular vents that look like they come straight out of a 1964 Continental. But there's intelligence here, too.

While the 10.1-inch touchscreen houses the vast majority of the Aviator's controls, Lincoln's designers retained physical volume and tuning knobs, and the entirety of the climate control system features analog buttons. They're the only physical controls on the center stack, in a layout that reminds us a little too much of Volvo. That said, with plenty of wood trim, two large cup holders, and a nifty little cubby/catch-all on top of the flying bridge-style center console, the Aviator emphasizes convenience.

There are questionable choices, of course, but they're few and far between. For some reason, designers attached the voice-control button at the 10 o'clock position on the steering wheel spoke. You will hit it accidentally and often. And unlike Mercedes-Benz and BMW, the speaker grilles in the Aviator are plastic instead of metal. That's a real shame, considering the available 28-speaker Revel audio system is quite possibly the best on the market, full stop. In fact, the lack of real metal accents in this cabin is disappointing – $60,000 luxury vehicles demand the real McCoy. But the artful way Lincoln has matched colors and materials in the Aviator's cabin makes these shortcomings easy to ignore. Then again, they're easy problems to fix, too, and plastic speaker grilles aren't the only strange choice.

Take To The Skies

One of the oddest choices is what Lincoln calls the Aviator's drive modes. Instead of Sport, there's Excite. Instead of Eco, we get Conserve. Again, these are theatrical choices. But the default setting? Normal. What about Chill or Relax or Leisure? Any of those are a better fit, while also suiting the Aviator driving experience.

Unlike the previous Lincoln Aviator that ended production in 2005, the reborn 2020 model feels and drives nothing like the Ford Explorer with which it shares a modular rear-drive architecture. Lincoln ditched the Explorer's McPherson strut front/multi-link rear suspension for a short-long-arm setup and paired it with an integral-link rear suspension, but that's only the base setup. The Aviator you want uses a four-corner air suspension and adaptive dampers with a camera that scans the roads up to 500 times per second to account for imperfections between two and eight inches high. While this kind of predictive technology isn't new, it is at such a reasonable price point… relatively speaking. The $3,000 package requires either the range-topping Black Label trim or $11,625 Reserve II package and all-wheel drive – the most affordable Aviator to carry the advanced suspension setup costs $73,565.

The premium setup is worth the cost. Or at least it was in Napa Valley, where we were testing the new Aviator.

The reality is that the roads running through the vineyards are smooth and twisty. That makes the region a great place for testing a vehicle's handling – and is why so many automakers hold media launches there – but it's less good for getting a bearing on how a vehicle rides over imperfect roads. The Aviator's advanced suspension is excellent, but on such roads the only thing that would have surprised is if it'd been anything less. We're eager to get an Aviator on crummier roads (or perhaps even a dirt road) to see if its suspension's early promise exists outside of Wine Country.

What we can confirm is that the Aviator's control of noise, vibration, and harshness is excellent. Lincoln has built a supremely quiet car that defeats wind noise and the gentle thrum of the standard twin-turbocharged 3.0-liter V6.

Your Roots Are Showing

We'll cover the 3.0-liter V6 and its 10-speed automatic in more detail on Thursday morning, where we'll discuss how it fits into the Aviator lineup with the new plug-in gasoline-electric hybrid model. For now, though, we'll say there's plenty to like about the Aviator's 400-horsepower base engine, much as there is in the Explorer ST. But while we can forgive how the V6 engine sounds in more mainstream Ford products, its shrill sound is too present in the Aviator. Run the engine speed up and the Lincoln's Ford roots shine through clearly.

That's also true of the touchscreen infotainment system. It's a lightly reskinned version of Ford's Sync 3 suite, which is… fine? It's responsive and easy to figure out and thank goodness the designers used physical controls for changing the radio station, but in a cabin that feels so special, this infotainment system is like a Blue Oval painted in the middle of a masterpiece. The infotainment setup doesn't shatter the Aviator's luxurious character (the large, landscape-oriented 10.1-inch display is far nicer than anything in a Ford), but it makes a small dent.

This infotainment system is like a Blue Oval painted in the middle of a masterpiece.

Sometimes, though, even the specific Lincoln bits fall short. We never found our perfect position in the 30-way “Perfect Position” seats, despite near-constant fiddling with the multiple adjustments and the power-assisted tilt and telescopic steering column. The 12.3-inch digital instrument cluster is another touch that falls short, lacking the customizability and versatility of even the Explorer's digital cockpit. Audi, Mercedes-Benz, and even BMW's digital clusters are in an entirely different league of usefulness and versatility. For example, there's no way to display the navigation map in the cluster. The cluster isn't even especially easy to learn – during testing, we couldn't figure out how to adjust the left side of the screen, so it just displayed the name of whatever song was on the stereo at the time. That's useful if you're listening to a new artist, but we don't need 100-point font constantly telling us we're listening to “Kodachrome” when Simon and Garfunkel comes on the radio.

The Cost Of Luxury

Prices for the Aviator start at $51,100 for the base model with rear-wheel drive but increase quickly with the $56,190 Reserve trim and quicker still with the Black Label models we drove. You’ll pony up $77,695 to get into the latter model. The gas-only Aviator we drove, though, was even more dear thanks to optional extras, although thankfully, most of the equipment is standard at this point . The sole options are the $3,000 Dynamic Handling Package (air suspension, adaptive dampers, and road-previewing camera system) and the no-cost second-row center console. An as-tested price of $81,790 (including a $1,095 destination charge) is a tough pill to swallow, but the Aviator stands out among crossovers.

The interior will win awards. It's easily better than three-row competitors from Cadillac, Infiniti, and Acura, and is at least a bit better than what you get in the Audi Q7. At the same time, with a standard 400-horsepower V6 engine, this Lincoln packs more punch than the (two-row-only) Mercedes-AMG GLE43 and BMW X5 xDrive40i as well as their larger, three-row, six-cylinder-powered siblings, the GLS450 and X7 xDrive40i while feeling like a better value than any of them. That combination should make the 2020 Lincoln Aviator a compelling choice for luxury shoppers looking for something other than the usual premium three-row.