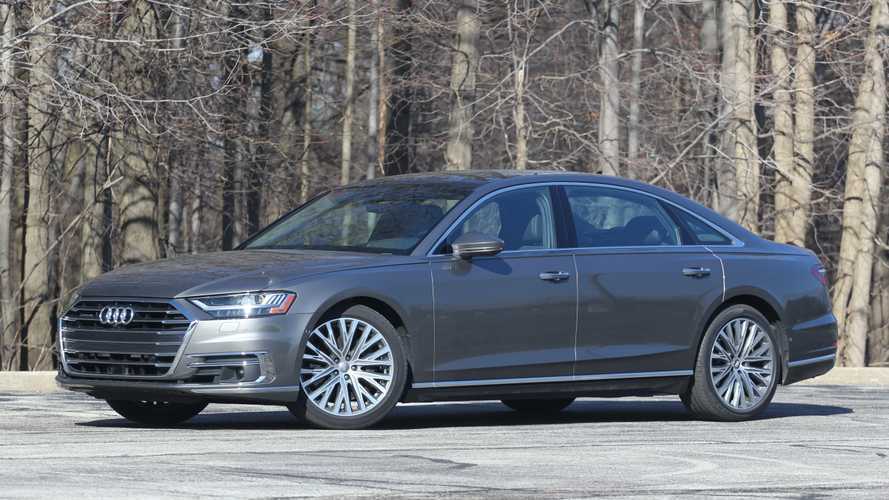 Audi needs to do more to make the A8 competitive.

The automotive industry is cutthroat, and it’s especially bloodthirsty for competitors in the full-size luxury car segment, where vehicles such as the new 2019 Audi A8 compete. These range-topping sedans offer everything a customer could want, and reside in dealer showrooms as an example of the very best design, engineering, and craftsmanship that their brand offers.

The latest A8, though, isn’t quite the steerable superlative it once was. Uninspired looks, an underpowered engine, and its very dear price keep the -est off any adjectives that might be used to describe it.

While a good many features come standard – things such as Audi’s excellent Virtual Cockpit and MMI navigation/infotainment system, safety systems such as low-speed automatic emergency braking, and leather throughout the interior and on seats – a good many more are optional and quite expensive.

My test car’s most expensive option is an upgraded Bang and Olufsan Advanced 3D sound system, which costs $5,900. The next highest is a $4,500 Full Leather package, which replaces the standard leather with nicer Nappa leather and ensures every nook and cranny that wasn’t covered in cowhide before is now. The list of expensive options goes on and includes such high-tech gadgetry as a night vision camera ($2,300) and dynamic all-wheel steering ($1,950), as well as luxurious touches such as massaging seats in all four corners and dual-pane acoustic glass.

Compared to its competitors, the A8’s pricing is right where you’d expect it – up in the stratosphere with fellow German-sourced full-size luxury sedans. The Mercedes-Benz S-Class has the segment’s highest starting price of $91,250, while the BMW 7 Series’ starting price of $83,650 is nearly the same as the A8’s. From there, this Germanic trio is undercut in price by American, Japanese, and Korean competitors that offer greater value but not nearly the same brand cachet.

Audi phoned it in with the exterior design of this fourth-generation A8. The brand has been reinterpreting the same simple design language for so long that its cars have migrated from being handsome to ho-hum. The A8, in particular, is arguably the most underwhelming design in the brand’s lineup today.

Fortunately, the A8’s interior is an entirely different story. Audi has navigated the transition from analog gauges and physical controls to a majority screen-based interface better than any other automaker. The A8 features three large screens: one behind the steering wheel that displays the Virtual Cockpit system and two stacked on top of each other in the center stack.

Virtual Cockpit is a known quantity and is as excellent in the A8 as it is in every other Audi product. The two center screens, though, are the new stars, with incredibly crisp and elegantly designed graphics that complement the high-end physical materials around them. Speaking of which, the A8’s cabin is awash in metal, real wood, and leather that’s befitting its six-figure price tag.

The A8 scores a perfect 10 in the Comfort category because Audi spared no expense pampering the occupants of all four seats. To start, the A8’s adaptive air suspension is incredibly well tuned to flatten out uneven road surfaces. The car glides over bumps and divots; even railroad tracks are more heard than felt.

Inside, though, is where the coddling reaches new heights. For one, there’s no bad seat in the house. The front chairs feature 22-way adjustability, heating, and cooling, along with multiple types of massage. The outboard back seats also have heating, cooling, and massaging, and even recline. In terms of space, everyone has more than enough, with rear seat legroom bordering on comically large. The only interior dimension that’s underwhelming is trunk volume, which at 12.5 cubic feet is on the small side for a full-size car like this.

Lastly, the A8 runs virtually silently, with engine noise barely heard or felt from within the cabin, and wind and road noise very well filtered out. It’s not as silent as an electric car, but it’s darn close.

The A8’s tech and connectivity situation is a mixed bag. On the one hand, this car is a tour de force of technology. On the other, you’ve got to be willing to spend on option package after option package to get every gizmo and gadget that Audi offers. Plus, a few features come with expensive subscription fees that add significantly to the cost of ownership over time.

Let’s talk about what’s good, which is the A8’s long list of cool technology. As mentioned, the car’s three huge interior screens – a 12.3-inch Virtual Cockpit screen and an upper 10.3-inch and lower 8.6-inch screen in the center stack – dominate your field of view. Running Audi’s latest MMI infotainment system, they present gorgeous graphics at an ultra-high resolution. The system never feels slow or trips up. There’s even a nice force-feedback “click” when you touch a button on either center screen that confirms your input was registered by the system. The center stack’s lower screen is used primarily to control the climate system and switches over to a handwriting screen when there’s an opportunity to write something into the system such as an address or search query.

Of course, the A8 features Apple CarPlay and Android Auto, but unlike most infotainment systems that work with smartphones, Audi’s is wireless. In fact, there’s a small compartment in the front center armrest where your smartphone will be wirelessly charged and have its signal amplified by a booster. Just toss it in there and you’re good to go.

Other remarkable tech includes the expensive B&O 3D sound system with tweeters at the base of the A-pillars that pop-up upon start up; a surround-view camera system that not only gives a bird’s eye view of the A8, but also creates a composite 3D view of the car that can be panned around; and a full-color high-resolution head-up display.

In this tester, a Rear Seat Connectivity package for $3,250 also adds special Audi-branded touchscreen tablets mounted to the rear of the front seats. With a built-in rear-seat DVD changer (no Blu-ray, Audi?), people in the back can watch their own movies, listen to their own music, and set their own climate controls. With many of the rear seat controls mounted on the flip-down center armrest, you get all this without sacrificing the middle rear seat; buyers who opt for the even more expensive Executive Rear Seat Comfort package lose that center seat entirely.

There’s more, of course, but these are the highlights that set the A8 apart. Unfortunately, everything just mentioned, besides Apple CarPlay and Android Auto compatibility, is an optional extra, which explains why 30 percent of this tester’s nearly $119K price tag is comprised of options. Also, Audi offers multiple subscription services that are required to make some of this impressive tech work. There’s Audi connect, Audi connect Care, and Audi connect Prime & Plus, all of which are offered with free trials that will, of course, expire, usually after six months. The data connection alone for the car, offered through AT&T, is $20 per month.

Ouch. Unfortunately, the A8 deserves such a low score in this category because Audi tossed away all pretense that you can have fun while driving the A8. For one, there’s only one engine offered: a turbocharged 3.0-liter V6 producing 335 horsepower and 369 pound-feet of torque. This is supplemented by a 48-volt mild hybrid system that takes over running most of the car’s ancillary systems, leaving the engine the sole task of motivation. With a curb weight of 4,751 pounds, it’s gotta focus.

Audi says a V8 engine will be available as an option by the summer of this year, but for now, the V6 is it. It’s not a bad engine; it runs smoothly and the power it provides is sufficient for most situations. Yet, if we’re being honest, paying nearly $120K for a car with 335 hp feels like a bad deal. Audi claims the A8 hits 60 miles per hour in 5.6 seconds, and that feels right, but it doesn’t feel fast from behind the wheel. After all, the BMW 740i takes just 5.1 seconds and the Mercedes-Benz S450 4Matic gets there in 5.4 seconds – and both BMW and Mercedes offer optional V8 engines.

Accelerating from a stop is a particular annoyance with the A8’s drivetrain. Throttle tip-in is far from silky. The transmission, an eight-speed automatic, seems unable to meter out the engine’s power in a linear way if you’re starting from zero. Perhaps it’s the mild hybrid system butting in, or maybe it’s just sub-par transmission tuning, but the A8 can’t accelerate after backing out of a driveway without a clumsy balk.

The Audi A8 offers more safety equipment than we’ve perhaps ever seen in a car. An automaker is usually ahead of the game if it offers, or even makes standard, a full suite of advanced safety technology that includes items such as automatic emergency braking, lane-departure warning and lane-keep assist, blind-spot monitoring, rear cross-traffic alert, and parking sensors.

The A8 includes all that as standard equipment, but goes several steps farther by offering options such as a night vision camera (dubbed Night Vision Assist by Audi), which shows an infrared view of the road ahead that highlights people and animals who could be hard to see at night with the naked eye. We’ve seen similar tech in other luxury sedans too, but it never gets less cool.

We’ve never seen a predictive active suspension before, though, which in the A8 can sense a collision from the side and lift the ride height 3.1 inches in half a second to direct the impact to the strongest part of the vehicle frame. There are other unique, but less extreme safety features too, such as a vehicle exit-assist system that will stop you from opening the car door if a vehicle is approaching from behind. It’d be great if it could see bike messengers, too.

Suffice it to say, the A8 is a cocoon of protection. The only reason it didn’t earn a perfect 10 in this category is because it’s yet to be crash-tested by the National Highway Traffic Safety Administration (NHTSA) or Insurance Institute for Highway Safety (IIHS), but we’d bet our last dollar it aces both. If and when it does, look for this score to change to a 10.

The Audi A8 offers just average fuel economy compared to its competitive set. Its official EPA rating of 19 miles per gallon in the city, 27 on the highway, and 22 combined is virtually the same as the Mercedes S450 and BMW 740i. All three also require premium fuel. The only difference between the A8, though, and the S-Class and 7 Series is that Mercedes and BMW offer plug-in hybrid versions of their full-size luxury sedans for buyers who really care about fuel economy. Audi offers no such option for the A8 (yet), which, as was previously mentioned, is only offered with its turbocharged V6 for now, with a V8 arriving later.