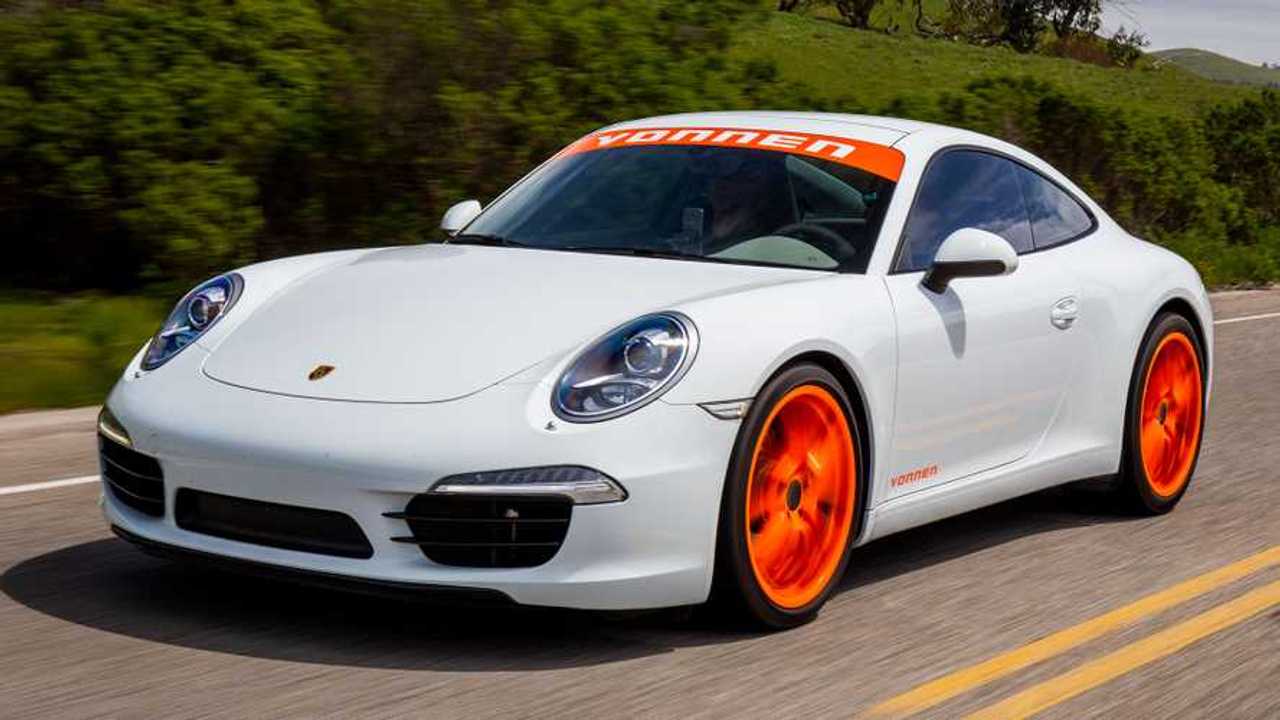 If you want a hybrid 911, there’s an alternative to waiting on Zuffenhausen.

From the outside, this scene is uncannily common: a Porsche 911 in the canyons around Malibu. But this one-of-a-kind Carrera – a last-generation 991 model – is hiding a little wizardry in the form of a massive, electrically-assisted performance boost.

The system is called Vonnen Shadow Drive (VSD), and it adds a considerable 150 horsepower and 150 pound-feet of torque, while only adding 170 pounds of weight. The system itself weighs 210 pounds, but there is some redundancy between the factory parts and the hybrid kit. The Vonnen kit bolts a motor generator to the crankshaft, effectively replacing the flywheel and saving 27 pounds, while another seven pounds disappears by ditching the factory starter. Owners can also downsize the auxiliary battery and go with a one kilowatt-hour unit.

On a glorious spring day along the Pacific Coast, we hop into the 2013 Porsche 911 Carrera that Vonnen used to develop its system. VSD will be available on the 991 first, with the 981-series Cayman and Boxster to follow. The 997 and 996 are next in line, and perhaps where it gets most interesting – and the $75,000 price of Vonnen’s kit is most justified – is on air-cooled Porsches.

As Chuck Moreland, Vonnen’s presidents explains to Motor1.com, there are many Porsche owners that bought cars that were wonderful in their day, but feel slow compared to today’s standards.

“You look at the air-cooled cars, the 1970s and 1980s 911s, they were fast when they came out; they’re not fast anymore,” Moreland said. “Even the ones that are built up, by and large, are not fast by today’s standards. They’re incredible cars to drive, they’re engaging, they’re fun, nimble, you’ve got all that visceral driving experience, and the sound and the rawness, and that’s what people love.”

“But they also want them to be powerful, so that’s what we’re trying to do. Deliver all the modern performance, but not destroy that classic experience,” Moreland said. “That’s why they want the car, they don’t want to go buy a new car. They want the car they have because you can’t duplicate that off the showroom floor.”

Moreland says it’s also important that the character, heritage, and handling owners love remains. Shadow Drive delivers in two ways. First, owners can completely disable VSD when they want to return the car to near-stock form. Second, even when the system is on, it’s working separately – the Porsche ECUs are unaware there’s another power delivery occurring – and with the kit’s relatively light weight, the handling characteristics of the original formula remain true.

And unlike the speed that could be generated from a pair of turbos, VSD’s acceleration is immediate. The system is accessed via an app, which includes an off mode that disables VSD, as well as three driving modes. Street mode, which as Vonnen’s vice president of engineering, Bill Davis, explains, is for when you want a little squirt during normal day-to-day driving. A Track mode – which Vonnen is renaming Sport – can tap into about 60 to 70 percent of the system’s power.

The final mode is Overboost. It’s a little like Tesla’s Ludicrous mode. This mode calls up 100 percent of VSD’s power and torque for when you want a few seconds of all-out boost before the system freezes to recapture energy from the engine and via regenerative braking in order to just cool off. The electric motor has a thermal limit of about 302 degrees Fahrenheit, and requires a little time to cool down if it’s reached its limit. Vonnen says that it’s tweaking this too, and the final version will have 30 percent greater thermal efficiency than the one we’re testing.

The final version of VSD will have 30 percent greater thermal efficiency.

The liquid-cooled battery and its lithium-based chemistry is designed to be thermally stable across a wide range of climate conditions, but, just like in any electrified vehicle, extreme conditions do affect performance. The Vonnen system never powers the car independently. Instead, it acts as an enhancement to the engine, which is always running.

We first drive the 991 with the Vonnen system disabled to get reacquainted with the car and to figure out just how much of an enhancement the VSD provides. In this case, the 2013 991 C2 we’re driving came with a naturally aspirated 3.4-liter flat-six, which pushes out about 350 hp at 7,400 rpm and 287 lb-ft at 5,600 rpm. Power is channeled via Porsche’s dual-clutch automatic transmission (also known as PDK), but Vonnen can fit VSD to cars with a manual gearbox, as well as ones with turbocharged or otherwise modified engines. Even without a turbocharger, the base car is no slouch, hitting 60 miles per hour in about 4.4 seconds. A few short turns up Malibu’s Las Flores Road confirms the steering is endlessly gratifying, but here it’s acceleration we want to gauge.

Logging a bit of time in Porsche’s own Sport mode, we switch the Vonnen system to Street. Everything is controlled via a smartphone app, and in this car we have the phone mounted to the left of the steering wheel. There are four squares that indicated corresponding driving modes and four gauges that reflect the battery charge, battery temperature, the e-motor temperature, and the inverter temperature. Additionally, there’s real-time system power data that the driver can monitor and share.

The movement you’ll want to observe most is the thermally-limited e-motor temperature. The gauge goes down as the temperature increases until it reaches its limit and the system goes into a cooldown period. This can take anywhere from seconds to a minute or two and is required before the driver can access the system’s power again. The longer the driver waits, the longer they’ll be able to exploit the VSD before the next cooldown.

There’s an electrical whir in the cabin while the system is running, and pressing the accelerator increases the sonic drama, which is in addition to the flat-six engine’s note. The car is quicker, but the sensation of speed isn’t dramatically different. In Sport mode, we find ourselves on a few longer stretches where we can tap into more power and reach the thermal limit. When this occurs, you’re automatically running back to stock settings, but the system is available just a short while – maybe 15 seconds – after. We opt to wait a little longer so that we can get a longer burst as we switch to Overboost.

Overboost Mode "turns the dial up to 11."

Davis, who is effectively our co-pilot and is walking me through what the system is doing, says this mode is when you’re really looking to have fun. “It turns the dial up to eleven,” and really, this is what we’re here for. It’s the reason you’d consider fitting VSD on your car. It’s also our first opportunity to fully gauge what the system adds beyond the bragging rights of more power and torque.

We intentionally slow down to create a generous clearing between us and the few cars ahead. We then punch down on the accelerator and the Pirelli P Zeros hook up. Like a yo-yo, we’re flung ahead, the 991 gathering speed rapidly as both the 3.4-liter engine and the electric motor scream. We’re tearing down Old Topanga to where the land ends and the Pacific Ocean crests on to the sand, the small distant shapes ahead of us are quickly enlarging. We downshift twice in succession under hard braking, having just had a moment of clarity. This is the reason this system exists, the theater we’ve just witnessed; performance dialed deceptively further than the badge on the car would indicate.

This is also when we’re told we’ve run out of juice, subsequently requiring a minute before we can take another go. After a few gratifying runs, Davis suggests we switch the system completely off.

“It’s easy to get used to this new performance level, but switching it off reminds you of just how much extra you’re getting,” Davis says. He’s entirely right. With the VSD switched off, the drama is as gone as it can be in a 911. The cabin is quieter, and without the instant torque boost, acceleration seems almost pensive before gathering a moderate bit of momentum.

The Vonnen Shadow Drive serves as a significant performance boost for a wide range of current and past Porsche models, and years before Porsche offers a performance hybrid on the new 911. Vonnen believes some owners of current-generation cars, those that want to keep the car within the family or are attached to their particular car, but feel it’s lacking in power, will opt for the system. But to us it’s clear that the best case for the not-so-small $75,000 price tag is in the air-cooled models. It’s here where the performance boost will be most dramatic, where owners can add a bit of useful modern technology while also keeping the essence of their classic cars. Vonnen is currently taking orders and will begin fitting the first units by summer.