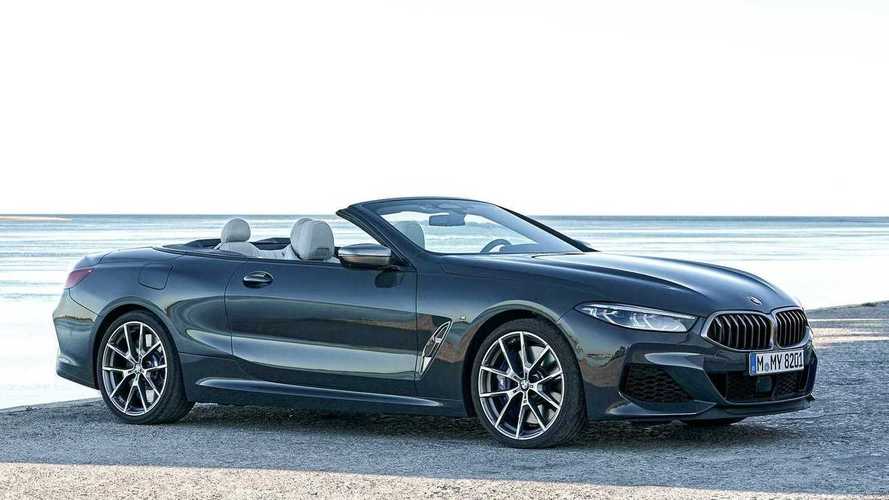 The open-top 8 Series is dynamic and fun to drive, but has a fundamental flaw.

Editor’s Note: Before Motor1.com editors get their hands on the new BMW 8 Series, our partners in Germany recently spent time with the new 8 Series Convertible. Read on for their impressions.

This is the open-top version of the BMW 8 Series. Number two of three, so to speak, because later this year, the most fashionable of all Munich models, a four-door Gran Coupe, will join the lineup. But this one is for fans of opulent fabric roofs; in my mind, people with gold-buttoned jackets and the perfect tan watching sunsets on beach promenades where the cocktail costs $30.

Could A Base Model Be Coming?

BMW Spotted Testing 840i At The Nürburgring

The competitors in the pricey land-yacht segment are the Mercedes-Benz S-Class Cabriolet, Bentley Continental GT Roadster, and Aston Martin DB11 Volante. But the BMW is a lot cheaper than the three mentioned. "Cheap," however, is relative.

Recently we drove the M850i Coupe and noted its dynamic excellence, but it didn't necessarily have the charisma of a $111,000 tourer. The 8 Series Cabrio, meanwhile, has no desire for such discussions – it looks like a luxury vehicle that was born to be topless.

Behind the still somewhat odd-looking (optional) glass gear lever, you'll find a stylish, glossy black button that removes the roof in 15 seconds, and up to speeds of 31 miles per hour. The hood mechanism, added rigidity from the reinforced A-pillars, new tension struts, and two roll bars, increase the weight of the 8 Series Convertible by around 275 pounds. That means the open-top 8 Series is quite chunky; the M850i xDrive tips the scales at 4,607 pounds. Ouch.

This leads us straight to the engines, which, unsurprisingly, aren't any different from those in the 8 Series Coupe. At launch there's a powerful twin-turbo 4.4-liter V8 with 523 horsepower and 553 pound-feet torque. The 840d xDrive, with a three-liter six-cylinder diesel producing 320 hp and 501 lb-ft, promises a more efficient sunburn. Later in the year, the open-top M8 with near 625 hp, and the future entry-level 840i (with a 340 hp six-cylinder engine) will follow. It will also be the only model available with pure rear-wheel drive.

The interior of the 8 Series Convertible doesn't really look any different than the Coupe. Except, of course, instead of steel (or carbon fiber) you now have a multi-layer, acoustic-insulating fabric, or an infinite amount of sky above you. And a foldable, detachable wind deflector above the disturbingly claustrophobic rear bench is standard.

Together with the standard all-wheel-drive system, there's no way around the 8 Series acting as the ski vacation transporter of choice. The height-adjustable neck warmer underneath the headrests and the weekend-suitable 12 cubic feet makes it all the more appealing.

Are There Noticeable Disadvantages When Driving?

Um... no, at least not if you don't have an aversion to sunlight. It's easy to see that the stiffness is on a par with the coupe. Nothing rattles, creaks, or twists. Even if you thunder over a bump in the middle of a closing bend with "slightly" increased speed, this 8 Series Convertible does what a good athlete does: cleans up the situation with stoic sovereignty, unimpressed by the given line.

I deliberately say the open-top, 4,000-pound four-seater with massage chairs is an "athlete." The 8 Series drives winding country roads not only with impressive speed, but it also shows a lot of finesse.

Naturally, this big BMW is no McLaren Roadster or Porsche 911 Cabrio. But in its class, it might be difficult to find anything as capable or as finely balanced as this. The differences in driving dynamics to the Coupe are hardly noticeable. Without any direct comparison, I would say that the Cabrio feels minimally bulkier at the limit, but stays on a very high, pleasant driving level.

The 8 Series drives winding country roads not only with impressive speed, but it also shows a lot of finesse.

As usual, the steering is somewhat rubbery, but smooth, quick, and direct. The front axle is very alert, but the standard rear-wheel steering is not without fault. If you tighten the reins, the car reacts almost too nervously. A click in the Sport or Sport Plus mode increases the steering resistance, among other things, and straightens things up again.

I don't know if it was the rough charm of the southern Portuguese asphalt, but the Bridgestone Potenza S007 ultra-high performance tires (which almost look like semi-slicks) return plenty of feedback to the fingertips. In general, this car tells you exactly where you are at any moment – and I don't mean that every pebble is backbreaking – the opposite, in fact. The 8 Series has excellent damping. There are no nasty surprises, even at high speeds.

The 8 Series Convertible keeps calm and completely stable, even if you throw it into the curve like a hooligan or brake too deep into it. But calm and stable isn't the same as bland. Even the convertible 8 Series doesn't bury its agility with stiffness. With the electromechanical roll compensation on board, this vehicle can move. It feels really playful at speed but still with an immense amount of grip at the limit. While competitors like the AMG S63 Convertible plow through bends, the 8 Series skates through them with more fluidity.

Sounds Pretty Good, But How Is The Engine?

It's good. The latest BMW V8 remains a safe bet, but it's definitely not a show stopper. It doesn't hit the plaster as hard as an AMG eight cylinder, nor is as fine-nerved as a Ferrari twin-turbo, but it gets up to speed at less than 2,000 rpm, hangs incredibly well on the throttle, and unfolds very smoothly. Apart from that, it's as quick as its 523 hp and 553 lb-ft suggest. To 62 miles per hour, the 8 Series Convertible can do it in just 3.9 seconds. That makes it 0.2 seconds slower than the M850i Coupe, but it's not noticeable from behind the wheel.

The latest BMW V8 remains a safe bet, but it's definitely not a show stopper.

Not much else needs to be said about the ZF eight-speed automatic. Especially with BMW tuning, it is, as always, as fast and gentle in all situations as it is a cleverly decisive assistant. Also very nice: without a roof, you notice how good the BMW V8 sounds. In both normal and Sport Plus modes, the loud engine emits a beautiful note.

Are There Any Weaknesses?

Don't worry, there are. The first is interior style, or rather, lack thereof. Ergonomically the 8 Series Convertible is a force. The seating position is excellent and the infotainment operation works like clockwork. And the fact that BMW still leaves its occupants with a choice of standard controls, gesture or touch control, or the now totally functional voice input is a big bonus.

The only problem is that it doesn't really look like a $121,000 vehicle – and definitely not a $150,000 in some trims. I don't quite understand the strategy behind it, because in the new 7 Series is beautifully done with a wonderful atmosphere and more than one "wow" effect. The 8 Series, on the other hand, looks no finer inside than a well-equipped 3 Series, even without a fixed roof. It simply lacks the same attention to detail found on other cars. And the leap in comparison to the old 6 Series is not significant enough.

Okay, I Have A Ton Of Money And Need A Convertible – What Do I Do?

Well, if you're facing such an agonizing problem, I'll try to help. If you're more of the opulent type, who places a lot of emphasis on leather and wood sourced from rare animals and trees, and so much exterior chrome that it forces onlookers to cover their eyes, then the new 8 Series Convertible isn't your car. Anything that has to do with pomp and luxury, an S-Class convertible or an open-top Bentley Continental is probably better.

But the best driving dynamics of all the topless GT cars is undoubtedly the BMW. No other car in this class is as sporty, but at the same time, foolproof and comfortable. The rest is, especially in this segment, primarily a matter of taste.