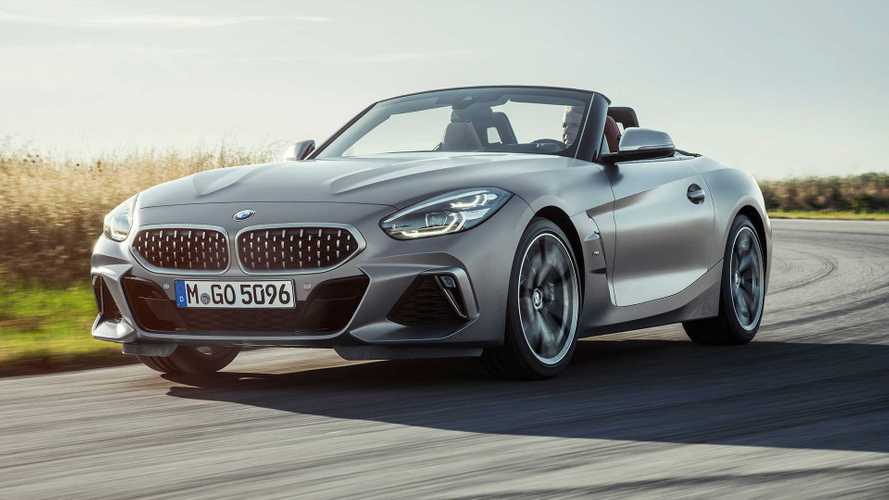 The Z4 returns to its roots without abandoning yesteryear's gains.

No matter how intently you’re spanking an autocross course or chasing superbikes through canyons, rocking a Porsche Boxster, Audi TT, BMW Z4, or the like is usually a recipe for instant judgment. Critics invariably pipe up when it comes to these diminutive roadsters. While BMW’s sub-scale Z cars earned a rep for driver-focused demeanors (think Z1, Z3, Z8), the last-gen Z4 softened up with comfy damping and a folding hardtop, a particularly telling piece of hardware that raised the center of gravity and hindered the performance of the pint-sized platform.

Enter 2018 and BMW’s efforts have shifted to a longer, wider, and meaner Z4 that’s been reworked from scratch to satisfy a particular demographic: the person behind the wheel. Remember the “Ultimate Driving Machine?” Yep, Bayerische Motoren Werke is back on that mission again – though the Z4 only comes with an eight-speed automatic transmission, and no manual gearbox option. Chew on that.

The new Z4 is buzz-worthy for its parallel development with the upcoming Toyota Supra, and the Germans have been milking its release for some time now – my first drive came earlier this year in a camouflaged prototype at BMW’s private proving grounds in Miramas, France. With this iteration, the Z4’s fundamentals have been bolstered with perfect fifty-fifty weight distribution, a wheelbase that’s been trimmed an inch, and tracks that grow nearly four inches up front and just under 2.5 inches at the rear.

While the sDrive30i’s twin-scroll turbocharged four-cylinder gains 15 horsepower, the six-cylinder M40i posts a whopping 47-hp boost over its predecessor. For what it’s worth, U.S.-spec Z4s enjoy a 50-horsepower advantage over their European equivalents because stateside cars avoid the EU’s power-sapping gasoline particulate filter. Helping manage that considerable oomph is a chassis that’s 20 percent stiffer.

Sampling the final, production-spec Z4 at Autódromo do Estoril in Portugal says something about BMW’s intentions. The circuit offers a broad range of tight, technical kinks, medium-speed esses, and a lengthy straight that culminates in a sharp corner. This is not exactly the stuff of fluffy lifestyle roadsters. With drive modes that adjust the suspension damping, the electronic rear differential, throttle response, and power delivery, the Z4 M40i can be configured quite a bit for different dynamic setups. In its most aggressive Sport + mode there’s a more pronounced engine sound, some of which is routed through the speakers. But unlike its synthetically enhanced (but convincing) sonic experience, the Z4’s dynamics are honest and gratifying. Even at a challenging circuit such as Estoril.

While the prototype I tested a few months ago in Southern France felt a tad too accommodating and comfortable in its most aggressive setting, here in Portugal the chassis felt planted and responsive, enabling quite a bit of agility in the tight stuff and stability through higher speed sections. Power from the 382-hp inline-six is Cool-Whip smooth, and the 369 lb-ft torque peak commences at 1,600 rpm and won’t taper off until 4,500 rpm.

The twin-scroll turbo mill is almost smooth to a fault with ultra-linear power delivery and revs that escalate with effective, but undramatic, progression – if there is any time I’ve craved dynamic engine mounts, it’s now. The Z4 dispatches the run to 60 mph in 4.4 seconds, and the eight-speed gearbox copes with the thrust crisply and efficiently. Perhaps most surprising about the Z4’s track performance was the amount of lateral grip it offered while being flung around Estoril’s esses.

Perhaps most surprising about the Z4’s track performance was the amount of lateral grip it offered while being flung around Estoril’s esses.

While lightweight roadsters such as the Mazda MX-5 might get slippy-slidey, the Z4’s beefy 275-mm, 19-inch rubber and wider track made for a solid, stable platform. Coupled with its much-improved chassis, the Z4 belies its cutesy layout and corners like a serious sports car. Don’t let its open-air configuration fool you, this roadster loves to be driven hard.

A subsequent drive on local roads reveals a subdued personality in its more sedate driving modes, and reasonably quiet operation with the roof raised. The fabric roof, available with an optional reflective silver threading that reduces solar heat transfer, can be dropped in 10 seconds at speeds up to 31 mph. Inside, the cabin offers a straightforward, simply outfitted space that stays on point with BMW’s prevailing design themes that favor simplicity and austerity over ornamentation.

Digitization is also a thing, with a large 12.3-inch digital instrument cluster replacing conventional gauges and a 10.3-inch multimedia display front and center on the dashboard. The IP is something of a wasted opportunity. While the graphics change minimally according to the different drive mode settings, the default is a rather uninspiring layout with two kidney-like shapes on either side. The seventh-gen iDrive interface, managed by a central touchscreen, is more successful, utilizing haptic feedback on the iDrive buttons and BMW’s familiar control wheel, which accepts hand-drawn entries in addition to the usual click-ey scroll.

It’s easy to get complacent about the Z4’s sporty side when cruising through traffic on the periphery of bustline Lisbon, but flinging the Z4 along Portugal’s coastal roads brings out its saucy side. The engine sounds refined, but present, in all but the most restrained modes (including Eco Pro), and a whizz through switchback-intensive roads reveals an ease in changing direction that can be attributed to everything from the new chassis, to brake vectoring, and to the subtle-but-effective workings of the rear differential. Lay into it, and the Z4 charges ahead with a strong kick and a reassuring grasp of the road, pouncing through corners with a lively but buttoned-down feel.

Lay into it, and the Z4 charges ahead with a strong kick and a reassuring grasp of the road, pouncing through corners with a lively but buttoned-down feel.

In the end, the new BMW Z4 manages to balance its on-track prowess and on-road sense of focus to a degree that none of its predecessors – at least in a tangible, objective way – have been able to conjure. While its performance and chassis improvements are considerable, one must also consider the intangibles – the vibrations, the steering feedback, the kinematics that connect you to the road.

Though eminently capable, the Z4 also feels like it lacks some of the excitement of earlier, more analog models. As it stands, it represents a vast leap over the prior, hard top Z4, but it does so with a degree of refinement that might leave some roadster enthusiasts wanting a tad more drama. It’s a delicate and fine line, especially in a small roadster market that faces an uphill battle against more commonly chosen and practical automotive body styles. That said, the Z4 ultimately represents a spiritual link to BMW’s past wrapped in advanced hardware that’s ready for the future.