It took 15 years for FCA to perfect its Jeep Wrangler-based pickup truck, inaugurated by the JK-based concept in 2005. Finally, the production 2020 Jeep Gladiator arrives with all its conceptual imperfections ironed out, and on the advanced JL Wrangler’s platform underneath. But don't call it a Wrangler with a bed.

Gladiator, We Salute You: 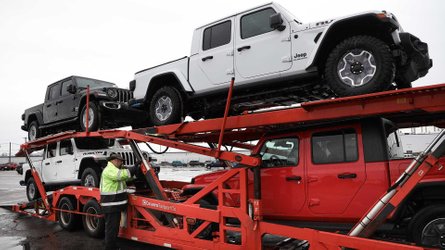 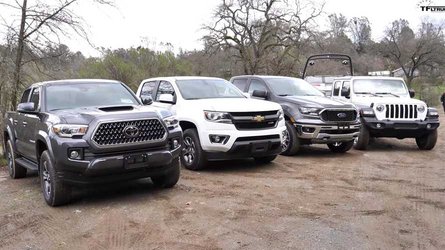 The 2020 Jeep Gladiator is as much a modern mid-sized truck as it is a true Jeep. All of the same capable components of the Wrangler carry over, but now with the versatility and usability of a five-foot bed. The do-it-all Jeep Gladiator makes a compelling case for itself in a segment loaded with strong options like the Toyota Tacoma, Chevy Colorado, GMC Canyon, Honda Ridgeline, and Nissan Frontier.

What can we say about the Gladiator’s look that hasn't already been written about the Wrangler? It's as handsome and sculpted as its SUV sibling up front. Jeep's signature seven-slat carries over, obviously, but it's slightly larger here to help with cooling. The Wrangler's LED headlights, optional steel bumpers, and big ole fenders remain unchanged.

The Gladiator's short-sided five-foot bed screws with the proportions of the otherwise exceptionally shaped Wrangler. It looks stubby, yet extends the Gladiator's length 2.6 feet and its wheelbase 19.4 inches over the four-door Wrangler Unlimited. Sport and Overland trims look especially wonky with the un-Jeep-like extended wheelbase and extra junk in the trunk. At least the Rubicon model looks rugged. But the Gladiator's bed emphasizes utility over looks; its low bed sides sacrifice some capacity, but it means it's one of the few cargo holds in the segment we can easily reach over without a step, although the bumper-mounted steps do make access even easier.

The Gladiator's added length does hamper what little on-road agility its Wrangler bones provide. Steering is vague and body control, even with a class-exclusive five-link coil rear suspension (again, borrowed from the Wrangler), is but a fond memory. Other trucks still rely on less-refined leaf springs. The extra heft makes the already uncouth Wrangler platform feel even bulkier here. At least the Wrangler's rolly-polly qualities improve some in the Gladiator, and the ride, even with a stiffer chassis, is still soft and smooth.

The Wrangler's rolly-polly qualities improve some in the Gladiator.

For now, the Gladiator gets a lone 3.6-liter V6, producing 285 horsepower and returning up to 17 miles per gallon in the city, 22 on the highway, and 19 combined with the eight-speed automatic (16 city, 23 highway, and 19 combined with a six-speed manual). We like the V6 – it’s powerful, able to tow up to 7,650 pounds, haul up to 1,600 pounds (both best in class), and is wholly competent for this truck. But it lacks the same peppy responsiveness you get from modern turbocharged engines.

In our time with the new Wrangler, its optional turbocharged 2.0-liter mild-hybrid engine stood out as powerful and lively. The Gladiator’s Pentastar V6 fails to instill the same excitement. It feels a bit clunky, even if it is more powerful and capable than the turbocharged four-cylinder. A 3.0-liter diesel good for 260 hp and 442 lb-ft is coming, which should add some needed low-end torque to the range, but we probably won’t see it for another few months after launch.

But the Gladiator is still a Jeep, so naturally, its sacrifice of on-road agility makes for impressive off-road skills. Jeep ran every trim, from the base Sport to the range-topping Rubicon, down the Rubicon Trail, earning this truck a Trail Rated badge. Each Gladiator comes with a set of Dana 44 front and rear axles, two-inch monotube Fox shocks, and a part-time two-speed transfer case from the Wrangler.

The Sport and Overland models may carry entry-level off-road equipment, relatively speaking, but the part-time Command-Trac four-wheel-drive system, 2.72:1 low-range ratio, and all-terrain tires are more than you get on most mid-level trucks. The hardcore Rubicon model adds a full-time Rock-Trac four-wheel-drive system with 4.0:1 low-range gearing, electronic locking differentials on both axles, chunkier 33-inch Falken off-road tires that necessitate taller fenders, and an optional forward-facing trail camera.

Each Gladiator comes with a set of Dana 44 front and rear axles and two-inch monotube Fox shocks.

The Gladiator Rubicon snubs its nose at steep, rocky inclines with its 43.8-degree approach angle, which is nearly identical to the Wrangler’s 44.0-degree approach. The front-facing camera (with a built-in washer) is so good, it alleviates the need for a spotter in some cases, and the eight-speed automatic keeps things at a controlled crawl. Every so often, the Gladiator might scrape its ass exiting an aggressive downhill bout, but its 26-degree departure angle is still better than the Toyota Tacoma TRD Pro (24.0 degrees) and Chevy Colorado ZR2 (23.5 degrees).

For more fun, drop the windshield, remove the doors, and pop the top. Even the hardtop Gladiator is a convertible, offering an open-air experience unlike any other midsize truck. The just-as-tough cabin stands up to the elements with its rubber-wrapped touchscreen surround, high-quality leather dash, and metal-plated knobs and switches. In terms of in-car tech, FCA’s baked-in UConnect infotainment with its optional 8.4-inch screen is great. It offers Apple CarPlay, and Android Auto, not to mention there are four USB ports in the cabin: two up front and two in the back seat.

Removing the roof and doors won’t leave your Gladiator susceptible to thievery, either. The back seat hides a small, lockable storage compartment under the rear bench and more lockable storage behind the rear seats. You won’t fit much more than a few wallets and cell phones, but it’s a smart solution to the Gladiator’s open-air characteristics.

The Gladiator Sport starts at $33,545, which makes it one of the priciest trucks in its class. The next-up Sport S starts at $36,755, and the better-equippedOverland comes in at $40,395. The only thing Jeep doesn’t offer is a stripped, sub-$30,000 option like the Ranger, Tacoma, and Colorado. But we can’t complain. Because of its off-road abilities and available tech, even on the lowly Sport model, the Gladiator feels reasonably priced.

Because of its off-road abilities and available tech, even on the lowly Sport model, the Gladiator feels reasonably priced.

The rugged Rubicon model is the most expensive Gladiator, starting at $43,545, or $2,000 more than a base Wrangler Rubicon. Even though it’s pricier than both the Colorado ZR2 ($41,300) and Tacoma TRD Pro ($42,810), the Gladiator Rubicon proves its worth with more style and off-road capability than either.

The Gladiator, through its on-road faults and stumpy styling, is still the most appealing choice in a highly competitive class. Its extra length, strengthened chassis, and added versatility make it far more than just a Wrangler with a bed, though it may appear so visually. Its ability to tear up a trail is what’s most charming, and its newfound abilities as a truck opens Jeep up to a large new segment of buyers. The Gladiator is still more Jeep than truck, but it’s great at being both.