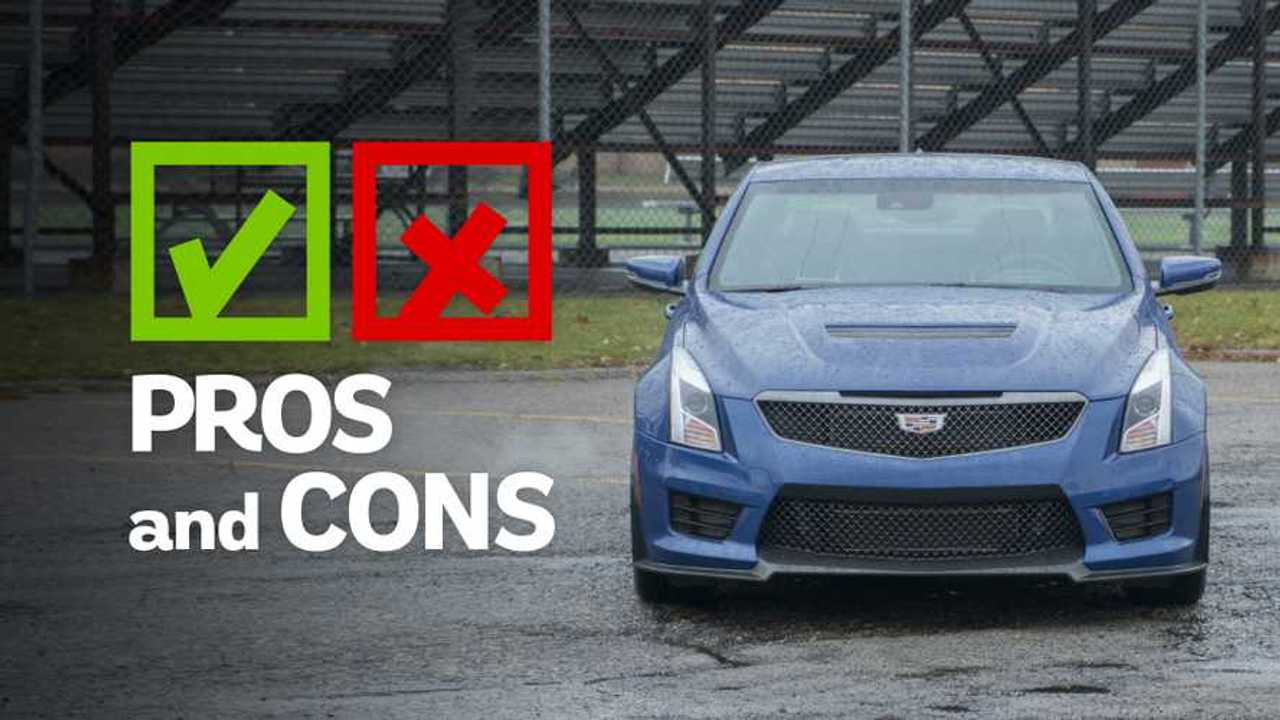 High-performance and style clashes with aging tech and a high sticker price.

The 2019 Cadillac ATS-V marches into the new year on its last leg. Cadillac dropped the sedan body style for this year, opting to go the two-door route only. But while the ATS-V will no longer challenge Germany's high-powered sedans, it continues to be a compelling alternative to the Teutonic two-doors. Offering just over 460 horsepower from a twin-turbocharged engine, a 3.8-second run to 60, and styling that still looks stellar years after its debut, there's a lot to like about the ATS-V.

But after a week behind the wheel, we also found a few issues with Cadillac's compact coupe. These are the Pros and Cons of the 2019 Cadillac ATS-V Coupe.

The ATS-V continues to use a twin-turbocharged 3.6-liter V6 with 464 horsepower and 445 pound-feet of torque. That’s more than the BMW M4 (425 hp/406 lb-ft) and the Audi RS5 (444 hp/443 lb-ft) and enough to get the compact Cadillac to 60 in just 3.8 seconds. On the road, this engine is a charmer, with ample low-end torque and a revvy character. It also sounds fantastic, with a sonorous V6 character and far less turbo noise than we’d expect from a twin-turbocharged engine.

The standard six-speed manual is pleasant, too, with a solid-feeling action that requires just enough force during shifts to make the driver feel like they’re manhandling the car. The standard rev-matching system takes a lot of the guesswork out of downshifts, which is good, as the clutch pedal is fickle.

A pricey option at $2,300, the optional Recaro seats look fantastic and are a great place to hang out, whether on a winding road or a track. Despite their aggressive bolstering, clambering in and out of the two-door ATS-V is easy. The seating position is perfect, with great sightlines and an impressive range of adjustments.

The ATS-V looks good. As Cadillac starts to tone down its design language with anonymous vehicles like the new XT6, the ATS-V is a reminder of how attractive the brand’s Arts and Science styling was. Sharp and angular, with a healthily flared wheel arches, a big rear wing, and a vented hood, this Cadillac is a pleasant reprieve from the smooth, organic styling of Germany’s competitors. We especially like the Wave Metallic paint of our tester.

It’s not that the ATS was ever a good sedan. It was too small and cramped for four adults. But it was also the only way to get GM’s excellent Alpha platform – which the ATS shares with the Camaro and CTS – in a compact, four-door package. And we like variety. As it is, the ATS-V Coupe is good, but we could get much the same experience, for a whole lot less money, and with a V8, in the Camaro.

The ATS-V comes from a time where Cadillac didn’t really understand how to integrate technology in a cabin. The touch-capacitive controls are unpleasant to use, especially for stuff like the volume control. And while other brands are adopting full digital instrument clusters, the ATS-V continues to employ a puny display on the bottom of the cluster. It’s customizable, which is helpful, but this screen is barely a step above an old rollover-style odometer.