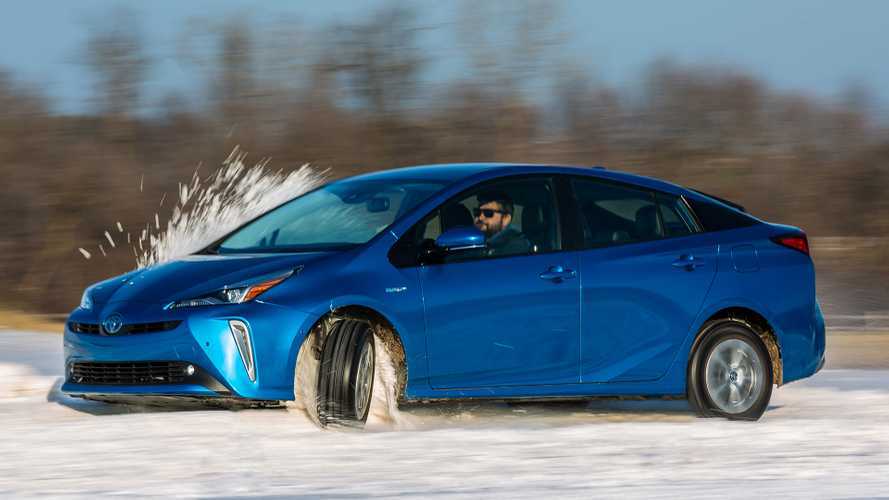 All-wheel drive is not new for the Toyota Prius. Japan, for example, has enjoyed four wheels turning in unison since 2016. Also, it’s not like inclement weather is a newly discovered phenomenon either. Perhaps four-and-a-half generations just seemed like the proper waiting period to add rear-wheel power to the world’s best-selling hybrid? No idea, but here we are with the 2019 Toyota Prius AWD-e, the first Prius in North America to offer all-wheel drive. First! (But really second.)

And why the “e” for the Prius’ AWD designation? Because like the line dancing song, it’s electric. The snow-season boogie woogie comes from a Toyota-first, independent, electric, magnet-less rear motor, which has an output seven horsepower and 41 pound-feet of torque. The system doesn’t require a center differential or front-to-rear driveshaft either, making it approximately 25-percent more compact than the all-wheel-drive systems in other Toyota vehicles.

Also, no magnet means less drag, helping the Prius AWD-e achieve a Toyota-estimated 52 city, 48 highway, and 50 combined miles per gallon. Not bad considering non-AWD versions post 54/50/52 mpg and the Eco model is rated at 58/53/56 mpg – all carryover figures from the EPA-rated 2018 model.

The AWD-e system powers the rear wheels from zero to six miles per hour, at which point the Prius will remain in front-wheel drive. Should vehicle sensors determine that driving conditions warrant the rear axle’s support, the on-demand system will kick in up to 43 mph – a speed determined by Toyota research and development to be where the vehicle’s peak efficiency and performance will plateau.

Besides, if you’re traveling at highway speeds, chances are you’re likely driving on heavily brined road surfaces anyway and won’t need all-wheel drive. If you’re not on a winter precipitation-free surface but like bombing across a frozen lake during a blizzard instead, then I would hope it’s in something other than a Prius?

Not that it wouldn’t be oddball entertaining. Which is why Toyota flew a few media folk out to the freezing temperatures of Wisconsin to test drive the new car on freshly powdered roads. Except there was no snow. Hell, it was sunny when I landed in Milwaukee. Can’t stop, won’t stop, though, as the Toyota team built a little Ice Capades rink for our pre-production fleet of Priuses. And why did they leave them equipped with the stock all-season, low-rolling-resistance treads? The better to feel the AWD-e system saving you from your enthusiastic (bad?) driving skills, my dear.

Although a small course, it was replete with a six-percent grade, speed bump, 90-degree corner, and chicane section. With no traffic or bystanders to scare, you could easily do a full run in less than 30 seconds. Front-wheel-drive models weren’t allowed on the hill, though, because no one in real life would drive up a slippery slope on all-seasons, right? So, minus the climb, let’s say 20 seconds. Of course, for the sake of science and safety, I waited until no one wanted to play anymore (i.e., post-lunch digestive malaise) and did multiple laps around the circuit.

My findings? I wanted to keep driving. In the Prius. AWD-e only, please.

Starting from a stop on the snowy summit, the Prius AWD-e showcased a teensy bit of tire spin. I’d attribute this more to the all-season slicks than the AWD system itself. On the curvy, all-dirt back stretch, I maintained a quick-but-not-reckless 30 mph and never considered the brake pedal until right before the jump into the right-handed turn. Then came the icy patch of S-curves.

Initially, we were asked to come to a complete stop before proceeding into this section. With a 0-to-60 mph speed probably in the teens (no official numbers provided), you can imagine that our slalom times were stunted. I never did go faster than 16 mph before having to stop because, in a blink, it was all over. Now, with the empty track all to myself, I blew by the imaginary stop sign.

The AWD-e allowed some slide, but I never felt out of control.

The corners were short and tight, but I managed about 25 mph of light drifting. The AWD-e allowed some slide, but I never felt out of control. And even with the winter-inappropriate tire set, the Prius AWD-e felt stable yet tossable in a giggly way. I mean, there is actual video proof of me smiling while behind the wheel. I did three reconnaissance laps and three more at speed before switching into a front-drive car. (Only because I thought the logistics guys wanted to go home.)

The two-wheel-drive Prius on crunchy slush was an entirely different experience. I traveled over the back stretch at an apprehensive 24 mph with my foot hovering over the brake, and body roll was more noticeable. I took the sharp corner much slower and the slalom felt like slow motion. Definitely more sliding, and the faster I wanted to go, the more the traction control system said no while the stability control tried to straighten me out. And so many flashing lights on the driver information screen! When I stopped in the middle of the coned section for a bulldozer reversing almost into my lane, forward motion was met with more wheel spin. Lesson: Wear winter tires in winter weather, regardless of drive system. Duh.

I did take an AWD-e model out on the cold-but-clear streets for a milkshake run, and it was worth it. For the milkshake, obviously. Without any reason for the rear wheels to need a boost, the Prius AWD-e drove pretty much like a regular ol’ Prius. It was quiet and didn’t require any brain activity to operate. Except for that wonky gear shifter. Because like the new-age, push-button gear selectors, I needed to look down when I shifted. And I just don’t like doing that.

What I like doing is flooring it. Usually on on-ramps. And I must admit, the sound from the Prius’ 1.8-liter four-cylinder wasn’t that bad. Some 2.0-liter engines can get wheezy and whiny on hard accelerations, but the Prius was a gradual crescendo. Not necessarily symphonic but not agonizing either.

The 2019 Prius features the Hybrid Synergy Drive system throughout the model line, which combines the internal combustion engine (ICE) and two motor/generators with a special continuously variable transmission that blends it all together. A carryover hybrid system, net output remains at 121 hp and 105 lb-ft of torque but Toyota suggested the AWD-e model might be slightly different, though negligible. No hard numbers were provided, however.

While front-drive models continue to pair the ICE with a lithium-ion hybrid battery pack, the Prius AWD-e features a nickel-metal hydride battery.

While front-drive models continue to pair the ICE with a lithium-ion hybrid battery pack, the Prius AWD-e features a nickel-metal hydride battery. The Ni-MH packaging is more compact and, like the new 2019 Corolla Hybrid, fits under the rear seats, having no impact on cargo space.

What else is new for 2019? To minimize complexity, the Prius drops its numeral naming of trims (Two, Three, Four, etc.) for L Eco, LE, XLE, and Limited, which familiarly aligns with the rest of the Toyota family. Note that the AWD-e is offered only on LE and XLE trims. According to the automaker, this strategy makes the vehicle available at the price range where most Prius buyers shop. Prius AWD-e is expected to make up 25 percent of total model sales.

The new Prius also does away with the contrasting white interior panels, replacing them with piano black inserts. While it no longer looks like a four-wheeled Apple Store, it also attracts dust better, too. Toyota repositioned the controls for the heated front seats for better ergonomics, moving them from next to the shifter to a slot between the cup holders and wireless charging panel.

Designers cleaned up the exterior styling, as well, redesigning the headlight, fog light, and taillight assemblies, and then updating the front and rear fascias. The Prius is still not going to win any Best Dressed awards, but does it need to? Even with car sales losing steam to crossovers and trucks, and with increased competition from new-to-market hybrid models, the OG Prius liftback is still a top choice with more than 4.3 million units sold globally (exclusive of Prius c, Prius Prime, and Prius v).

And, hey, there are new colors, too: Supersonic Red and Electric Storm Blue. They sound fast, even though the Prius is not. But maybe it could be? After all, even with two decades of hybrid dominance, it finally took an AWD version to make the Prius an interesting drive. And this time it has nothing to do with its looks.

The refreshed 2019 Toyota Prius and Prius AWD-e will go on sale next month.