Arguably, no vehicle is more responsible for our modern automotive landscape than the Toyota RAV4. Unveiled at the 1994 Geneva Motor Show, the RAV4 pioneered the contemporary crossover SUV blueprint of marrying the lightweight underpinnings of a car with the style, versatility, and upright seating position of an SUV.

Get the scoop on the RAV4: 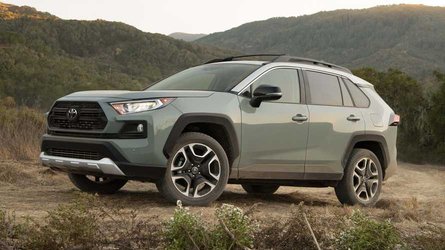 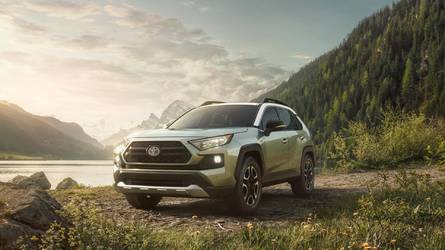 In the quarter-century since its debut, the RAV4’s essential ingredients now form the basis of every crossover currently sold. These high-riding hatchbacks also serve as the de facto moneymaker for most automakers, Toyota included. Last year, the RAV4 overthrew the Camry to become the best-selling unibody vehicle in the United States, and it’s on track to preserve its top-selling status through 2018.

Maintaining success, however, requires continuous innovation, and the redesigned 2019 RAV4 is a more competitive product without abandoning the core qualities that set the standard for this segment.

If the previous RAV4 was mild-mannered Clark Kent, then consider the new one Superman. Credit the Toyota New Global Architecture, otherwise known as TNGA (the same modular platform that underpins Toyota products such as the Camry and Avalon), and its 57-percent increase in structural rigidity relative to the prior platform, which, in conjunction with decorous damping, blesses the fifth-generation RAV4 with a stoic, luxury-car-like ride quality.

The RAV4 is surprisingly capable during more dynamic driving, as well. With limited body lean, a firm and reassuring brake pedal, and a fingertip-light tiller that adds appropriate heft through turns, the 2019 RAV4’s inherent nimbleness makes tackling twisting mountain roads a relative joy. While its steering lacks the tactility of the Mazda CX-5 and its not nearly as tossable as the Honda CR-V, the RAV4 is no longer a total dullard to drive with fervor.

The RAV4 is no longer a total dullard to drive with fervor.

Power comes courtesy of an agricultural 2.5-liter inline four-cylinder engine that whines angrily once the crankshaft spins beyond 4,000 RPM. With all 203 horsepower and 184 pound-feet of torque peaking at 6,600 RPM and 5,000 RPM, respectively, the engine is prone to racing toward redline when heavy throttle is applied. Nevertheless, limited wind and road noise make the cabin a pleasantly quiet place if the driver has a judicious right foot.

Despite its raucousness, the four-pot is a perfectly adequate performer. It’s powerful enough to move the RAV4 to 60 miles per hour in a little more than 8.0 seconds, according to the manufacturer, and efficient enough to return estimated fuel economy figures as high as 27 miles per gallon in the city, 34 mpg on the highway, and 29 mpg combined. All-wheel-drive models return up to an estimated 26 mpg city, 33 mpg highway, and 29 mpg combined. An eight-speed automatic is the sole transmission, and it astutely swaps cogs with buttery smoothness.

A gasoline-electric hybrid powertrain returns, too. Consisting of a more efficient 2.5-liter inline-four running the Atkinson cycle and a trio of electric motors, the system produces a total of 219 horsepower, can scoot the RAV4 Hybrid to 60 mph in 7.8 seconds, and returns an estimated 39 mpg combined. All-wheel-drive is standard on the Hybrid, and an electric motor that collaborates with the engine through a planetary gearset mimics the actions of a continuously variable transmission (CVT).

Although the low-level LE and mid-level XLE and XLE Premium trims make do with a traditional all-wheel-drive system that pushes power between the front and rear axles, the top-of-the-line Limited and rough-and-tumble Adventure models sport a more advanced torque-vectoring system capable of mechanically transferring up to 50 percent of the engine’s power between both the front and rear axles and the left and right rear wheels.

While individual needs will vary, the torque-vectoring system proved an impressive unit on both on- and off-road driving courses. On tarmac, the setup seamlessly shifts torque to the outside rear wheel at turn-in. The system can also disengage the rear driveshaft in certain conditions to send power strictly to the front wheels and improve fuel economy by limiting parasitic losses.

Off the beaten path, the all-wheel-drive system flawlessly moves power between the axles and wheels.

Off the beaten path, the all-wheel-drive system flawlessly moves power between the axles and wheels to help putter the RAV4 over obstacles such as dirt-covered inclines and medium-size moguls. Additionally, the hill-descent control system (a feature also restricted to the Adventure and all-wheel-drive Limited grades) allows the crossover to meander down steep declines without protest. 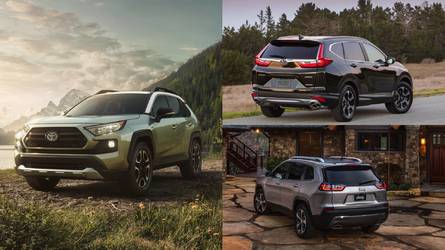 2019 Toyota RAV4: How Does It Stack Up Against The Competition?
⠀ 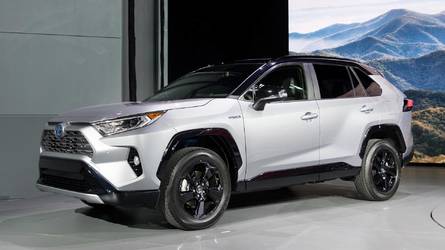 Now, the RAV4 Adventure is no substitute for a vehicle such as a Jeep Wrangler. But the model’s 8.6 inches of ground clearance (0.2 inch more than lesser LE and XLE grades) and 3,500-pound maximum towing capacity (2,000 pounds more than all other RAV4 trims) make it the most appealing RAV4 of the lot for light trail work or weekend jaunts with a small boat or camper in tow.

It also helps that the Adventure wears trim-specific kit such as a Tacoma-inspired maw, slightly flared fenders, chunky 19-inch wheels and tires, larger roof rails, and an available FJ Cruiser-inspired contrasting white roof that adds an extra splash of style to the model. Even so, every 2019 RAV4 benefits from more butch sheet metal that trades the soft curves of the previous model for harder edges and more SUV-like styling details, including a surprisingly long hood, upright greenhouse, and wedge-shaped rear end. Although its blocky proportions may not make it the prettiest compact crossover sold today, the 2019 RAV4 is certainly one of the toughest looking in its segment.

Underneath that stout exterior rests an amiable interior. The contemporary and chic dashboard design includes large controls for the climate system that move with a solid heft, while available 7.0- or 8.0-inch touchscreens for the infotainment system jut up from the center stack. Every RAV4 model (finally) offers Apple CarPlay compatibility (strangely, Android Auto compatibility remains unavailable).

In spite of a wheelbase that’s 1.2 inches longer than last year, the RAV4 actually offers marginally less front-seat room and cargo capacity relative to its predecessor. Still, the new model’s front chairs are immeasurably comfortable. Meanwhile, the RAV4’s 37.6 cubic feet of cargo room behind the rear seats betters the Chevrolet Equinox by 7.7 cubes, and only falls short of the generously sized CR-V by 1.6 cubic feet.

Regardless, the RAV4’s 105.9-inch wheelbase does afford the model a more spacious rear seating area, with those perched on the three-across 60/40-split-folding bench enjoying an extra inch of shoulder room, as well as 0.6 inch of additional headroom and legroom compared to last year’s model. Dedicated rear vents for the climate control and a pair of USB ports are standard on all but the base RAV4 LE.

No matter the trim, every RAV4 comes standard with active safety features such as a pre-collision system with automatic front braking, automatic high-beam headlights, lane-departure warning, lane-keeping assist, a lane-centering system, and adaptive cruise control. Toyota bundles these items under the Toyota Safety Sense 2.0 umbrella. A blind-spot monitor with rear-cross-traffic alert is optional on the entry-level LE, but standard on XLE, XLE Premium, Adventure, and Limited grades.

Innovation comes at a cost, albeit a small one. With a base price of $25,500, the 2019 RAV4 is $860 more expensive than its forebear. It’s also a good deal more expensive than the $23,800 Chevrolet Equinox and $24,350 Honda CR-V, although both competitors’ base models do without the RAV4’s long list of standard active-safety items. Choosing all-wheel-drive adds $1,400 to the bill, with the exception of the $32,900 Adventure, which comes standard with the feature.

The 2019 RAV4 is a strong compact crossover contender in a crowded class. Although it’s plagued by a middling engine, its distinct looks, rigid structure, and lengthy standard features list are sure to help the RAV4 retain its place as Toyota’s most popular vehicle. Look for the 2019 Toyota RAV4 to go on sale in December, with the $27,700 RAV4 Hybrid reaching dealers in March.