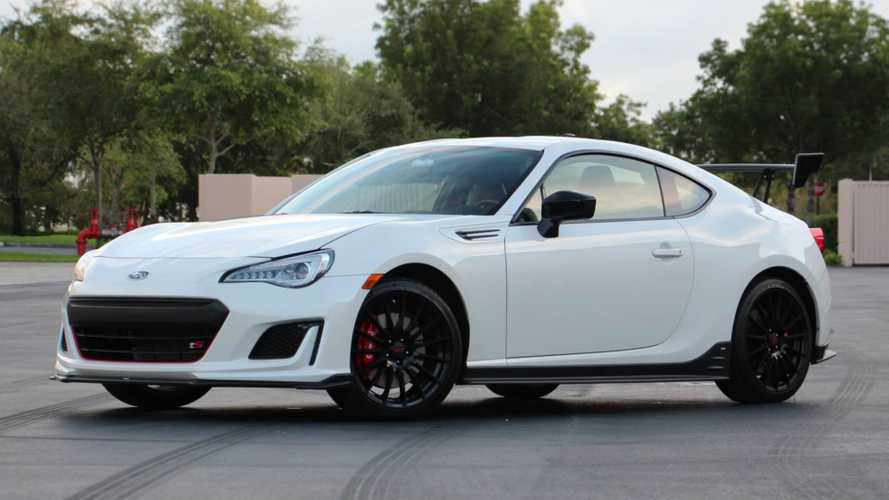 The Subaru BRZ tS is more than just a sporty face.

Let me burst your bubble up front: No, the 2018 Subaru BRZ tS does not have more power than its entry-level BRZ counterpart. Don't let the big wing fool you. What it does have, though, is a stiffer suspension and stickier tires that improve handling, extra downforce thanks to the flashy body kit, and a price tag that doesn't break the bank.

Watch Catastrophically Crashed Toyota 86 Drive Under Its Own Power

For just $34,000 you can take home this limited edition sports car – and after a week with it, we'd argue that it's worth every penny.

For $33,495, the Subaru BRZ tS is a relative performance bargain – assuming you can actually get your hands on one (only 500 will be built). The Chevrolet Camaro Turbo 1LE with Recaro seats costs a bit less at $32,590, and a comparable Mazda Miata RF with options like BBS wheels, Recaro seats, Brembo brakes will yield a price tag of more than $37,000.

The BRZ tS comes with all those fixins out of the box: Recaro seats, the crazy body kit, and Brembo brakes all come standard as part of the special edition trim. Both the Mazda and Chevy offer these features exclusively as options.

The Subaru BRZ tS looks like it belongs in a Fast and Furious film or a Need For Speed video game. The big, carbon-fiber-reinforced polymer (CFRP) rear wing, massive black 18-inch wheels, and red accents scream, “look at me!” perched atop the coupe's otherwise stylish exterior. At its core, the BRZ is a really pretty car, and, depending on the personality of the driver, these add-ons either attract or detract from the styling. We lean toward the former. Fanboys of the Honda Civic Type R and the BRZ's Subaru sibling, the WRX STI, should love the look of this car, too.

Like any tried-and-true sports car, the BRZ tS isn’t focused on comfort. The bolstered Recaro seats do a bang-up job of keeping your ass in place, but they aren’t redefining comfort.

The tuned suspension is too stiff – rougher roads left my back aching – and after just a few minutes of using the spring-loaded clutch, you’ll be wishing Subaru offered an automatic. And the cabin is loud – or at least, as loud as the regular BRZ.

That said, anyone with expectations of comfort are only kidding themselves. Just because the BRZ tS has a backseat doesn’t mean it was made for anyone larger than a toddler. This car was built for one or two people, and prefers a track or a smooth, twisty backroad. Sitting in traffic or attempting to jaunt around town on congested roads for too long will leave you hating yourself.

Even though the cabin is pretty sparse, the BRZ tS isn’t lacking in the tech department. It comes with both Apple CarPlay and Android Auto, and Subaru’s Starlink infotainment system. The seven-inch touchscreen isn’t the most advanced (touch responsiveness is poor and the graphics are tacky), but it does a fine-enough job in this application.

Disregard the haters that say it's underpowered, because in the turns, the BRZ can leave far more powerful, expensive cars in the dust. Its springs are 15-percent stiffer up front, and three-percent stiffer in the rear relative to the standard model, which helps tighten up the already responsive nature of the sports car. The sticky Michelin Pilot Sport 4 tires are a huge upgrade over the factory fitments of the standard car. Toss the BRZ tS into a corner, and – for lack of a better cliche – the car handles like it's on rails.

New 12.8-inch rotors sit up front and are clamped down by four-piston Brembo calipers. In the rear, 12.4-inch rotors pair with two-piston Brembos. That's a big upgrade over the 11.6- and 11.4-inch rotors found on the base model. And that extra braking power shows when you mash down on the brakes – the pedal firms up quickly.

The six-speed manual is the only transmission available on this trim level, but it's super snappy. The spring-loaded clutch, though, isn't as likable. The tiny catch point and heavy pedal feel make it especially tough to deal with stuck in Miami traffic instead of tearing up some twisty backroad somewhere.

Safety? Where we’re going we don’t need safety. The closest thing the BRZ tS offers in terms of safety is the backup camera… which is a requirement on all new cars nowadays. Outside of that, drivers are left mostly to their own devices.

The BRZ tS isn’t hugely efficient, despite its four-cylinder engine. The sporty coupe gets 20 miles per gallon in the city, 27 on the highway, and 23 combined, according to the EPA. Compare that to the Miata RF (26/35/29), and the manual, four-cylinder Camaro (20/30/23) – without the competitive Turbo 1LE package – and the BRZ is the least-efficient option of the bunch.