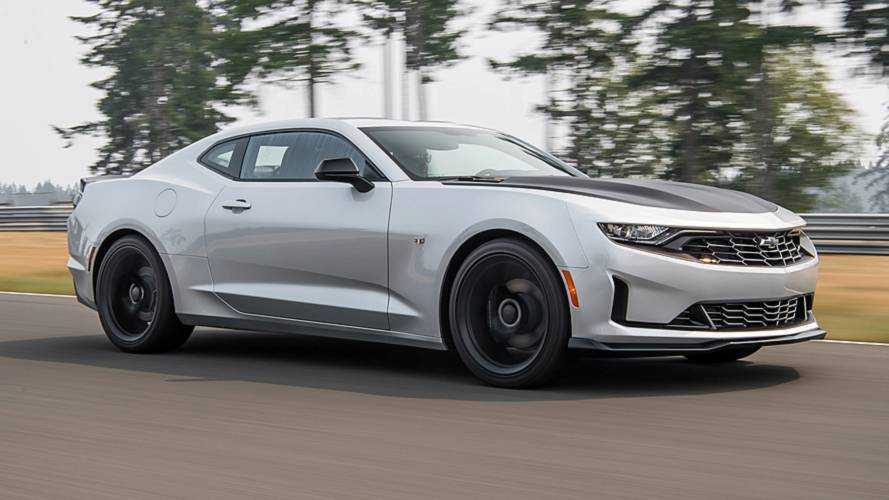 It’s no hatch, but it’s certainly gunning for them.

Chevrolet does not have a hot hatchback, and at the moment, that isn't likely to change. Sure, the Cruze Diesel Hatch is a lot of fun, but it won't be challenging the Volkswagen GTI, let alone monsters like the Honda Civic Type R or Ford Focus RS, for any titles.

And Now For Some V8 Camaros

Consider the 2019 Chevrolet Camaro Turbo 1LE an answer (or non sequitur) to these speedy five-doors. Taking the popular four-cylinder Camaro – it accounts for about a third of the car's sales – and marrying it with the V6 1LE's suspension, brakes, tires, and style opens this muscle car up to a new crop of consumers. Whether they'll respond to an interesting take on affordable performance that suffers from the Camaro's well-documented ills remains to be seen.

We're really not joking about this being a four-cylinder copy of the V6 1LE. It features the same suspension, four-piston Brembo-branded front brakes, Goodyear Eagle F1 Supercar rubber, and Track drive mode. There's a black hood – a proud tribute to the black-roofed racers that inspired the first 1LEs – and an Alcantara-wrapped flat-bottom steering wheel, as well as black wheels and badges. Park the V6 and Turbo 1LE side by side, and it's impossible to tell them apart.

Park the V6 and Turbo 1LE side by side, and it's impossible to tell them apart.

The differences from behind the wheel aren't all that dissimilar, either, aside from the big change under the hood. Chevy's four-cylinder engine is unchanged for 1LE duty, which is a bit of a disappointment. While it's worth celebrating a 275-horsepower, turbocharged, four-cylinder Camaro with 295 pound-feet of torque – it was barely 20 years ago that the 5.7-liter V8 in the Camaro Z/28 pumped out just 285 ponies, after all – we're having trouble getting excited about this engine, even in a track-adjacent model.

The engine produces plenty of torque and with little lag. It's certainly fun in an accessible sort of way – you can cane the 2.0-liter engine all day long over country roads without concern for speed limits, unlike the V8 Camaro SS or even the V6.

But this is a small, turbocharged engine with a high, specific output, so of course power falls off precipitously at high engine speeds, like we experienced at Ridge Motorsports Park. The 2.0-liter engine is just fine from idle on up to 5,500 rpm. But climb north, particularly past 6,000 rpm, and there's nothing but noise.

The sound is also uninspiring, and certainly not befitting a car with the Camaro's history or the 1LE's purpose. Chevrolet said it adjusted the sound output of the four-cylinder engine by adding a standard dual-mode exhaust, but it's more like the volume is at five or six, when it needs to be at 11, like two of the cars the Turbo 1LE takes aim at – the Ford Focus RS and Honda Civic Type R. Those purpose-built five-doors have a sound and presence that befits their high-performance purpose. The Turbo 1LE doesn't. It doesn't feel or sound like a Camaro, and that's a problem.

The 1LE is only available with a six-speed manual transmission, and it's a likable setup. The clutch is light and easy to figure out around town, and there's a satisfying feeling when slotting the short gear lever into its gates. That said, the throw is longer than we'd like, which is a problem when trying to shift quickly, like on a track. Even a long-armed driver has to stretch to reach fifth gear.

In the bends at Ridge, the Turbo 1LE is broadly as entertaining as its V6- and V8-powered siblings. Around the 16 turns and intense elevation changes of the 2.47-mile road course, the 1LE's tuned suspension and stout brakes performed flawlessly.

The Turbo 1LE is broadly as entertaining as its V6- and V8-powered siblings in the bends.

Because the lightweight 2.0-liter engine is set back in the engine bay – this is technically a front-mid engine layout – the Turbo 1LE enjoys an almost perfect 50-50 weight distribution. The result is remarkably predictable and poised handling when pushed. Feedback through both the steering and chassis is excellent, reaffirming the Camaro's position as the most dynamic handler of America’s three big muscle cars.

We like the 1LE's Track Driving mode, which firms up the steering significantly, while also granting access to the stability control's Competition setting. Around Ridge, even this ham-fisted author could push a little harder, as good nannies kept the bad ones at bay and let the Camaro get a little more loose, more playful, and well-suited to a track environment.

But is this better than the Civic Type R or Ford Focus RS, the two cars that raised the most eyebrows when Chevy named them as Turbo 1LE competitors during our tech talk? Not exactly.

The Camaro's dynamic threshold, grip, and poise are incredibly impressive for a car of this size. Because of the excellent balance and upgrades, the 1LE Turbo is far sharper than any other base-engined muscle car, and it's unquestionably the best dynamic bang for the buck in the muscle car segment. But it lacks the surgical precision of the Type R or the Focus RS' willingness to get wild. That last one is particularly tough. It's hard to drive the Turbo 1LE and not long for the more lairy character of the SS 1LE, a car whose attitude (while very different) matches up better with hardcore hot hatchbacks.

And then there are Camaro-specific problems. While it's the best looking variant of the updated coupe, style certainly is an issue. Beyond the Camaro's reputation as the perfect accessory to a sparingly groomed mullett, the 2019 car is simply not very nice to look at. There's too much going on up front, where the bulbous grille overshadows the pleasantly slim and stylish headlights. The body color divider between the upper and lower grille on the 1LE Turbo helps the look – it's better than the SS, with its gloss-black finish – but this is inarguably the ugliest of today's crop of muscle cars.

At the same time, the Camaro continues to suffer from its normal ills. It's still impossible to see out of. And even with our tester's optional Recaro seats – seriously, don't buy a Camaro unless you're planning on getting these chairs, because they're fantastic – and Alcantara wraps on the steering wheel and six-speed manual shifter, the cabin feels cheap and unpleasant, with plenty of hard plastic on the dash and doors.

Seriously, don't buy a Camaro unless you're planning on getting these Recaro seats.

The rear seats border on the vestigial, while the trunk could accommodate a weekend's worth of bags but not much else. Complaining about storage space in a muscle car might seem like picking nits, but it's a particularly valid point on a car like the 1LE. During our lunch break, we discussed at length with the other media in attendance the Camaro's inability to accommodate a set of spare tires, which are a must for any serious track-day participant (you know, the sort of driver the 1LE is built for). The Camaro's limited versatility is tolerable when competing against other coupes, but it's a real problem when trying to attract hot hatch customers.

The Turbo 1LE's strongest trump card, of course, is its price tag. The turbocharged, 2019 Camaro 1LT – the lowest trim available with the 1LE Package – starts at just $25,500. The 1LE Package adds $4,500 to that figure, while the must-have Recaro chairs are $1,595, for a total of $32,590 with the $995 destination charge. A comparable Mustang EcoBoost ($26,120), with the EcoBoost Performance Package ($2,495) and the $895 active exhaust (which requires the $2,000 101A Equipment Group, making its real-world price $2,895), rings up at $32,505 with the $995 destination charge. Keep in mind, that price doesn't include the Mustang's Recaro seats, which are only available with the $31,135 Mustang EcoBoost Premium. And while we haven't driven these cars back to back, if the comparisons we've read between the Camaro SS and Mustang GT (or the one we've written, for that matter) are any indication, the Turbo 1LE will likely prove the more enjoyable and dynamic vehicle for the money.

At the moment, Chevy is targeting about 1,000 Turbo 1LEs for model year 2019, which if last year's sales figures are any indication, would only account for about 1.5 percent of new Camaros and 4.5 percent of turbocharged models. That's not a hard number – according to Chief Engineer Al Oppenheiser, Chevy had a similar target for the ZL1 1LE, a car that's actually sold 1,600 to 1,700 cars. But the Turbo 1LE has a much tougher row to hoe, with more competition and different takes on performance for the money.

It's hard to predict if the Camaro Turbo 1LE will succeed, because it's just so much different than anything else in this segment. Still, this is a remarkably competent car, an entertaining two-door that's a real alternative to traditional hot hatchbacks. But if Chevy really wants to attract those customers, the Turbo 1LE needs more noise and more power. This is a (beautiful-handling, fun-to-drive) Camaro – but it needs to feel more like one.