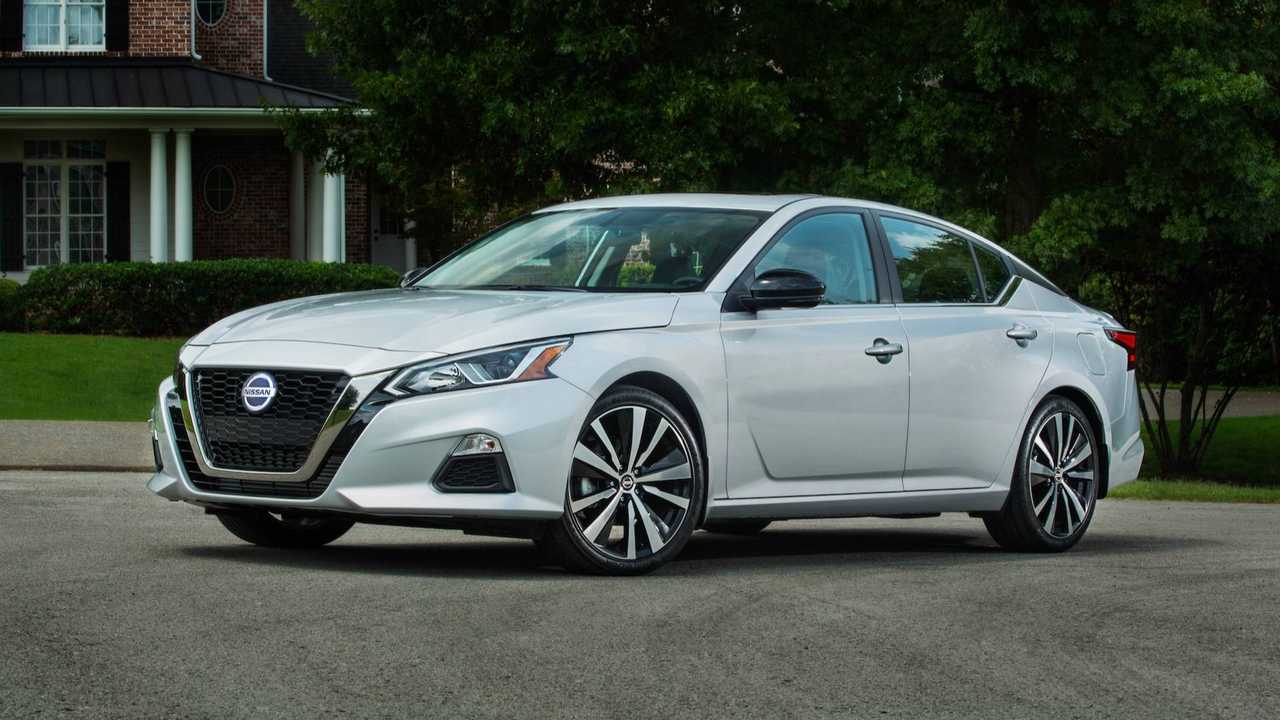 The new Altima is a stylish, sure-footed sedan that gets a big powertrain improvement.

You know the story: SUVs and crossovers are quickly taking the place of mid-size sedans. And with options from Honda and Toyota now better than ever, the 2019 Nissan Altima is playing catch up. Prior to this year, the last time the Altima received any significant update was in 2012. But this new model shouldn't have a hard time fitting in. Even with its position as an outlier among the more established crop, Nissan's new mid-sizer is sharper, safer, and with the addition of a new engine, more fun to drive. Not to mention it looks good.

I wasn’t sold on the Altima’s new look initially – but photos don't do this car justice. The sedan is sharp in person. Imagine a tighter, cleaner looking Maxima; the same stylish cues from the larger four-door carry over, including elements like the V-Motion grille – which now extends all the way down to the front splitter – the trendy floating roofline, and a nicely sculpted rear. Depending on trim, the Altima rides on 18- or 19-inch wheels, which gives it a meaner stance over the outgoing model's 17-inch fitments.

The new Altima is actually longer, lower, and wider than the outgoing model by one inch all around. Nissan extended the Altima’s 111.2-inch wheelbase by two inches, and with the new “D Platform” underneath, the Altima is 41 pounds lighter and 15 percent stiffer. Meanwhile, the engine now sits a few notches lower. All of these elements give the Altima an essentially all-new personality.

No, the Altima won't be winning any awards for its fun-to-drive character (both the Accord and Mazda6 are more dynamic), but there is something likable about the Nissan’s on-road persona. For one, it gets a brand-new engine. The available turbocharged 2.0-liter inline-four (dubbed VC-turbo by Nissan) – cribbed from the Infiniti QX50 and paired to a continuously variable transmission – is an absolute gem.

The available turbocharged 2.0-liter inline-four is an absolute gem.

The variable compression engine is quick to respond out of the gate and punchy at higher speeds. Passing on the highway takes as little as a quarter throttle pressure – power is always there when you need it. On paper, the engine puts out a modest 248 horsepower and 280 pound-feet of torque; however, the four-pot’s responsive nature in conjunction with the quick reactions of the CVT (it also does a solid impression of an eight-speed automatic transmission when you pull at the paddle shifters) makes the Altima feel much quicker than its numbers suggest. Even though hardcore horsepower fans might miss the Altima's 3.5-liter V6, the new variable-compression engine is an upgrade in every way.

Nissan offers one sporty-ish trim: the SR. But it's no Accord Sport or Mazda6 killer. The SR’s steering is tighter, the springs are 10-percent stiffer, and the trim-specific 19-inch wheels come wrapped in model-specific rubber. It's marginally more tossable than its non-SR counterparts and comes with either the optional 2.0-liter VC-turbo or the entry-level 2.5-liter engine that is mostly carry-over from the previous gen. We'd choose the former.

Even though Nissan says around 80 percent of the 2.5-liter engine’s parts are new, it still feels ancient. The inline-four produces 188 hp and 180 lb-feet of torque, but it feels underpowered for its class. The available all-wheel-drive system adds about 100 pounds to the Altima and hyphenates the limited power of the outdated engine. You can’t fault Nissan engineers for trying, though. Outside of the Subaru Legacy and Ford Fusion, the 2019 Altima is now one of the only sedans in the segment that delivers power to all four wheels. The setup itself is nothing game changing, but its availability is.

What the 2.5-liter engine lacks in grunt, it makes up for in efficiency. In the standard front-wheel-drive configuration, the larger displacement engine gets up to 28 miles per gallon city, 39 highway, and 32 combined. That's on par with – or just below – competitors like the Camry (28/39/32), and the Accord (30/38/33).

The biggest issue with the Altima is its available trim configurations. Nissan only offers the VC-turbo with front-wheel drive, and limits all-wheel-drive to the underpowered 2.5-liter engine. Nissan says a bulk of buyers will prefer the 2.5 with AWD over the VC-turbo. We'll agree to disagree.

Nissan says the bulk of buyers will prefer the 2.5 with AWD over the VC-turbo. We'll agree to disagree.

One of the biggest improvements to the Altima as a whole is the cabin. The clean lines and comfortable layout are a welcome contrast to the sharp exterior. The eight-inch, iPad-style touchscreen infotainment system (standard throughout the range) pairs with an ergonomically friendly arrangement of buttons for things like air-conditioning controls.

Style, though, doesn't give way to much substance, and there are a lot of hard plastics within arm's reach. None of the materials are hugely offensive for this class, but they're not on par with other upscale-skewing competitors like the Mazda6 and Accord. There is some reprieve in the form of simulated wood trim pieces and leather-appointed treatments with orange stitching – but you'll have to pay more to experience these niceties.

Basic, however, does not mean uncomfortable, and the Altima’s cabin is an agreeable place for hours at a time. Nissan's “Zero Gravity” seats are optional throughout the range, and are available in leather on SL and Platinum models, or with Nissan’s “Sport Combo” treatment (which combines cloth and faux leather). No matter the material, the optional seats are soft and supportive.

A leaner instrument panel yields additional legroom, too, and those up front are graced with 48.3 inches of legroom – a gain of 3.3 inches over the old car. That's better than the Accord (42.3), Camry (42.1), and Mazda6 (42.2). Backseat space takes a… backseat, though – the rear seats are down 0.8 inches from the previous model. The 35.2 inches of rear legroom is even less than the Versa (38.3) and Sentra (37.4), Nissan sedans that occupy the two segments below the Altima.

The standard eight-inch touchscreen infotainment system with Nissan's new NissanConnectSM ups the Altima's tech presence. It's the same setup you'll find on the smaller Kicks, and like the tiny crossover, works flawlessly; the screen is responsive and quick, and the graphics are crisp and easy to read. There's also a seven-inch driver-assist display in the gauge cluster that provides quick readouts of music, gas mileage, and other features.

The NissanConnectSM tech itself is easy to use. It offers a range of customization options for the home screen layout, as well as hands-free texting and Siri Eyes Free/Google Assistant voice recognition are standard. Apple CarPlay and Android Auto are also standard.

Where the Altima outshines its opponents is in safety. Yes, the Accord offers its admirable HondaSensing suite standard on all trims, but the ProPilot and intelligent cruise control systems – standard on SV and above – are next-level good, even if you can’t get them on every example. Combined, the Altima easily has one of the best safety systems in the segment; we cruised almost completely autonomously down the Pacific Coast Highway. Even tighter corners and heavier traffic didn't throw the safety system too far out of whack.

Even if you don't opt for ProPilot, though, the Altima comes standard with Nissan Safety Shield 360, which includes front, side, and rear sensing technologies. It also has four newly available safety systems that are offered throughout the range: rear automatic-emergency braking, an advanced traffic sign recognition system the uses both the front-facing camera and navigation data to determine legal speeds, and automatic emergency braking with pedestrian detection.

Buyers that are eager to get their hands on the new Altima can pick up the Launch Edition model, which, as its name suggests, will only be available for a few months after the sedan’s debut. It comes with the VC-turbo engine exclusively, as well as model-specific wheels, floor mats, and badging. It also comes standard with Nissan’s concierge service. Only 3,900 examples of the Altima Launch Edition will be available.

No matter the trim, the new Nissan Altima is a solid option that offers both top-class safety and solid dynamics in a stylish package. It’s no front-runner, but it retains its ranking as an interesting, consistent mid-size option that will undoubtedly find solid footing among family sedan buyers.