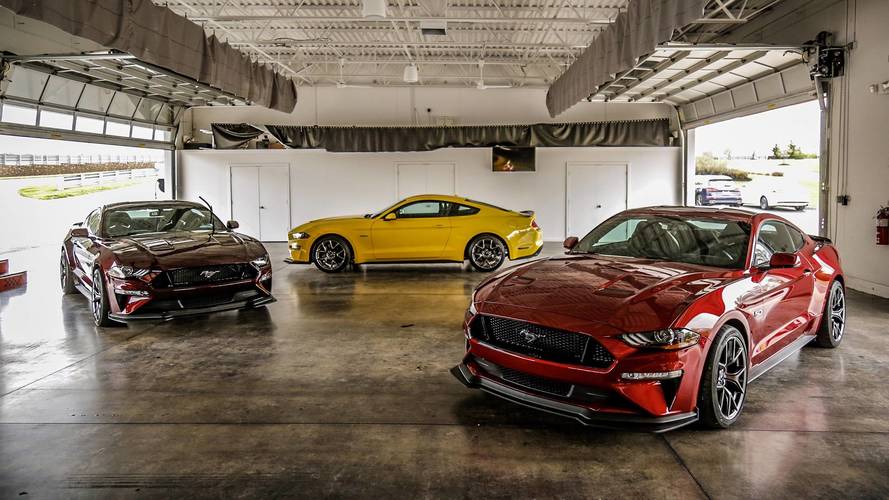 Ford’s latest Mustang track package is about $12K shy of a GT350, but is intimately close to the top Mustang in terms of seat-of-the-pants satisfaction.

My left foot enthusiastically stabs the clutch as my hand eagerly grabs for the Ford Mustang GT Performance Package Level 2’s six-speed shifter. I engage first gear, and there’s that familiar “thunk.” Ever since the S550-generation ‘Stang was introduced in 2015, I’ve treated that noise as a secret code signifying, “Come hither and make mischief with me.”

But now there’s even more mischief to be made with the Performance Pack Level 2. For $6,500 on top of a standard Mustang GT, you get chassis and aerodynamic improvements that are above and beyond what you get with the Performance Pack Level 1. For starters, magnetorheological dampers come standard. On the Performance Pack 1, which costs $3,995, you still have to pay $1,695 to get MagneRide, so in reality, the PP2 is only $810 dearer than the PP1. Those extra Benjamins get you quicker steering, a mean-looking set of “Dark Tarnish” 10-spoke, 19-inch wheels, Michelin Pilot Sport Cup 2 tires that are 1.5 inches wider all around, and a ride height lowered by more than half an inch.

And that’s not all. Up front, the Performance Pack 2 boasts a stabilizer bar that’s 12 percent stiffer, while in back it’s 67 percent stiffer. Ford then beefs up spring stiffness by 20 percent at the front, and 13 percent in the rear. Rounding out all the improvements is a new front splitter that creates 24 pounds of downforce at 80 mph, and that’s balanced at the rear with a package-specific rear spoiler.

With all those improvements, the temptation to drive at 11/10ths is permeating my being, but responsibility prevails.

“Not so fast,” I say to this car. The roads are still slick from the tornado that whipped through Monticello, New York the evening before. Several trees have fallen to their deaths along portions of our street drive route, and this Performance Pack Level 2-equipped pony is riding on a square set of 305mm-wide tires that are a few grooves shy of being racing slicks. You could say conditions are less than ideal for the “razor’s edge” version of the Mustang GT.

But behind the wheel of Ford’s newest Mustang, I’m swaddled with assurance in Recaro seats. I say “swaddled” because while the chairs do a terrific job of keeping you in comfort and in place under heavy cornering loads, my thin frame (five-foot, ten-inches and 140 pounds) sinks so deeply into them that I can barely dial a quarter turn of steering lock before my upper arms dig into the aggressive bolstering. If I want to steer any more than that, I have to lean forward so that my arms can move freely. Unfortunately for thin people like me who prefer the Mustang’s standard seats, the Performance Pack Level 2 makes Recaros compulsory. However, if you’re a normal member of the majority with meat on your bones, you’ll be spared the straight-jacket effect.

All things considered for the majority of meaty drivers, however, this car is better off with compulsory Recaros. Those tires grip like an armed robber clawing at a cash register, and just the slightest inclination of steering angle at speed will let you know it.

The quick-ratio steering’s turn-in is immediate and smile-inducing. On my street drive loop’s slower sections, I find myself slaloming like Senna during a caution lap. Bodyroll? Ha! This Mustang’s standard magnetorheological dampers are too cool to make this car lean perceptibly. The icing on the cake is how well it rides. If you live in a drier climate that won’t make those semi-slick PS2s useless as soon as the heavens dump water, the Mustang’s new track-friendly package is a great candidate for daily driver duty.

Ford is marketing the Performance Pack 2 Mustang as a midpoint for the third-base Mustang GT and the home-plate GT350. It only takes a few jabs at the controls to find that Ford has accomplished its mission.

In a regular Mustang GT, within the first 30 seconds behind the wheel, you can feel the muscle car DNA filtering through your perceptions. The 5.0-liter Coyote V8 rumbles through the cabin, snarling and snorting American exceptionalism. Quick blips of the throttle, just through a parking lot, make the GT a rocking horse. It doesn’t feel old, but it feels like it’s paying homage to its heritage, and that’s charming, especially to a classic Mustang owner like me.

The Mustang GT350, in OLED-display contrast, is a brain surgeon’s scalpel. It’s a world-class sports car that makes you reevaluate your desire for a certain rear-engine German machine. It’s a Nürburgring tarmac-killer cloaked in muscle car clothing – a veritable Trojan horse free to enter the kingdom of old-world vehicle dynamics snobbery.

It doesn’t feel old, but it feels like it’s paying homage to its heritage.

Now the GT Performance Package Level 2 can enter that kingdom right behind its bigger brother. The new Mustang performance package makes the GT handle about 85 percent as scalpel-like as the GT350. Dynamically, it doesn’t feel like a muscle car at all. It feels like an accomplished sports car with a muscle-car motor... until you rev it to its 7,500-rpm redline, at which point the Coyote edges on exotic.

Off my street drive loop and onto my initial laps at Monticello Motor Circuit, I’m so focused on memorizing my turn-in and apex targets, that my natural inclination is to short-shift. Short-shifting happens by default to anyone getting behind the wheel of a GT350 for the first time. It takes a minute to get used to shifting a Mustang at 8,500 rpm. The same goes for any 2018 Mustang GT. This model year gave the Coyote engine a refresh that allows the “five-oh” to rev 500 rpm higher than the 2017 Mustang GT.

As a result, if you fail to glance at your instruments while you’re acquainting yourself with the car, you’ll predispose yourself to short-shifting in spirited street driving or around a racing circuit.

A couple laps into my weave through Monticello Motor Club’s meandering tarmac and elevation changes, I find myself in third gear for the majority of the course without knocking against the rev limiter. The newest Mustang GT may not have the low-end grunt that its arch-rival, the Camaro SS 1LE may have, but the Coyote’s immediacy between 4,500 rpm and 7,500 rpm makes up for it.

It only takes me a few turns at Monticello to sense the passion put into this edition of Mustang. Outside of their official nine-to-five duties, Ford engineers worked after hours to bring this vehicle to market in order to launch another left hook into Chevy’s rib cage.

The horsepower and performance wars are fiercer than ever, and that’s especially true in the legendary Camaro-versus-Mustang battle for supremacy. Is the Performance Pack Level 2 better than the 1LE? It’s too close to call without a back-to-back test drive, but when it comes to price, at $6,500 on top of a base GT, as close as the PP2 feels to a GT350, the new package should make a lot of sense for Mustang fans.