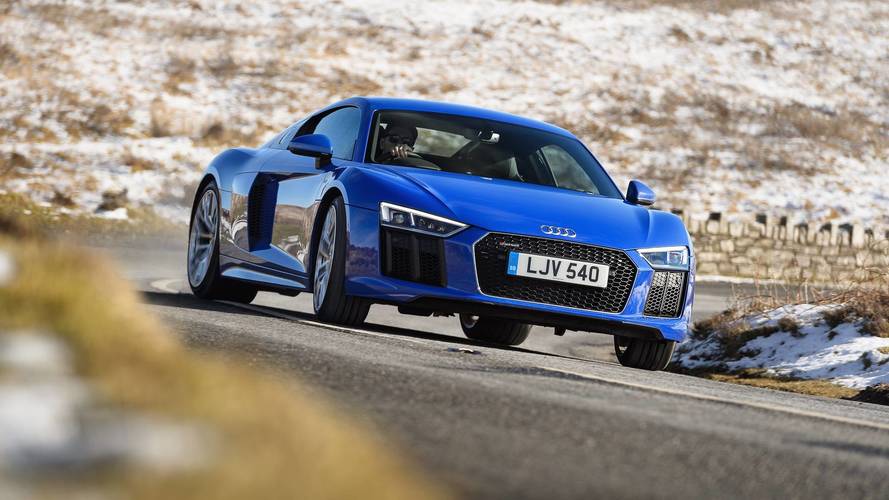 Here’s the car Audi said it would never make: a rear-wheel-drive R8.

This car shouldn’t exist. It’s a unicorn in vehicular form: a rear-wheel drive Audi. And not just any Audi, but the pinnacle of Audis – the R8. Welcome to the car that Audi Sport said it would never do, the awkwardly named Audi R8 RWS, or Rear Wheel Series.

So, the engineers made a rear-wheel-drive R8 – is it all roll-caged-up and hardcore? Nope. Not even a little bit. In fact, you’d struggle to differentiate the RWS from the standard R8 models if you saw it on the street. So if you're expecting this to compare to the R8 like the GT3 RS does to the 911, you'll be quite underwhelmed.

Key visual indicators are the matte-black grille and apertures at the front and rear of the car, and a gloss-black upper “blade” trailing off the window line. There are unique five-spoke 19-inch wheels, or the 20s pictured here are optional. You can, of course, jazz your R8 up with bespoke paint (including matte paint) with Audi Exclusive finishes, and that blade can be a contrast color, or indeed carbon fiber, if you’ve got the cash to pay for it all.

Mechanical changes are surprisingly mild. Obviously the front driveshafts have disappeared and that’s helped to save 110 pounds over the all-wheel-drive car, but there’s also a thicker front anti-roll bar, slightly tweaked steering software and suspension setup, and a mechanical limited-slip differential instead of the electronically actuated affair on the standard R8.

Perhaps more telling is what you can’t add to the R8 RWS, given that the adaptive dampers and variable-ratio Dynamic Steering are missing from the options list. The latter item is a particular blight on the standard R8, so good riddance to that.

The RWS is also the same as the normal R8 inside, which is to say that it’s one of the most comfortable and usable interiors that you’ll find in a supercar this side of the Porsche 911. Ultimately, a 911 is certainly easier to get in and out of, and has more space, but the R8 is a close second for everyday ease of use.

As the subtle visual changes suggest, this is not the huge departure in character from the standard R8 that you might expect. But it is even better than an all-wheel-drive R8, and that’s really saying something.

The steering is a particular delight that you don’t get in the standard car. It’s got a sort of mesmeric silkiness to it that sucks you from one apex to the next. Its weighting is slightly inconsistent, but the way it makes you feel dialled into the car, and the almost pre-cognitive response it delivers, is a delight whether you’re flinging it down a mountain road or changing lanes on the highway.

Which is good, because you’ve got masses of traction and the planetary-like forces of that 5.2-liter V10 to take charge of. So don’t think that this is going to be a flighty, oversteery car. It’s not. Even in the cold, wet, and generally arctic conditions that the U.K. provided for this test, it’s confident. It’s a bulldog of a supercar: broad-chested and assertive, and stuck fast to the spot you want it to be in.

The RWS still has rewarding delicacy to the way it jinks through direction changes, and you can of course flick it into a bit of oversteer if you wish. But unless you do something slightly foolish, it’s not going to dispatch you into the scenery unexpectedly. Those dampers are great, too. Stiff enough that you're always conscious you're in a supercar, but they never make the R8 feel crashy or harsh. As if you needed confirmation, this is a car that you could genuinely live with every day.

It really does feel much like the standard Audi R8, but purified. Still approachable and easy to use, yet darty, precise, and grippy – and that sense that the car pivots freely around you (characteristic of mid-engined cars) is evident even in mundane driving.

The RWS just has a more organic, natural sense of connection. A smidge more willingness to reveal the true fiery, supercar nature that every R8 does have, but that’s often hidden beneath arguably too-polished manners that can actually make it feel underwhelming on first acquaintance – like it’s just a very fast TT. The R8 RWS is a nod to the purists among us, but a surprisingly subtle one.

Ultimately, you still buy the R8 – RWS or not – for that engine. For 10 cylinders, 5.2 liters, 540 horsepower and 8,700 rpm of shock and awe. Praise be to the spirits of all things mechanical, having this engine responding to your right foot is a religious experience for any car-loving soul.

Make sure you add the £1,800 (about $2,500) sports exhaust – it's an absolute essential. With it, the R8 is quiet enough in Comfort or Auto mode, but with all due respect, you’re in a supercar. Man up, hit Dynamic, and be amazed. Be addicted. Just be willing to spend all day obsessing over the noise, the relentless power delivery, the general headiness. One day, in the probably not-too distant future, this engine will go out of production, and we should all wear black armbands for a very, very long time.

The V10 is the best engine in “mainstream” production. It is brimming with joy and delirium, and it wails and screams, and pops and bangs, and we would sell significant organs and family members if we could get one in the Motor1.com fleet for good. Sorry McLaren, Porsche, Ford, Ferrari… You make some astonishing engines, but holy hell this V10 is more a thing of wonder than it is of metal and oily bits.

Like you need to ask? Yes, of course. This is the best R8, and it’s also the cheapest at less than £113K (about $156,000) for the coupe. Not only that, but the RWS is limited to only 999 examples worldwide, so there’s a very desirable rarity factor, too.

Sure, if you’re expecting it to feel dramatically different to a normal R8, you’ll be disappointed. And it doesn’t have the visual flair and handling delicacy of a McLaren, nor is it as easy to live with as a Porsche 911 Turbo, but the RWS is truly spectacular regardless of those facts. So let’s hope that Audi does make more rear-wheel-drive performance cars, as the ‘Series’ aspect of the RWS name suggests.

So forget the snow and ice, and that nagging belief that all-wheel drive will make you infallible regardless of the conditions, because it really doesn’t. You’re buying a supercar. So if you’re buying an R8, do it for yourself, do it for the rest of us who can’t afford one, do it because this is the best one. Buy the rear-wheel-drive one.

And if you’re not quite up for dropping the all-wheel drive, just buy anything with this engine in it, because one day you won’t be able to. And that’ll be the saddest thing of all.