There’s a lot to like about Buick’s new Regal Sportback, but not enough to be compelling.

Despite their incredible popularity, not everyone wants a crossover these days. Buick is smart to have bolstered its CUV lineup in recent years; its steady sales increases are no doubt the result of Encore, Envision, and Enclave successes. But with the launch of its 2018 Regal, Buick is proving you don’t have to cross over to get functional utility, offering a Sportback body style with 60.7 cubic feet of usable cargo space. Unfortunately for Buick, there isn’t enough goodness about the rest of the Regal to make it a truly compelling package.

It’s certainly handsome, at least. The new Opel Insignia looks great, and none of that is lost in the Americanized, Buick-badged reskinning. There’s an inherent sportiness to the sharp headlamps and swept-back roofline, though the chunky taillamps appear a bit too large (and too bland) for this elegant shape. Standard 17-inch wheels don’t drown in the wheel wells, and the larger 18-inch set pictured here gives the Regal a really nice stance.

Rather than a normal trunk as you’d expect to see on a car like this, there are hinges at the top of the rear window, meaning the whole back end lifts up, revealing a capacious cargo hold – hence the Sportback name. With the rear seats in place, there’s 31.5 cubic feet of space, with a low load-in height and wide aperture to the opening. But fold those back seats and you get the aforementioned 60.7 cubic feet of space, which even bests the 57.3 cubic feet offered in Buick’s midsize Envision crossover. As the automaker was keen to demonstrate during my test drive in Austin, Texas, you can put a bicycle in the back of the Regal without needing to remove the front wheel. That’s just one of myriad ways this Sportback design is super handy. 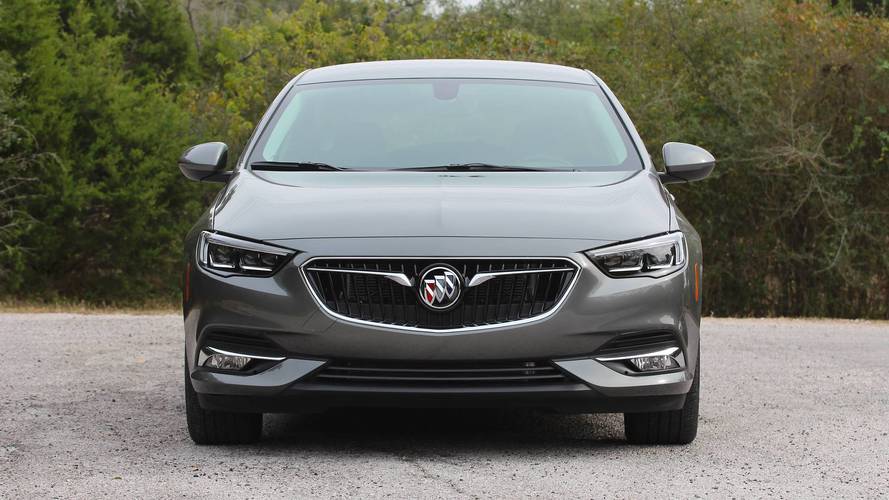 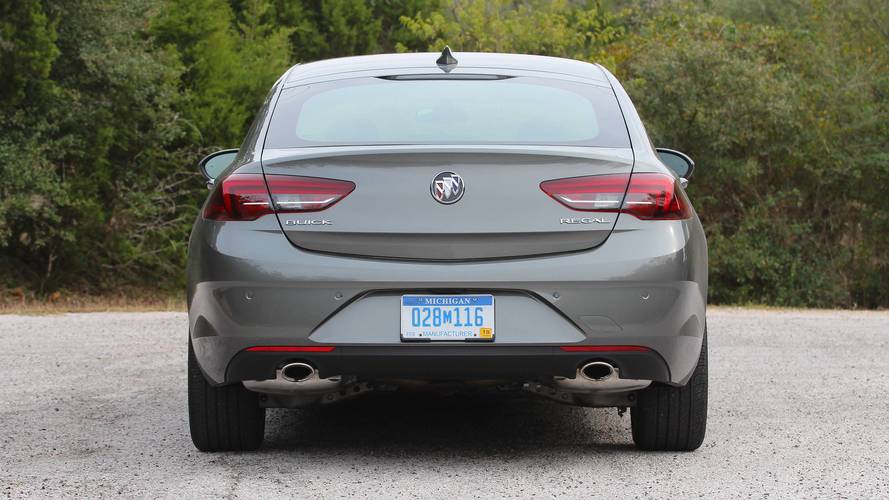 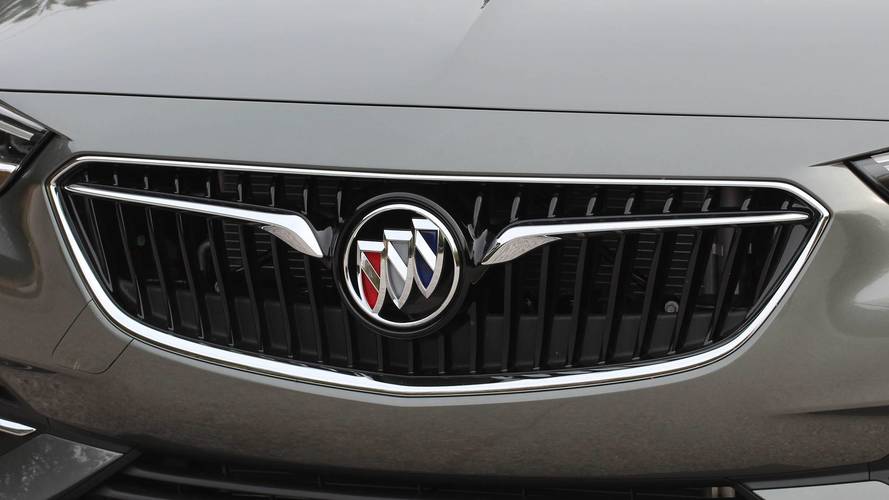 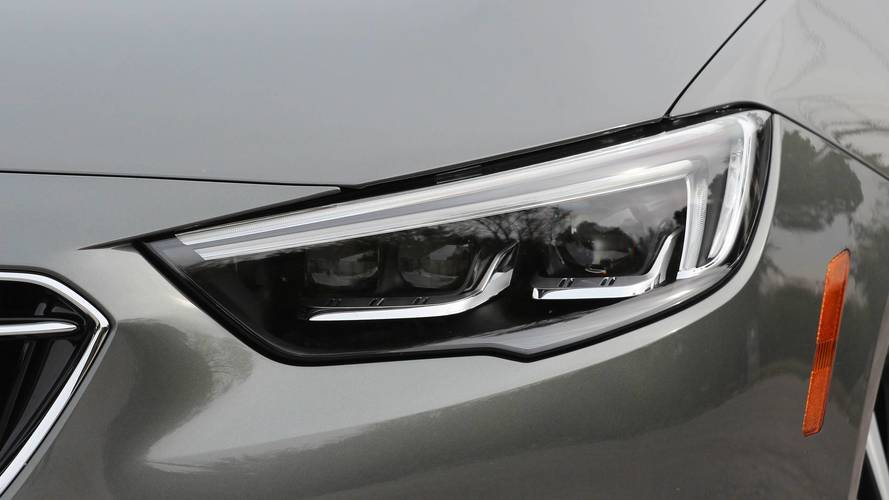 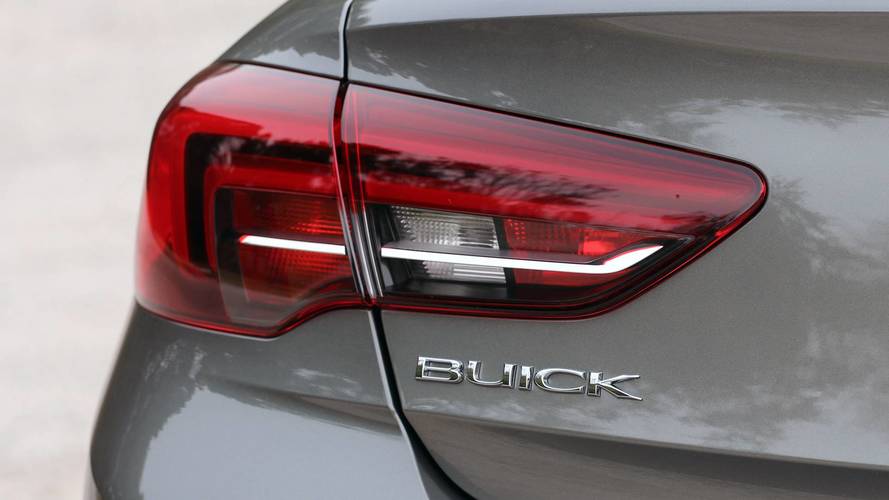 Fold the back seats and you get 60.7 cubic feet of space, which actually bests the 57.3 cubic feet offered in Buick’s midsize Envision crossover.

That said, I’m not nearly as positive about the rest of the Regal’s interior. It appears nice to the eye, and all of the vehicle’s controls are organized in a simple, logical fashion. But most of the materials are downright lousy, way below what you’d reasonably expect in a car that costs $36,000 as-tested. The dashboard and door panels are covered in this kinda-soft-touch material that feels more like rubber than anything else (with fake detail stitching, for some reason), and the plastics used on the lower door and dash panels are bad to look at and worse to touch. There are strange panel fitments and surprisingly sharp edges – I shaved off a bit of skin when I simply ran my hand over this gap on the transmission tunnel to the left of the shifter. Yikes.

That’s not all. The seats are comfortable, but the material feels like vinyl, not real leather. And in fact, the leather on the steering wheel feels like an entirely different material. The “wood” accents are laughably fake. The turn signal and wiper stalks are some of the cheapest I’ve ever touched (I’m pretty sure GM has been using these for at least two decades). There’s a horrible “thunk” from the steering tilt/telescope release. Buick’s eight-inch IntelliLink touchscreen infotainment system looks a generation behind the times and is relatively slow to respond, but thankfully, Apple CarPlay and Android Auto functionality is standard on all trims.

I’ll give Buick the benefit of the doubt: the Regal isn’t officially on sale yet so these might be pre-production test cars, and the cabin is very hushed, the company’s “QuietTuning” efforts in full effect, including insulated tires that actively keep road noise from entering the cabin. Honestly, though, I know Buick/GM can do better. I rode in an Enclave on the way to the airport following my Regal test, and it was great. 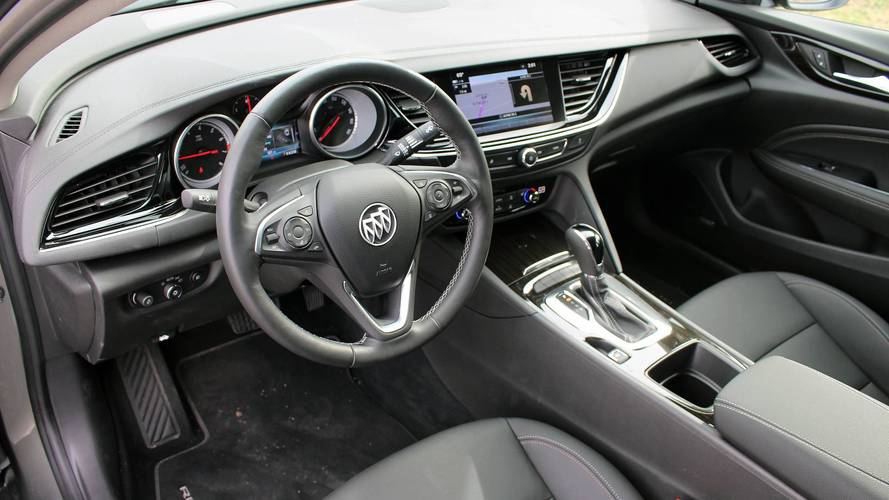 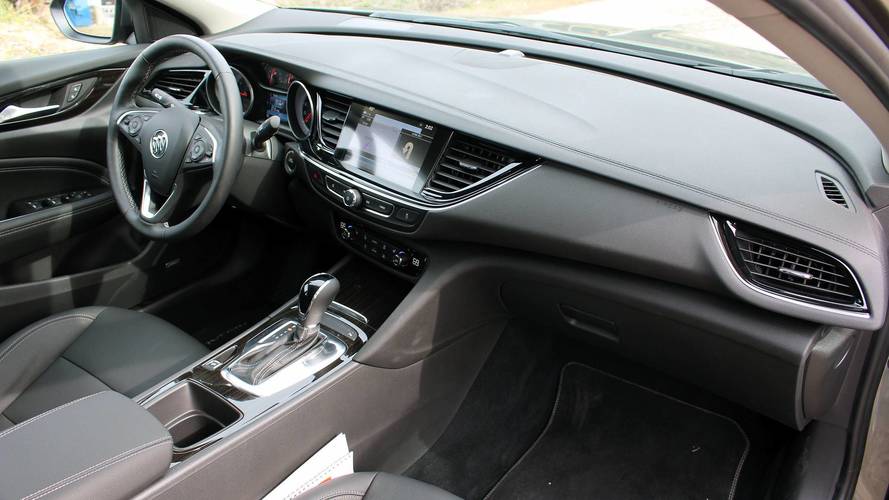 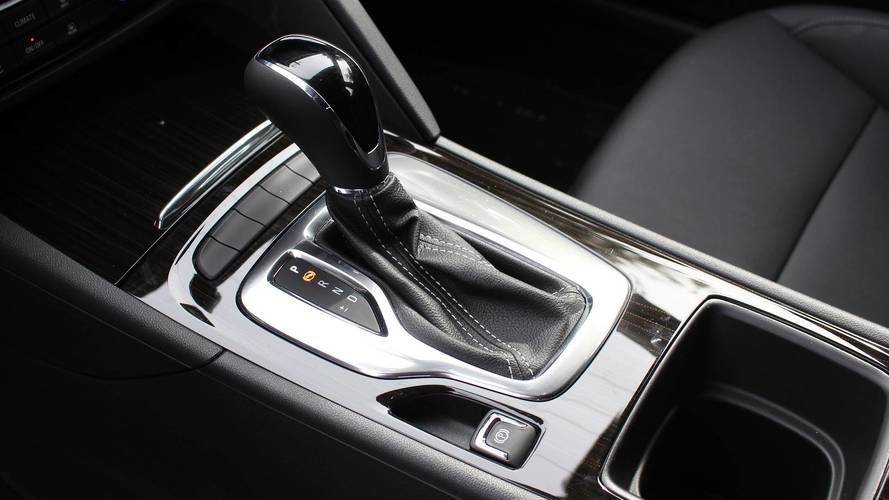 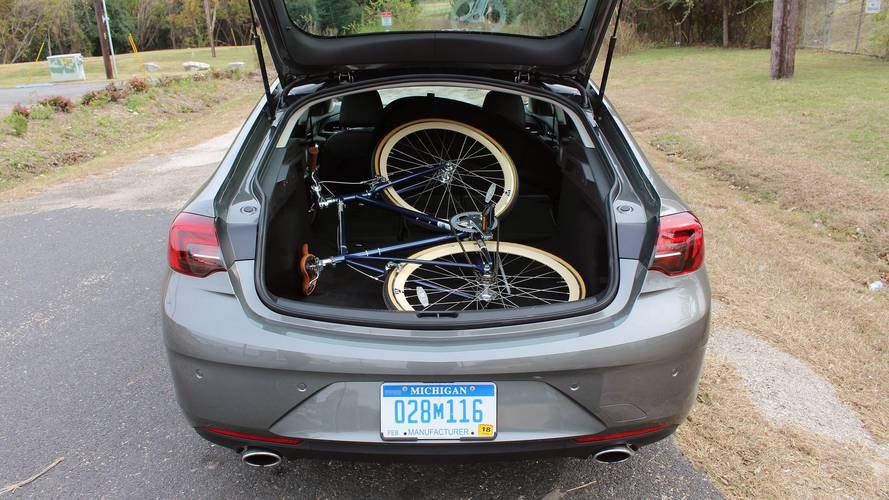 Most of the materials are downright lousy, way below what you’d reasonably expect in a car that costs $36,000 as-tested.

At least the Regal’s driving dynamics prove there’s some enjoyment to be found from behind the wheel. All Regal Sportback models use GM’s Ecotec 2.0-liter turbocharged inline four, and it’s a refined, powerful engine. Both front- and all-wheel drive are available, and there are benefits to either configuration. With front-drive, you get 250 horsepower and 260 pound-feet of torque, and a new nine-speed automatic transmission, which helps the Regal get 22 miles per gallon city, 32 mpg highway, and 26 mpg combined. The all-wheel-drive car uses an eight-speed automatic transmission, and while you do get an additional 35 pound-feet of torque, not to mention better all-weather grip, fuel economy ratings drop to 21 mpg city, 29 mpg highway, and 24 mpg combined.

Along the winding roads of Texas Hill Country, the Regal is both smooth and spirited – eager to be tossed into a bend now and then, but refined and composed while doing so. There’s ample power from the 2.0-liter engine, and in the front-drive car, I don’t get the sense that I’m missing the extra 35 lb-ft of the AWD setup. Power comes on progressively, with very little in the way of turbo lag, and both eight- and nine-speed transmissions are programmed to keep the engine humming in the peak of its powerband. Shifts are executed smoothly, and while the eight-speed can often find itself dimwitted during a sudden demand in acceleration, the nine-speed transmission never exhibits any sluggishness.

Similarly, the Regal’s handling characteristics are worthy of faint praise. There’s little roll, and on the up-and-down whoop-de-dos outside Austin, the Sportback’s body motions are controlled and composed. Brake feel is solid, with progressive weight build under your foot. I could stand to have a slightly better steering tune, with improvements in both weight and communication, but I imagine the vast majority of Regal buyers won’t complain. 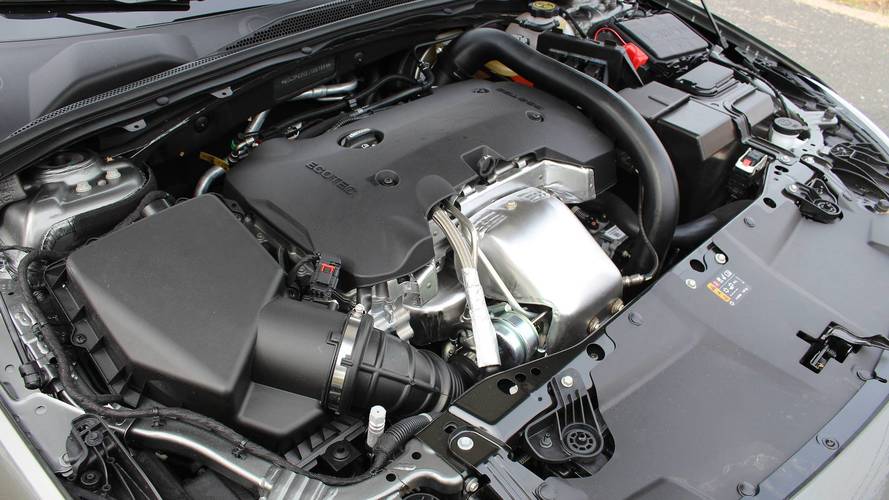 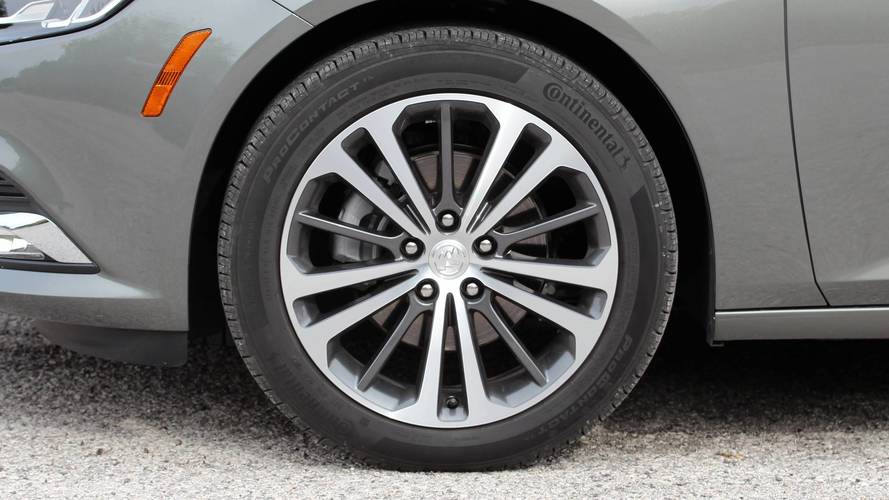 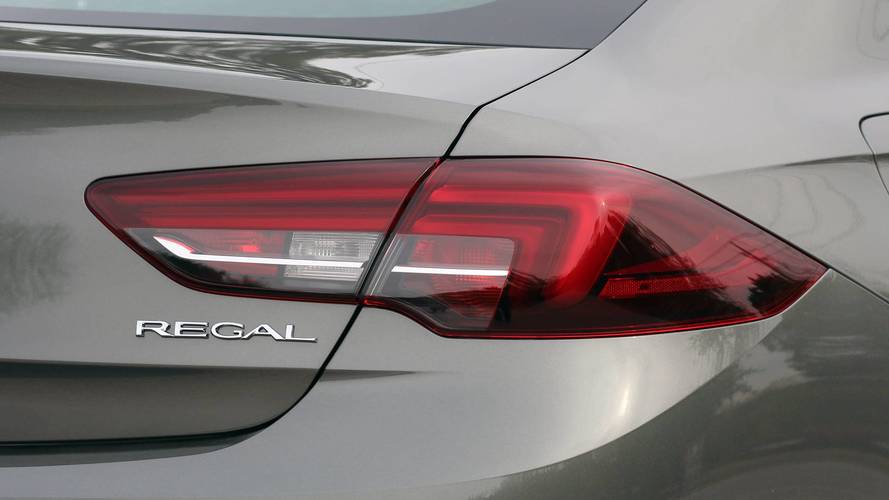 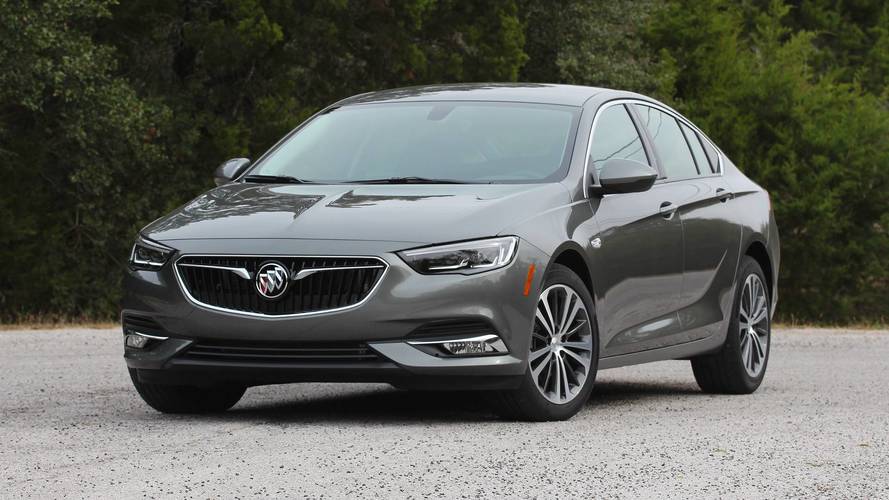 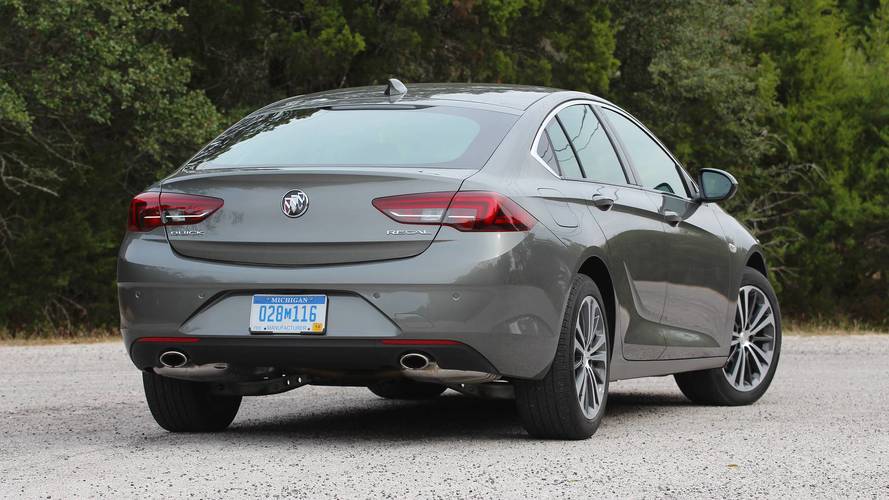 The Regal Sportback’s party trick of great utility isn’t enough to make me recommend it over any other midsize sedan.

That said, I’d just as well drive a new Honda Accord 2.0T or Mazda6, both of which have better steering feel and equally good levels of control and compliance. Buick says the Regal’s key competitors are the top trim levels of mainstream midsize sedans, none of which offer a Sportback configuration, and most of which can’t be had with all-wheel drive. But a 2018 Accord Touring has a far nicer interior, much better tech, more rear legroom, it’s just as quiet inside, and compared to a similarly optioned Regal, the Honda is about $2,500 less expensive.

Regal pricing starts at $25,915 for a front-wheel-drive 1SV, but to get a version that actually feels like a luxury competitor, you’re looking at $30,655 for a Preferred II trim. Niceties like leather and heated seats aren’t available for less than $32,655 on the Essence trim, and fully optioned, you’re right around $36,000. That does represent a bargain over competitors like the Acura TLX and Lincoln MKZ, but (1) the higher price points of those cars reflect much nicer interiors and (2) again, I’d rather just have a loaded Accord.

The Sportback configuration is the most compelling part of the Regal package, though that’ll soon be overshadowed by the very cool Tour X wagon that arrives next year. And if you dig the Regal because it’s nice enough to drive, perhaps you’d rather have the sportier GS, also in the pipeline for 2018. For the time being, the Regal Sportback’s party trick of great utility isn’t enough to make me recommend it over any other midsize sedan, and honestly, if huge functionality is one of your must-haves for a new car purchase, you’re probably just shopping crossovers anyway. If that’s the case, you’ll just end up where most Buick buyers have over the past few years, in one of its CUVs.