If you liked the last QX80 you drove, you’ll like this one – because it’s pretty much the same.

In 2010, the world was introduced to Christopher Nolan’s Inception, Katy Perry’s “California Gurls,” and AMC’s The Walking Dead. It was also the year we met this generation of the Infiniti QX80. Back then it was called the QX56, and there was a significant update to the SUV in 2013. But this updated 2018 model – effectively the second-gen car’s second refresh – does not feel particularly new.

It does, however, look new from every angle. With svelter headlights (LEDs are standard), a wider and more upright grille, sharp strakes in the hood, and the fact that said hood extends 3.5 inches farther forward than before, the new QX80 at least appears fresher. The 20- and 22-inch wheels have been redesigned, the running board is wider to make it easier to stand on, and out back you’ll spot redesigned taillights, restyled chrome trim, and a new bumper. 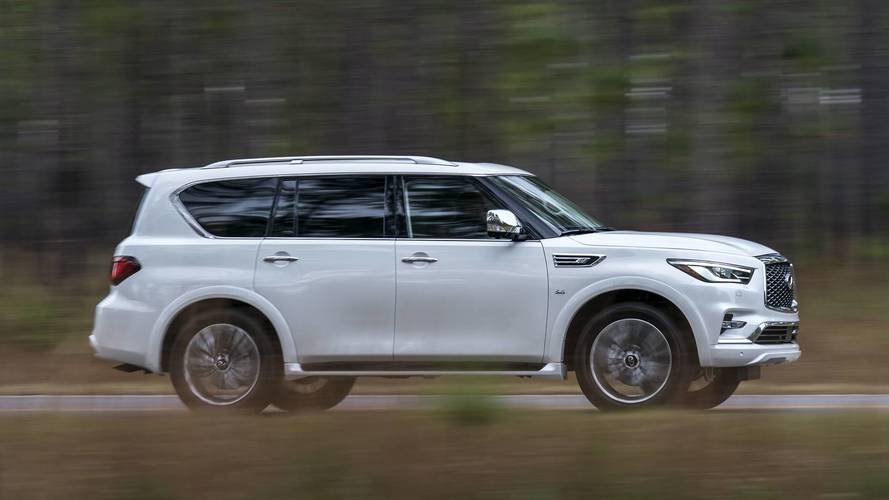 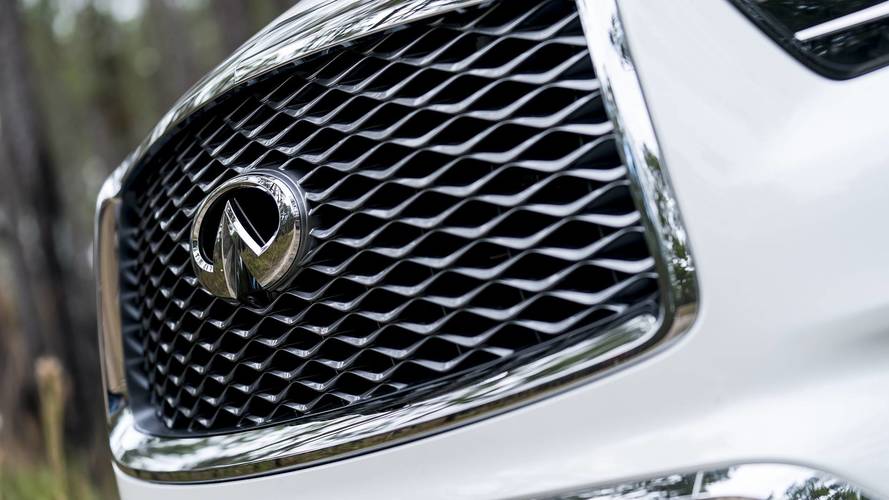 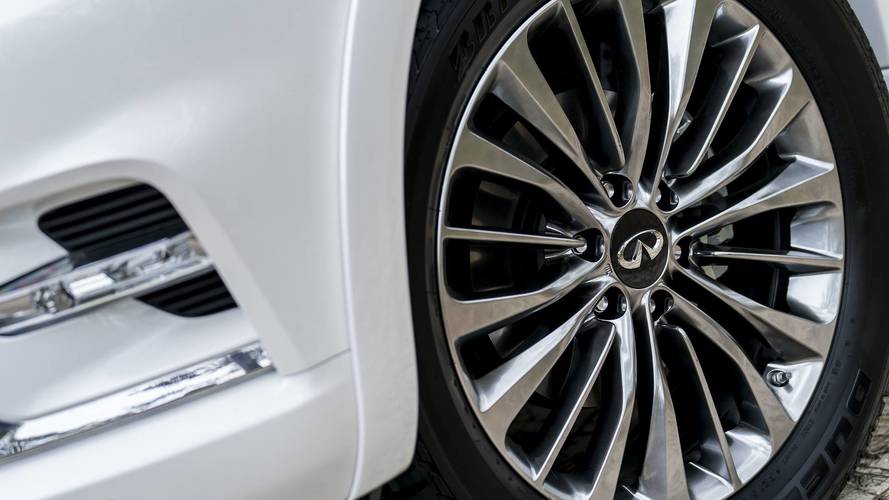 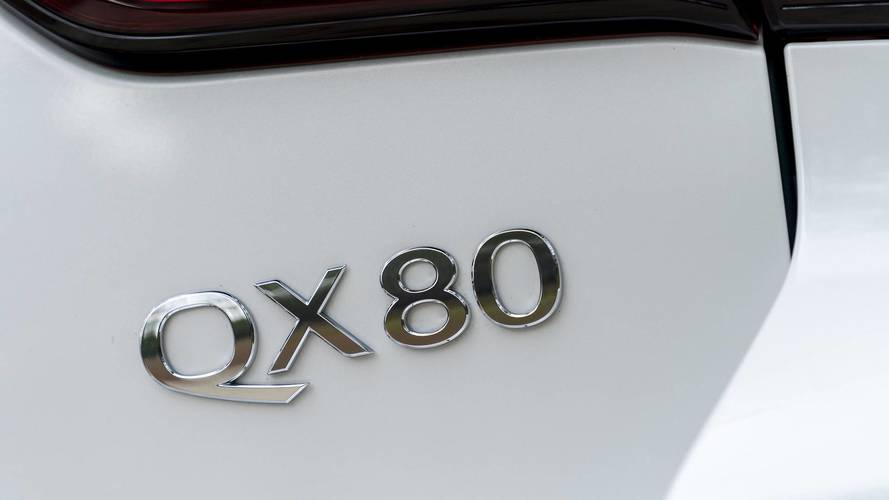 The suspension dampers were retuned for improved comfort, while a re-engineered tire sidewall is also there to soften the ride.

Moving inside, well, it looks just like the cabin of the last Infiniti QX80 I drove. While the material choices are top-notch, especially the optional Saddle Brown diamond-stitched leather door panels, most of the switchgear and gauges feel pretty ho-hum, bearing more in common with cars like the Nissan Murano than true luxury rivals.

This year, there’s a higher-resolution touchscreen (shared with QX30 and QX60), extra sound-deadening materials throughout, new cupholders that can better accommodate mugs with handles, and larger screens (eight- instead of seven-inches) for the rear-seat entertainment system. There are two new USB ports for second-row passengers, and they pump out a welcome 2.4 amps of tablet-charging power. A “smart” video camera-based rear-mirror can either show a normal mirrored view out back or a wide-angle video feed from a camera; this tech is also offered by Cadillac and Nissan. And if you’ve got an Amazon Alexa device, you can now use it to remotely lock, unlock, or start your QX80.

In other respects, though, the QX80 feels behind the tech curve. You won’t find Apple CarPlay or Android Auto, wireless phone charging, or a head-up display, and the low-res monochrome trip computer shows precious little information – it doesn’t even have a digital speedometer or supplementary navigation/audio info.

The only significant mechanical changes are intended to improve ride quality. Anand Patel, senior manager for Infiniti Product Management and Planning, says the suspension dampers were retuned for improved comfort, while a re-engineered tire sidewall is also there to soften the ride. Meanwhile the 5.6-liter V8 and seven-speed automatic transmission are unchanged, with the former cranking out a competitive 400 horsepower and 413 pound-feet of torque, enough to tow 8,500 pounds. 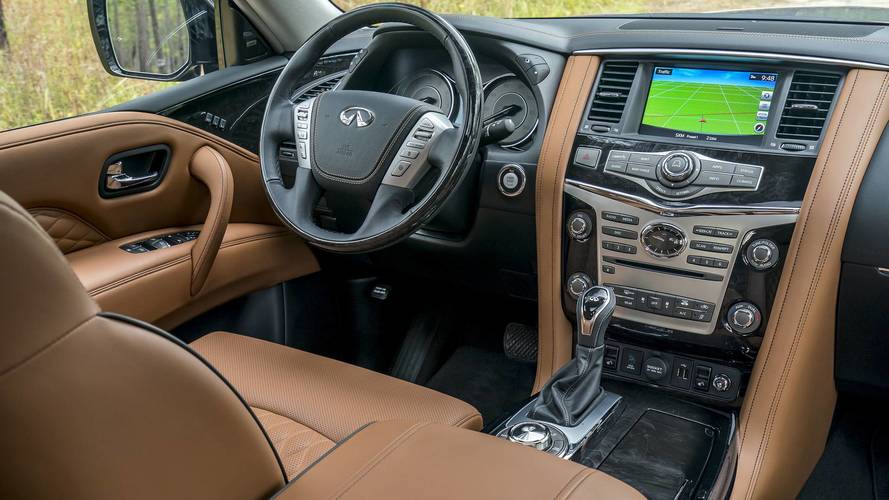 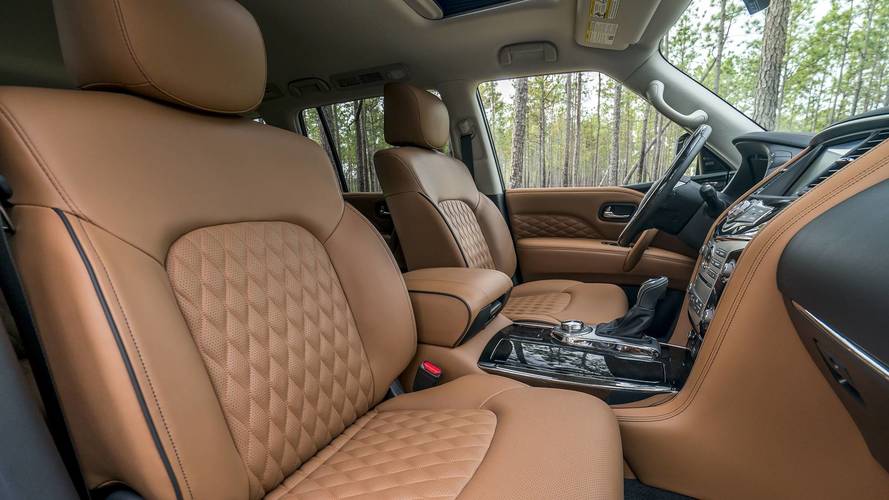 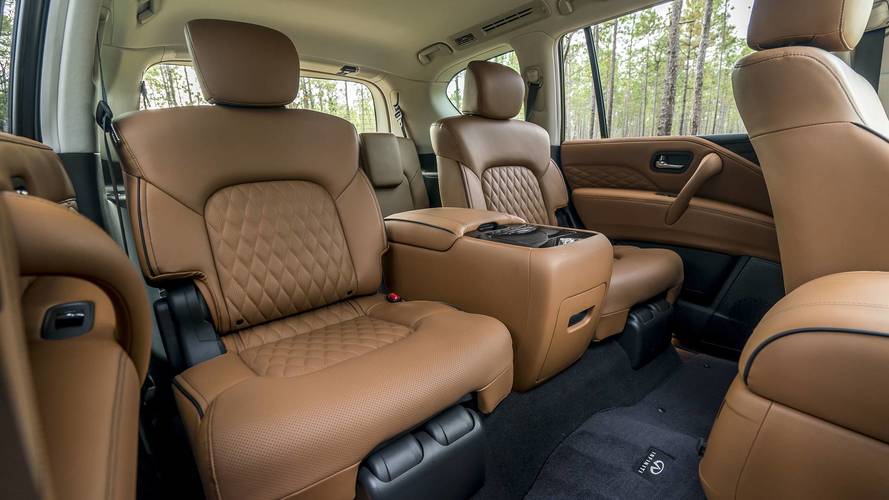 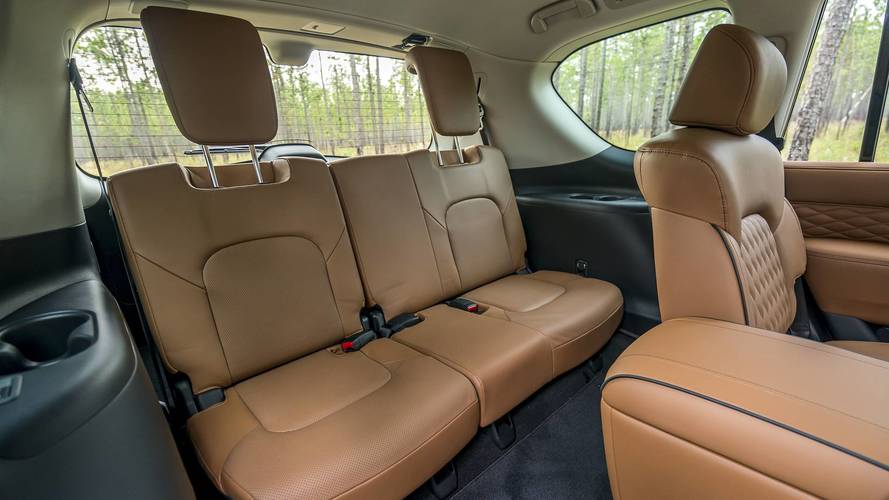 While the material choices are top-notch, especially the optional Saddle Brown diamond-stitched leather door panels, most of the switchgear and gauges feel pretty ho-hum.

From behind the wheel, this new QX80 feels just like the last one. The V8 is strong and snarly, its automatic transmission plenty slick in the city but dimwitted when asked to hustle. For the most part, the entire powertrain fades into the background. Ponderous steering is noticeable all the time, however, making the big Infiniti feel even longer than it is. And despite the efforts to calm the ride, the body still quivers and shivers over bumps in a way most modern body-on-frame SUVs have excised, so the suspension feels nervous at all times. At least the optional hydraulic anti-roll system, equipped on my test car, helps to somewhat reduce wallowing through bends.

The second row of seats is hugely spacious in terms of both head- and legroom, with either a three-across bench or captain’s chairs available. Those seats fold and slide forward at the pull of a lever, allowing ingres to the third row. There’s enough space that I can sit upright without hitting my head, but the super-low seat cushion puts me in a knees-up stance I wouldn’t want to keep for too long. Fortunately, a power-recline function is available for the third row to somewhat ease comfort.

Behind that, you’ll find the cargo area has an unfortunately high liftover height. At 16.6 cubic feet with the back seats up, it’s a tad roomier than a Cadillac Escalade/GMC Yukon Denali, but a bit less than in a Lincoln Navigator. The long-wheelbase Escalade ESV/Yukon XL and Navigator L, however, pack way more storage space. 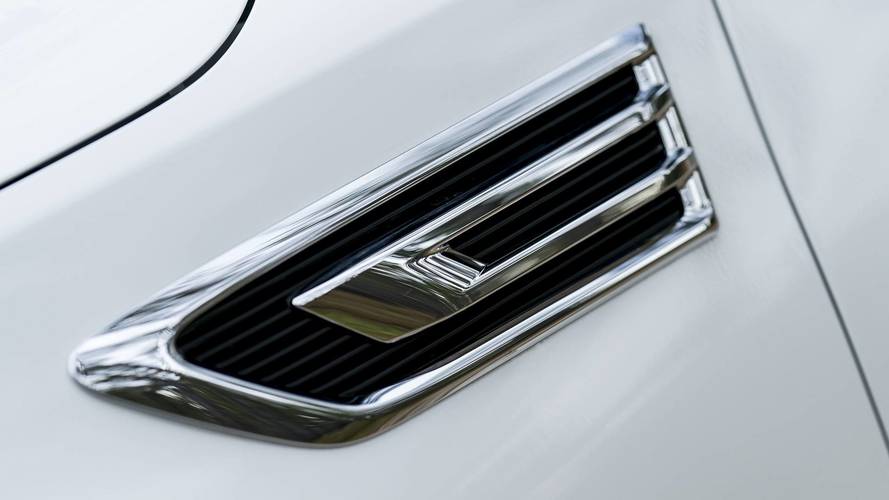 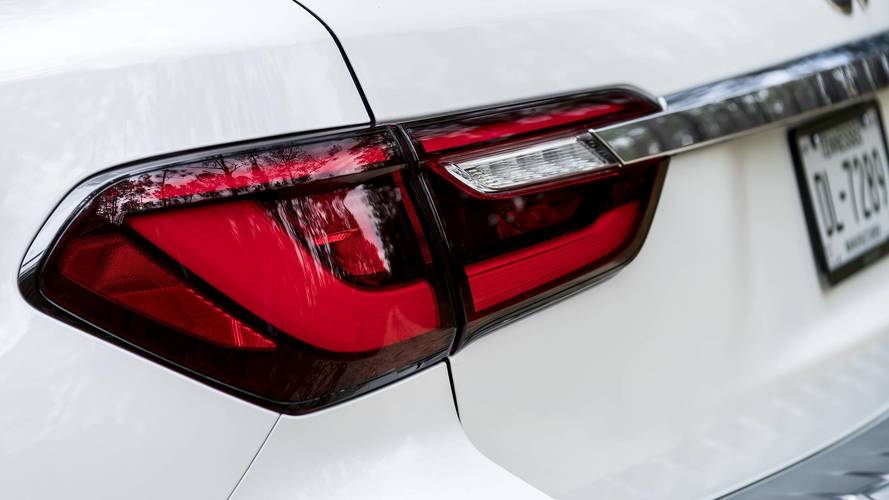 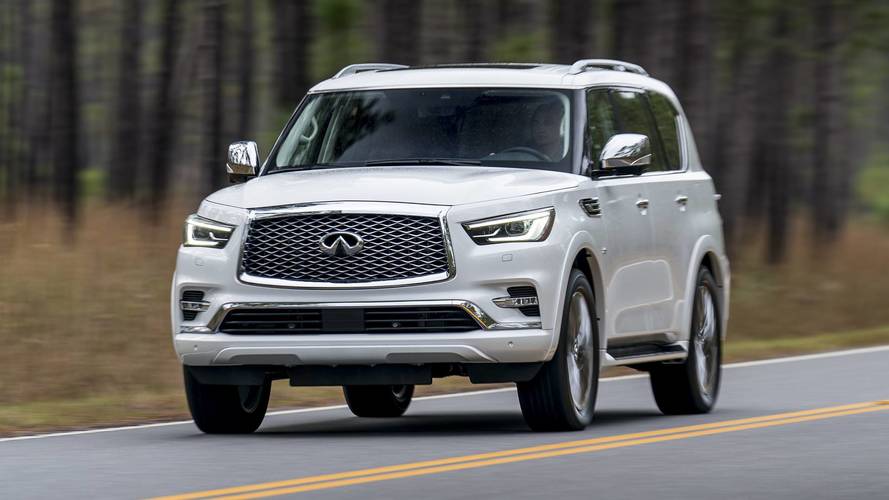 What’s disappointing about the QX80 is that seven years into its life, there are few meaningful advancements.

Fuel economy hasn’t improved at all this year, partly because you won’t find modern features like cylinder deactivation or engine stop-start. That means pretty unimpressive EPA ratings of 14 miles per gallon city and 20 mpg highway for rear-drive models, and 13/19 with four-wheel drive – on premium gas, no less. When pressed that rivals offer better economy figures, Patel simply says anyone who can afford a QX80 can stomach the gas bills: “Fuel economy for this household income is not a huge impact.”

What’s disappointing about the QX80 is that seven years into its life, there are few meaningful advancements. It’s heavier than before, fuel economy and power are unchanged, and the list of in-car technologies still lags behind the competition. In a vacuum, yes, it’s a nice enough SUV with lots of style, a quiet cabin, and a decent list of available features. But while all its competitors have been updated and are thoroughly modern, the Infiniti QX80 seems to transport you a few years back in time.