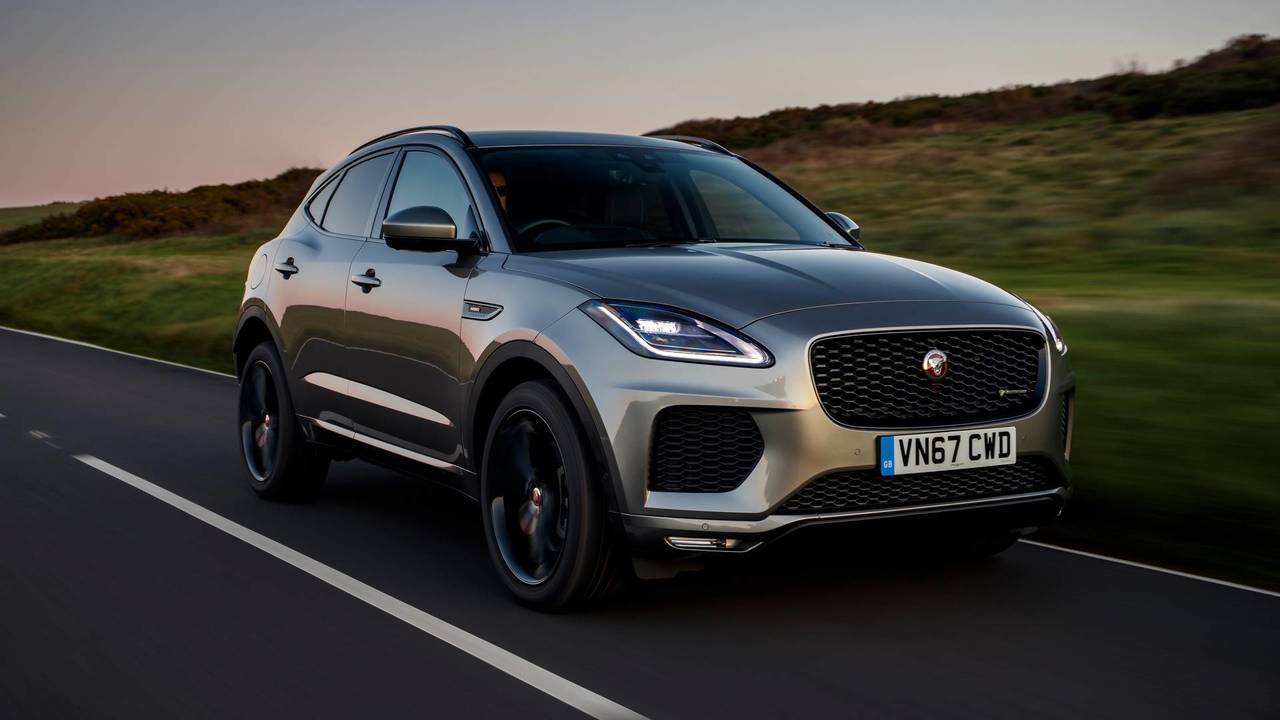 Editor’s Note: Our colleagues at Motor1-UK got the first crack at Jaguar’s entry-level E-Pace, so this review is of a Euro-spec car. We’ll have a full test of the U.S.-spec version as soon as we can.

The Jaguar E-Pace is the British car maker’s second SUV, joining the hugely successful F-Pace. This is the large SUV that, in just one year of production, has already been crowned the 2017 World Car of the Year and become Jaguar’s best-selling model. The desire for Jaguar to create another smaller, more affordable SUV therefore seems to be as logical as it is exciting.

Sadly, E-Pace doesn’t mean electric – that’s reserved for the forthcoming I-Pace SUV – it just means smaller than F-Pace. Instead, this baby SUV will be available with four-cylinder gasoline and diesel engines as well as the choice of front- or all-wheel drive, although only the entry-level 148-horsepower diesel can be ordered with front-wheel drive, outside of the United States.

Given that popularity and consumer confidence around the ‘d’ word is dropping (the diesel engine won't even be offered in the U.S.), we’ve focused here on testing the petrol-powered E-Pace P300 R-Dynamic HSE with 296 hp, all-wheel drive, and a nine-speed automatic transmission. Jaguar describes it as being as close to building a hot hatch as the company will ever get.

This may only be the second Jaguar SUV in history, but it offers a sharp, confident design that borrows the very best design cues from the F-Type sports car.

In the metal, pictured here in Silicon Silver, the Jaguar E-Pace is similar in size to the Audi Q3 and forthcoming Volvo XC40: dinky yet perfectly formed. This may only be the second Jaguar SUV in history, but it offers a sharp, confident design that borrows the very best design cues from the F-Type sports car. Most noticeable are the large headlights and muscular rear shoulders that are pure F-Type, while interior elements such as the exaggerated rake of the dashboard, the passenger grab handle, and pistol-style drive selector help deliver a much sportier vibe than you get in rivals like the BMW X1 and Mercedes-Benz GLA.

Those striking proportions do take priority over passenger space, with access into the rear seats impeded by both the sloping roofline and large wheel arch cutaways that accommodate a maximum (and huge) 20-inch alloy. Storage space up front is good, with a center console that houses multiple USB charging points and can carry two one-liter bottles of water, although the passenger footwell is noticeably tight on wriggle room. Jaguar claims the cargo area offers 20.4 cubic feet of space with the rear seats upright, which sounds bigger than the space looks, so we’d advise bringing along your push-chair or golf clubs to your test drive, just to check your life fits.

The E-Pace is based on the same platform as the Land Rover Range Rover Evoque but it features substantial revisions that help give it a stronger road bias, plus further updates that will be filtered into the second generation Evoque.

Jaguar hasn’t been afraid to inject a bit of playfulness into its baby SUV, either. Not only can you specify an optional wristband called the ‘Activity Key’ to open your car, visible in the lower windscreen and illuminated in the puddle lights is a scene that could have been grafted straight from The Jungle Book: a Jaguar in stealth mode, being followed by its younger cub.

The driving position is low-set and sporty in feel, visibility is good, while the steering is accurate and modestly weighted. It all feels very predictable and assured.

The fundamentals are as predictable as they are appealing. The driving position is low-set and sporty in feel, visibility is good, while the steering is accurate and modestly weighted. It all feels very predictable and assured. This being a Jaguar, the E-Pace doesn’t have to jump through as many off-roading hoops as the Range Rover Evoque, either, so the front end feels noticeably pointier and the Pirelli P-Zero tires grippy in damp conditions. So far, so Jaguar.

The 2.0-liter gasoline engine is less convincing. This may be the same unit that is used in the F-Type Coupe, but while the power is delivered in a smooth, linear fashion, in this application it’s noticeably less tuneful and doesn’t feel anywhere near as quick as the figures suggest.

Confusingly, there are two all-wheel-drive systems available on different versions of the E-Pace: there’s a more benign Haldex-based ‘Standard’ driveline, or the ‘Active’ driveline as fitted to this P300 AWD tester. When cruising at steady speeds, this drivetrain is able to shift all drive to the front wheels to save fuel, but during more spirited drives, it can send 50 percent of the engine’s torque to the rear wheels. Despite this and the optional Configurable Dynamics Pack that allows you to personalize the steering weight, throttle response, and gearshift speed, the E-Pace never feels particularly exciting to drive.

The one overarching factor severely blunting your enjoyment and this car’s sporting intentions is weight. Despite such compact dimensions, the E-Pace is unfathomably heavy. Jaguar usually extols the virtues of an aluminum chassis, and while that may be the case for the F-Pace, the E-Pace’s core structure is made from super-strong boron steel with only the hood, tailgate, roof, and wings formed from aluminum.

Fluid in the corners the E-Pace may try to be, but you cannot disguise that weight under braking, acceleration, the brittle ride quality, or in the suicidal fuel gauge.

Jaguar bosses say a steel structure has helped improve interior packaging while making the E-Pace almost as stiff as the F-Type sports car. While that may be true, it also makes this baby SUV weigh nearly two tons. That’s heavier than its bigger sibling, the F-Pace. Fluid in the corners the E-Pace may try to be, but you cannot disguise that weight under braking, acceleration, the brittle ride quality, or in the suicidal fuel gauge.

Cutting costs may be another reason for the choice of material change, but then this E-Pace doesn’t seem to offer good value, either. Sure, pricing starts at £28,500 for the entry-level diesel/manual that nobody will buy – in the States, it’s $38,600 for the base 2.0-liter gas engine with all-wheel drive. But even the 238-hp 2.0-liter petrol E-Pace (the cheapest gas engine, currently), which may well be the sweet spot in the range, is £40k if you want leather and those smart LED running lights; that'll get you the equally precise-feeling Audi Q5 2.0 TFSI or the swanky and desirable Volvo XC60 T5 R-Design, both of which are from the class above and therefore much bigger, more practical cars. You'll need to part with £50k for a version that resembles the E-Pace P300 R-Design in these pictures. The loaded First Edition model in the U.S., which doesn’t get the 296-hp engine, starts at a lofty $53,550.

Add items such as the panoramic roof, the adaptive dampers, even that wristband that thinks it’s a key, and you could easily see your E-Pace priced nearer £60k. Sorry, Jaguar, but even the bigger, faster, and dynamically more competent Porsche Macan S can limbo under the £50k barrier.

For all its presence, prettiness, and on-paper potential, the Jaguar E-Pace pushes style over substance, squeezing affordability, practicality, and mechanical refinement into the corner more than it should for this class of vehicle. While it may be a cool-looking, left-field choice, there are rivals that offer more space, performance, and better infotainment for similar money. Making a baby Jaguar SUV is a no-brainer. Making a Porsche Macan-beater is clearly a lot tougher.