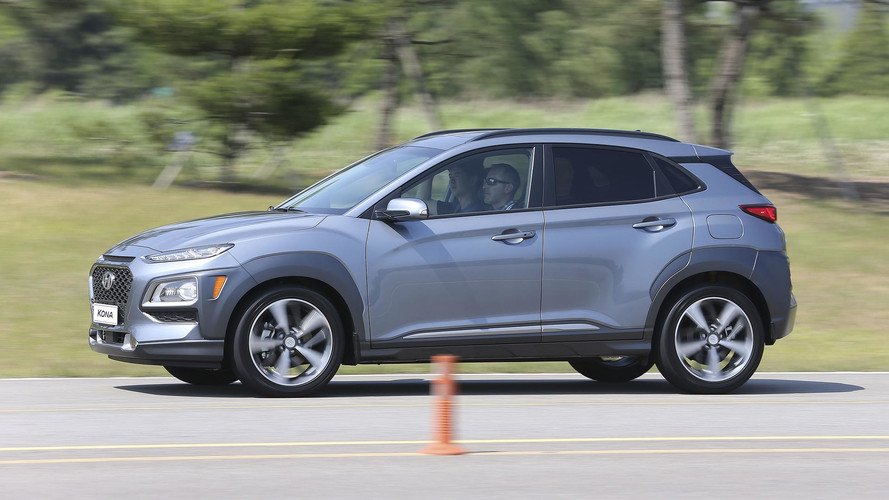 Solid. That’s the first word that comes to mind following a short drive in Hyundai’s recently revealed 2018 Kona. And I do mean short – onsite at Hyundai’s research and development center in Namyang, South Korea, I’m only allowed about 10 minutes behind the wheel of the new subcompact crossover. But while my impressions of the Kona are limited, what I can say with assurance that this new Hyundai appears to have a ton of potential.

The U.S.-spec Kona will be revealed at the 2017 Los Angeles Auto Show this November, and sales are expected to start shortly thereafter in early 2018. When it arrives, U.S. customers will have a choice of two engines. Base SE and SEL models will come with a naturally aspirated 2.0-liter inline-four, with 147 horsepower, 132 pound-feet of torque, and a six-speed automatic transmission. But here in Namyang, I’m driving a Kona fitted with the upgraded 1.6-liter turbocharged engine, good for 175 hp and 195 lb-ft of torque, paired with a seven-speed dual-clutch gearbox. This powerplant will only be offered on higher-grade Limited and Ultimate trims.

The chassis is firm without being too stiff or crashy, the 18-inch wheels of this test car soaking up pavement imperfections with aplomb.

Taking off from a stop on a closed course inside Hyundai’s R&D facility, the turbo engine is smooth and powerful, and very refined. Peak torque from the 1.6-liter mill comes on at just 1,500 rpm and stays strong up through 4,500 rpm. The seven-speed transmission smoothly shifts at predictable points, and even when dialing up the Kona’s Sport mode – the only other setting aside from Comfort – the transmission doesn’t suddenly become an overly aggressive partner for this torquey engine.

Hyundai expects 35 to 40 percent of U.S. buyers will opt for the turbo. And while it’s one of the more powerful motors in the subcompact class, Hyundai officials say it’s likely to have “better than average” fuel economy. Elsewhere in the world, the Kona will be sold with a 1.0-liter gasoline three-cylinder engine, as well as a 1.6-liter diesel inline-four, but don’t hold your breath for either of those to come Stateside. Similarly, don’t look for a higher-output version from Hyundai’s newly launched N brand, either. The next big powertrain upgrade for Kona will involve electrification.

The Kona’s solidity is felt on a short drive of the automaker’s handling course, with varying road surfaces and long stretches of crowned pavement. The steering has a light action that offers appropriate feedback – nothing groundbreaking, but above average for the small CUV set. Similarly, the chassis is firm without being too stiff or crashy, the 18-inch wheels of this test car soaking up pavement imperfections with aplomb. I’ll obviously need to get the Kona out on the road for longer periods of time before making a final assessment, but this initial drive reveals a crossover that’s surefooted. Remembering recent drives in vehicles like the Jeep Renegade, Nissan Juke, and Toyota C-HR, I’m prepared to say the Kona's road manners are superior.

Hyundai says the Kona boasts more headroom and overall interior space than any of its subcompact competitors.

Front-wheel drive is standard across the board, and all-wheel drive will be optional on all trims, regardless of engine. Hyundai says the AWD system defaults to front-drive most of the time unless slip is detected, though drivers can manually put the Kona into a sort of “AWD lock” mode, where power is continuously sent to all four wheels. The U.S. will be one of the Kona’s most important markets, and in order for it to have nationwide success, Hyundai knows it needs to offer a capable all-wheel-drive system.

Hyundai will release pricing details closer to the crossover’s launch, but product planners tell me it will be “in line with [the Kona’s] competitors,” and less expensive than the $22,500 starting price of Toyota’s C-HR. A base MSRP right around $20,000 seems like a safe bet, and every Kona will come standard with features like a seven-inch touchscreen infotainment system, Apple CarPlay and Android Auto connectivity, Bluetooth, and more. SE models ride on 16-inch wheels, while the SEL gets 17s, in addition to niceties like pushbutton start, roof rails, an optional automatic emergency braking. Stepping up to the Limited trim gets you the 18-inch wheels seen here, leather seats, a sunroof, and LED headlights and taillights. Finally, the top-end Ultimate will have factory navigation, wireless smartphone charging, rain-sensing wipers, an Infinity high-end audio system, and much more.

Getting situated behind the wheel, the first thing I notice is how premium the Kona feels. The leather seats are comfortable. There’s ample shoulder- and headroom. The cabin layout is logical, with a simple yet contemporary design that’s likely to age well. Every button and control is exactly where I expect it to be. Again, I’ll need more time inside the Kona to really find its merits and faults, but this short preview shows me a vehicle that’s roomy and quiet, and very nicely appointed. I don’t yet have final specs, but Hyundai says the Kona boasts more headroom and overall interior space than any of its subcompact competitors. Sure, I’ll need to compare the soon-to-be-released spec sheet against the Kona’s competitors before signing off on that claim, but from the driver’s seat, I’m enjoying an open, airy cabin, with tons of space.

One part of the Kona I’m not sold on is its appearance. Yes, oddball designs seem to work with small SUVs these days – Jeep can barely build enough Cherokees to keep up with demand, after all. But as a late entry to the segment, the Kona is less of a bold statement and more a hodgepodge of other daring designs. The slim LED slats up front remind me of the Cherokee, or even the Citroen C4 Cactus. The short C-pillar and rear three-quarter view reminds me of the Mazda CX-3. And everyone is doing the floating roof thing these days. I will say, the Kona looks much nicer in person, not to mention outside a showroom and in natural light. Its presence is largely dependent on color, too – I actually rather like it in the gray pictured here.

Still, a unique appearance is what it’ll take for the Kona to get noticed in the highly competitive subcompact CUV class. And up against strong competitors like the Honda HR-V and Kia Soul, the Kona will need to deliver with lots of functionality, good fuel efficiency, and well-sorted road manners. Thankfully, Hyundai seems to have a very well-rounded, cohesive package on its hands.