Often overshadowed by its classmates, Kia’s five-door Forte is nevertheless a star student.

There’s no shortage of great cars in the compact hatchback class these days. The Honda Civic is seriously impressive. The Mazda3 is incredibly fun to drive. Subaru’s Impreza has a fresh face and standard all-wheel drive.

That in mind, it’s easy to overlook cars like the Kia Forte5. Despite its recent refresh in early 2016, the five-door Forte has never really been a standout player in the class. But after a drive in the turbocharged SX model, I think this little guy deserves its turn in the spotlight. It’s really quite good.

Great engine. While other Forte5 models use naturally aspirated four-cylinder engines, the SX trim gets a punchy turbo-four, with 201 horsepower and 195 pound-feet of torque. That actually makes it the most powerful car amongst its competitive set, putting it closer to Honda Civic Si or Hyundai Elantra Sport territory. It’s not the most fuel-efficient option in the segment, only getting 29 miles per gallon highway with the manual transmission, but...

It’s pretty fun to drive. Don’t get me wrong, you won’t be going GTI hunting in your Forte5 SX, but the Kia moves with decidedly more verve than many of its competitors. The chassis doesn’t punish you for throwing the car into a bend, and the steering is light and direct in action, though it could use a touch more feedback. Even the six-speed manual gearbox is a delight, with precise action of the gearbox and a nicely weighted clutch.

Everything you want at a price you’ll like. The Forte5 does not lack for features, especially in the high-zoot SX trim with its optional Premium Tech package. For $28,000 you get a car with HID headlights; heated, cooled, power front seats; a full infotainment suite with navigation, Apple CarPlay, Android Auto, and voice control; tons of safety tech; and let’s not forget, Kia’s outstanding 10-year, 100,000-mile warranty. Other competitors offer the same equipment at similar price points, sure, but none of them are as powerful or as spacious as the Kia.

Yes, spacious. Fold the rear seats flat, and you’ve got 56.4 cubic feet of storage space. That makes the Forte5 more accommodating than any of the competitors listed below. 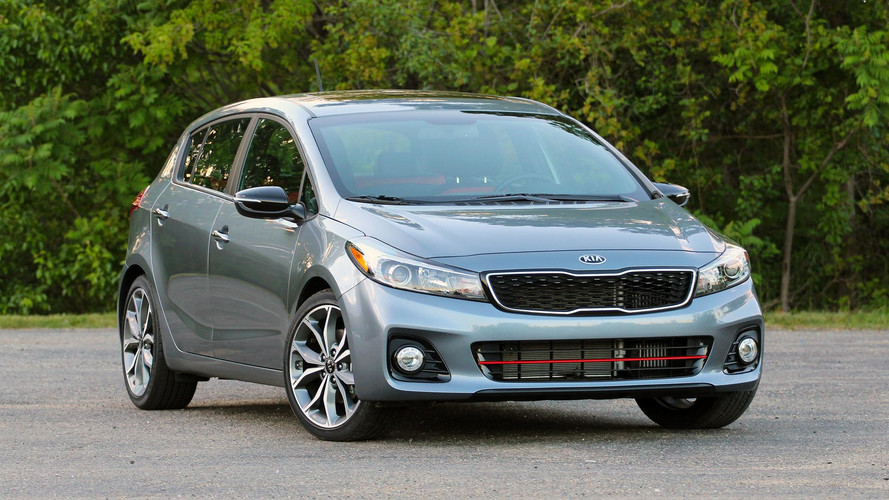 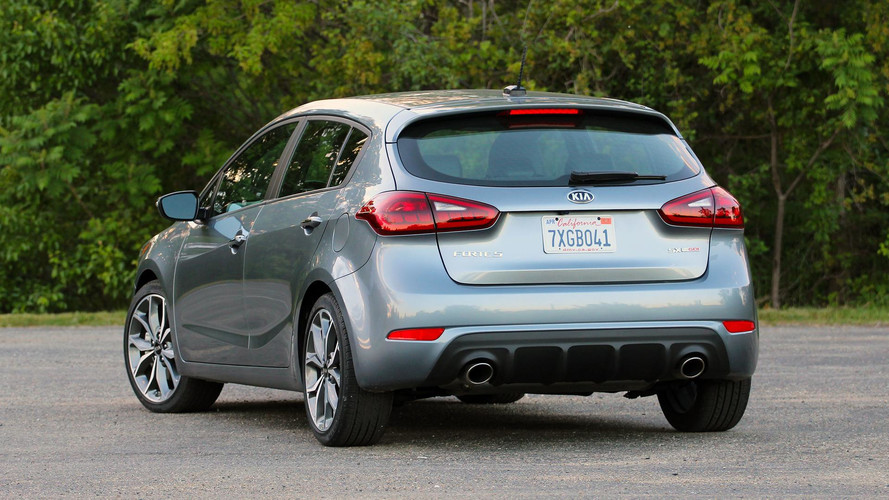 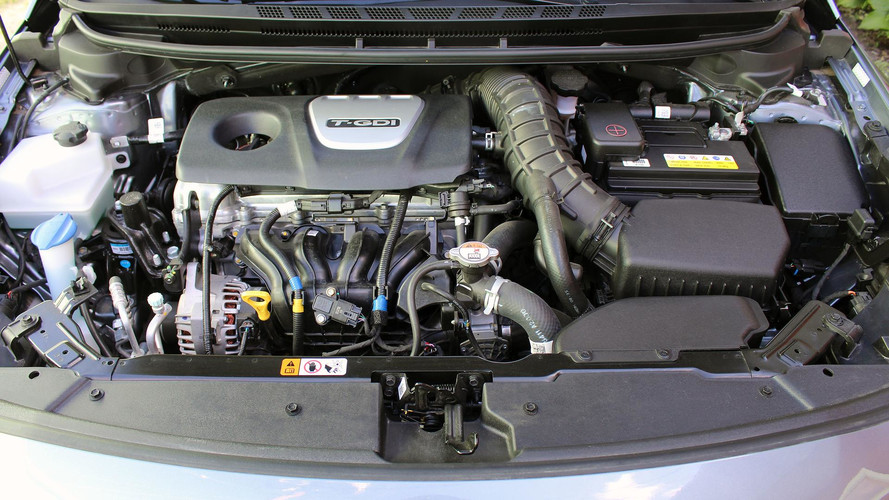 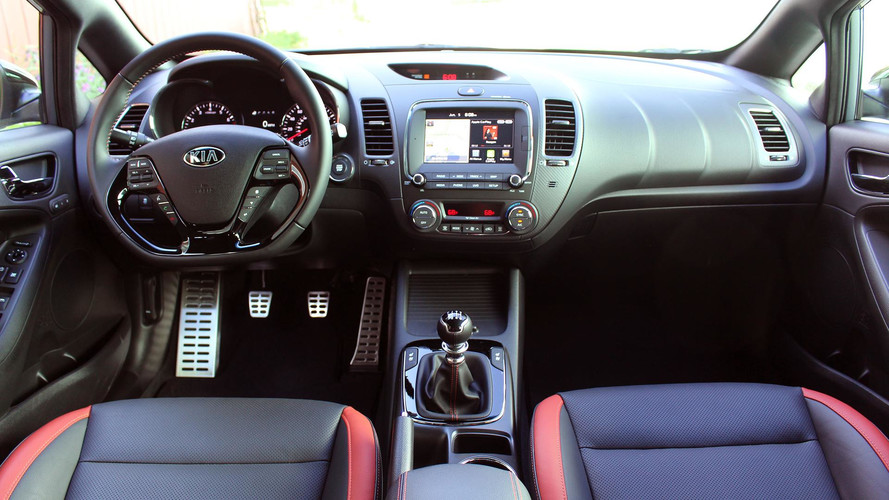 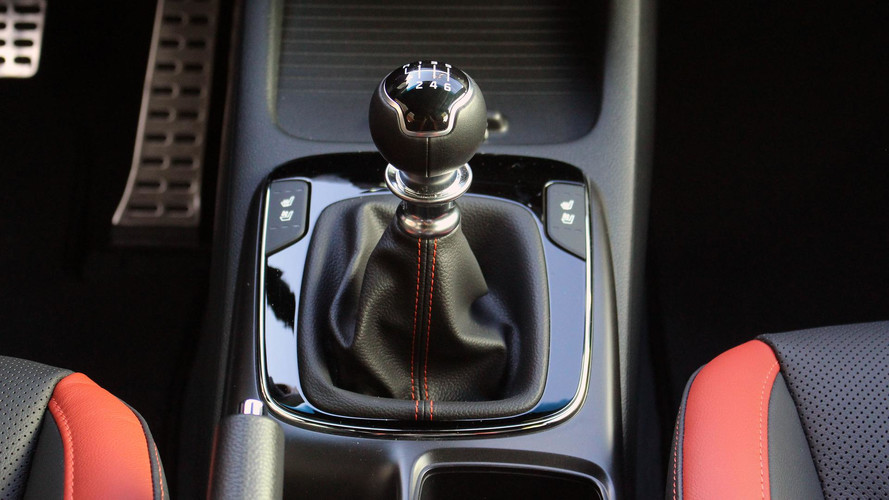 Anonymous styling. Park the Forte5 next to pretty much any of its competitors, and not even this sportiest SX version will stand out. It’s not a bad-looking car, sure, but it’s hardly what I’d call pretty. Some more emotional styling – especially from a design-conscious brand like Kia – could go a long way to improving the Forte5’s recognition. Oh, and let’s kill that red accent stripe in the lower grille, too.

Bland interior. While I like the layout of the Forte’s cabin, the material quality leaves a lot to be desired. The storage bin ahead of the gear shifter is covered with a truly horrible piece of plastic, and a lot of the door and dash panels look and feel like a step behind everything else in the class. There are also, like, four different shades of gray happening in here. Except on the seats, though orange-accented chairs do not a premium interior make.

Poor fuel economy. Here’s where you pay the penalty for all that extra power. This Forte5 SX with a manual transmission is rated at 23 miles per gallon city and 29 mpg highway. Even the automatic version isn’t much better, at 25/30 mpg. Alongside the 40-mpg Honda Civic and 36-mpg Mazda3 hatchbacks, that’s pretty poor.