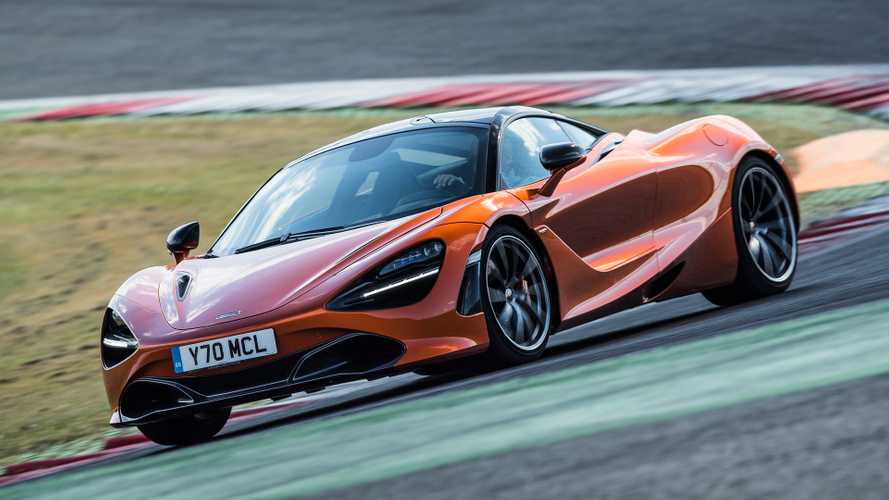 We test the newest member of the Super Series where the very idea of a supercar was born.

As a 39-year-old married guy, I’m not exactly eye-candy for your typical (which is to say, gorgeous) Italian woman. As such, being the center of the undivided attention of a group of teenage girls – pointing, smiling, yelling, at me and each other all at once, in a way that I’ve only ever seen here in Italy – wasn’t what I’d call comfortable. Yes, I knew it was the car they cared about, and not the dope Modest Mouse tee I was rocking, or the particular way my beard shimmers when I’m a little sweaty… but still.

The McLaren 720S is a car that will get you noticed. You, dear reader, might have surmised as much by simply looking at pictures of the supercar. For me it took an awkwardly halting trip through a tiny village, over a Roman-laid road almost exactly as wide as two Fiat 500s parked mirror-to-mirror.

The British car company has made startling progress since its first offering, then called the MP4-12C, was launched six years ago. But nothing to date looks the Supercar of the Future like this 720. Something between an alien landing craft and an interpretive vision of sex wrought in carbon fiber and aluminum can be seen in this mantis-eyed machine – low, wide, sleek, complex, and almost completely unexpected, depending upon which angle you’re pointing your Nikon’s lens. (Or, in the case of the teenagers, a perfect selfie background.)

Of course the real progress I found was on the pavement: that found in the countryside after leaving the piazza of my short-lived celebrity, and on the clean line around the Vallelunga circuit. All pointing at a 720S that is, quite possibly, the best McLaren to wear the badge, ever.

Helping to back that claim is the new, biturbocharged, 4.0-liter V8 engine that enlivens this impressive machine. The mid-mounted powerplant is impossible to ignore when driving at pace, even without the optional sports exhaust. From in the cabin, the array of sucking, whistling, and booming sounds coalesce into something greater than their sum. Imagine a GT-R tuned by Joe Strummer and then sent to finishing school, and you start to get the idea (along with a hilarious sitcom premise). Bellicose, riotous, charming, and difficult to get enough of once you’ve gotten your first taste.

There’s not exactly a “dead spot” at lower revs, so much as the car is transformed from “very fast” to “holy shit, slow down” as you crest 5,000 rpm.

Oh, and it makes the 720S ungodly fast, too. The engine is good for 710 horsepower at 7,500 rpm, and 568 pound-feet at 5,500. Those lofty engine speeds tell the tale of the acceleration experience fairly well. There’s not exactly a “dead spot” at lower revs, so much as the car is transformed from “very fast” to “holy shit, slow down” as you crest 5,000 rpm. Said another way, the McLaren-estimated 0-62-miles-per-hour time of 2.9 seconds is far less impressive than the feeling of charging from 50 to 120 mph. I wasn’t even 100-percent sure where my “gob” was until the 720S smacked the hell out of it on my first pull to triple-digit speeds.

Power isn’t half so impressive without lightness and control, of course. This being McLaren – a car company created to support a bad race car habit – both are impressively apparent when I started hot-lapping the car at the Vallelunga circuit.

The 720S is the lightest-ever inhabitant of McLaren’s Super Series – a spot previously occupied by the 650S. Mass has been pared back in part by way of the company’s new carbon-fiber central structure, dubbed Monocage II. The CF tub extends up and over the driver’s head in a single (and rather lovely) upper support, allowing the total machine to be stiffer and more responsive than ever, while also cutting valuable kilos. The total weight of the car is down to 3,128 pounds, which should undercuts the operational weight of the 650S Coupe.

On track the power and lightness come together on the exit of a fast corner like Adam and Eve. Even on my tentative first laps around Vallelunga (which offers two very high-speed sections connected by a few miles of tighter curves) an inherent balance is evident. The 720S really wants you to find that fast line through each corner, allowing me to make minor corrections even under a cornering load without histrionics.

The 720S really wants you to find that fast line through each corner, allowing me to make minor corrections even under a cornering load without histrionics.

Part of what I’m feeling is actually elegant software design. The car uses the latest generation of McLaren’s Proactive Chassis Control, which, generally speaking, works millions of near-instant calculations to keep my contact patch as happy as possible. The 720S has 12 more sensors in the chassis, as well as an accelerometer at each wheel, to provide the system with immense amounts of data. In the Track setting I use at Vallelunga, this means almost zero noticeable intrusion from the electronic stability control.

The newly debuting Variable Drift Control takes that software to another level, by allowing every driver to custom tune the amount of ESC intervention they’d like. It’s a lovely, safe way to learn to be fast, as opposed to the traditional “turn everything off and hope you don’t hit the wall” strategy. What’s more, there are in-car telematics (including a three-camera system) that allow you to track your progress at your favorite test circuit. My laps were easily compared to those set down a few days before by company test drivers – a hilarious and roundabout way for McLaren to remind me that I’m slow, and the 720S is fast.

Now, in all probability, most McLaren drivers won’t avail themselves of these racing/training aids, most of the time. But it speaks to the company’s motorsport DNA that the systems exist at all (and that they work so well).

What many 720S drivers will engage in, I hope, is the kind of back-roads bombing that was my lucky privilege between Rome and the racetrack. The country roads that wrinkle away from the Eternal City are just the right combination of curvy and unpatrolled to make a playground for a car like this. (Plus, as evidenced by the ragazze in the village, the locals like seeing it storm by.) And the drive route helped to emphasize that, even below track speeds, the 720 is still elegant to steer, and surprisingly livable.

In what’s becoming my favorite of McLaren traditions, the electro-hydraulic steering system was a joy to use. The experience hits all of my predilections just right: the wheel is just the right diameter, covered in grippy Alcantara (though that’s optional), and otherwise completely unadorned. You want to change the radio station? Reach down to the center stack; a gentleman uses his steering wheel for steering. The rack is so quick and direct, with feedback from the road so full, that I needed about five minutes in the pilot’s chair to feel fully plugged in.

Having the little stuff work so well, on a car that will also go 212 mph, is impressive on a wholly other level.

Despite the spartan wheel, the car has most features you’d associate with a luxury car, too. The newest version of McLaren’s infotainment system is straightforward. A vertically oriented touchscreen exhibits more lag then some mass market equipment, but I still found myself touching, pinching, zooming, etc. without a ton of hassle, pretty much right away. The central gauge cluster is all digital, configurable, and easy to read – and it tucks itself down revealing a very slim display of just gear, rpm, and speed if you prefer to focus on the road. The navi works well; seats are heated; there’s a helmet on the guy that tells me which HVAC vents I’ve selected; there are covers on the door pockets that keep stuff from falling out when you’re trying to impress the valet (or not look silly doing a driver change with the entire population of the village looking on). Having the little stuff work so well, on a car that will also go 212 mph, is impressive on a wholly other level.

On that same front, McLaren has made the 720S completely painless to drive in the city. Even leaving Rome – not the calmest urban driving environment in the world – I felt confident in this Mac, in part because the visibility is really excellent for this class of car, and in part because the Comfort mode creates suspension and steering settings not unlike an E-Class or 5 Series. With one-finger steering and 360-degree cameras, even a dolt could parallel park the 720 (as long has he didn’t get too hung up on the price of touching up the paint). And the comfort-set ride was hardly even bumpy, to say nothing of back-breaking, even on cobblestone streets.

For you disbelievers, reading this far and waiting for the proverbial other shoe to drop on this tale of genuine excellence… I don’t have much for ya. Here are my quibbles with what McLaren has wrought, such as they are: (1) The 720S is very expensive. At a base price of $284,745, it is effectively unobtainable for most car buyers, no matter how enthusiastic, all over the world. Oh, and it’s nearly sold out already, even though it doesn’t go on sale in America until June. (2) The transmission itself, a seven-speed DCT, works a treat via the paddle shifters, but the central push button operation for drive, neutral, and reverse is fussy. All require a really firm foot on the brake pedal to engage, and don’t quite fit with the easy-going in-city personality I described above. Sunday drivers beware. (3) The seat controls are really fiddly… Seriously though, that’s all I’ve got.

I love the idea that I might be in the background of someone’s opportunistic supercar selfie, my embarrassed glower barely visible through the window, my flop sweat unregistered on an Instagram page I’ll never see. I love it for the contrast between my state of mind and the superlative vehicle encasing me at the time. The McLaren 720S is a star, after all – and even in the country that invented the supercar, in a village that has undoubtedly counted Ferraris and Lamborghinis within its narrow corridors – bright enough to dazzle.