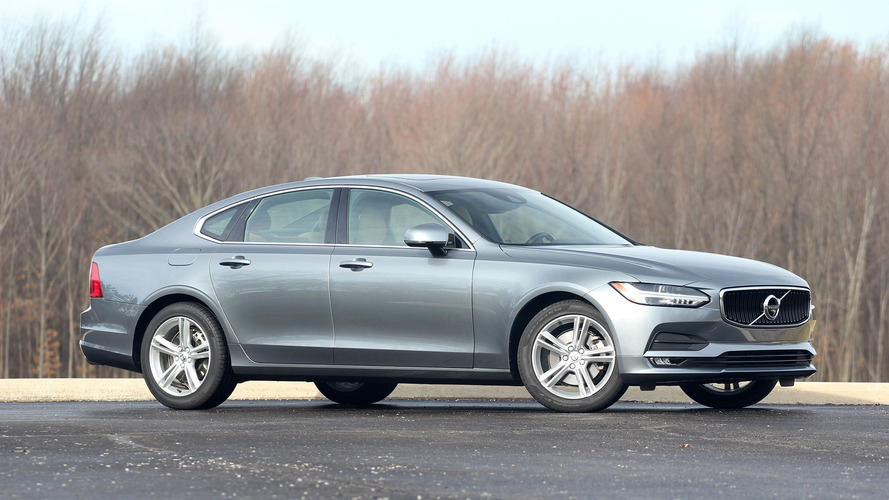 Buying a Volvo used to broadcast that you were a boring person, but not anymore. The brand’s latest creations, like the fullsize XC90 SUV and this, the S90, are some of the slickest machines you can buy. Crisp styling, next-gen tech, and an unrivaled capacity to protect you in a crash, or prevent one entirely, make modern Volvos like the S90 as cutting-edge as the common wares coming out of Germany, Japan, or the United States. If you’re shopping for a midsize luxury sedan and it’s not on your list, you need to grab a pen and fix that.

Drives small. The S90 isn’t light. In fact, the base trim level, front-wheel-drive T5 Momentum model I tested is anywhere from 200-250 pounds heavier than a similarly equipped BMW 5 Series, Mercedes-Benz E-Class, or Audi A6. Despite the poundage, the S90 feels surprisingly light on its feet; it turns in quickly and remains relatively flat while cornering for a luxury sedan. The turbocharged 2.0-liter four-cylinder engine is also surprisingly powerful, especially when it’s let loose in Dynamic mode.

Fresh design. Volvo designers drew the S90 with a light touch, using straight lines, simple curves, and a lack of adornment to create one of the cleanest designs around. It’s contemporary yet timeless; the S90 will look sharp on the certified pre-owned lot a few years from now and well beyond.

Great value. The S90’s starting price is on the low side among midsize luxury sedans. At $46,950, it’s price similarly to the Lexus GS and Cadillac CTS, and $4,000-$5,000 below an equivalent BMW or Mercedes, respectively. Moreover, most luxury cars don’t offer as many premium features as standard equipment. All S90s come with Volvo’s well-regarded Sensus infotainment and navigation system with a nine-inch vertical touchscreen; a comprehensive suite of active safety systems that includes auto-braking, lane-keep assist, and semi-autonomous driving; and niceties like an all-digital gauge display, a power moonroof, and a 330-watt sound system with 10 speakers. It’s a welcome change from, say, BMW, where keyless entry, push-button start, and engine start/stop are part of an optional package on the 5 Series costing $650 – all are standard on the S90.

Torque steer. With only its front wheels moving the car, the S90 can exhibit torque steer under hard acceleration; the steering pulls from side to side when you use lots of the engine’s power. Fortunately, it only arises when you really drop the hammer, especially in Dynamic mode where the S90’s throttle sensitivity is at its highest. Any hint of torque steer could be banished by upgrading to the all-wheel-drive T6 model that also comes with a more powerful engine, but the price goes up by $6,000 and fuel economy goes down.

Leaves analog inputs behind. The S90’s interior doesn’t have a lot of buttons or switches; most had to go to make room for the Sensus system’s nine-inch touchscreen. The entire climate control system, all of the navigation system’s functions, and most of the stereo live within that large glass screen. So does the owner’s manual and every bit of customization this car allows. The only physical inputs that remain are buttons for the hazard lights; the front and rear defrosters; forward track, reverse track, and play/pause for the stereo; and a big volume knob. If you’re not ready go to (nearly) all digital, you should look for a car with a more traditional interior.