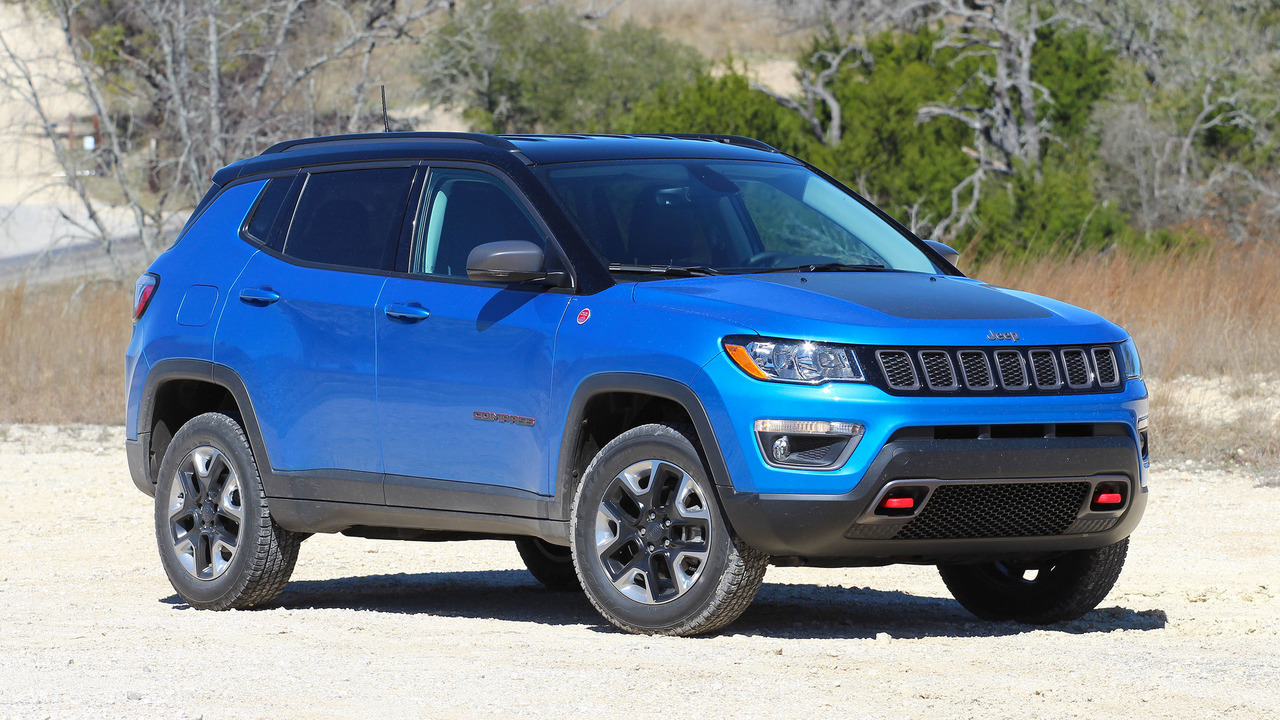 Forget the Wrangler; this is the most important vehicle Jeep will launch this year.

Like it or not, utility vehicles of all sizes dominate in today’s automotive marketplace. Every single automaker is benefitting from this boom. And if you’re Jeep – a brand that only makes utility vehicles – it’s a very good time to be alive.

This redesigned 2017 Compass arrives at the perfect time, then. Fiat-Chrysler executives have told me they consider Jeep to be the company’s flagship brand on a global scale, and the Compass is a crossover that’s poised to do well in markets around the world. My Brazilian counterparts had plenty of good things to say about this crossover after a preliminary test late last year. And following a drive of the U.S.-spec model through Texas Hill Country, I’m convinced the new Compass will have tremendous appeal here in the States.

Jeep’s newest offering serves as the replacement for both the last-generation Compass and its Patriot sibling. I’m not going to waste time beating a dead horse – forget everything you know about its predecessors. The brand-new Compass throws out everything from the old model – a vehicle based on the truly dreadful Dodge Caliber, remember – and starts fresh with new bones and a new attitude.

When penning a new Jeep, lead designer Mark Allen says “we either hang it off the ideals of the Wrangler or Grand Cherokee.” The tiny-tough Renegade, for instance, shares a number of boxy cues with the go-anywhere Wrangler. But one look at this Compass and similarities to the Grand Cherokee are immediately obvious. The smoothed-out lines, integrated wheel arches, and seven squared-off slats in the grille all follow the handsome direction set forth by this generation of Grand Cherokee. It’s pure Jeep: Rugged in nature, but with a strong design statement, it’s more appealing, to my eyes, than both the too-cute Renegade and weirdo Cherokee.

Rugged in nature, but with a strong design statement, it’s more appealing, to my eyes, than both the too-cute Renegade and weirdo Cherokee.

The Compass rides on a stretched version of the Renegade platform, and the two Jeeps share a common powertrain. Despite Jeep offering a total of 17 different engine and transmission configurations around the world, including the 2.0-liter diesel that Motor1 Brazil tested, U.S. cars will only come with FCA’s 2.4-liter Tigershark inline four-cylinder engine, which makes 180 horsepower and 175 pound-feet of torque. Base models come with a six-speed manual transmission, and a choice of either front- or all-wheel drive. You get six forward gears if you want front-wheel drive and an automatic, but if you want all-wheel drive and an auto, like on the Trailhawk model pictured here, a nine-speed automatic is standard.

Unfortunately, the engine and transmission are the real weak spots of the Compass package. FCA has done a lot of work over the years to improve its nine-speed automatic, and while it’s not nearly as dreadful as the first time I tested it in a 2014 Cherokee, it still leaves a lot to be desired in shift quality and programming. This transmission really seems to work better alongside higher-torque engines – it’s fine in the V6-powered Chrysler Pacifica, for example. But with only 175 lb-ft arriving at 3,900 rpm, there’s a dearth of power in the low end of the rev range, and the transmission is geared to upshift as early as possible for efficiency. This makes the Compass a real slowpoke when accelerating from a standstill.

There isn’t a huge fuel economy benefit to balance this anemia, either. At its best, the Compass is expected to return 31 miles per gallon on the highway (in front-driven, manual form); compare that to the 34-mpg Honda CR-V or 35-mpg Mazda CX-5. Combined fuel economy figures for the Compass are either 25 or 26 mpg, depending on the model, but don’t expect to hit those if you’re frequently dipping into the throttle to eke out a bit more power.

That said, once you’re up and moving, the Compass surprises with excellent road manners. The four-wheel independent suspension uses Koni frequency-selective struts, and the result is a balanced, stable ride while cruising or cornering. Even on the 17-inch wheels and higher-sidewall 215/65-series tires of this Trailhawk tester, there’s very little in the way of roll or dive when driving spiritedly. Grab the keys to a Limited on its 235/45 tires and 19-inch wheels, and there’s a shocking amount of grip.

Combined with steering that’s both light and direct in action, the Compass is an enjoyable steer. I’m no longer shocked by a small crossover’s ability to deliver higher-than-average levels of driver involvement – a lot of them are pretty good these days – but I don’t necessarily expect it from a Jeep. The Compass easily bests the Renegade and Cherokee as far as driving dynamics are concerned.

The Cherokee has a more sophisticated four-wheel-drive system, but the Compass Trailhawk still has what it takes to earn Jeep’s all-important Trail-Rated badge. Its Active Drive system has a true low range, with a 20:1 crawl ratio, and the Selec-Terrain functionality allows you to switch between Auto, Snow, Sand, and Mud modes (the Trailhawk gets an additional Rock setting). Driving through Jeep’s off-road course, the Compass handles steep grades and minor rock crawling without issue. I don’t imagine most Trailhawk owners will actually test out its 19-inch water-fording ability, or appreciate that its front fascia is different from other Compass models to enable a 30-degree approach angle. But it’s a Jeep through and through, and for many buyers, knowing they can venture off-road is reason enough to opt for a Trailhawk.

In real-world, daily-life situations, the Compass actually bests the larger, more expensive Cherokee in a number of key areas. For starters, it has more cargo volume: 27.2 cubic feet of space with the second row seats up, or 59.8 cubic feet when they’re folded flat, compared to 24.6 and 54.9 in the slightly larger Cherokee. The Compass also offers more front head- and legroom.

The Compass easily bests the Renegade and Cherokee as far as driving dynamics are concerned.

Sitting inside the Compass, you’re greeted with materials and patterns familiar to anyone who’s been in a recent Jeep model. There’s nothing breathtaking here, and it feels a lot like the Cherokee. Cloth and leather upholstery are available, you can get a giant sunroof, and the top-end Limited model comes packed with every single nicety you’ve no doubt come to expect in the compact CUV segment. On the infotainment front, Jeep offers its UConnect system with 5.0-, 7.0-, and 8.4-inch touchscreen interfaces, and the latter two can finally be had with Apple CarPlay and Android Auto compatibility.

The Compass undercuts the Cherokee by several thousand dollars, trim for trim. My advice is, unless you like the design of the Cherokee or need that little bit of extra off-road capability, just go for the Compass. A Sport 4x2 starts at $20,995, with all-wheel drive costing an additional $1,500. A step up from there, Latitude models start at $24,295, the Trailhawk arrives at $28,595, and a loaded Limited 4x4 sits at $28,995, not including $1,095 for destination. All-in, Jeep says a Limited model with all the trimmings will top out under $35,000.

Pricing numbers are in line with this Jeep’s closest competition, but no competitor can touch the Compass on curb appeal. While entries like the Ford Escape and Honda CR-V are attractive and modern, the Compass looks like a Jeep, and for a lot of folks, that’s hugely important. Consider this: A friend of mine bought a brand-new 2016 Compass a few months ago, and when I asked her why, she said, “Because I wanted a Jeep.” Now, that certainly doesn’t represent all 216,000 people who bought a crap-box Compass or Patriot last year, but those buyers have to go somewhere, and I’ll bet a good majority of them will find a lot to like about this 2017 model. Or maybe they’ll just buy a Renegade.

Either way, the new Compass is sure to pull a lot more people into Jeep showrooms than the old model ever did. It fits perfectly within the brand’s current lineup and offers a compelling argument against buying something more traditional like an Escape or CR-V. Once you’re inside, the Compass impresses with good handling characteristics and plenty of functionality. Simply put, it’s exactly what you’d expect from a compact crossover with a Jeep badge on the hood. Get ready to see these things everywhere.