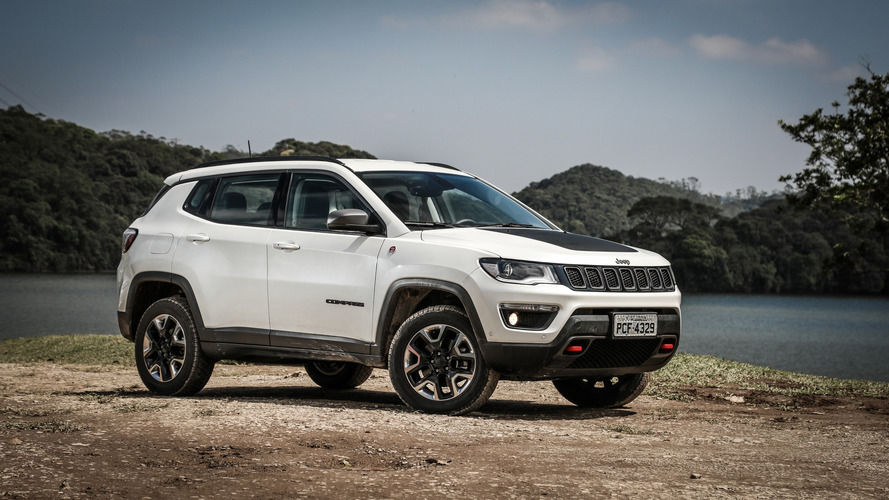 Motor1 Brazil has already tested the new Compass; we translate and report their findings.

One of the huge advantages of the Motor1 global network is that we’re building teams all around the world. Today, we bring you a very early look at Jeep’s brand-new Compass. Here in the U.S., this model just debuted at the L.A. Auto Show, but the Brazilians have already gotten their VBox on it. Enjoy the preview, and expect a First Drive of the North American version in the not-too-distant future.

Among all SUVs that have invaded the Brazilian market, Jeep has achieved prominence. After making the Renegade a sales success, Jeep has now launched a very aggressively priced second-generation Compass. In fact, this new Compass would seem to have few rivals. It competes in price with C-segment offerings in its entry-level trim and offers a diesel engine for an amount of money that no competitor can beat.

The Compass would be competitive on those attributes alone. But it is also built over the same platform of two already-successful models (the younger brother Renegade and the Fiat Toro pickup, said to be the future Ram Rampage). The platform is FCA’s Small U.S. Wide, and was created for off-road applications from the start, and a factor for potential success in many markets.

We had a brief test drive on the diesel and flex-fuel models, back at the Compass’ Brazilian launch, in September. This time we would get a more comprehensive test, with the chance to get the Jeep to show its deepest secrets by way of our test equipment. Yes, Motor1-Brazil is now testing vehicles, with a VBox Racelogic GPS Datalogger. Jeep sent us the Compass' top trim, called Trailhawk. It certainly will not be the best-selling derivative, but it was a perfect fit for us evaluate all the equipment offered on the model, such as adaptive cruise control (which brakes the SUV by itself when approaching the car ahead), parking aids and, blind-spot alerts.

Anyone who gets to drive the Compass after driving the Renegade will find a quieter, more comfortable car.

Anyone who gets to drive the Compass after driving the Renegade will find a quieter, more comfortable car. Compared to its smaller sibling, Jeep said it paid more attention to sound insulation on the Compass, in addition to calibrating the automatic gearbox for softer shifts and the steering to be lighter. The wide range of gears allow you to make good use of the available power, especially in the engine’s mid-range, so the experience never really feels like driving a nearly 3,800-pound SUV. That steering is well calibrated: light in maneuvers, it gets progressively firmer as the speed increases. But, regarding the noise, this is still a diesel-powered SUV, and that gets clear at higher revs or if you drive with windows a little open.

The Compass did fall short of the Fiat Toro Volcano pickup in our performance tests. Its acceleration from 0-62 miles per hour took 11.5 seconds, while the Toro made it in 11.2 seconds. In terms of passing acceleration, Compass took 8.9 seconds to go from 50 to 75 mph, where Toro's time was 8.1 seconds. On braking there was one Jeep victory: The Compass needed 138 feet, 5 inches to fully stop from 62 mph; the Toro needed two feet more.

Overall, they were reasonable numbers for the Compass' proposition. What we missed the most was a more prompt reaction under heavy acceleration, certainly contained by a more conservative transmission and throttle mapping. Anyone who seeks a sportier reaction will have to choose a turbocharged rival (usually front- or rear-wheel-drive only) or to spend much more on an imported turbodiesel premium model.

In back, the advantage of the Compass' 2.4-inch-longer wheelbase is clear, delivering good accommodation even for adults approaching six feet.

In terms of fuel consumption, the newcomer also struggled to repeat the numbers of the Fiat pickup. Compass achieved 21.2 miles per gallon in the city and 32 mpg on the open road. The Toro achieved 22.3 mpg and 35.3 mpg, respectively. It is worth mentioning, however, that other Compass trim levels should achieve slightly better numbers, since the Trailhawk is heavier and has higher aerodynamic drag due to the larger frontal area. While cruising, the ninth gear, a very long one, allows you to travel at less than 2,000 rpm, with no noise.

This trail-lover version adopts a firmer spring and damper setup, due to the lifted suspension. It transmits a very solid feel when dealing with obstacles, both on tarmac and dirt roads, allowing for relaxed driving independent of the harshness of the terrain. When going through a bumpy road, however, it will bounce more than the base Compass. Such stiffness is necessary to contain body roll in curves, where the Trailhawk rolls a little more, but not enough to frighten the driver. Still, we prefer the handling behavior of the 2.0 Tigershark model, with its lighter load at the front and lower center of mass.

Inside, the Compass presents a pleasant finish. There are soft-touch materials and a showy dashboard, which in this trim comes with a complete on-board computer with a configurable seven-inch screen. In addition to that, you can control various functions, from radio to air conditioning, through the 8.4-inch touchscreen infotainment system (unfortunately with no Apple CarPlay or Android Auto compatibility in Brazil). A nuisance inherited from the Renegade is the high volume of the door's lock/unlock beeps, which will alert all of your neighbors when you arrive or leave home.

It's a real SUV with real off-road capability.

The space in the front seats is similar to that of the Renegade, with the difference being that the windshield leans in closer near the roof. In back, the advantage of the Compass' 2.4-inch-longer wheelbase is clear, delivering good accommodation even for adults approaching six feet. The cargo space is not as big as we might have guessed by the size of the car, but the 14.5 cubic feet offered aren’t so limiting for family use as the Renegade's 9.2 cubic feet. On a day-to-day basis, the Compass feels rather big, mainly because of its long hood ahead of the driver. But in practice it’s about the same size, with the same room, as an average C-segment hatchback.

By the end of our testing week, there was no question the Compass is a good deal. Maybe the best option in the category in terms of value for money because it's a real SUV with real off-road capability. Though that doesn’t necessarily hold true for this pricey Trailhawk version. For use on asphalt (which the greatest number of people will do, most of the time), the biggest rival for the diesel-powered Compass is the gas-powered option, which costs a lot less with the same level of equipment.