A marvelous fullsize luxury SUV made so-so by its plug-in hybrid system.

Volvo needs a trophy room at its headquarters in Sweden for all the awards the XC90 has won, including North American Truck/Utility of the Year, Motor Trend SUV of the Year, and an Automobile All-Star award. Those are just a few of the honors it has won in the United States; the rest of the world has gone ga-ga over the XC90, too. So I was eager to drive one, and thought a loaded XC90 T8 Inscription plug-in hybrid model would be ideal to test. What I discovered is the attributes that make the XC90 so revered are all there, but all of those awards should come with an asterisk: Excluding the plug-in hybrid model.

Nice duds. The XC90 would easily win the tiara in a beauty pageant with its German and Japanese competitors. When designing large SUVs, most luxury automakers stretch their brand’s familial design elements to fit over these larger frames, but Volvo kicked off its new design language by introducing it first on the XC90. That confidence is well placed, as the vehicle looks expensive from every angle. The design is refreshingly filigree-free and the whole package wonderfully balanced in proportion. It’s Scandinavian by nature but progressive by design.

Interior sparkles. Based on the quality of materials inside the XC90 and how they’re assembled, I’d rather buy my next furniture set from Volvo than IKEA. This particular XC90 Inscription (Volvo has odd trim level names that also include Momentum, Kinetic, and Excellence) features Linear Walnut Wood that looks genuine and has real texture on closer inspection. All the shiny parts are real metal, not plastic. And the gorgeously tanned Nappa leather upholstery looks great everywhere, including on the key fob. The cherry on top is the Swedish-sourced Orrefors crystal glass shifter. Underbar!

Swedish seats. I drove the XC90 over six hours in a single day and felt fresh as a daisy after exiting the driver’s seat. While this loaded tester did come with massaging seats, I never needed them because the seats themselves are so well designed. They’re not cushy; rather, they’re supportive in the right places so your body doesn’t feel extra pressure on any one area. The rear seats are equally good, with a thin design that donates leg room back to passengers, especially in the third row.

Infotainment supreme. Considering how few physical controls it presents the driver and front passenger, the Sensus infotainment system was a big gamble for Volvo. It pays off nicely. The nine-inch, vertical display creates a striking first impression, similar to giant displays inside Teslas. From there you feel a glass, capacitive touch screen that reacts to your inputs in a familiar way like a tablet. There are a lot of vehicle functions contained within the system, but the menu structure, which is based on three “pages” that you swipe between, is easy and intuitive to navigate. 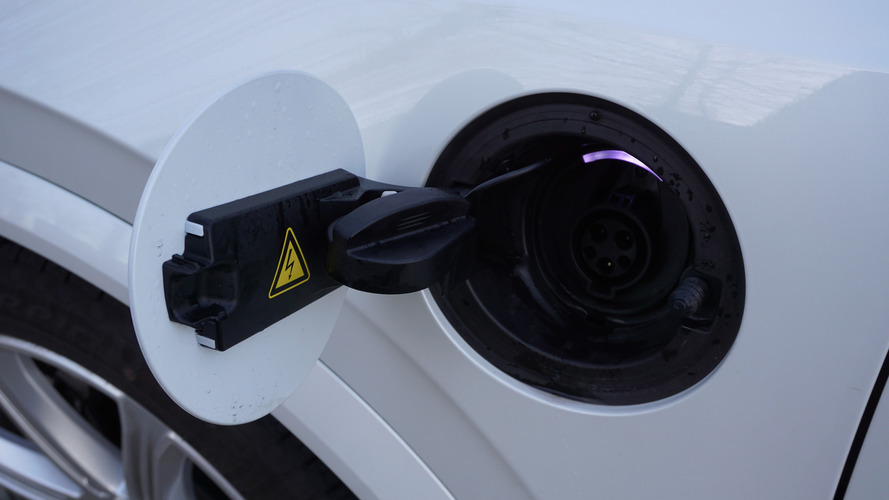 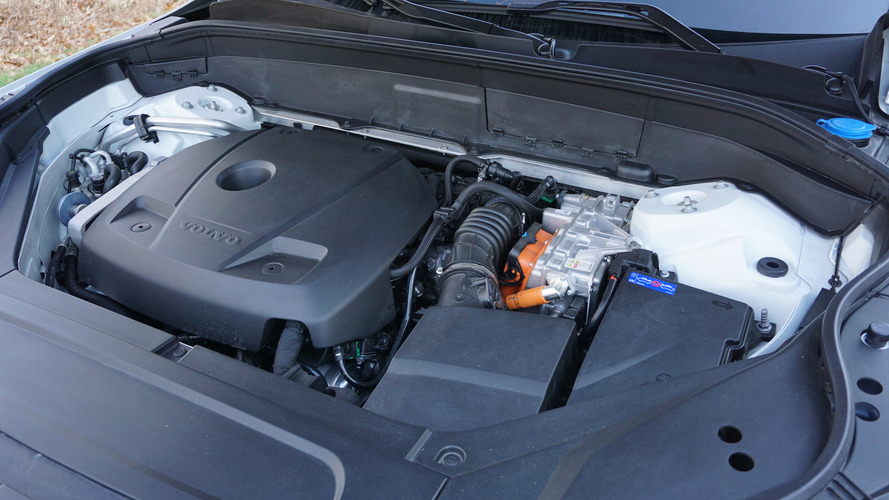 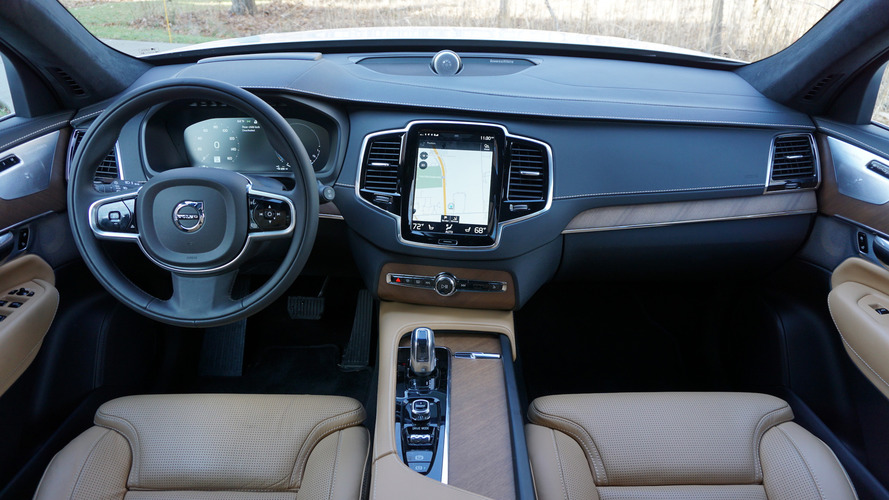 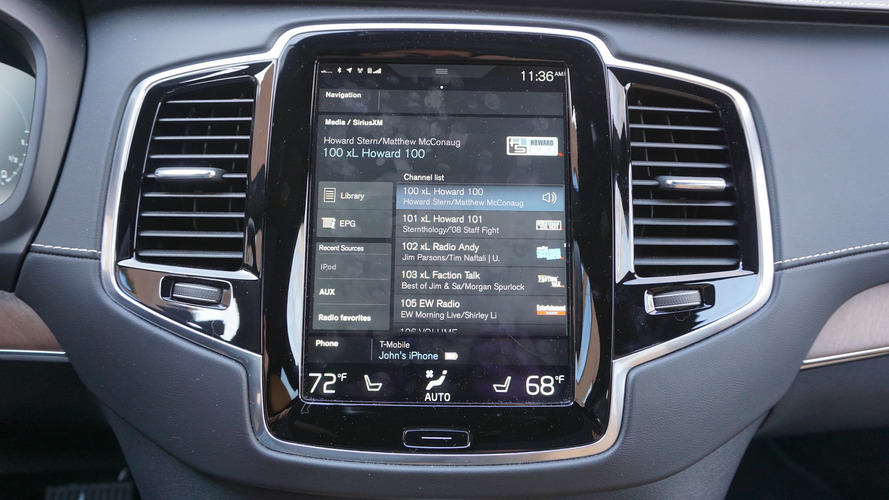 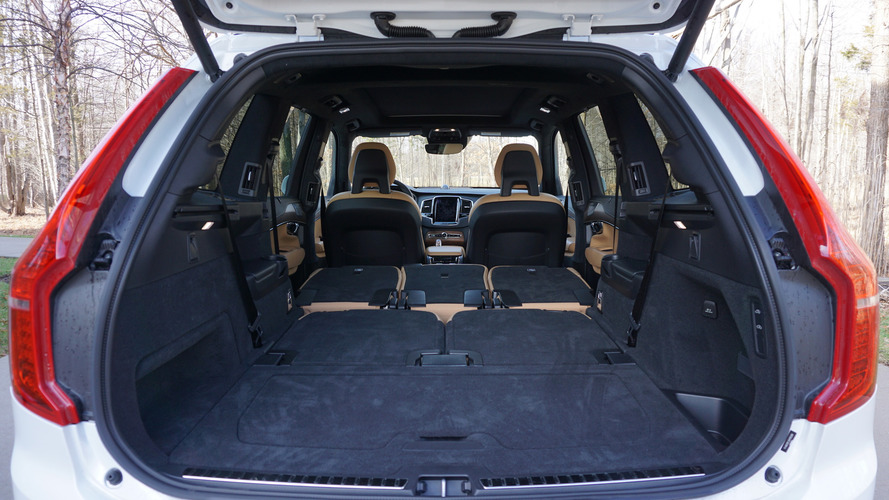 Runs out of range. As good as the XC90 is, I won’t applaud Volvo for making a good version of a weak plug-in hybrid. Thirteen miles of range is barely enough to get an errand done in most American suburbs, and I never managed to reach the maximum range anyway. After that’s gone, the XC90 acts like a normal hybrid, returning only 25 mpg combined, which is just 2 and 3 mpg more than its other two non-hybrid models and 5 mpg fewer than a traditional hybrid Lexus RX 450h. If eco-consciousness is your main motivator, look at the all-electric Tesla Model X.

Less power than advertised. Volvo claims the XC90 produces 400 horsepower, which it gets by adding the 313-horsepower output of the SUV’s gas engine with the 87-hp output of its electric motor. 313 + 87 = 400; voilà! When standing on the gas, though, it doesn’t feel like the XC90 is marshalling 400 horses. That could be because it weighs over 5,000 pounds and not even that much power could make something so heavy feel fast. Also, when automakers quote the combined power output of their hybrids, they don’t add the two numbers together like Volvo has done because peak power and torque from each source happens at different times. I’d love to see the XC90 on a dynamometer to measure the power it’s really putting down, because it feels less than advertised.

Harsh hybrid handoff. Because of the complexity of mating a gas engine that’s turbo- and supercharged with an electric motor, the XC90 Plug-in Hybrid’s driving demeanor can be far from smooth. Nearly all of the harshness, though, comes from the handoff between its electric- and gas-powered drive systems. The dual turbo-supercharger setup works flawlessly, delivering a linear progression of power through the rev band, but in those moments when the XC90’s computer brain decides to blend power from both propulsion sources (gas and electric), the handoff can produce a sudden jolt and shudder. This operation is never perfectly polished in hybrids, and maybe the XC90’s considerable weight makes it more pronounced than in a Prius. That said, I expect better manners in a luxury SUV costing nearly $90,000.