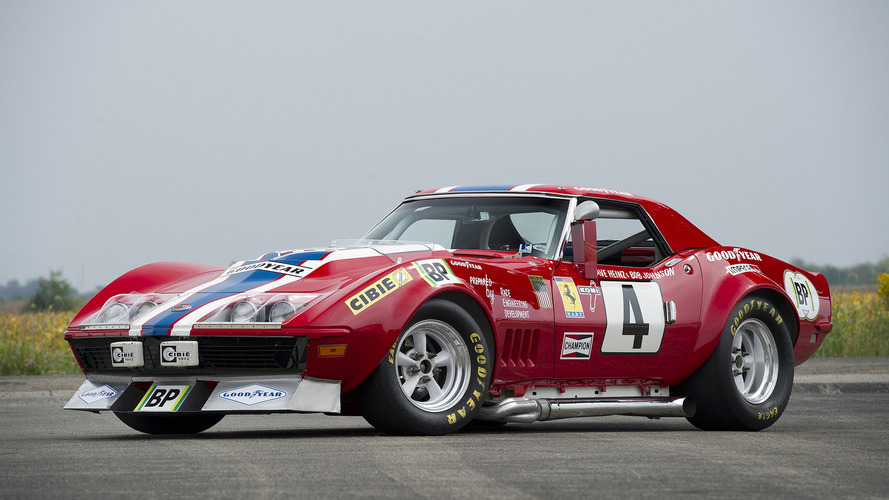 If you don’t already know the story of how two giant names in racing joined for an unlikely alliance, you might not believe it.

Remember that time a Corvette pretended it was a Ferrari at Le Mans? Not many people do. In fact, the 1972 race should not have been remarkable. Icons like the Porsche 917 and Ferrari 512 had been retired. But although the war between the manufacturers had cooled, a corporate battle in the USA would lead to an odd pairing with a Corvette disguised in cavallino clothing.

The story goes back to the muscle car wars. By 1972, so much competition-worthy horsepower was on the streets that even the tire companies believed winning on Sunday would create sales for Monday. Goodyear and BF Goodrich were both vying for supremacy with new racing radial rubber, and both American companies made sure they were winning using an American hero, the Corvette.

BF Goodrich had the advantage of sponsoring a well-funded team backed by John Greenwood. Goodyear threw its support behind Bob Johnson and Dave Heinz in the Race Engineering and Development (RED) team L88 Corvette. They actually had more success than Greenwood’s car, including beating him at Sebring with an overall GT class victory.

The new racer was built from a wrecked 1968 Corvette convertible purchased for $600.

The winning record of the RED Corvette had earned an invitation to the 24 Hours of Le Mans in 1972, but there was a problem. The car also earned the nickname “Old Scrappy” due to the hodgepodge of pieces that went into rebuilding it after every round of heavy competition. This put the Corvette far outside of the rules governing the amount of factory parts required in the GT class. But Greenwood was going to the Circuit de la Sarthe, and the RED team and Goodyear were not going to relinquish the international spotlight so easily.

With only eight weeks to Le Mans a new car was prepared.

The new racer was built from a wrecked 1968 Corvette convertible purchased for $600. The condition of the donor was of less concern than getting the correct year. Corvettes that competed during this era were older '67-'69 models because this was when Chevrolet offered the L88 package. Essentially a factory-built race car, the L88 option code upgraded the suspension, brakes, and clutch as well as installed an aluminum head 7.0-liter V8. The power was advertised at 430 horsepower, but it was an open secret that it produced much more. So the donor received a new frame, FIA-spec flared fenders, new GM-spec drivetrain components, and most importantly, a thundering L88 heart. Of course the Le Mans invite did not extend to this new car, so Goodyear went to have a chat with an old friend.

Luigi Chinetti’s North American Racing Team (NART) was basically an extension of Ferrari’s racing program that reached across the Atlantic. NART was well established at Le Mans, and Goodyear had become its preferred tires. Chinetti had a space for a reserve car that Goodyear saw as an open spot to get its Corvette into the race. No matter if the tire maker used goodwill or threats, the end result was the ‘Vette was accepted into the fold. Painted in red and given official NART livery decals, this unique prancing horse wore a bow tie.

Getting into Le Mans proved to be only half the battle. During the practice rounds, the junkyard Corvette now known as NART No. 4 had a 100-mph crash when an advertising banner fell on the track. With few spares on hand, the team relied on wood and duct tape to help rebuild the nose. The slap-dash repair withstood the weight of a track marshal – a.k.a. the measured entry test – and so the car was allowed to compete.

Barely in the race, Johnson and Heinz still needed a few more miracles to stay competitive. The 24 Hours at Le Mans is grueling for any car, and this one was injured from the beginning. The wounded front ensured the Corvette could never run at full speed. The pre-race accident had also injured the fuel filler neck, wasting precious time with longer refill times in the pits.

Aside from being the ugliest Ferrari entry to limp around the track, No. 4 proved to be a good competitor.

Aside from being the ugliest Ferrari entry to limp around the track, No. 4 proved to be a good competitor. It finished fifteenth overall, seventh in its class, and set a Le Mans record for Corvettes that would last for over two decades. The two Greenwood/BF Goodrich cars had failed to finish, making the result even sweeter for Goodyear.

While most race cars live a short life before being used up and discarded, the former Le Mans Corvette had a longer career than an All-Star pitcher. It was rebuilt and modified to comply with whatever series it was utilized. This continued until 1995 when the car's new owner, Mike Yager decided it was time for retirement.

The tired racer was shipped to Kevin Mackay at Corvette Repair, Inc. to be restored to the exact specifications from its days at Le Mans. Mackay’s reputation in the Corvette community is legendary, including resurrecting a Briggs Cunningham 1960 Le Mans Corvette.

A period-correct V8 was installed and blueprinted to get around 660 hp.

Mackay stripped the car down to the bare fiberglass and started from scratch. A period-correct V8 was installed and blueprinted to get around 660 hp. The abundance of available parts makes rebuilding a Corvette an easy task compared to a more exotic marque. But for Mackay, recreating the oddities of a race car is where a restoration becomes the most challenging.

He discovered items that make this car truly unique. For example, when the No. 4 Corvette showed up to Le Mans in 1972 without carrying the mandated emergency tire, the team threw one in that was liberated from a policeman’s Peugeot. The lights for the racing numbers came from a Triumph TR6. BP stickers were hastily applied over the TWA sponsor logos after the airline pulled out following the fiery qualifying crash.

This very detailed restoration was completed in the late 1990s. Since then the car has been maintained in running condition and spreads its unique story at events around the USA. When not on the road, it has a home at Yager’s Mid America Motorworks in Effingham, Illinois, where the on-site museum houses other rare racers and prototypes.

The NART Corvette is one of the most interesting oddities that could never be repeated.

This weekend the facility is open to the public as part of Corvette FunFest. On display are other great projects like the 1964 Chevrolet concept XP-819 and a rare big tanker 1963 Z06 split-window coupe. As these newer arrivals complete restoration, they are vying for space in the rotating collection. So while Yager hasn’t tired of the Testa Rossa Corvette, after more than two decades of ownership, it might be destined for a new home (it even tested the waters at auction last year).

That’s why it’s important to pay attention to this one now. The NART Corvette is one of the most interesting oddities that could never be repeated. Describing how the stars aligned for this car is like being a name-dropper at parties. It’s a Corvette that was rebuilt to be a Ferrari just so it could set Le Mans records on Goodyear tires. But more than ego, it’s a symbol of true racing grit where victory only comes to those who refuse to die.