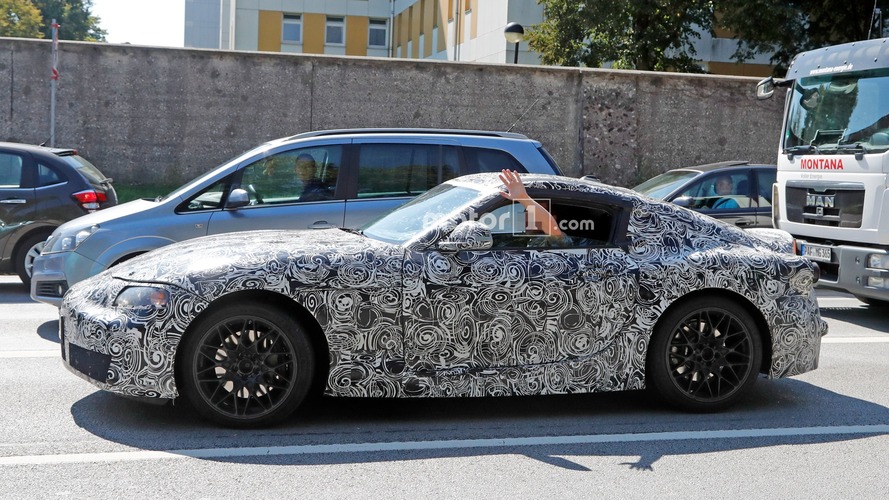 The waiting is over – we have the first batch of spy photos of the upcoming new Toyota Supra. The flagship sports car for the Japanese company is expected to arrive on the market in 2018 with a possible debut next year.

So far we’ve been dealing mostly with rumors about the new Supra, but finally there’s a prototype on the road performing preliminary tests. The photographed vehicle wears plenty of camouflage, so it’s a bit difficult to figure out more of the design details, but at least we can take a look at the overall shape of the coupe.

Comparing it with BMW’s side of the jointly-developed project, the Z5 roadster, Toyota’s car is a slightly smaller coupe vehicle with shorter overhangs and more sharply sloped roofline. We also noticed a small fixed rear wing at the back, and a dual exhaust system, similar to the one on the GT86.

Judging by the camouflaged shapes at the front, the production Supra could borrow the FT1 concept’s strong center nose, flanked by large air intakes. The long bonnet could be hiding a turbocharged BMW-sourced six-cylinder petrol engine, some speculations suggest. However, some reports also say the Japanese engineers could install a hybrid system, as a new hybrid turbo engine is currently under development at the company.

Probably the most interesting but dubious possible option comes from a report from 2014. Then, Japan’s Holiday Auto magazine reported Toyota could use a 2.0-liter four-cylinder turbo engine from BMW, supported by two electric motors in the front and one in the rear for a combined output of 354 horsepower (260 kilowatts).

Back to the photographed prototype, likely only a test mule, it clearly uses a BMW-adopted interior, featuring many familiar elements, like the steering wheel, the instrument cluster, the infotainment system controller, and even the center console – all seen in production models from the Bavarian brand.

That’s literally everything we know about the new Supra so far. Hopefully, more details will become available closer to the vehicle’s official debut sometime next year.